For my miniatures sale back in August I really wanted to have some sets of dog items. All I managed were a few dog biscuits. I don't know if the weather was just too hot when I was sculpting them, but they were incredibly challenging and time consuming to make. I tried, and failed, multiple times to sculpt a master copy of a dog bowl that I would then be able to make a mold from. With the challenges, and failures, I decided to scrap all the rest of the plans for the dog sets.
Recently I had the thought that a 3D printed dog bowl would be absolutely perfect. I contacted Kari of HandcraftedByKari on Etsy, to ask if she could make a 1:9 scale dog bowl. And if she would be OK with me reselling them in sets. Not only did she come up with a prototype that day, she was fine with me reselling. So I finally had the confidence to move forward with the project. Not to say I have not had other set-backs. There are usually some when prototyping things.
One thing that did work out, on the first shot, was my dog beds. I really like the big, flat pillow kind, this is what we usually bought for Abby when she was with us. I found some reasonably priced, fairly thin, flat cushion foam, and made the coverings for them. I have actually made a dog bed cover like this in full scale for a friend of mine years ago. She wanted an extra large bed for the dog, and stores just did not have what she wanted. She wanted to take the flat bed, and a couple of couch cushions, and have a cover made for them that would keep them all together. I measured and then just hoped everything I thought would work would work. And it did. Doing it in miniature was quite a bit easier! 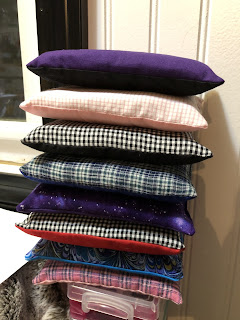 We tried out some new bread the other day. Ethan wanted to have bread for the burgers we were making. I found a very promising recipe. It was also very complex and very time consuming. It did turn out well, though it was much denser than I would have liked and didn't rise as much as I would have hoped. Maybe my eggs were too cold, I know the yeast was perfect. If you are interested in a low carb roll here is the recipe. My suggestion is if you decide to make them, make sure you just leave your eggs out for most of the day and follow every instruction to the letter. 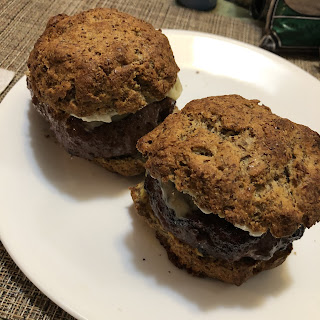 I also got in some more prizes for the Field of Dolls Online show. These were made by Dani Youdris. One side says Field of Dolls and the other says 2020. I am not yet sure how these will be awarded. I have that problem with a lot of the prizes. I may have to take them all out (and get an epic photo!) and see if I can figure things out with them. 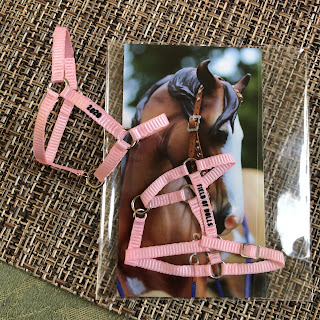 I have been super busy lately and sort of feel like I am being chased. And I know I have brought it on myself. I do not NEED to have a certain amount of things done for my live sale, not really. I have just made a goal and am trying really hard to reach the goal. It is tricky when the goal keeps getting tweaked. I keep thinking of more things I forgot I still have to do. My to-do list keeps on growing instead of shrinking. But I will either make all of the things I have planned, or I won't. That is pretty much how it will go. If I do make all the things, yay! If I don't, whatever. There will be other sales. All I can do is my best. In all things.

How did the tack maker of those halters do the lettering? I've been trying to figure out something like that, but don't know how.