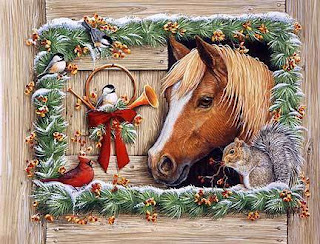 Twas the Night Before Christmas (hobby style)
Written by Joan Yount and Anne St.Onge
T'was the night before Christmas, and all thru the halls, not a model was stirring, not even the dolls...the dremel and tools were all hung up with care, the doll heads on pencils with new viscose hair

The resins were nestled all snug in their pouches
While the wrappings from new models were thrown on the couches.
And ma in her studio and I in my shop
Had just finished work and were ready to stop.

Then from the studio arose such a noise – I looked at my cats and said OK, boys,
I know there are six but I only count 5 – who’s in the studio, land sakes alive!
I rose from my bed and flew into the room and removed little kitty before things went boom.
So I went back to bed and waited for Kringle – but all I could hear was the dog’s collar jingle…I drifted away into a sweet sleep, thinking which models to sell, which models to keep…

When, what to my wandering minds eyes should appear,
But a show string of minis, I could see them so clear!
With a Mindy a Flitwick an Aten a Breezy,
A decision like this sure would not be easy.
I knew in a moment I needed assistance
My tiny collection would not go the distance.

The jolly big man in his bag, I am betting
(because we all know it’s not the having, it’s the getting)
Are saddles, bridles, tiny blankets and more
To load our already-full shelves galore

From the floor to the ceiling tiny tack and props of all kinds,
Look at these horses, they’re dressed to the nines!
I look all around at all the beautiful things,
All the time wondering what Father Christmas will bring
A halter is needed, a cart, and a jump…
When suddenly I hear a loud thump!
Up on the rooftop, a familiar sound
Could it be Santa, so jolly and round?

Oh wait, it is! I hear my heart race – to peek from the corner to see his back brace
From carrying the heavy, model-horse sack,
Filled with horse goodies, new dollies and tack!

And then for the horse room I dashed with an inkling,
That Santa would be there in less than a twinkling
As I jumped from my bed and was turning around,
Down the chimney St. Nicholas came with a bound.
With his high shiny boots he was dressed for the hunt,
And his warmblood was stomping and stamping out front.

There were breyers and stones and resins and minis,
Little horses so real I could hear all their whinnies
With a wink of his eye and a tip of his hat,
And a few little sneezes (he’s allergic to cats)
He straightened up tall as he emptied his treasure
Knowing he gave me joy beyond measure

Then he shot up the chimney and jumped in his sleigh,
And I grinned to myself from the joy of the day.
As I heard that kind man preparing to depart ,
I ran to the window to see him get his start.
And he started the team with a jump from the roof,
And I caught a glimpse of more than a hoof.

Why a group of fine long-ears were Santa’s flying team,
I blinked my eyes in surprise, this must be a dream.
I figured this must be a joke or a game,
But as they started out he called them by name.
On Cricket on Gulliver on Kit and Cleopatra,
On Calliope, Big Jake, on Jasmine and Lola.

On that cold winter night as they flew through the air
I looked at the presents arranged with such care.
I hoped Santa Claus would have a good trip
(and I was secretly hoping I got my new resin Chip).

But I heard him exclaim, ‘ere he drove out of sight,
"Merry Christmas to all, and to all a good-night!" 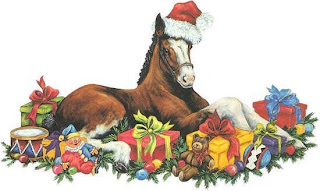 Posted by Field of Dolls Studio at 6:28 AM No comments: