Last weekend was Southern New England Winter Round Up (SNEWRU). I planned on entering the show ever since I found out the hostess, Brenda Bednar, had added performance. I forgot to enter and forgot to enter and then remembered to get my entry in about 2 weeks before the show. Then for the last two weeks before show day I meant to work on show prep.
It didn't happen.
Sunday was the day that AR.CM performance was held and I spent several hours on Saturday working on tack fitting in preparation for the show. Two horses, three tack sets each and somehow hours of tack fitting. 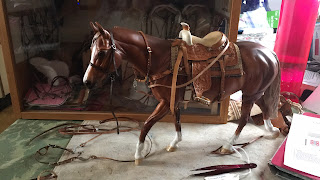 Show day arrived and I showed up right when the hall officially opened. I had to get Caramel Latte's new harness fitted to her. Kate Dwyer made it for me and we didn't have a chance to get together before the show for the fitting. My cart has some unusual features so the set-up isn't perfect just yet. Still it's a good start for a work in progress. 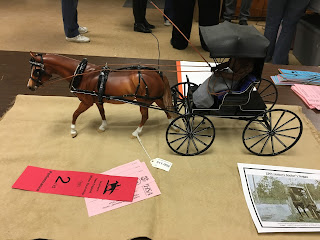 Caramel Latte's next class of the day was showmanship and I was super nervous. Showmanship is my thing and I try very hard not to screw it up. Once in awhile I screw it up though so I was concerned that I would mess it up again. Once the class was pinned I relaxed. This wasn't a bad start to the day at all! 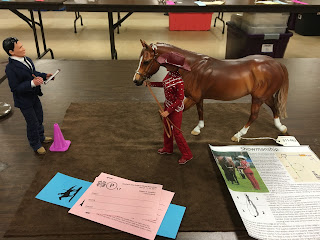 Caramel Latte next went into the Other Costume class with this parade entry. The costume was made by Wendy Ward and was actually made to fit on Matriarch. The fit is not perfect on Latte but it's not bad. This time I had some proper documentation for the entry, which was something I was missing the first couple of times I showed this set. I was very pleased with this placing, the class wasn't super huge but it was not super tiny either. 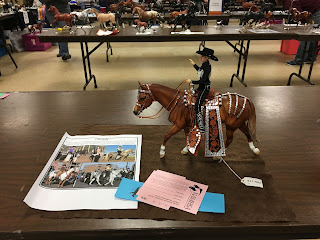 Next was the other performance class. Since that means no English or Western I decided to do in-hand trail (which sort of is western but not necessarily). The doll decided she wanted to fall over and her drunk look dropped them down to third place. Silly doll. 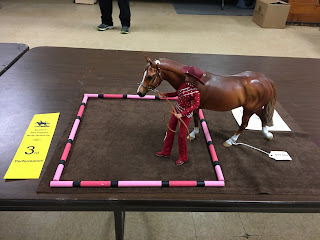 I fixed her to take a proper photo. 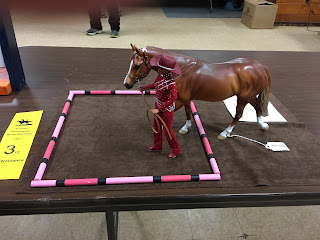 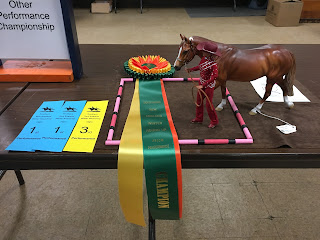 Up next was the English division and the first class for Three Day Bender. Originally I was thinking that I would just show Caramel Latte because it sounded like a somewhat relaxing show day to just show one horse. But Tippy came to the show. She got second in Hunter over fences/Jumper and didn't fall over or even try. 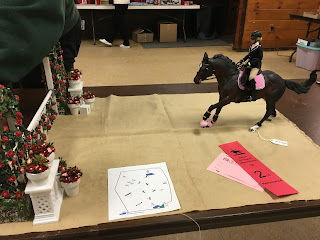 Next was English games. Three Day Bender did the Housewife Scurry game. She does well at this because she is moving at a good pace and fairly straight. The judge liked that in the bucket I had the correct fruits and vegetables that were supposed to already be in there. Sometimes I am good at remembering the details. 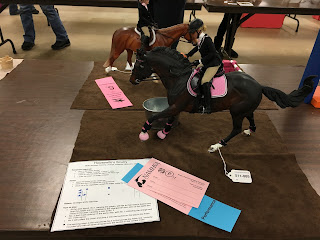 Caramel Latte did a Musical Stalls entry which just wasn't as interesting so she only got fifth place. 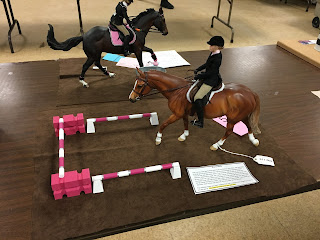 Next was western trail. Three Day Bender struggled with a pattern that she just isn't shaped right for. Plus in my effort to make the poles fit on the footing it looked to the judges like I had an X shape instead of the plus sign shape it is supposed to be. Tippy was not likely to do well with this entry no matter what. The pattern isn't a good fit for her. 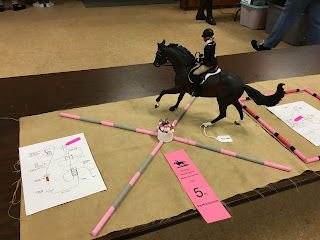 Caramel Latte had better luck in Arena English trail. She didn't fight the pattern at all. 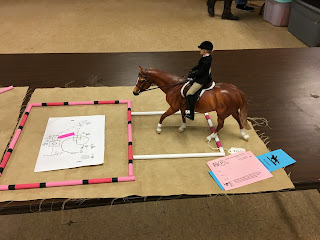 Next was Other English. Three Day Bender sat out this class and Caramel Latte brought back my therapeutic riding entry. It's been awhile but my little Travis doll still works really well for this. I quickly shortened the stirrups with sticky wax and hid the evidence under the doll's legs. It worked out really well. And all the dolls stayed standing the way they were supposed to. 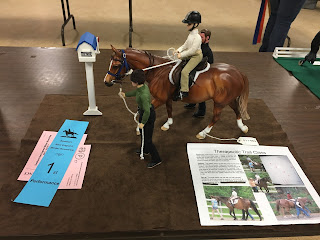 Next was Dressage and Tippy isn't really a great dressage horse. But I figured I would try it anyway since Caramel Latte is also not really a good dressage prospect. Not bad for a horse that really shouldn't be in the class. 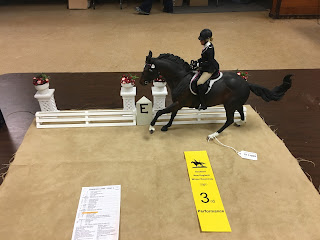 After that was Huntseat/English pleasure. Caramel Latte managed third and Tippy being not actually appropriate for pleasure didn't place at all. 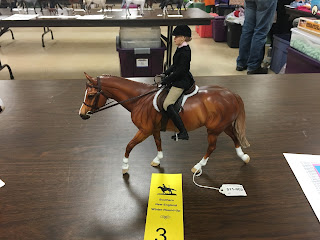 Caramel Latte ended up being reserve champion in the English performance division. 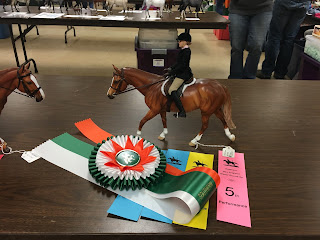 Next up was cutting/roping. I have always done roping with a standing horse so I wasn't sure how Caramel Latte would do with it. But the end of a roping run the horse needs to walk forward and loosen the slack on the rope and wait a few seconds to see if the calf will stay tied. I put a card next to my documentation saying that was what was going on and had all the other roping details correct so it all worked out. 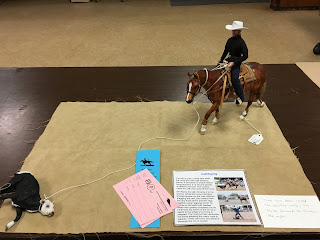 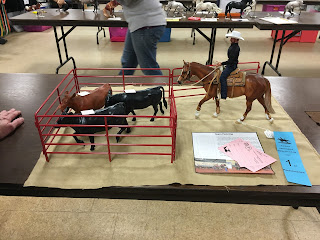 Three day Bender's working cowhorse entry. It was just my entry against my entry in the class or Tippy night not have done as well. The way Tippy is and the way the cow is the cow would likely get run over when he took his next stride. It happens... 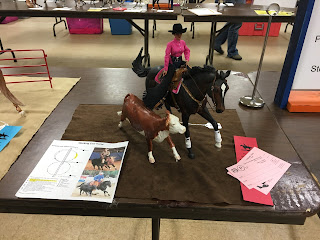 Latte didn't have an entry in other western but Tippy went in with this Extreme Cowboy entry. I can't remember now if the judge said I could have improved it in some way. I am sure she said something. Karen Pajak judged western and she is a very tough judge. She has a fantastic eye for detail and when I mess up she lets me know. She is wonderful to show under because she makes you look at details you may never have thought of or even noticed. 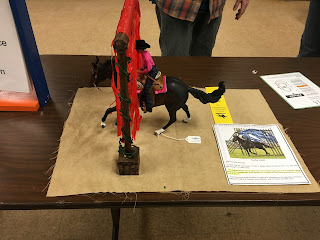 up next was western games. Caramel Latte did the two barrels and a pole game. She managed third with it. 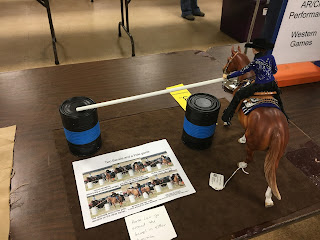 Tippy went in with the Housewife Scurry again. Something was wrong with the entry. I think one side of the bridle was sort of loose and floppy looking. Karen is a tough judge but she makes you look at the details. 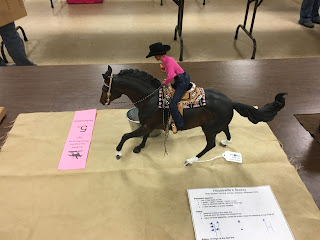 Up next was Arena western trail. Three Day Bender had a better time with this pattern though isn't still not perfect. 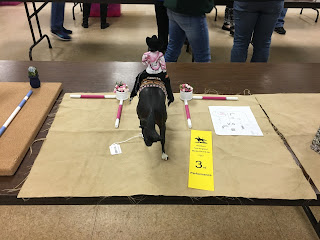 Caramel Latte did her gate entry that she has done many times. Karen pointed out that the obstacle is huge and super simple to do. I have been showing this entry for years and it's done very well under several judges. However Karen is absolutely right so I came home and shortened the gate rope. Now I want to show Caramel Latte again. 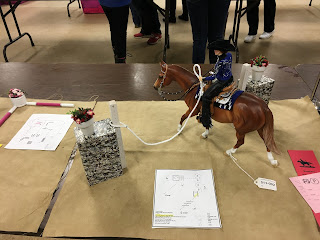 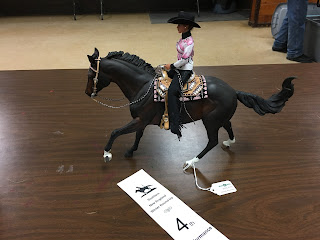 But Caramel Latte is. I fiddled with this entry so much to make sure everything was where it was supposed to be. It paid off. 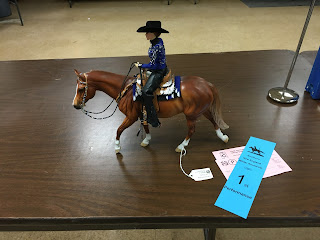 In the end all the fiddling and focusing earned Caramel Latte Western champion. 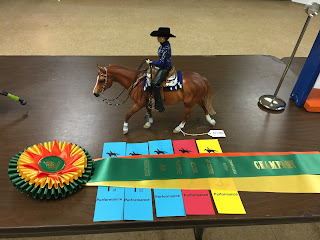 And then with other performance champion, reserve English champion and western champion under her saddle Caramel Latte earner overall performance grand champion! That is easily the largest rosette I have ever won. Latte also has a model horse sized neck sash and the cool trophy. What a great day Latte had! 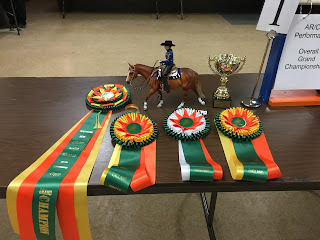 In the end Caramel Latte won champ or reserve in 3 out of the 4 sections she showed in, overall performance grand champion and 9 NAN cards. I had a friend take this photo so I can keep up with making it a thing. Jennifer Buxton said she hopes this will become a thing and I agree with her. I will likely end up recycling the 3 divisional rosettes (where can I put them after all?) and just keeping the overall awards. But it's nice to have a photo of me with the winner. Tippy could have been in this photo with her ribbons as well but I decided that just Latte would be in this one. She had a very excellent day. And with all of the new NAN cards Caramel Latte qualifies for the NAMHSA performance Legacy award. I am still thinking about whether or not to let her just get that or retire or if she should keep showing this season and go for the Performance Hall of Champions Award. She needs 50 NAN cards for that one. I think she currently has 39 or 40. 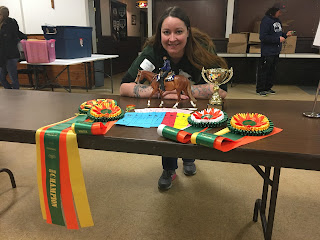 I got a new job recently as a paraprofessional at the high school in my town. It's an amazing job and I get to work with some really great kids. Some of them are challenging and at times make me crazy but in general the job is fantastic. I cut back on dolling a bit and my hands thank me for it. I am loving the new job but it was great to be submerged in hobby fun for the day last Sunday. It's always a good time when I see my hobby people.
Posted by Field of Dolls Studio at 9:40 AM 3 comments: