Yesterday was the who-knows-what-year-we-are-on of the New England Performance Challenge. It is an awesome performance show held each October by Nancy Timm. I haven't gotten to do a ton of performance showing recently so I was really looking forward to this show. I volunteered to judge the Novice division but because of a last minute cancellation by another judge I also ended up judging OF harness and OF English. So my focus needed to be mostly on judging and showing could happen if I had enough time, my focus of the show changed a bit.
First of all I had to show my Mule, A Little Mayhem, in a bunch of English classes. She got new custom made-just-for-her tack from Jennifer Buxton so she had to come out. Her first class was Other English and I showed her in a versatility set-up. She and her new tack (and new doll and my Elecktra doll) did quite well. 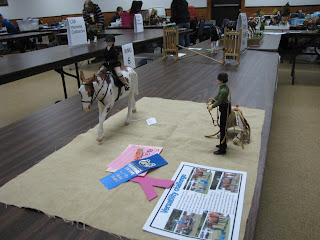 Here is a photo of her with just tack in case anyone wants to see. 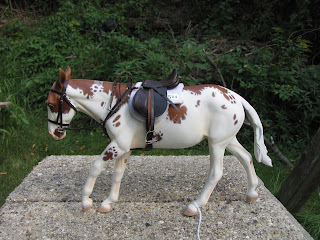 I also decided to show Mocha Latte in English. I was going to show my pony Halestorm but then while tacking up I discovered I accidentally sent her girth out with some tack I sold (oops). I did get that situation worked out but I have no other pony-sized girth so I showed Mocha. She is also wearing Braymere tack. Her first class of the day was English games. I think this may have been the first time I ever showed her in English. Anyway, just 7th place but there was a lot of show left. 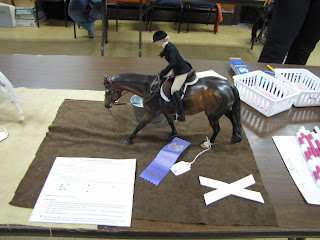 A Little Mayhem also showed in English games and she managed 4th against the tough competition. Looks like this team is going to do OK. 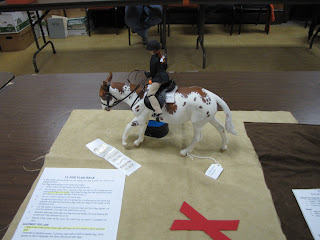 Next was Arena trail and I had completely forgotten to look through my documentation ahead of time to see if I had an appropriate trail pattern. I was very pleased with second place. I did notice when uploading photos that my long poles are two different colors. I was in a bit of a hurry. 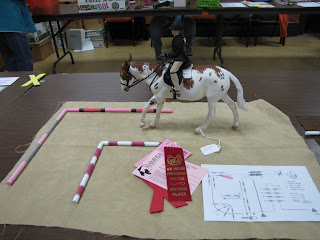 Mocha Latte also did Arena trail but she only got 8th place. The judge said she would have liked to see her a bit further up in the obstacle because her head is turned a bit. I agree with that assessment. I do like this obstacle though so I will likely use it again sometime. 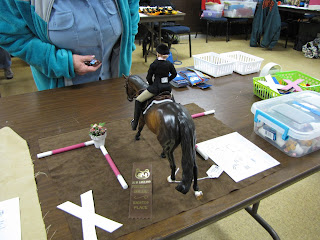 One of my show goals for the day was to get Caramel Latte a NAN card in Other Performance (anything) so she would qualify for a NAMHSA Performance Versatility award. She got it with her pink panther costume but now that I have looked around the Merit awards page I might try for a Performance Legacy award with her (I think that's the one). I need some more cards for that but not really that many. 9 or 10 I think. So maybe that will be the new goal for her. 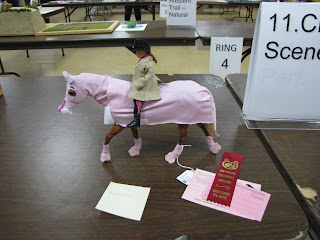 I only own one set of dressage fence pieces so I decided Mocha Latte was better suited for dressage than A Little Mayhem (though mules can totally do dressage). So I found a pattern that worked for her, set it all up and it was worth it! Mocha finally gets a nice placing. 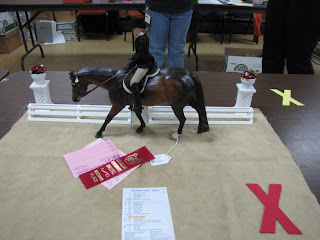 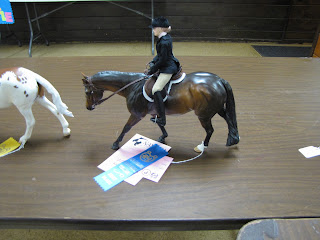 and A Little Mayhem got 3rd. Both of them went to callbacks but I has skipped so many classes in the division they didn't have a chance at any champs. I wasn't looking to get them so it all worked out. 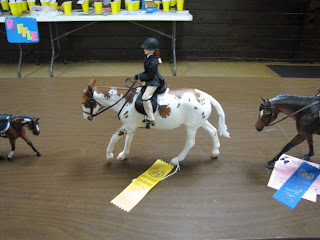 Next was the western division and Flash in the Sky started off in roping with tack by an unknown maker. I think the bridle was made by Pam Perkins. 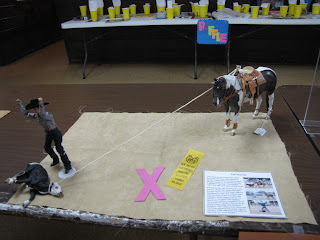 And then Bootlegger did Other Stock work with this team penning entry. I was very pleased with his second place. 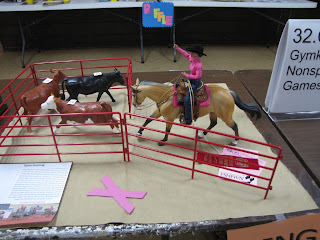 Bootlegger also did the Housewife Scurry but he only managed third because I forgot (and the judge noticed) that the other vegetables that should have been in the bucket were not in it! Oops. Sometimes in a tough class it's the little details that make the biggest difference. Oh, this was speed games. His tack was made by Pam Perkins. 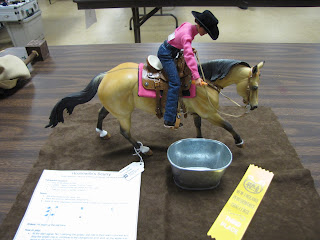 Flash in the Sky did non-speed games with this two barrels and a pole game. Reference is from Jennifer Buxton's website. I think this would have done better if Flash was actually paying attention. 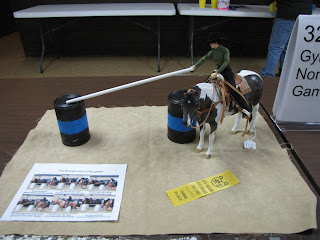 Flash in the Sky Redeemed herself in Other Western with her Extreme cowboy challenge entry. The bendy doll probably helped. 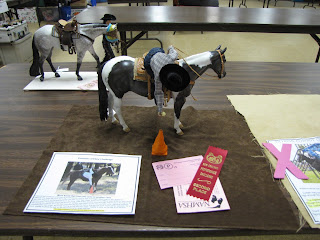 Bootlegger also did an Extreme Cowboy Challenge entry in Other Western but the doll was just sort of sitting there (I was running to judge and not paying attention) so it didn't look too convincing. 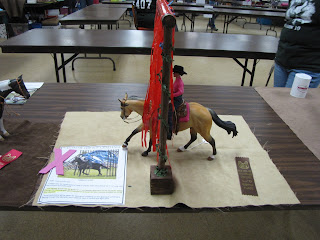 My real focus of the day was OF Showmanship. Lady Liberty has been working on a NAMHSA Superior Event Horse award for a long time. Showmanship can be a tough one to get because it sometimes gets lumped in with Other Western. Lady got her Register of Merit in 2012 and we have been working on the rest of her qualifications since. She has just missed a NAN card a few times (third place is very sad when you are working towards a big award). It was great to get a first in this event. I completely stopped showing after this class (I skipped CM western trail and CM western pleasure with both of my western horses) and I just concentrated on finishing the judging. 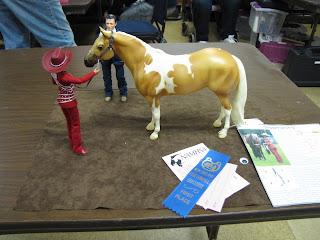 The few near-misses on this last card inspired me to revamp nearly everything in this entry. There's not a lot that goes into showmanship but I made her a new doll, a new fancy show halter and new, very details documentation. When I set up the entry I paid careful attention to everything I know about showmanship. I didn't want it to be one of those days when I spaced and put the doll in the wrong quarter or something. That would suck.
So tomorrow I will send in my cards and application for Lady Liberty's Superior Event horse award. I may bring her to TRXC in 3 weeks and show her one last time in showmanship but I think now she will get to retire. She's earned it.
Posted by Field of Dolls Studio at 4:07 PM No comments: