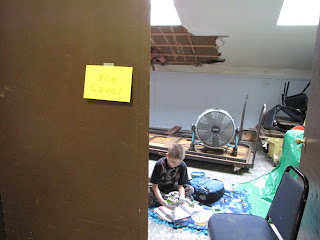 This could be a post weekend show report, but it's not. On Saturday I went to Factory Ponies Live held in Spencer, MA and on Sunday I went to NEMHC also held at the same hall in Spencer, MA. While I did actually show on both days I was more concerned with my son Travis. He came to the shows with me for the first time ever.
Bringing my son to a show might seem like no big deal but Travis still has limited communication, can get very silly and hyper and loves to run. Lucky for me there is also a very large chair closet that he was allowed to hang out in. Not only did we nickname it "The Cave" but there were stacks of chairs Travis could climb when Mom wasn't looking. 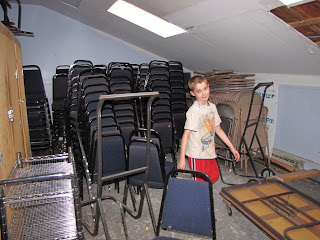 On Saturday we did take several breaks to go outside and run around. Travis has learned at school to stay within a defined boundary while running off steam so I told him to stay on the carpet of the covered porch and as long as I reminded him every now and then he listened and got to run and run. My daughter, Elecktra, also came to the shows with us and helped me keep an eye on Travis and they went out for running breaks together once I had defined the boundary. Travis looks like he's having a good time. 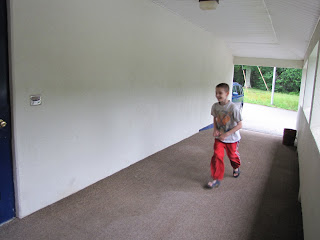 I thought that the second show day would be even harder for him but as soon as we came into the hall he went right into "The Cave" and asked for his blanket so he could hang out on the floor. Elecktra set up his chair couch (3 chairs next to each other that he liked to lounge on) and he was super calm all day and only wanted to take one running break. A good weekend all around. 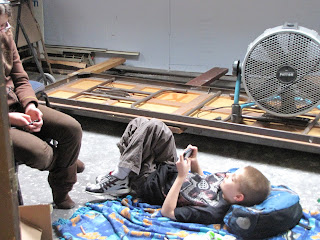 Surprisingly even though I didn't pay as much attention to showing as I usually do and I got only OK placings in a lot of classes, I had enough points for Lady Liberty to earn Western Performance Champion and then Overall Performance Champion. So the weekend was great and I got some big rosettes. Good times. 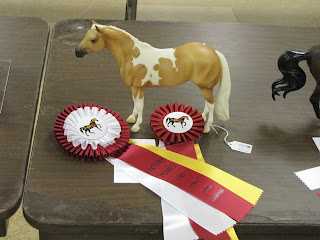 Posted by Field of Dolls Studio at 4:44 AM 3 comments: