It's all in the details

As I come to the end of the planning for my third year hosting Baystate Halter Live I realize now more than ever it really is tiny details that make any event great. Not only is my show only 3 weeks away but my wedding, after 10 years of us being together and more than a year of planning is a mere 10 weeks away. I realize now that hosting a show that would fall just 7 weeks before my wedding might have been lunacy. Well I've never said I wasn't crazy. I have also realized that I really love to plan events of all kinds. I might throw in a second show next year so I can host a performance show, or maybe I will make Baystate a weekend event. Maybe I will wait a couple of years to take on something of that size. Not that I am super good at waiting.
So these days I am all about details. And lists. I have several lists to keep me on track. Lists of addresses, lists of classes, lists of what still needs to be done for the wedding, what still needs to be paid for for the wedding and the show, lists of entrants and so many others. To me, having a list is a way of seeing what you have occomplished. When I finish something I cross it off the list. I have also rediscovered that doing anything well takes a large amount of time. But planning out details can sometimes make things easier or could end in disaster. I think some of the outcome depends on your attitude. If I expected my wedding to come off like a fairy tail I would almost certainly be disappointed. But I fully expect my son, Travis, to try to roll down the hill where the ceremony is to take place. He tries every time we go up there. Ethan says he is going to roll with him. I said they can have fun and I'll be the one not getting grass stains on my dress waiting at the top. If they really do it I might be surprised but I will probably laugh anyway.
I spent exactly 7 days, several hours a day designing, laying out, and conceptualizing my invitations. I roughly knew what I wanted them to look like but I am not a designer so I was not all that familiar with how to do what I wanted. But I have some really cool programs and I came up with something that I thought was really nice. Even my Dad likes it. 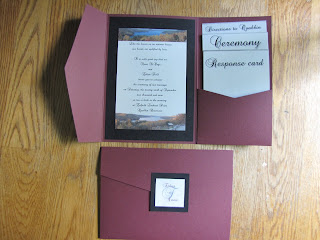 I also spent a good amount of time working on the booklet for the show. It didn't take me a week but it did take up a large portion of today. The top part of the picture is the cover. I had another, plainer cover designed originally but then I thought it would be more fun to make the fancy cover. It took barely any extra work. 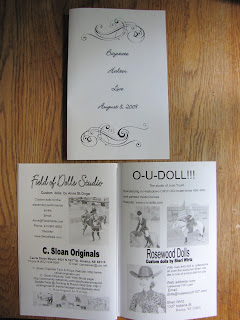 The second part of the picture is a couple of pages of ads in the back of the book. The whole thing is still in the rough draft phase but it is my first printed draft. I am going over it to make sure things line up properly, nothing gets cut off in printing and things just look good overall. The process is so much simpler for the booklet than it was for my invitations because for the booklet I am just printing on paper that will be folded in half. The invitation pieces had to line up a certain way for cutting. And some of the pieces were double sided. I think the result is worth the effort though.

For the show booklet having something that is nice and looks professionaly laid out just makes me happy. I also hope that it makes the show entrants happy and all the imformation they need is in one place. There are so many other details involved in wedding planning as well as show planning but I wanted to share a couple of printed things that will add a nice touch to each of the events. As it gets closer to the show and to the wedding I might decide to share more about details. Maybe I will post my How to host a live show document. It was written on the same guidline as a wedding planning book so it might be interesting.

Posted by Field of Dolls Studio at 3:43 PM No comments: