...to sculpt heads. Since I have never yet successfully sculpted a female head that actually looks female I decided to get some face molds. I should be able to handle altering them a little bit before baking so the faces are not all identical.

And yes it is confirmed, the new big headed dolls are in fact the new Breyer dolls. I called Breyer today and after convincing the customer service agent that the dolls were in fact Breyer dolls she went to ask someone. She wasn't able to tell me if all the dolls would have the new big heads or if a smaller head doll would be available...so really she wasn't really helpful at all. Someone higher up is supposed to call me as soon as they figure out who can best help me with my issue (that I put in writing and sent to them). Until then I will buy as many normal headed dolls as I can find and start practicing with the sculpted heads. Just as soon as my molds come in. Really, why can't Breyer make the dolls better instead of worse?
Posted by Field of Dolls Studio at 1:39 PM 3 comments:

The photo of course proves it to be true. Then I was crusing ebay today and saw this

If Breyer releases all of their dolls with these huge cartoony heads I may be in trouble :(

Posted by Field of Dolls Studio at 6:11 PM 9 comments:

With all the excitement about Jennifer's blog contest, doing posts about performance horses and working on dolls I seem to be missing out on something really important about my blog.
It's supposed to be about dolls.
I think I missed that memo. I realize I do sometimes write about dolls and I mention dolls (and tack makers and sculptors and painters) in posts. I promise, there will be more doll posts soon. I was actually thinking of doing some about using dolls. Crazy right? Some people are scared of dolls (and not because some dolls are super creepy) and I want to share some visual tips for using dolls and using them well. I have the photos somewhere as I think I have written about this for something in the past...those posts will be coming soon.
But since I have actually been working on getting dolls finished lately I don't have time to search out pics just yet. So I will share some new horses!
This little sweet mare was something I picked up as a raw casting a LONG time ago. I don't know who she is or who sculpted her. I do know that she was a nasty mess when I got her and she took a lot of prepping. I can prep very well but I am really burnt out on it so she got worked on and put away. And then worked on and then put away. Over and over for awhile. I started painting her and then decided to strip her. But awhile back I worked out a trade with Alicia Miller. Part of the trade was for Alicia to paint this little mare for me. I said she could paint her any color she wanted except for rabicano because I hate that color. And this is what I got :)
So this is Sweety Pie (which I find funny because she looks so cranky!) She will be shown as a Pottok horse. I didn't come up with the breed, I am not good at that.

The other part of the trade with Alica was this Rose Reiner. Alicia had taken him off his base (and did an awesome job!) done a bit of work on his mane and most of the prepping. And then as happens to a lot of us she lost interest, I had something she wanted and I got him. I sent him off to Meghann (Hoscheid) Lorei for painting. Meghann really brought him to life and I am thrilled with him as well. And I realize yet again that painting is not one of my talents. Perhaps if I had time to practice day and night for many years I could reach the level of these two talented artists. Or maybe not.
This is Bootlegger and he will be shown as a Quarter Horse. And shown HEAVILY in performance just as soon as there is a show :) 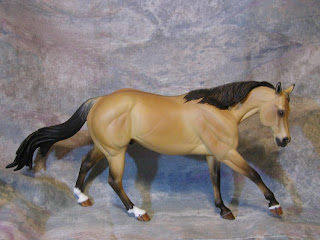 Posted by Field of Dolls Studio at 3:05 PM No comments: