Last weekend I attended the Albany Area Regional Performance (yes, the show is really AARP) in East Greenbush, NY. It was so much fun! There were not  tons of entrants but the competition was fierce as with most shows in Region X. My goal was to not forget little details that I should know by now and I think I pretty much got that down. Part of the reason could have been the show was a bit more laid-back than some.
I had thought about doing a blog post on my show placings but Jennifer Buxton beat me to the punch with her post. I can't compete with her writing so I thought of another post I can do. Don't get me wrong, Jennifer took nothing away from me, I may never have gotten around to doing the post and it might have been thoroughly boring. But my blog is sad and quiet so I thought of something to talk about.
My custom Stone Pony. 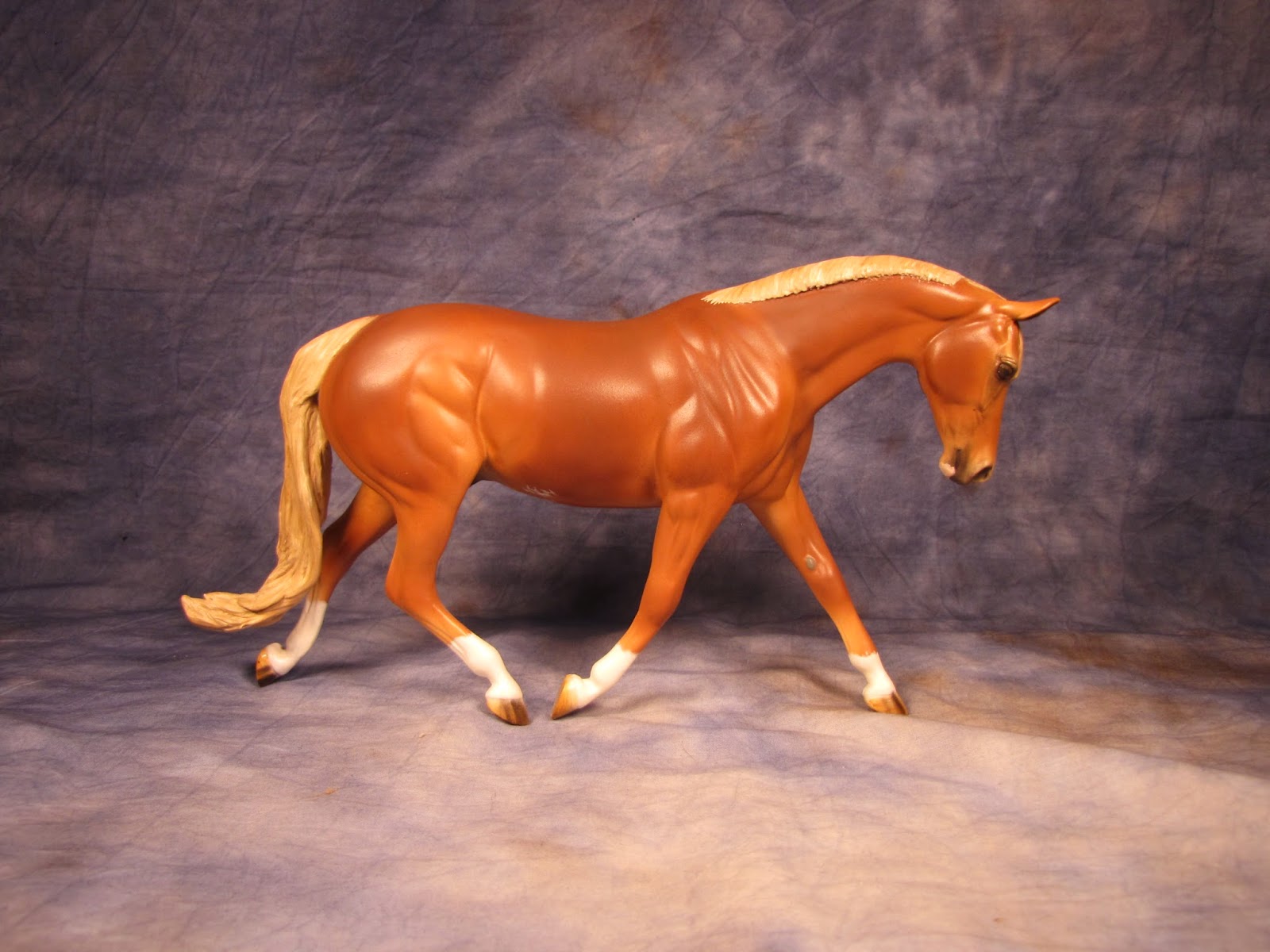 This is Halestorm. I believe she was customized and painted by Julie Brooks but I am not 100% sure on that. I bought her from Joan Yount. Part of the idea of buying her was to compete head-to-head with my friend Marisa and her custom Stone pony Electric Mayhem. 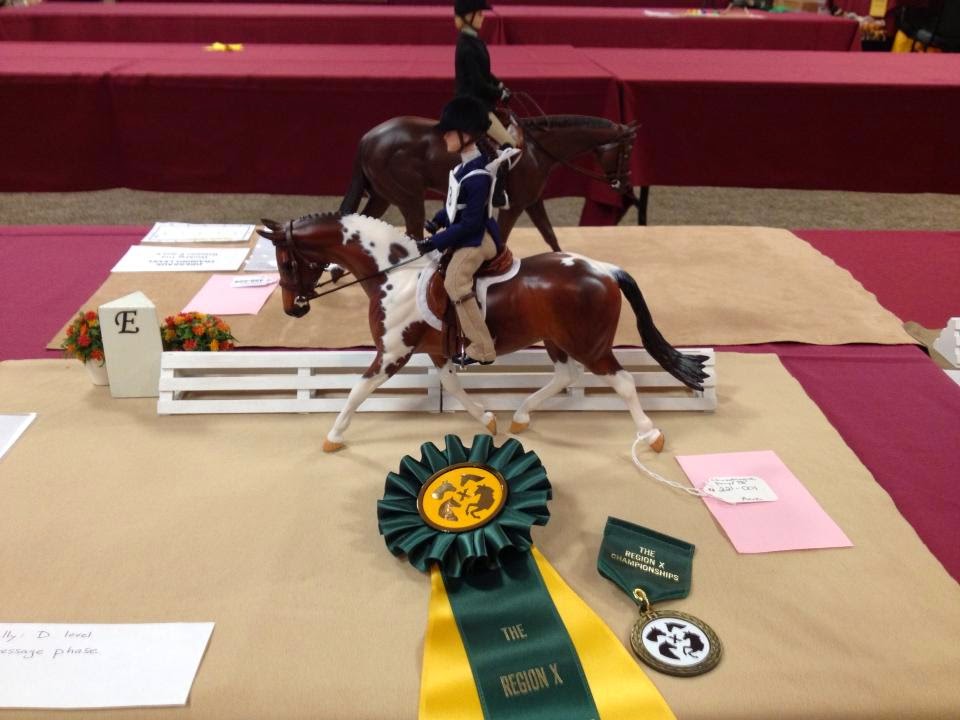 Electric Mayhem is a Stone pony customized and painted by Liesl Dalpe. That one I am sure of because I am pretty sure I watched at least part of the process.
So I got Halestorm and I put some tack on her and showed her at Baystate Models Live last summer. I think I missed some of her photos but here is the photo evidence of her appearance at the show: 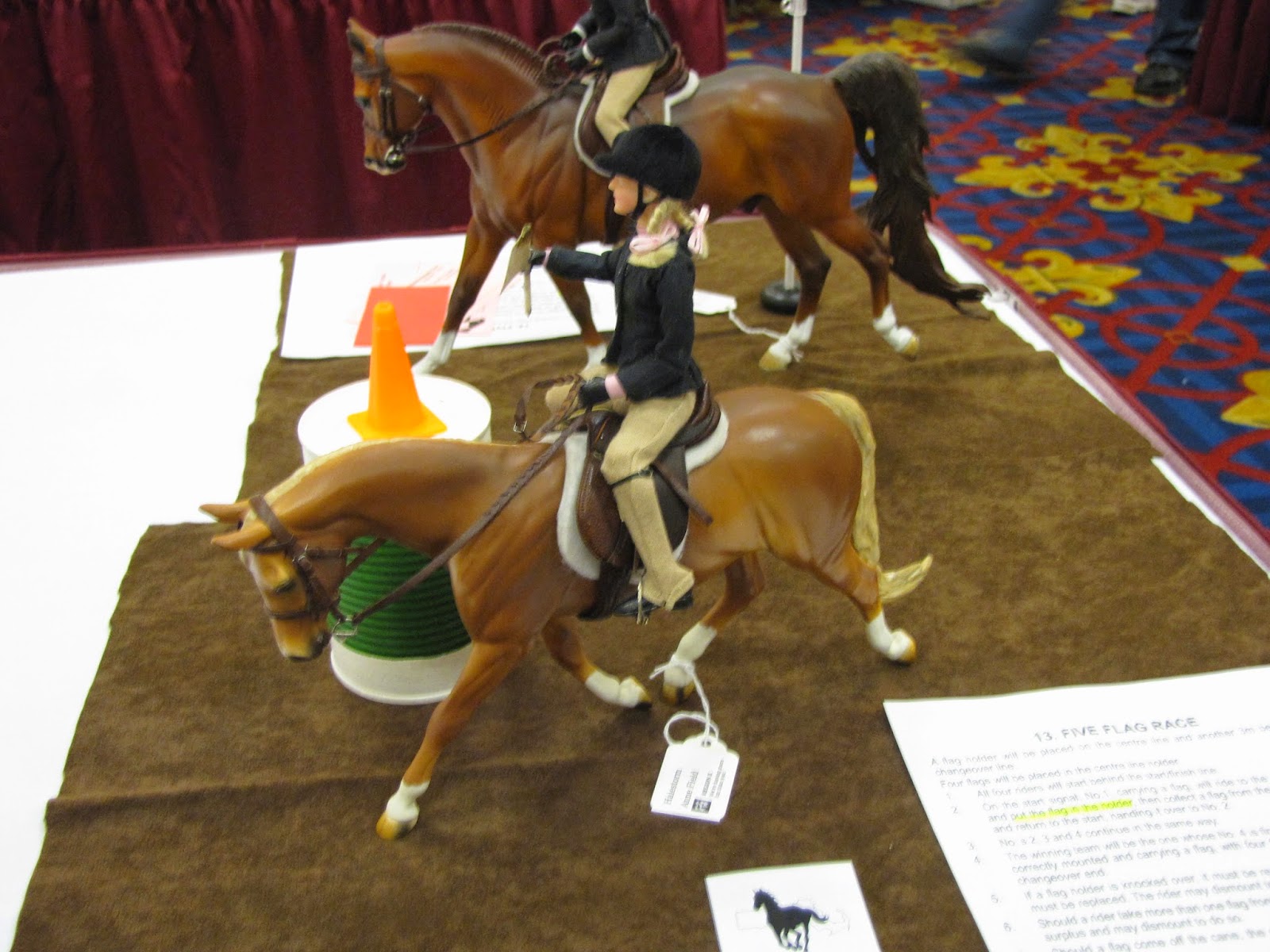 Fourth (and last) in games. 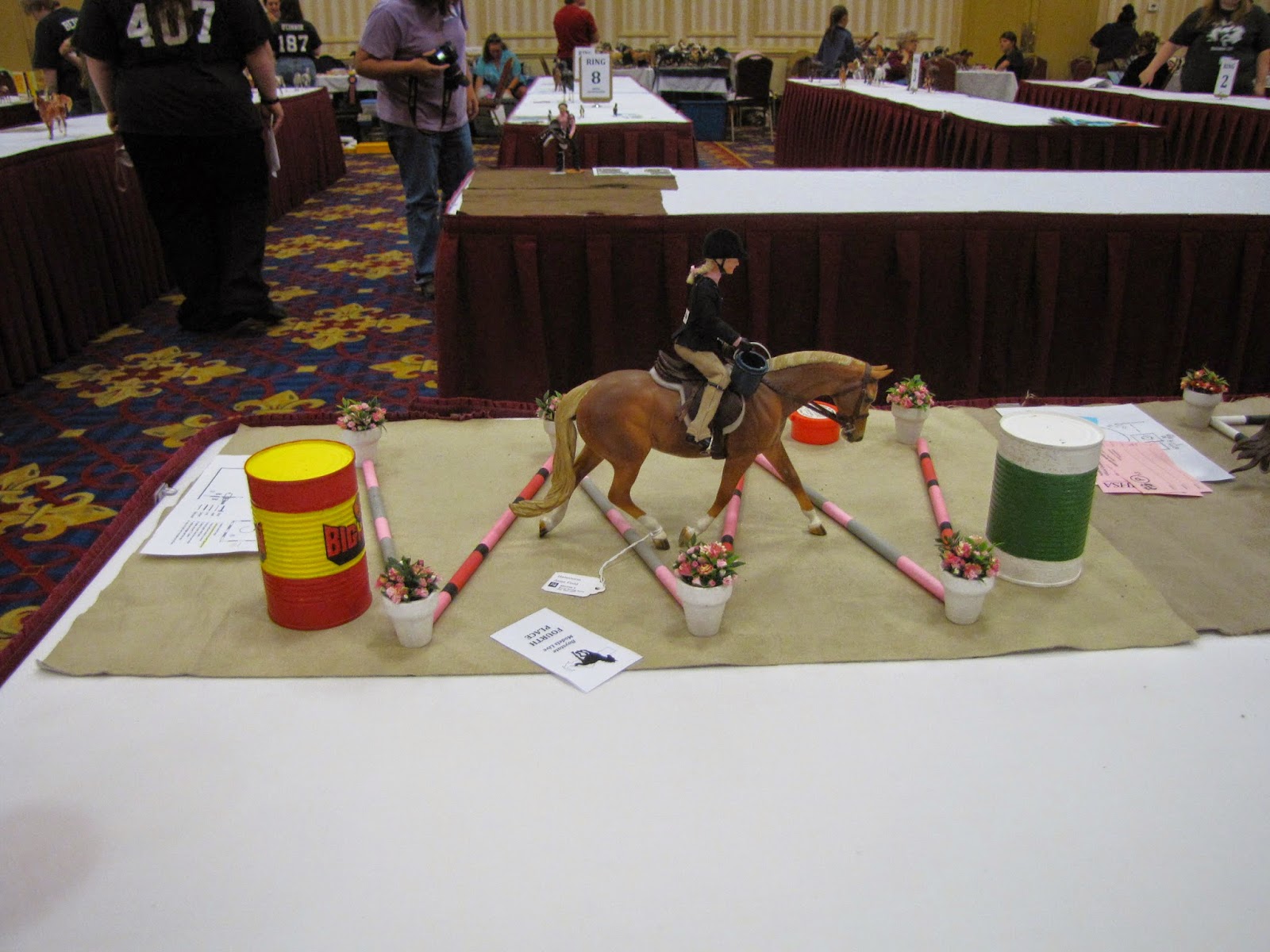 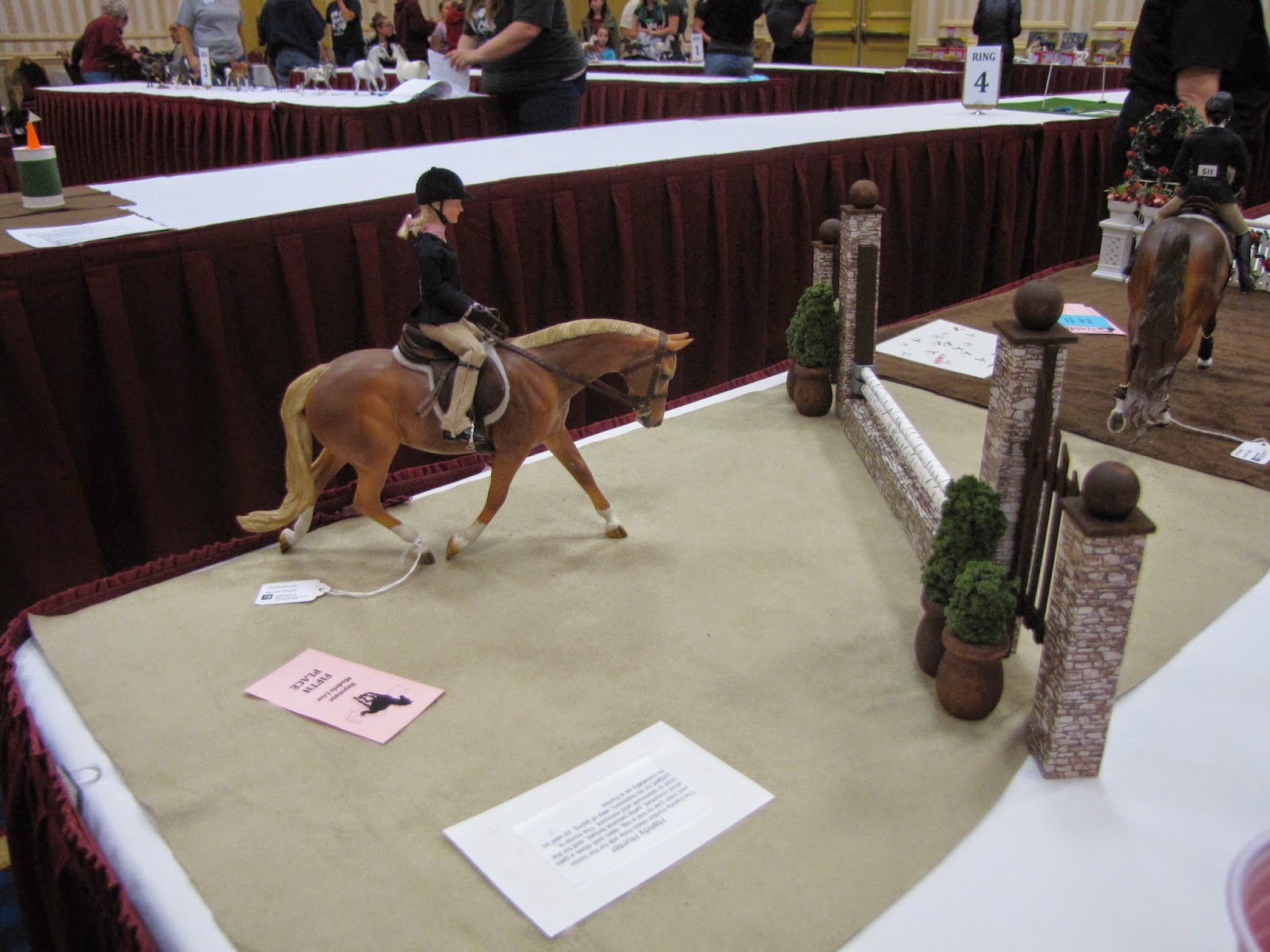 Fifth (and last) in hunter over fences.

I think after that I chose to keep her out of pleasure but I checked the show results and this is all she shows in.  I will note several problems with the entry and put them forward as reasons Halestorm did not do very well. One: while she is wearing AWESOME tack (it's a BCS set made by Jennifer Buxton) it is a bit big for her and the stirrup leathers were meant for an adult so they are too long. The doll also is not a good fit for the saddle. The end result is an entry that looks less than awesome.
Halestorm also showed in the open classes at The Region X Regionals (TRXC) last year. I don't seem to have any photos but here is what I found in the results:
Fifth (and last) in hunter over fences. I think that is everything show showed in.
I believe she was wearing some tack I made and had an adjusted (partly remade) doll that still did not fit the saddle very well.
So the end result of the start of Halestorm's showing career was a show pony that was not good at performance. But everything is fixable so I fixed it.
I did a trade with Pat Coulter for this super AWESOME pony tack. I have tried a lot of English tack makers over the years and so far I am very fond of Jennifer's tack and now Pat's. That's it. So Halestorm got a new tack set from Pat which is a great fit for her size and I made her a new doll which also fits properly in the saddle. The started the day with hunter over fences 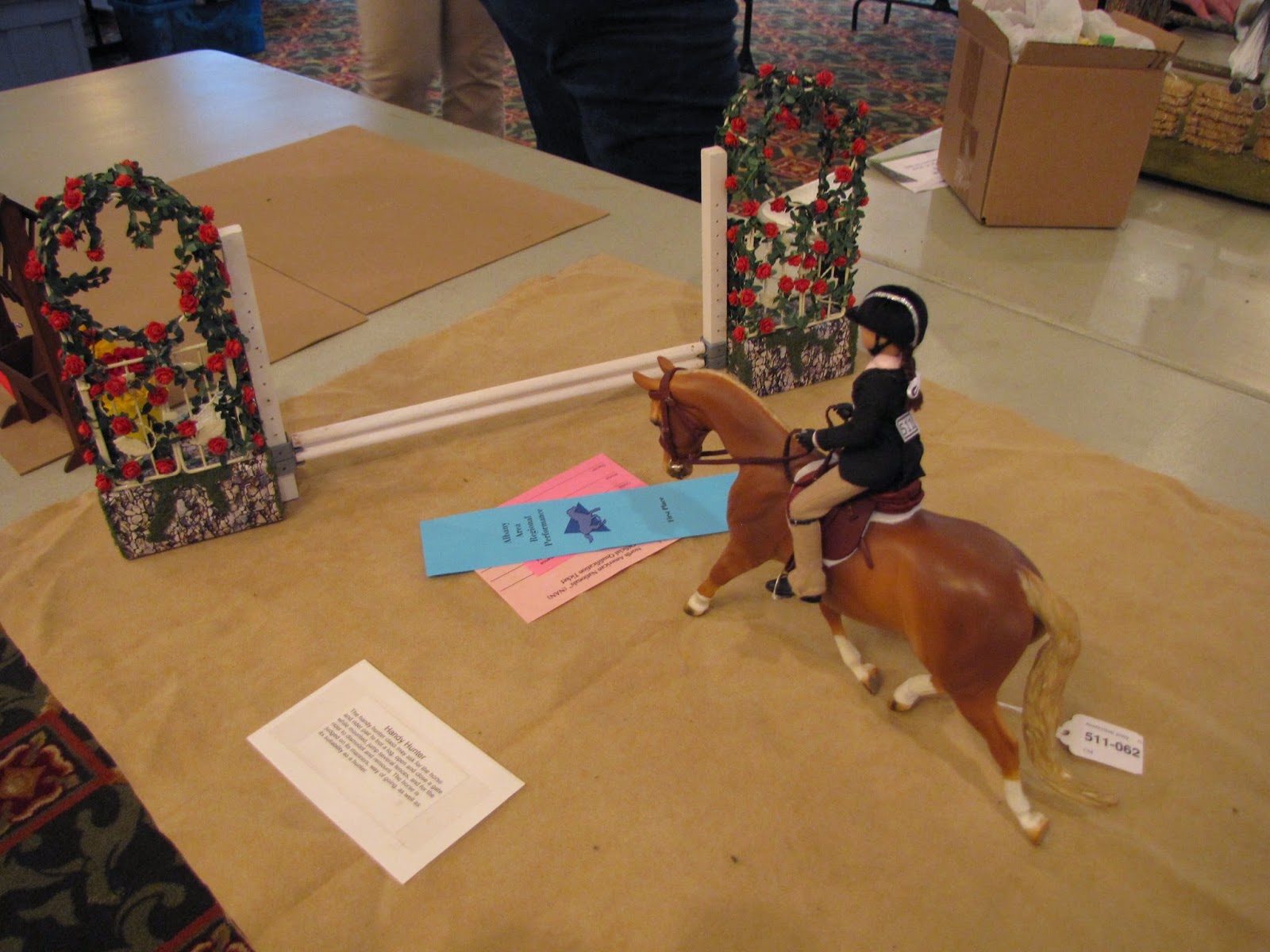 Then moved on to English games. I want to make a note that the photos in the Candy Race documentation were taken by me at the show at the Blandford Fair (Blandford, MA) in August of this year. When I saw the game I took a ton of photos to use with my pony. And then I made a whole bunch of tiny candy! 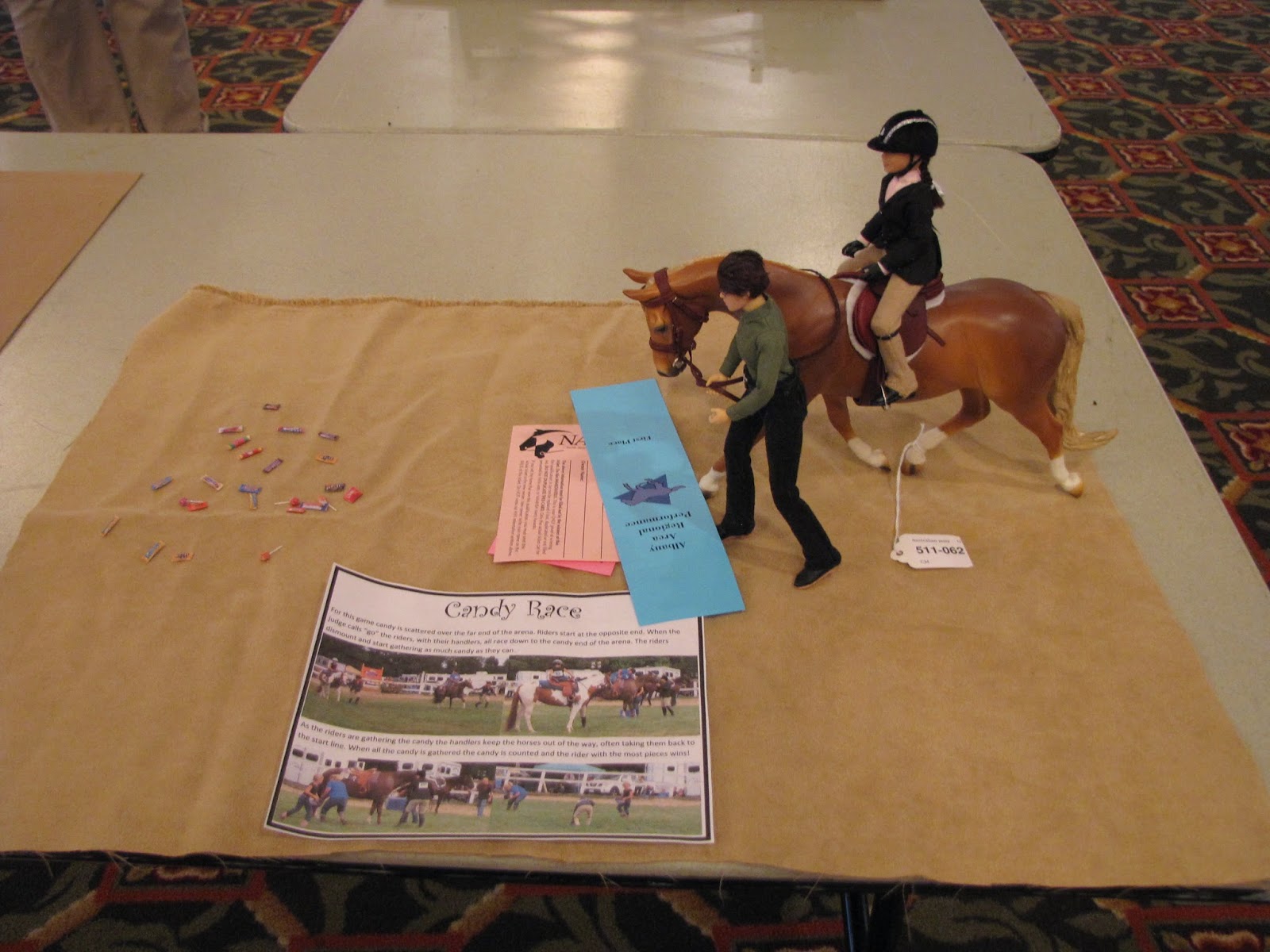 After that was Other English and I decided to try a therapeutic riding entry. The photos in the documentation are all also taken by me and are of my son in classes or shows. The doll on the horse is my "Travis" doll and the leader doll is my "Elecktra" doll. It's fun to have both my kids in one entry. 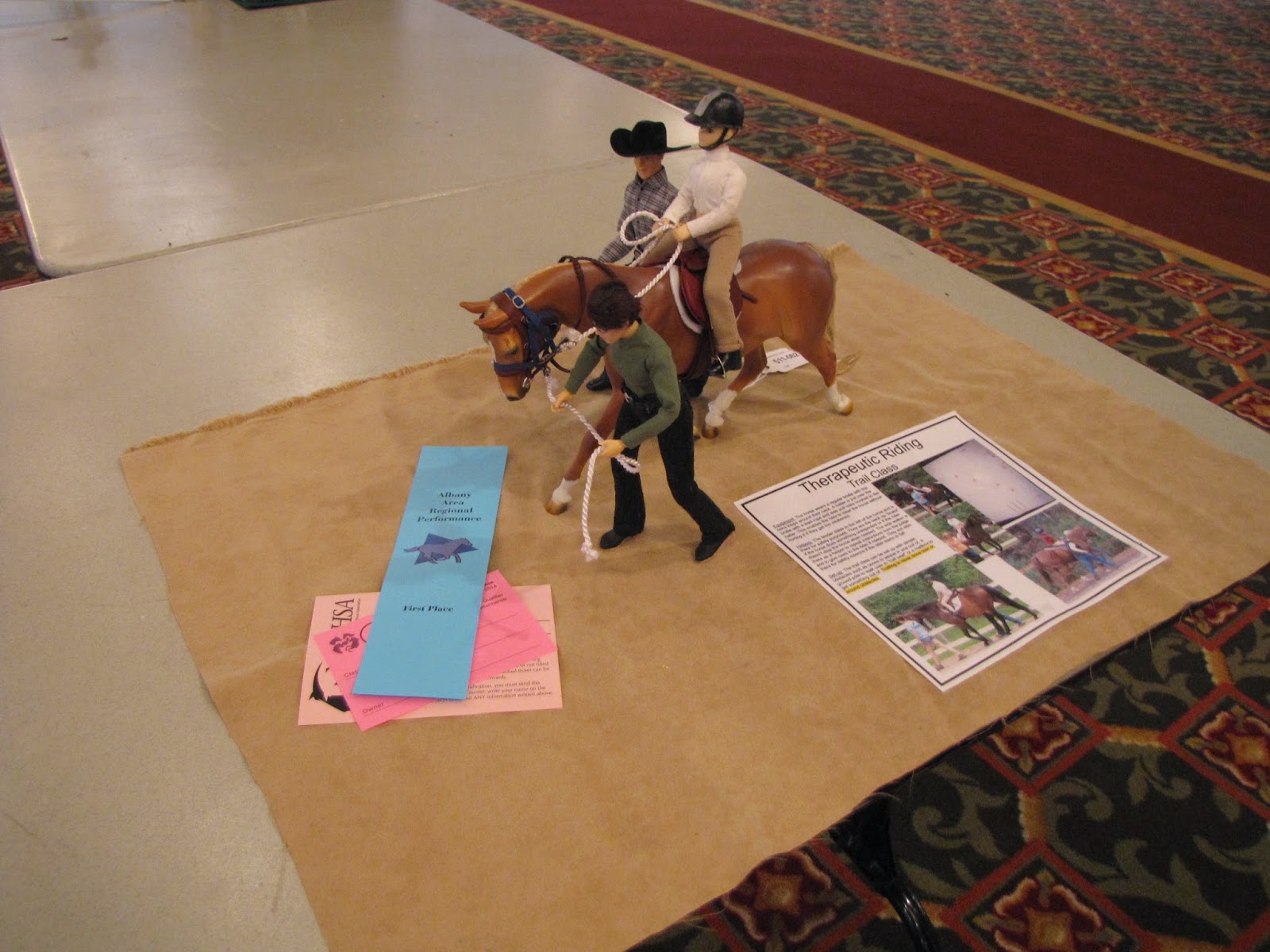 Those were the classes she entered in the English High Action division. Halestorm ended up with Reserve Champion! 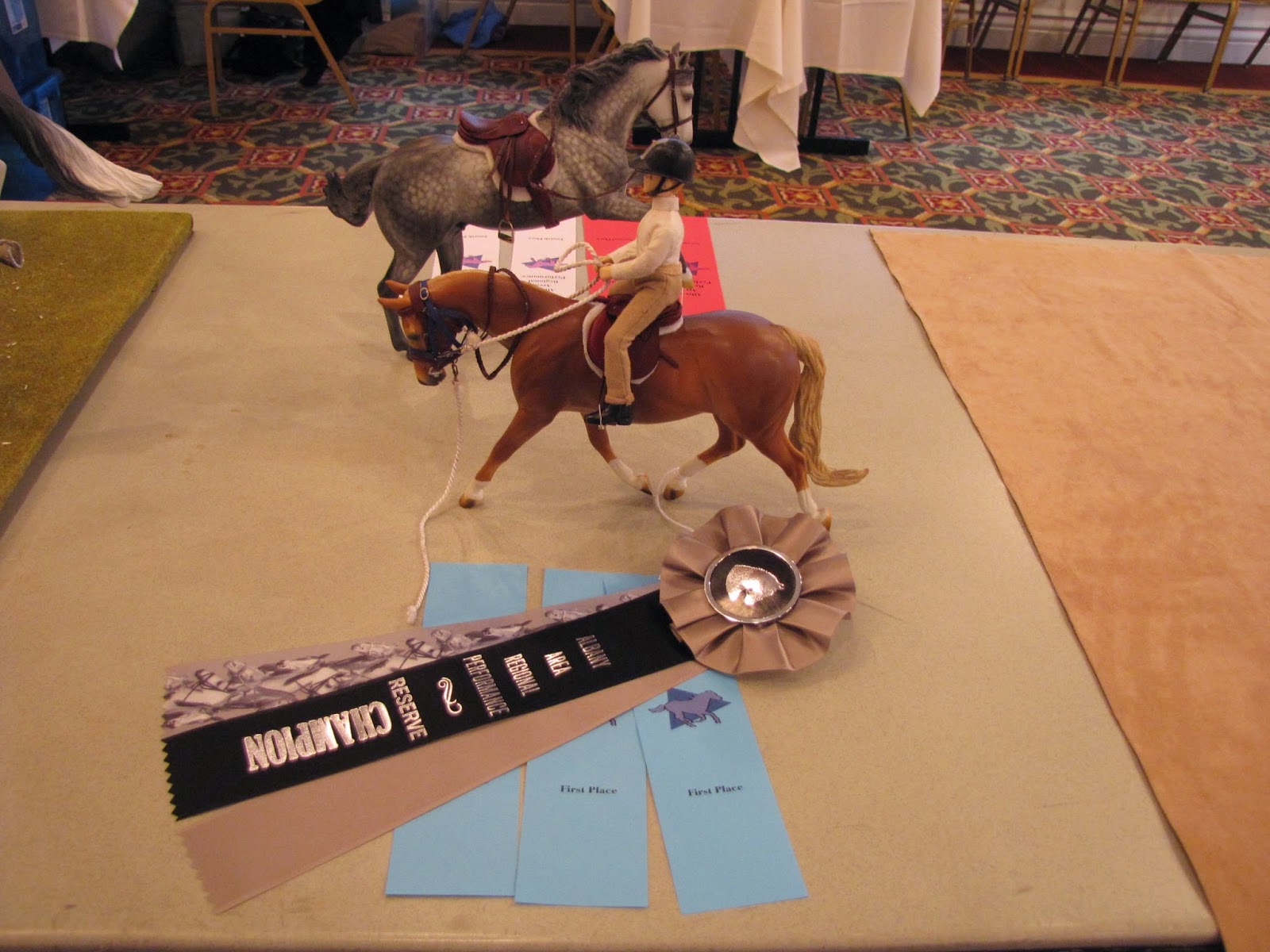 Next was dressage. I believe this was Halestorm's first time in dressage. But I thought it out carefully, check my details and it worked out really well. 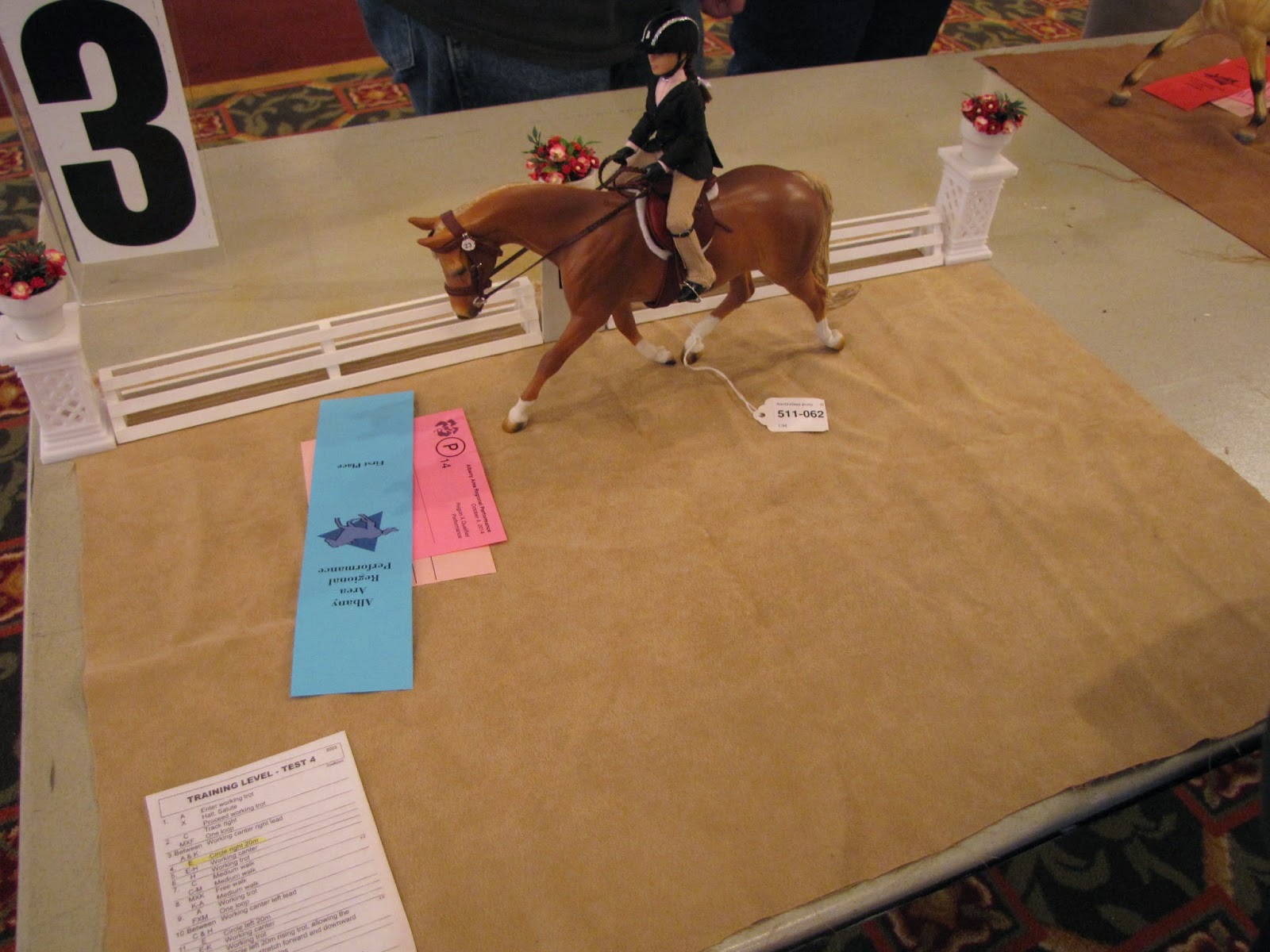 Next for us was Arena Trail. I found a semi-interesting poles set-up and it paid off as well. 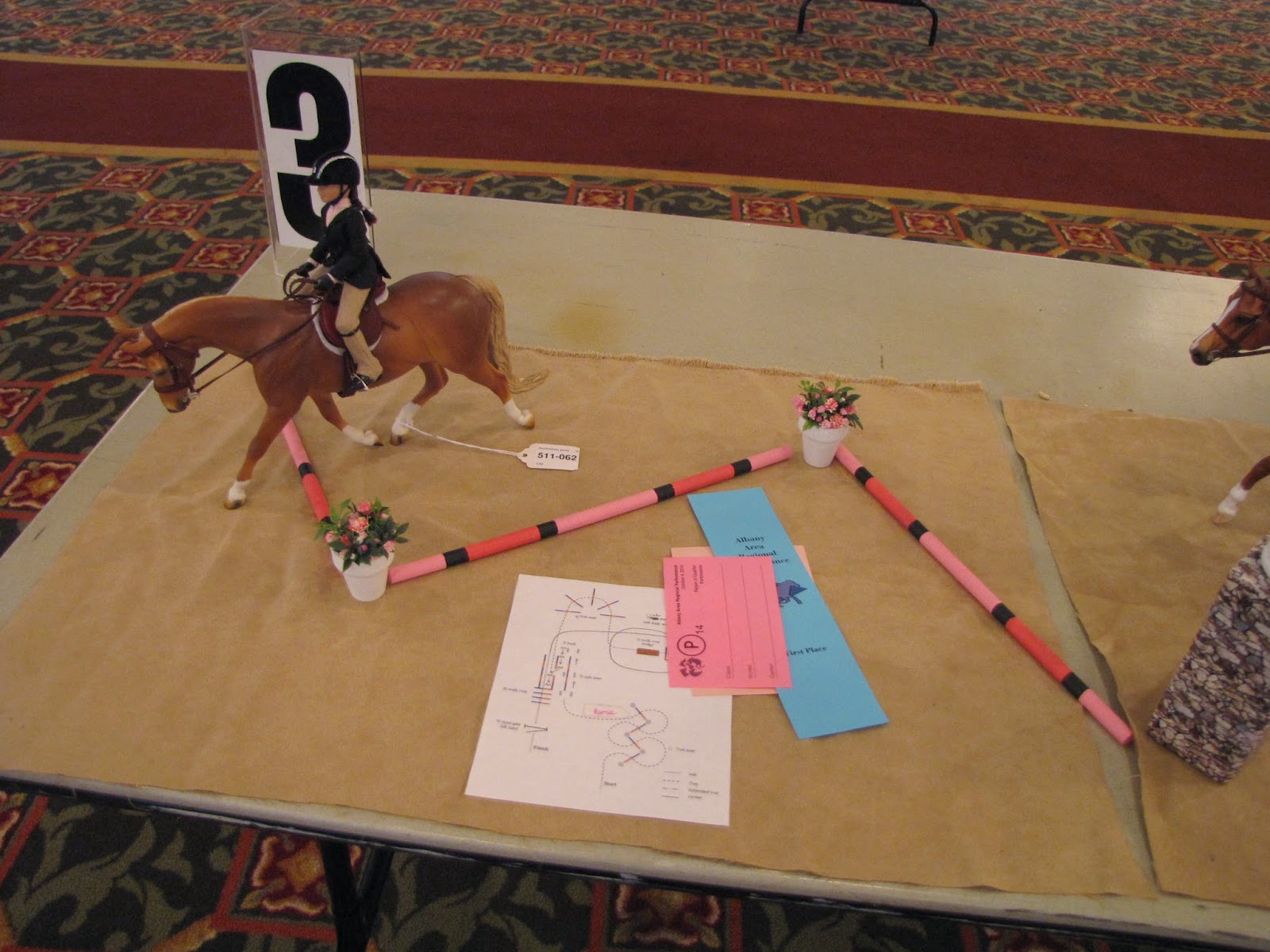 Last was English Pleasure Other Type. Halestorm got first while my other entry, Caramel Latte got second. 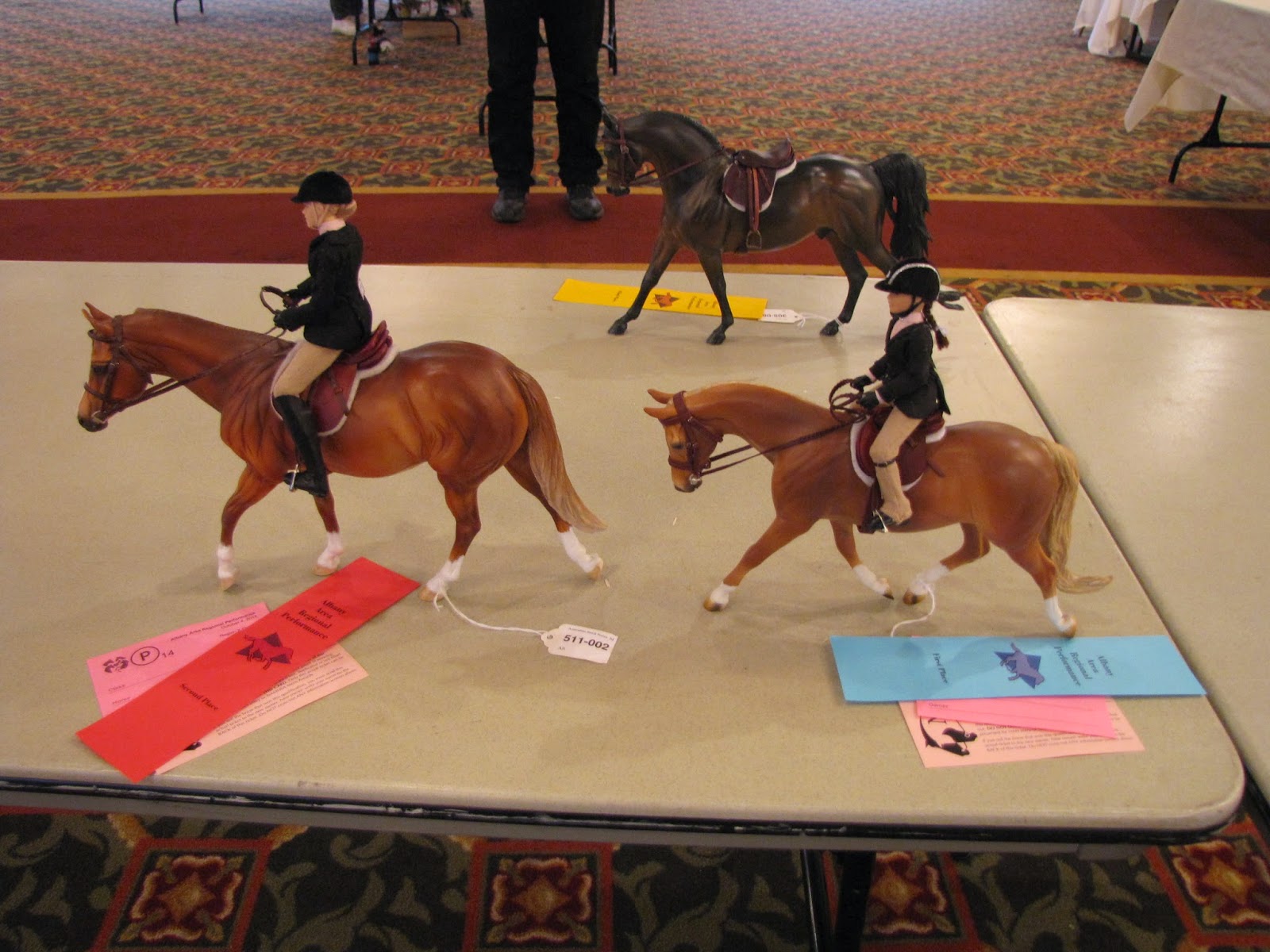 The result of the Low Action English division was the Championship rosette for Halestorm! 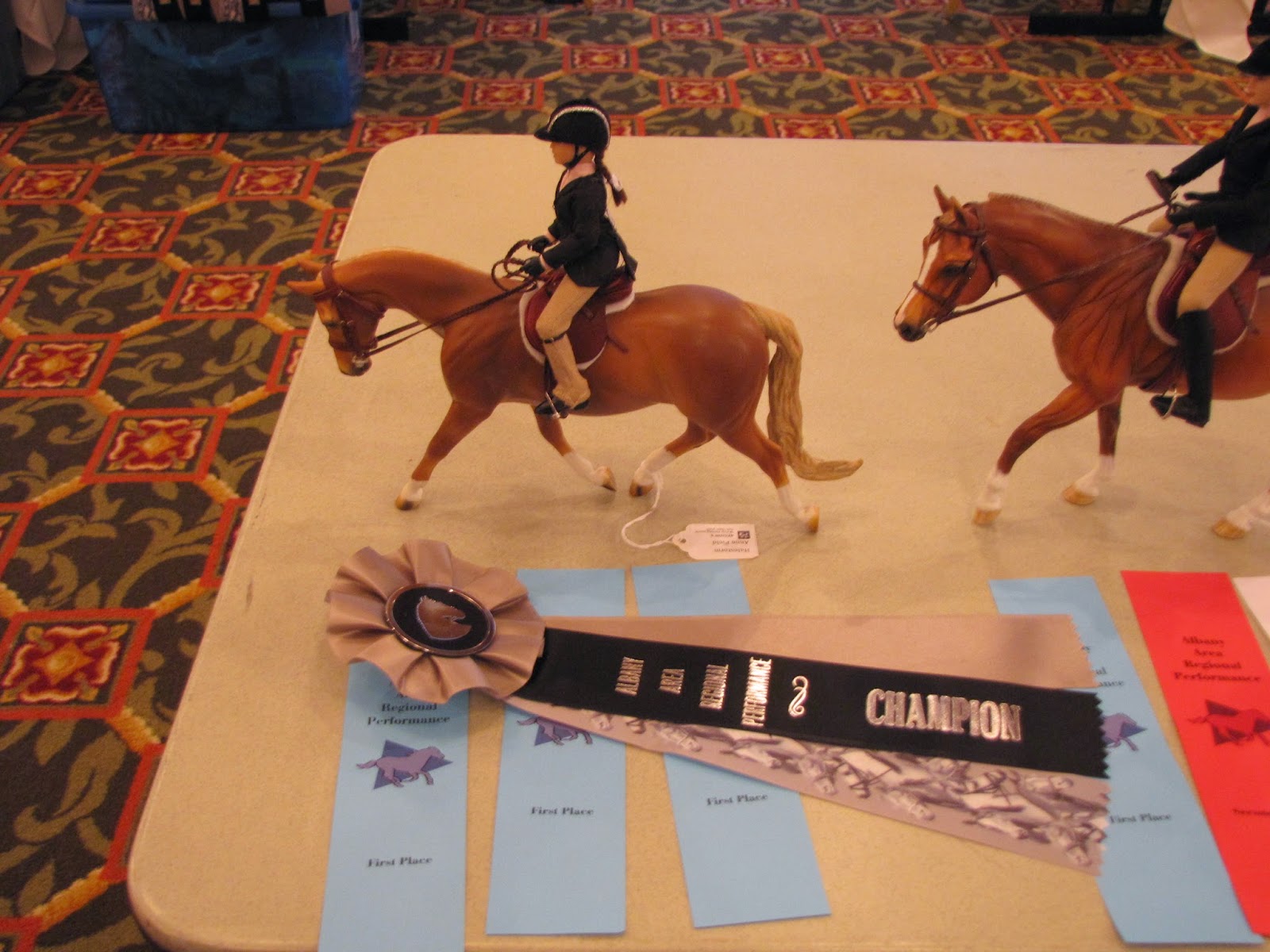 It's completely possible that on a different day with a different judge Halestorm might not do as well as she did at the AARP show. But she was shown a few times before with poor results and some careful tweaking improved her showing in a big way. I guess my advice for anyone that is looking to learn anything from my blog (if there is anyone out there like that) is make sure your tack fits the horse it is on. And not just fits but fits well which extends as far as not having extra long straps on anything. If you use a doll, make sure it fits on the horse and on the tack. And documentation is not an option but a must. The easier your documentation is to read the more the judges are likely to actually read it. I have never met a judge that wants to read a novel while judging.
In closing, I am glad I didn't give up on Halestorm's showing career. I want to, again, thank Pat Coulter for a great trade and making me a really fantastic tack set. Now I think I am ready to have that head-to-head competition with Marisa and Electric Mayhem.