Back to Real Life

This past Saturday I got married. Ethan and I have been together for a bit over 10 years so we have a somewhat different relationship than a lot of newlyweds. It was a small wedding and I can't say that everything went smoothly because it didn't. But overall the day itself was wonderful, great weather a beautiful spot for the ceremony and close family and friends. Both sets of parents have been very supportive and since we have all known each other for years there was none of the awkward meeting of the parents. I'm thinking of writing a book with advice for brides-to-be. 10:00 in the morning is probably too early for a wedding unless you enjoy stress and rushing. Have someone the day-of that knows the plans for the ceremony/reception so you can enjoy for of the day. And there are lots of other little things I picked up as well.
You also find out who your real friends are. We lost a couple of friends for something so tiny we think they were looking for a way out. It's sad but good that it happened weeks ago and not the day of the wedding. But we also found out the friends we do have are very generous. My good friend, Liesl Dalpe, took all of the official wedding photos. A lot of the pictures in this post came from her, she sent a handful so I had something to look at while she put the other (several hundred) photos on CD for us. Another large group of photos was taken my my friend Crystal's boyfriend, Peter. He is not the easiest person to warm up to as he seems to be a very shy reserved person. But when you do get to know him you will find a very friendly and caring person. And also someone that loves to tease. He showed me a horrible photo that he got of me at the wedding (no, I am not posting it, lol) and said it was the only one he got all day.
On to pictures! We all know that we look at blogs for photos so I have several to share. This first one is of our 2 kids, Elecktra and Travis, starting down the isle. Travis looks very cute in his little tux and Elecktra is looking almost grown up at this point. 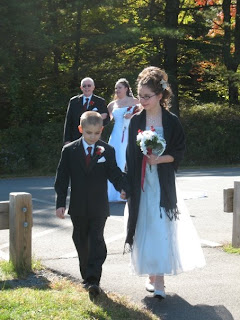 This next one is of Ethan and his brother Adam. Ethan loves it because from the neck up the look the way they might look on any Saturday morning. I just think it's a great photo. We are not entirely sure when it was taken but probably before the ceremony. I think this photo might end up on the wall as soon as I find some wall to put pictures on. 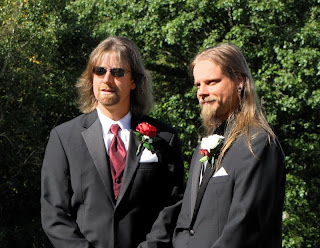 The next photo is also a picture of the extreme generosity of the people we know. Ethan's Dad borrowed this car from his friend, George. I have only met George and his wife once or twice but they were both very friendly. It was funny when John, Ethan's Dad, called me to ask if he should call George and see if he could borrow the Rolls I said, "what am I going to say? No?" When someone offers to loan you a vintage, superbly maintained Rolls Royce for your wedding you don't say no. Blog photos are just not as nice as the originals :( 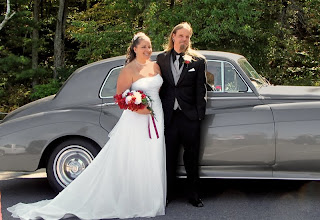 This next one is Elecktra and I after the wedding. She is almost as tall as I am! She was very emotional during parts of the ceremony and may still have been at this point. We included the kids (though Travis didn't come up with us during the words) in part of the actual ceremony and then in the unity sand ceremony. I don't have any of those pictures yet but when I get some I might share some more. 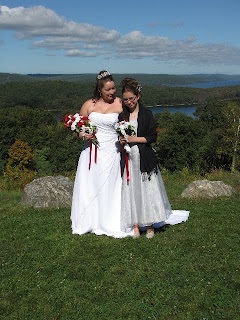 Before the wedding I made lots of jokes that I fully expected Travis to try to roll down the big hill at Enfield Lookout Point. I mentioned that again to a couple of people at the reception and they told me he DID go down the hill! I didn't see it but I still laughed about it. In this picture he looks like he is getting ready to go down the hill. But he likes to be a little mountain goat on the boulders so he may just have been playing. 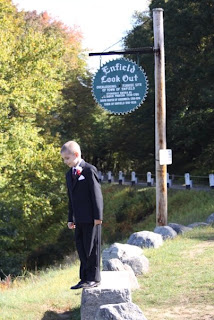 This is Cathy and Crystal and I. Cathy is my real sister. She's the one in the black dress. Crystal is one of my best friends and I consider her one of my sisters. I really like the original of this photo but wanted to share it. We all look pretty good I think. 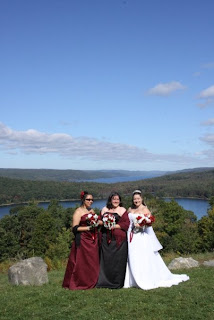 Ethan and I were planning on going on a honeymoon next year. That way we could save up for something really nice and not have to worry too much. But Ethan's brother Adam and his wife Shannon, sent us on a trip. We went to Newport, R.I. for the weekend and it was amazing. Not only is Newport a wonderful community that is heavily art influenced, the people there are very nice, the Inn we stayed at was great and Ethan and I have never, not even once in our 10+ years together, been anywhere alone. That was a huge treat in itself. We spent lots of time just walking around the town, did souvenir shopping, we saw a movie in an old converted opera house, ate at 3 different sushi restaurants (and there are still more for us to try, lol) and had a great time. Sunday morning we were out walking before anything was open and passed an art gallery (one of many). There was a gorgeous painting of the sea at night under a full moon. It appealed to both of us (not something that happens all the time) so we decided we had to come back as soon as they opened and buy it so we wouldn't lose it. They held the painting at the gallery for us so we didn't have to leave it in the hotel room and we talked about it for the rest of the trip. I think that was our favorite purchase of the trip. This picture was taken on the steps of the Jail House Inn where we stayed. It's a really interesting place. 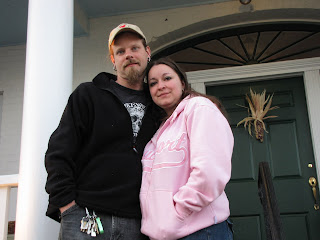 Also included in our honeymoon trip was a sailboat tour of the harbor. That was very cool. Neither of us had ever been on a sailboat though boats of any kind are fun. We sat next to a really nice couple, Carl and Laurie, from Pennsylvania and chatted with them most of the trip. They got pictures of us, we got pictures of them, etc. If we hadn't been leaving right after the boat trip we probably would have gone to dinner with them. We talked with them about tattoos and art (they were going to go check out the gallery where we got our painting) and neither Ethan or I had any business cards on us so Carl and Laurie were trying to memorize the name of Ethan's tattoo shop. Hopefully they remembered and they look it up, it would be nice to see them again or at least share some photos from the trip. 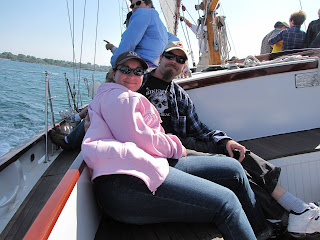 All in all we had a great wedding and a great honeymoon. There are still so many things in Newport we haven't done we are thinking of going back next year for our anniversary. I hope we can, it was a great place to visit. I didn't want to come home.

So here is the part where we have to get back to real life. Ethan went back to work and I am working on getting the house to look like a house again. Soon I will have to get back into my doll making as well. I have so much less stress now that the wedding is past that I probably will be able to sit down and work. Just as soon as my house is neater. And now my studio name makes sense.

Posted by Field of Dolls Studio at 6:24 AM 2 comments: