Here we are at the end of 2018. I am still bad at blogging. I think this is only the 4th post of the year, the last was in July. I could say my New Year's resolution is to update the blog more often but I would like to be realistic. Anyway, it's now time for the doll year in review. With some other stuff thrown in because why not.
The first doll of 2019 was this conquistador. He was an interesting challenge and was also the reason I learned how to make doll armor! So now I can make pretty much any type of doll. Some just take a bit more thinking about. 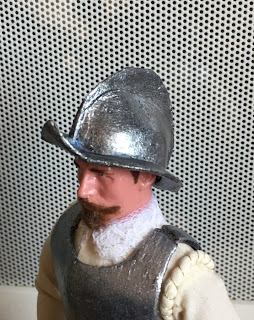 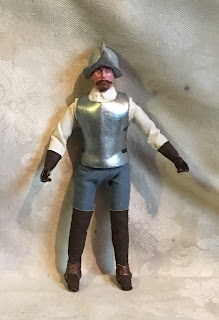 In total I have made just over 1200 dolls (1203 all together I believe.) I didn't know I was getting that close to a milestone so #1200 is a judge doll. The last doll of 2018 was this rainbow design western pleasure doll. She was stuck in my head and had to come out. I am happy that she came out almost just how I pictured her. 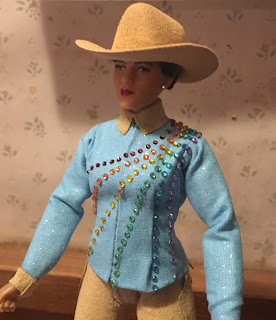 In February I participated in NaMoPaiMo for the first time. I am not really a painter so I did not have high hopes for the outcome of my model. 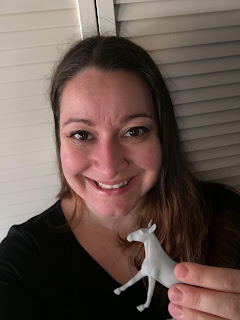 Still, my spotty mule is not bad. He is not great, but he is not bad. I am planning on entering NaMoPaiMo again this year. If nothing else it's a lot of fun painting "with" so many people! 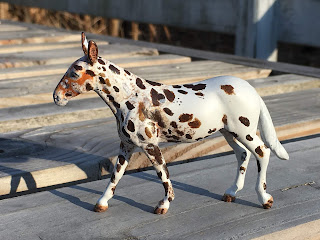 I even painted my hair in February. I have missed the pink. Also, looking at myself now, and how far the pink has grown out, reminds me how fast my hair grows. 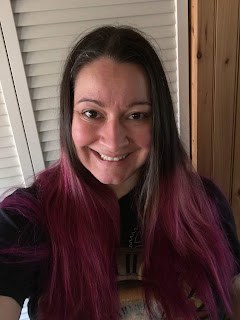 This was the year Travis proved he can make absolutely anything look good. Even the little roll-up sunglasses they give you at the eye doctor. Elecktra and I actually had the appointment but Travis wanted the sunglasses too. 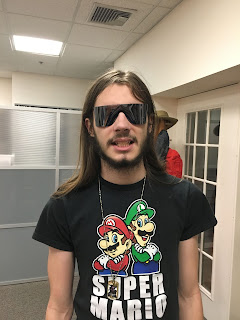 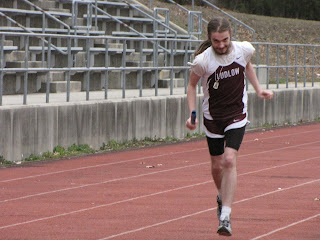 and was definitely part of the team. 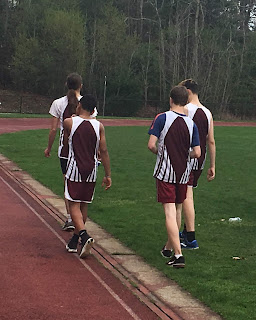 In total I made just 20 Western Pleasure dolls. There were times when I felt like all I made was Western pleasure dolls. I guess I imagined that. 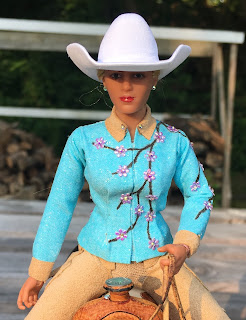 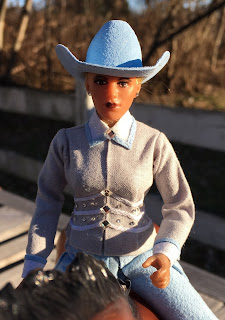 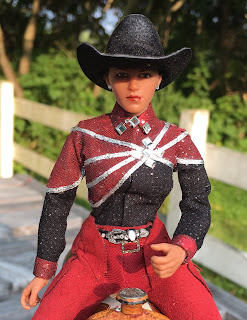 I did some chaps and chinks with stamped yokes. I did work the end of last year on learning how to tool, but I am not great at it in people-scale. Doll scale remains something that is beyond me. Maybe I can find time to do more practice. 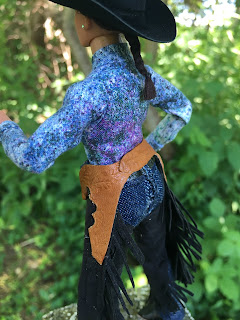 
I only made 5 cowboys, some of them were bendy 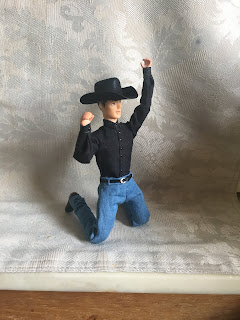 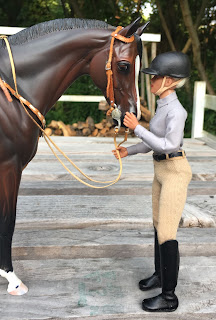 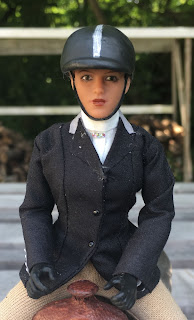 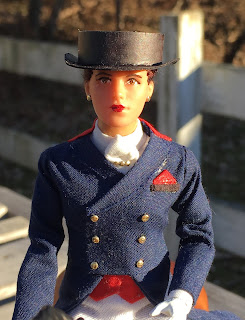 I also made 5 western youth dolls, 9 casual western rider dolls, and just one showmanship doll. In all I made 93 dolls in 2018. Not bad for a year when a lot was going on.

I sculpted these hugging bunnies for a good friend of mine. They were based on a cartoon another friend of ours posted on Facebook. I think they are cute. 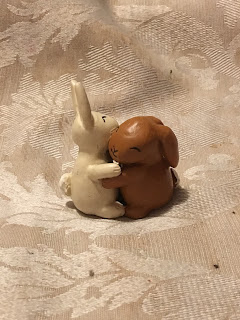 My husband started a T-shirt and sticker business. I got some fun stuff from him and tried to help with promotions. 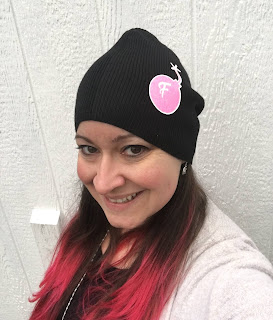 I got to hang out with Morgen again at TRXC. I am sure I have some "better" pics of us but this one amuses me. 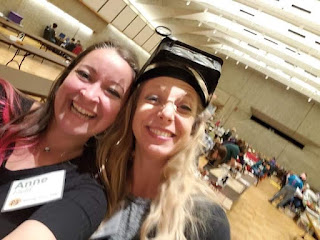 Morgen was judging performance and while she liked my vaulting set-up, which was also new for this year, she did recommend a tweak which I am happy to say looks great! 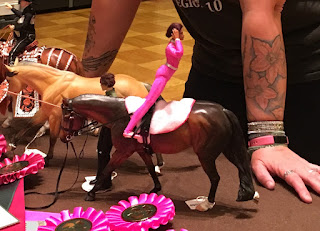 The neatened up pad makes the entire entry look more polished. This also proves that often, if the judge gives you advice, following it can pay off! 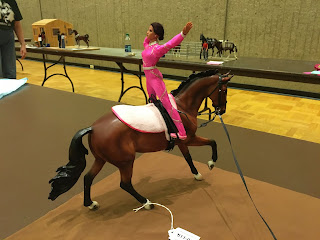 Later in October Travis and I went to the Best Buddies dance. He is such an awesome pirate! 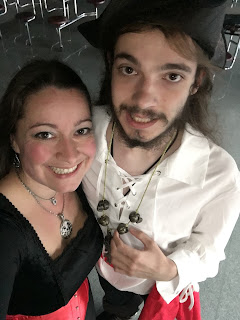 I went to some horse shows 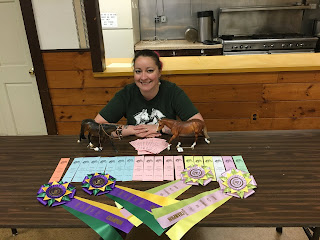 Did fairly well showing between 1-3 horses at each for a super low-stress experience. 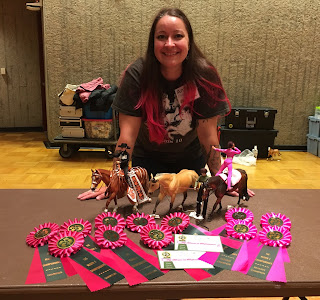 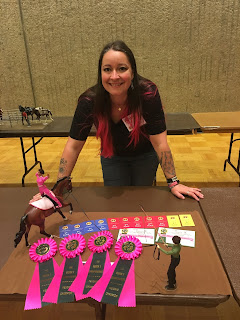 In the end I have also managed to lose 37 pounds this year. Hoping to lose a bit more next year. I am actually very happy with how 2018 turned out. I had some really fun times with shows, the track team, random silliness and good friends. We had 6 full weekend tag sales to downsize after the purging of the house we did in July. We still have some more stuff to get rid of and will likely find more as time goes on. Maybe Spring will bring some more tag sales. Who knows. Not all of this year was perfect, no year is, but it was pretty great. Next year is bringing some big milestones. I'm turning 40 in March. Ethan and I will have been together 20 years in April. Elecktra turns 21 in May. Travis will graduate high school in June. In September Ethan and I will also have been married for 10 years. Hopefully I can get lots of dolls made and some new projects I have in the works will turn out well. Here's to hoping for an awesome 2019!