TRXC or the The Region X Championships, is one of my favorite times of the year.  For one thing it's my biggest selling weekend of the year and I get to actually interact with customers. That is a rare thing for a business that is largely Internet based.
I had a really great  display of my sales items but completely forgot to take a photo of it until about halfway through Saturday. Oops. Maybe next year I can remember to get one at
the start. 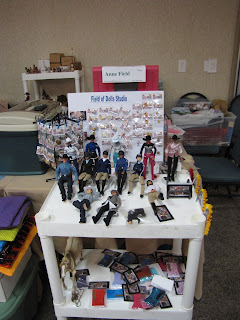 TRXC is also great because where else can you wear a tiara and have everyone act like it's completely normal. (photo by Kate Cabot) 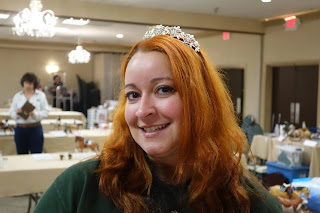 And once in awhile really awesome goodies show up on your table when you are not looking. These fantastic boots were made by Darleen Stoddard. I may need more boots of all kinds from her. 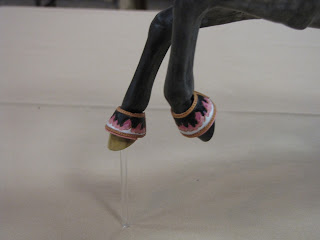 But of course TRXC is also a big show. Actually, it's two big shows. There is the regular open show with a fairly full class list and there is the stakes show. For the stakes show you need to have a region X card that was issued at a Region X show in the past 3 years. You put it up with your entry, a steward comes by to check it against your horse tag and the class is judged as usual. I had a crazy plan for this year's TRXC. I was going to show mostly just in the stakes classes but I was going to show every qualified horse I had. That lead to shameful things such as having to ask to borrow dolls from people. Luckily for me my good friend Joan Fauteux had everything I needed to borrow and since she was hosting she couldn't show and didn't need any of her things.
The other thing I borrowed were photos. I don't always get the best photos and I don't know how to improve them. So when I had the opportunity to use some really excellent photos for this post I jumped at the chance. The first stakes section was patterned performance. I had 3 entries. This first entry is Bootlegger. He is a Rose Reiner painted by Meghann Lorei. His saddle and boots are by an unknown maker. His bridle was made by Danielle Hart, the saddle pad by Elise Partenan and I made the doll. They managed Reserve champion is a class of 11. (photo by Sara Roche) 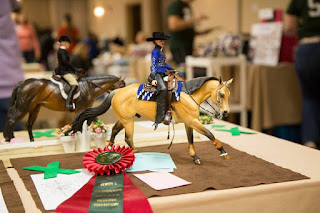 Mocha Latte also entered the patterned performance stakes class with her dressage entry. The tack is by Jennifer Buxton, I made the doll and the flowers and I borrowed these dressage rails from Joan. Latte is a Loping Leggs resin sculpted and painted by Liesl Dalpe. Top 5 is not to shabby! (photo by Sara Roche) 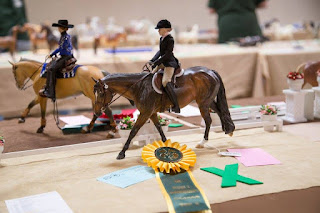 Bootlegger also did a working cowhorse entry in the Action Western Stakes class. I switched out his bridle for one made by Pam Perkins (reins by me) and my Elecktra doll that I made. Another top 5. (photo by Sara Roche). 10 in the class. 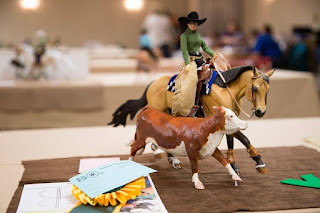 Hurricane Deck wanted to play too. He is wearing a saddle by Pam Perkins, with a saddle pad by Sara Kucharski. Boots and bridle by an unknown maker (because I can't remember which bridle this is and can't see if well enough to say who made it). I made the doll. I have gotten really into roping lately. It's a fun entry to study. 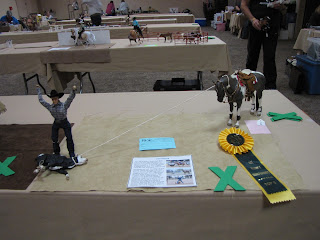 Next was the Action Enlish stakes. Halestorm entered with her Handy Hunter entry. Her tack was made by Pat Coulter, the beautiful jump was made by Marci Driscoll (I made the weird topiaries, don't blame Marci for those) and I made the doll. (photo by Shane Langbauer) 9 in the class. 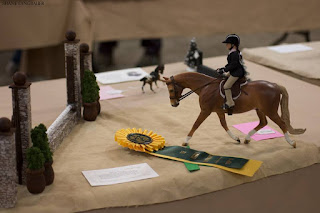 Phantom also entered Action English with her jumper entry. She is an Eclipse resin sculpted by Mindy Berg and painted by Joan Yount. Her tack was made by Pat Coulter, her boots by Jennifer Buxton and her bell boots by Jana Skybova. I made the doll and the jump.
Two top 5's in a class I was thinking about skipping isn't too bad at all! 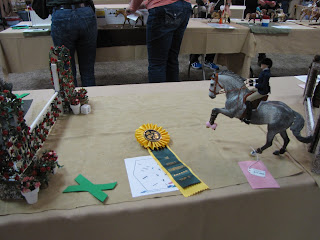 Phantom entered the games class with this housewife Scurry entry. Reserve champion in a class of 13 made me happy. (photo by Shane Langbauer) 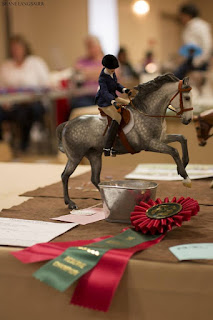 Next up was the pleasure Stakes class. There were 19 entries in the class. First up for me was Enchanted Eve. She is a Victrix resin painted by Angelica Nelson. She is wearing her awesome side saddle tack made by Jennifer Buxton and a doll by me. 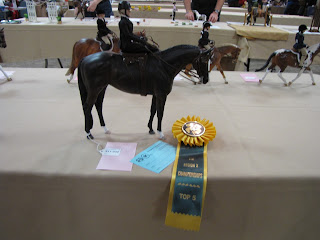 Bootlegger also played in the stakes class. I was very pleased with my top 5's! 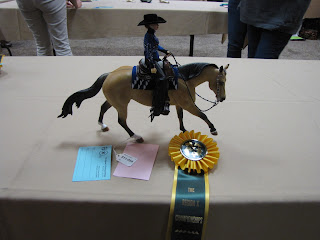 As a point of interest Mocha Latte entered the open western pleasure class with a couple of her nearly identical friends. We got a kick out of the 2nd, 3rd, 4th placing of this line of Loping Leggs. 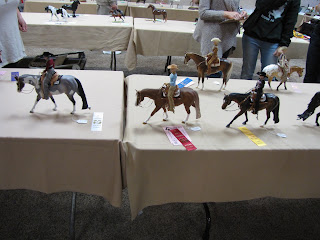 The Trail Stakes class had 19 entries. Mocha Latte was wearing tack made by Pam Perkins and a doll by me. The poles were mostly made by Elizabeth Mace but one was made by Joan Fauteux (for me, not one I borrowed). I was more than happy with Reserve Champion. (photo by Sara Roche) 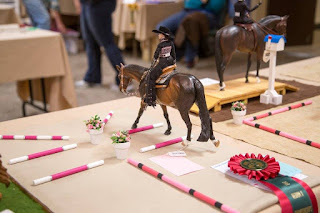 Phazes of Godiva (a Godiva Resin sculpted by Morgen Kilbourn and painted by Liesl Dalpe) also entered the trail stakes class. She didn't place but I wanted to share this photo (by Sara Roche). She is wearing borrowed tack so I don't know who made it, a saddle pad, saddle bags, doll and diorama by me. 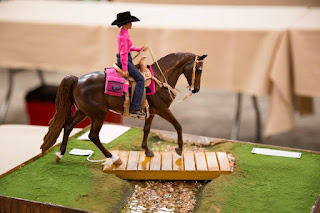 This trail entry/photo had to be shared as well. Enchanted Eve still wearing her lovely side saddle tack. (photo by Shane Langbauer) 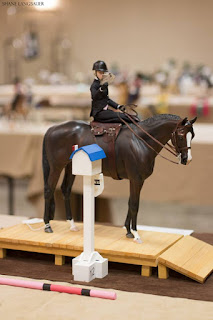 The other performance stakes class had 19 entries. My first entry was Flash in the Sky, a Matriarch resin painted by Joan yount wearing tack by an unknown maker and a crazy super bendy doll made by me. People like the super bendy doll. This extreme cowboy entry got a top 5. 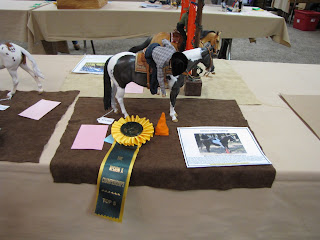 Bootlegger also entered the other performance stakes with an Extreme cowboy entry. He got Reserve champion in the class. I made the cowboy curtain :) 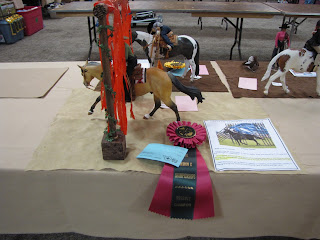 My last entry was Hurricane Deck with his Native American costume by an unknown maker, doll by me, in the costume stakes class. I nearly skipped it because I was tired but they got a top 5 which made me happy. 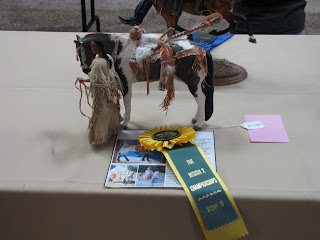 As many of my friends know I was chasing a final NAN card for a superior event horse award in showmanship with my OF Lady Phase Lady Liberty. I did finally get that last card at NEPC and was very excited to finally get it. Lady Liberty now gets to retire but I figured she could have one last show and it was very worth it!
I showed Lady in the open showmanship class even though I didn't need any more NAN cards. I was happy I did though since she got to go out with a bang. Not just another NAN card but a first place! I made everything in the entry other than the horse and the footing. 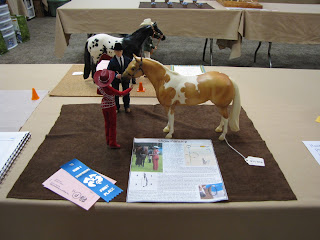 Lady Liberty also went on to get a top 5 in the OF other performance stakes class out of a field of 21 entries! (photo by Shane Laungbauer). 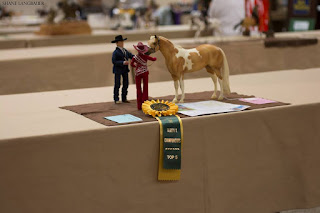 I do have some photos of halter day and I may share them at some point. Mine are not great but I did get some nicer ones from Shane and Sara. The results of performance day was 10 top 5's and 4 Reserve champions. I got at least 1 top 5 in each stakes class I entered. It was a really good day for me for showing!

Posted by Field of Dolls Studio at 9:08 AM 2 comments: