This past weekend I attended the Quabbin Valley Performance Open held in Spencer, MA and hosted by Joan Fauteux. Joan has been hosting this all performance show for many years and it's one of my favorites. This year we had more people than normal, including some that traveled a long distance from other regions. It was wonderful!

I have been showing performance for a lot of years and for the longest time my goal was to figure out how to show the same horse in enough classes in a division to have a shot at a champ or reserve champ rosette. I have also made myself crazy rushing around and have forgotten little details (like jump flags, taking boots off for classes where they are prohibited, etc) so this show my goal was different. I wanted to make sure I didn't forget those little details that are so important to a good performance entry.

My first class of the day was Judged Stockwork. I decided to do a Reined (working) Cowhorse entry. So this entry started with research. I didn't really know much about Working Cowhorse so I learned about it. I watched a YouTube video on Reined Cowhorse, I found a pattern that was commonly used and I found photos that I thought would help emphasize what my horse was doing. I made my documentation, had a detailed list of what the horse should be wearing (even made closed reins for one of my bridles!) and then on show day it turns out none of my cows were quite right so I borrowed this cow from Ann Harris. I love Region X!

Bootlegger is the horse. He is a customized (by Alicia Miller) Rose reiner, painted by Meghann Lorei. I have no idea who made his tack but the doll is my Elecktra doll wearing some ladies cutting chaps and a borrowed hat. 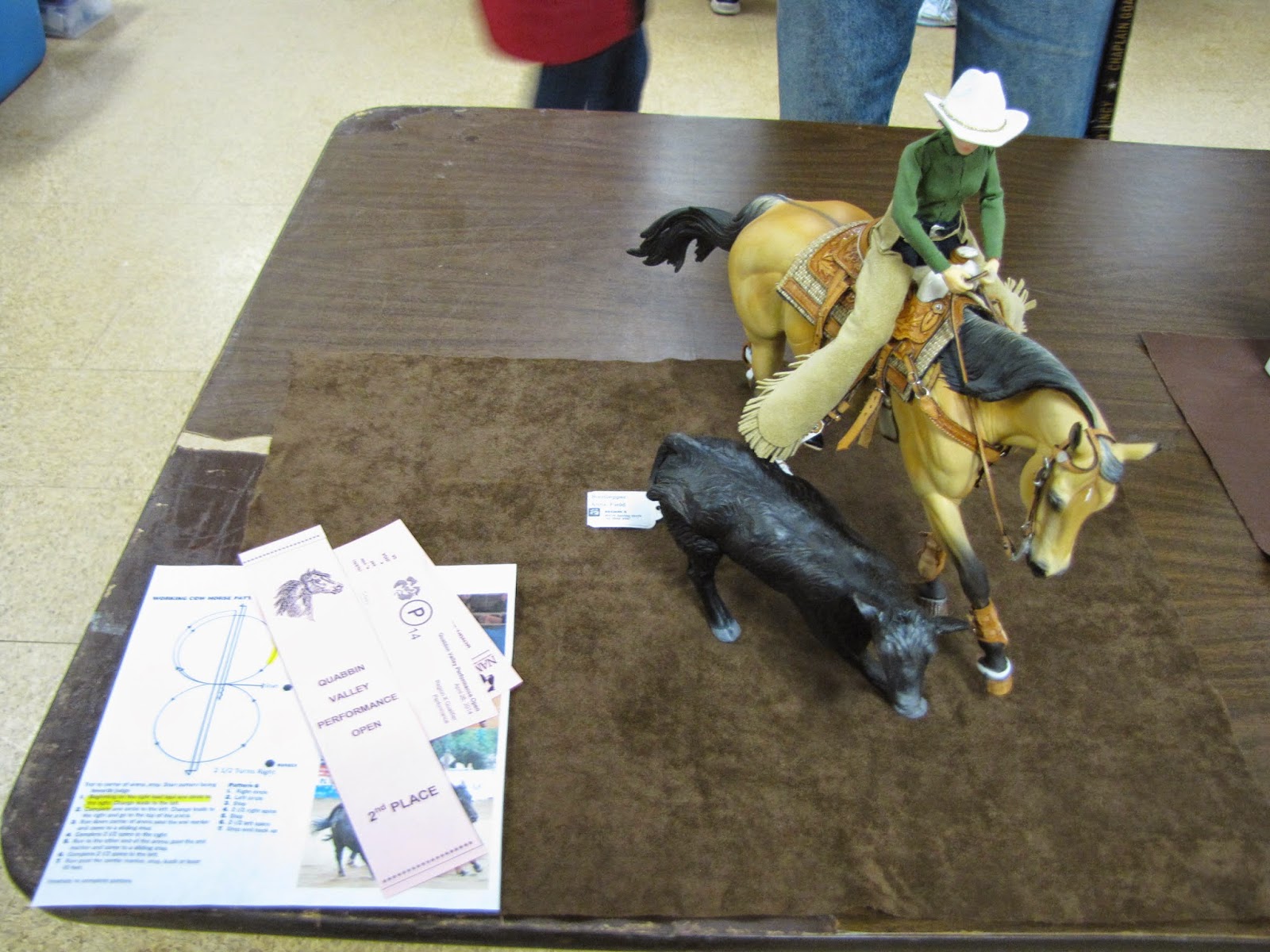 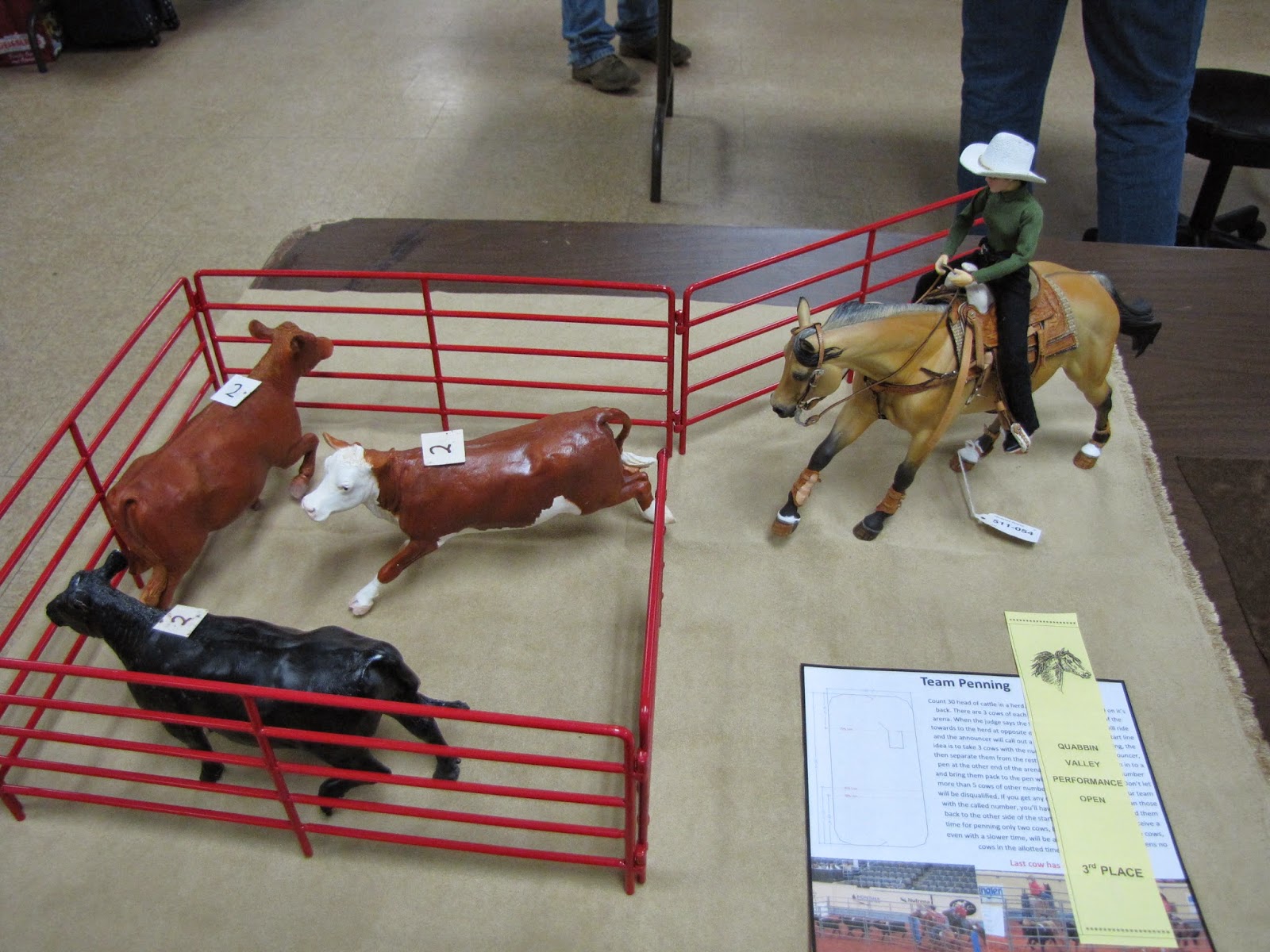 I had a second entry in Timed Stockwork and that was Hurricane Deck with his roping entry. His tack was made by Pam Perkins (not sure on the boots) and I made the cowboy and the neckrope. 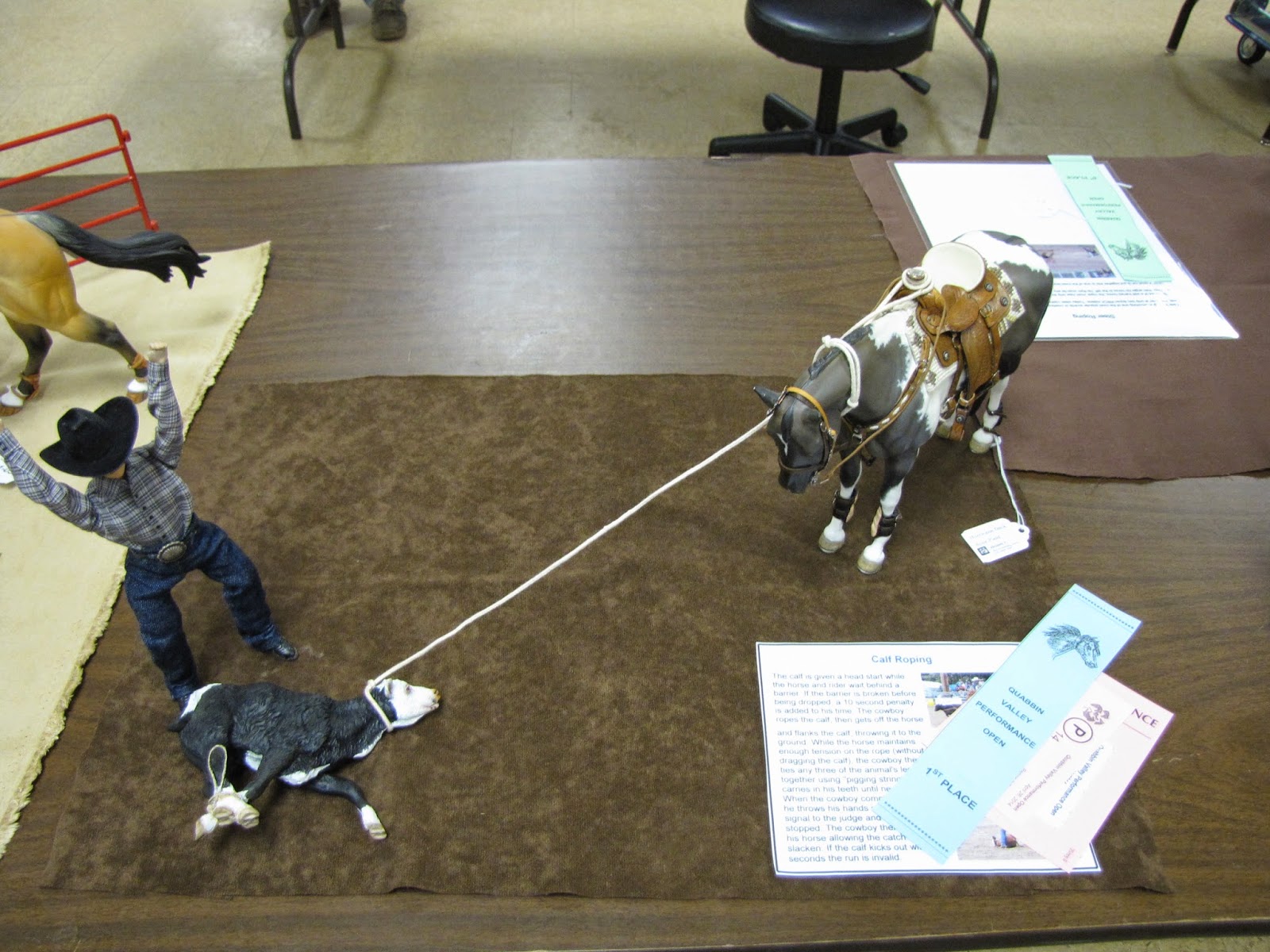 Hurricane Deck also went into non-competetive ranch scenes with his ranch roping entry. This one was fun because I really wanted a standing cow so I asked Ann Harris (again) if I could borrow one. I also ended up borrowing cows from Jackie Rossi, Laurie Lape and Linda White. It just sort of happened. Two cows in this scene are mine. It was good for 3rd place but it was a ton of fun having that borrowed herd on the table. 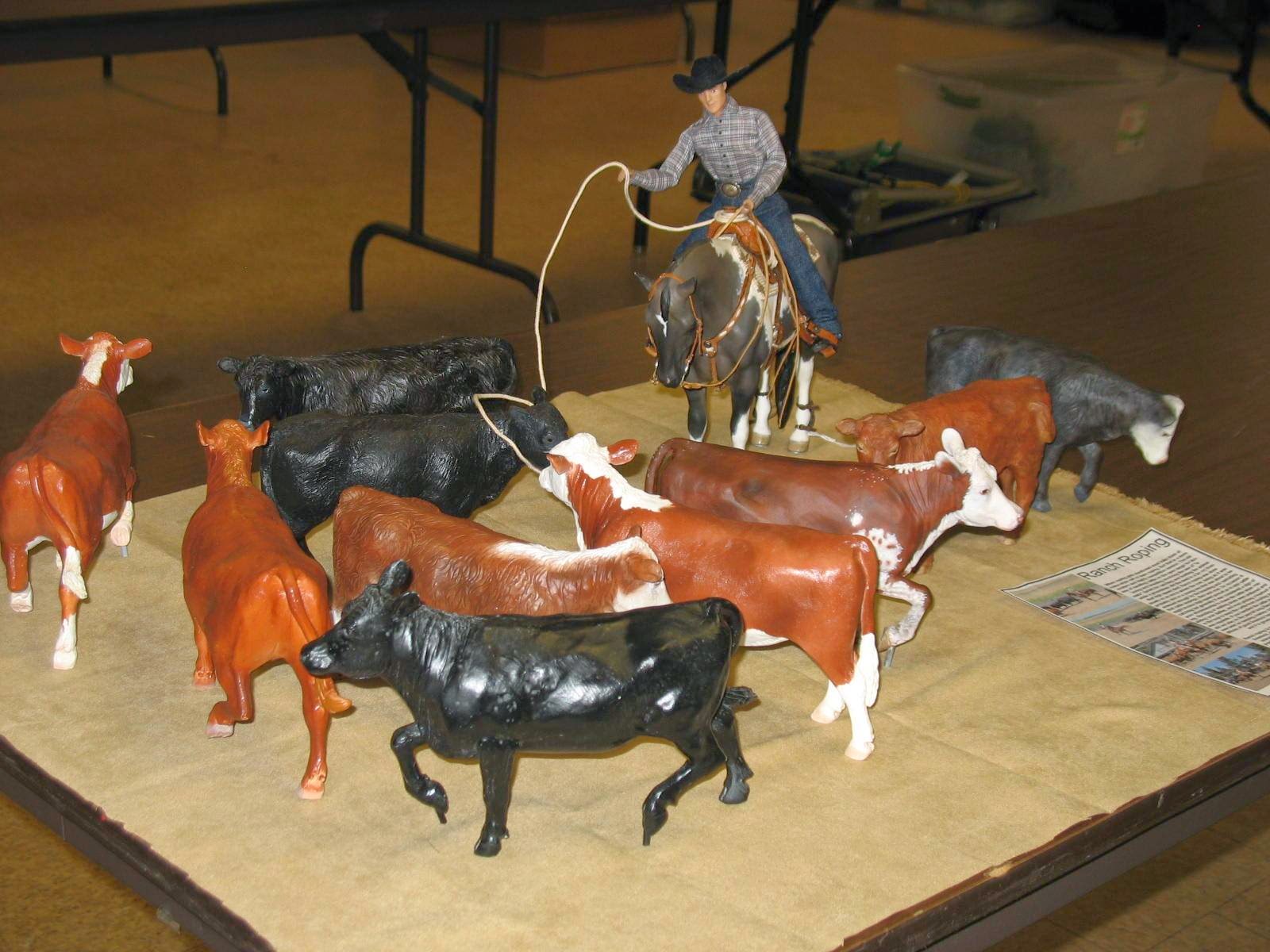 Next was Reining and Bootlegger changed his clothes and got back in the ring. He is wearing a saddle by an unknown maker, a bridle by Danielle Hart and I made his doll. Only 5th place but the class was large and quite competitive. Hurricane Deck went on to receive Reserve champ in the Stockwork division but I apparently forgot to take a picture of that. 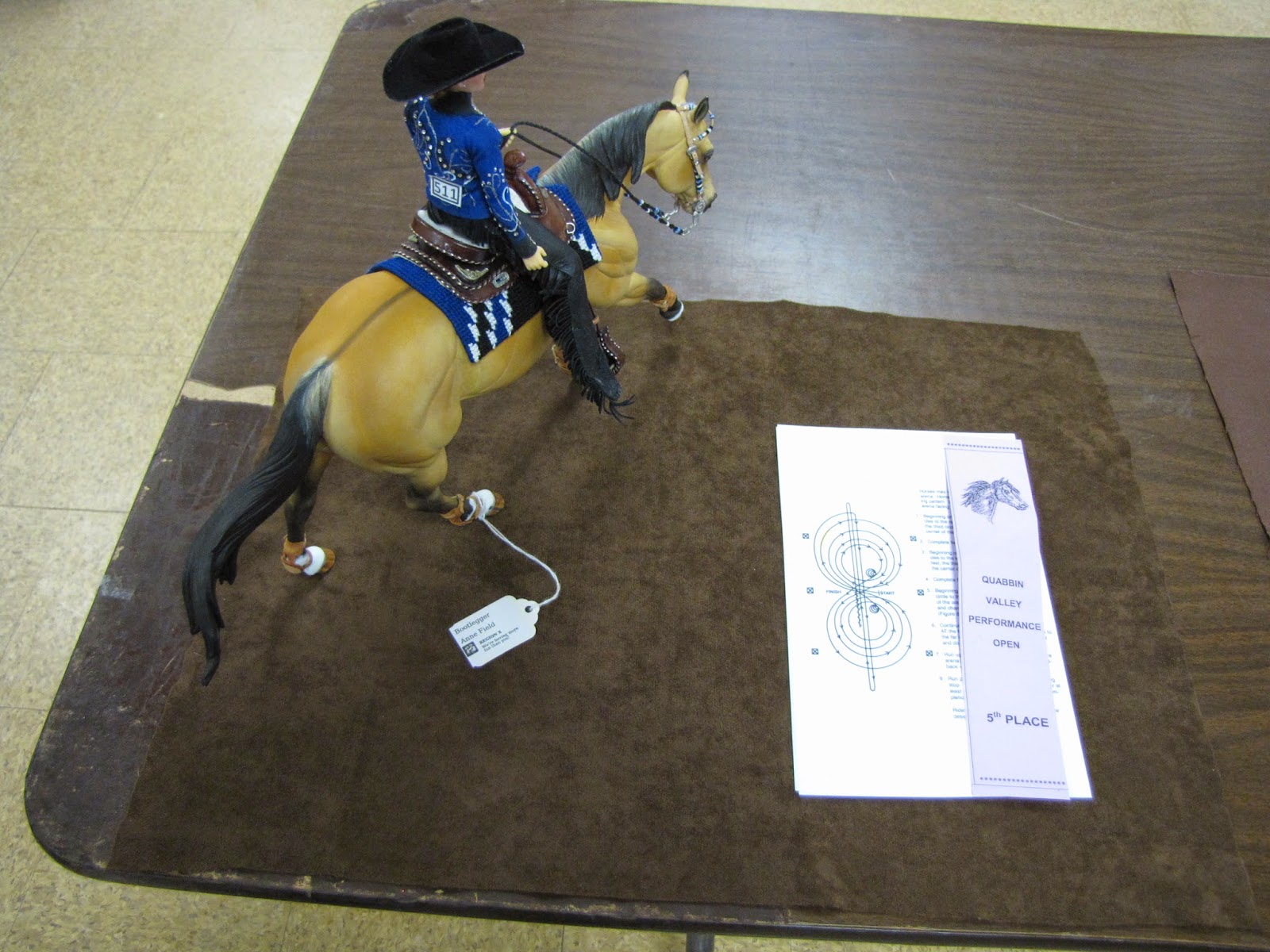 Next was the western division and it was HUGE. My natural trail entry terrified me so much I didn't take a picture. My newly repainted Godiva resin was on a bridge on a not-too-level diorama. She got 3rd for that but she was taken down as soon as the class was pinned. Next was a ginormous Arena Trail class where I had two entries that didn't place. After that was games but I skipped it because I was getting stressed and rushed and that was not allowed for this show. I wanted to do well in the classes I showed in even if I had to skip here and there. Next was other western performance, still no photos and no placings.

Then we had western pleasure-stock type. Mocha Latte did extremely well earning second place in the class. She was only beaten by the undefeated Kahanamoku owned by Marisa Evans. Mocha Latte is a Loping Leggs resin sculpted and painted by Liesl Dalpe. She's wearing a saddle made by Pam Perkins and her bridle was made by Danielle Hart. I made her doll. 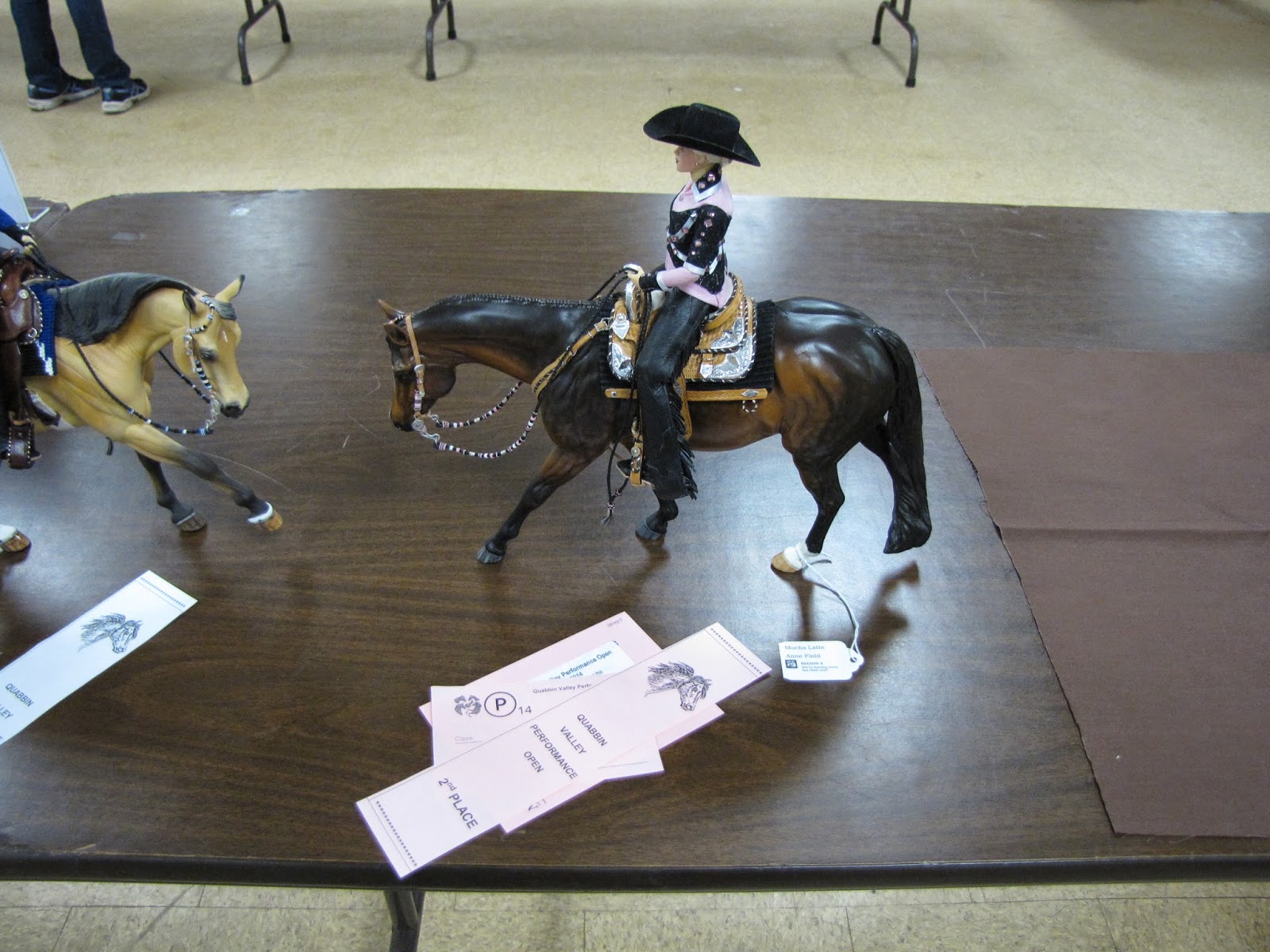 Phases of Godiva is my Godiva resin sculpted by Morgen (Kilbourn) Rossomando and painted by Liesl Dalpe. Her tack was made by Pam Perkins and her doll was made by Joan Yount. 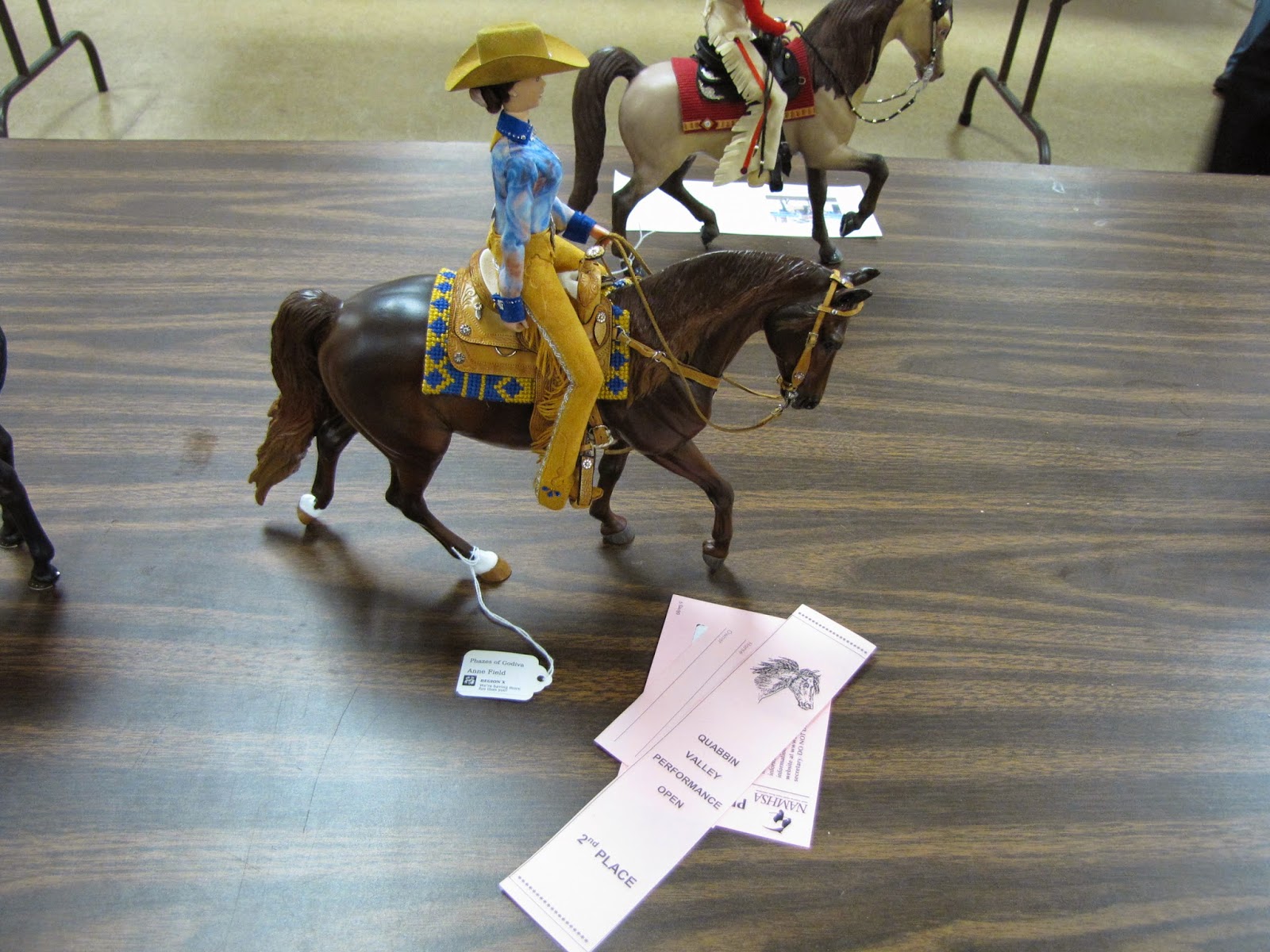 Next up was the other performance division. It started with showmanship and I was determined not to screw up this entry like I did at TRXC last fall. It's those little details I was talking about. My paying attention paid off with a 1st in showmanship. Hurricane Deck was painted by Mindy Berg. I made the halter and the dolls in this scene. 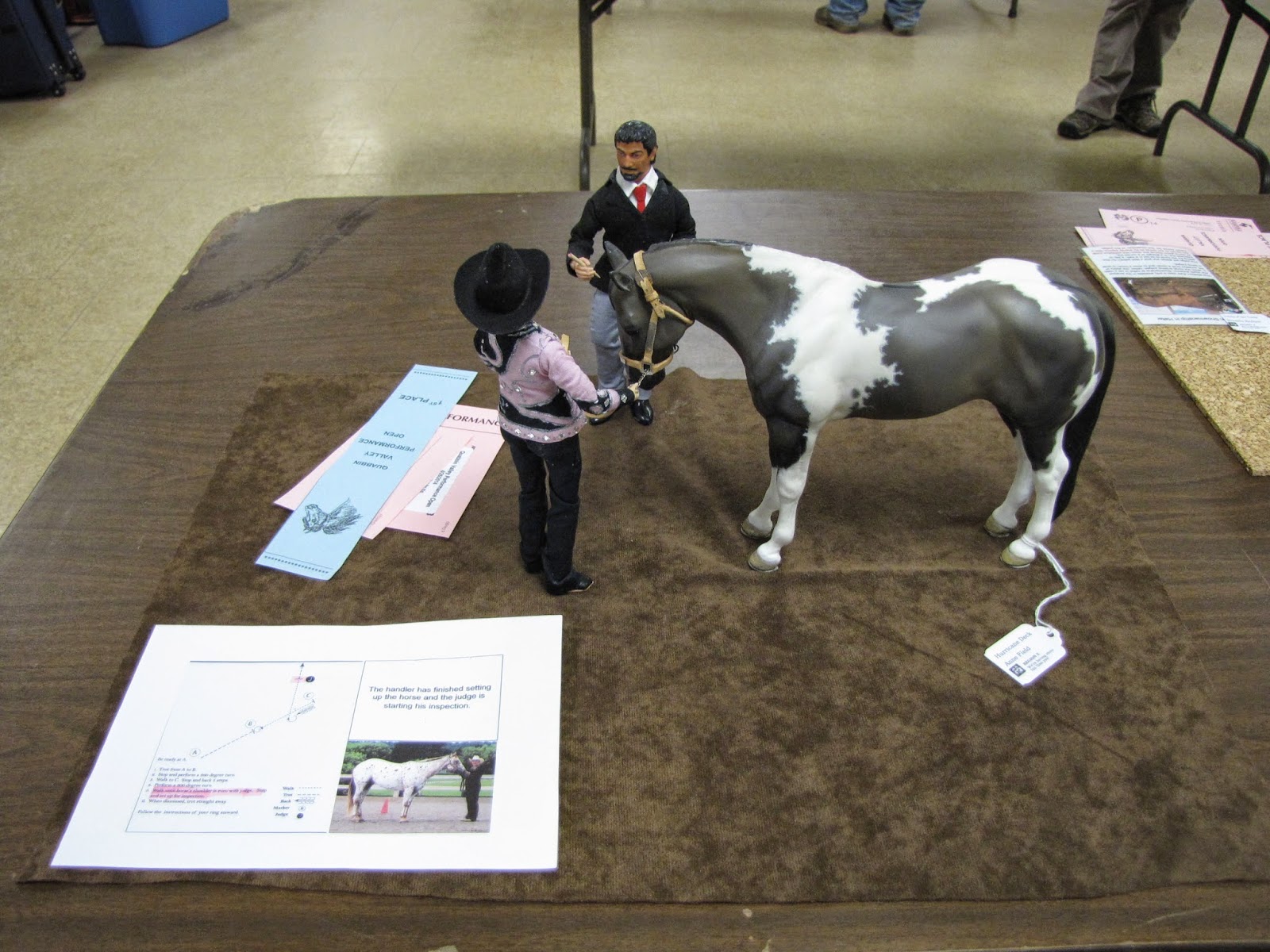 The next class was the scene class. I wanted to do something where I could put my showmanship horse right into the scene without changing anything. And I wanted to use mini food because...well, because mini food ☺. This is a horse show picnic scene. The riders are having lunch and Mary (any doll that is named in documentation is always named Mary for me. Not sure why) stopped by after her showmanship class to visit. Hurricane Deck wants that fruit salad on the end of the table! 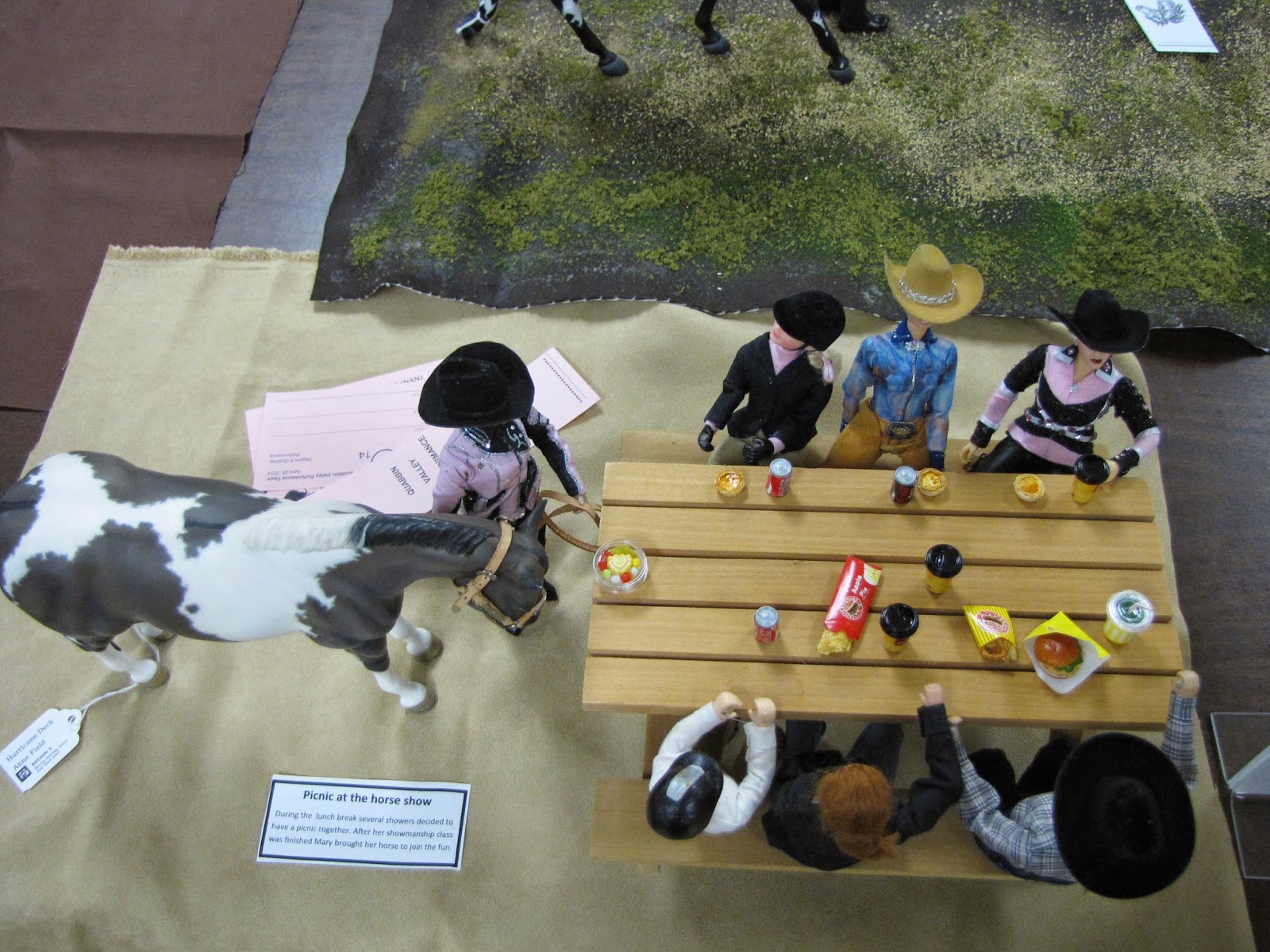 Here's another view of the scene. It was fun to do and a quick transition from showmanship so I didn't have to hold anything up or rush. 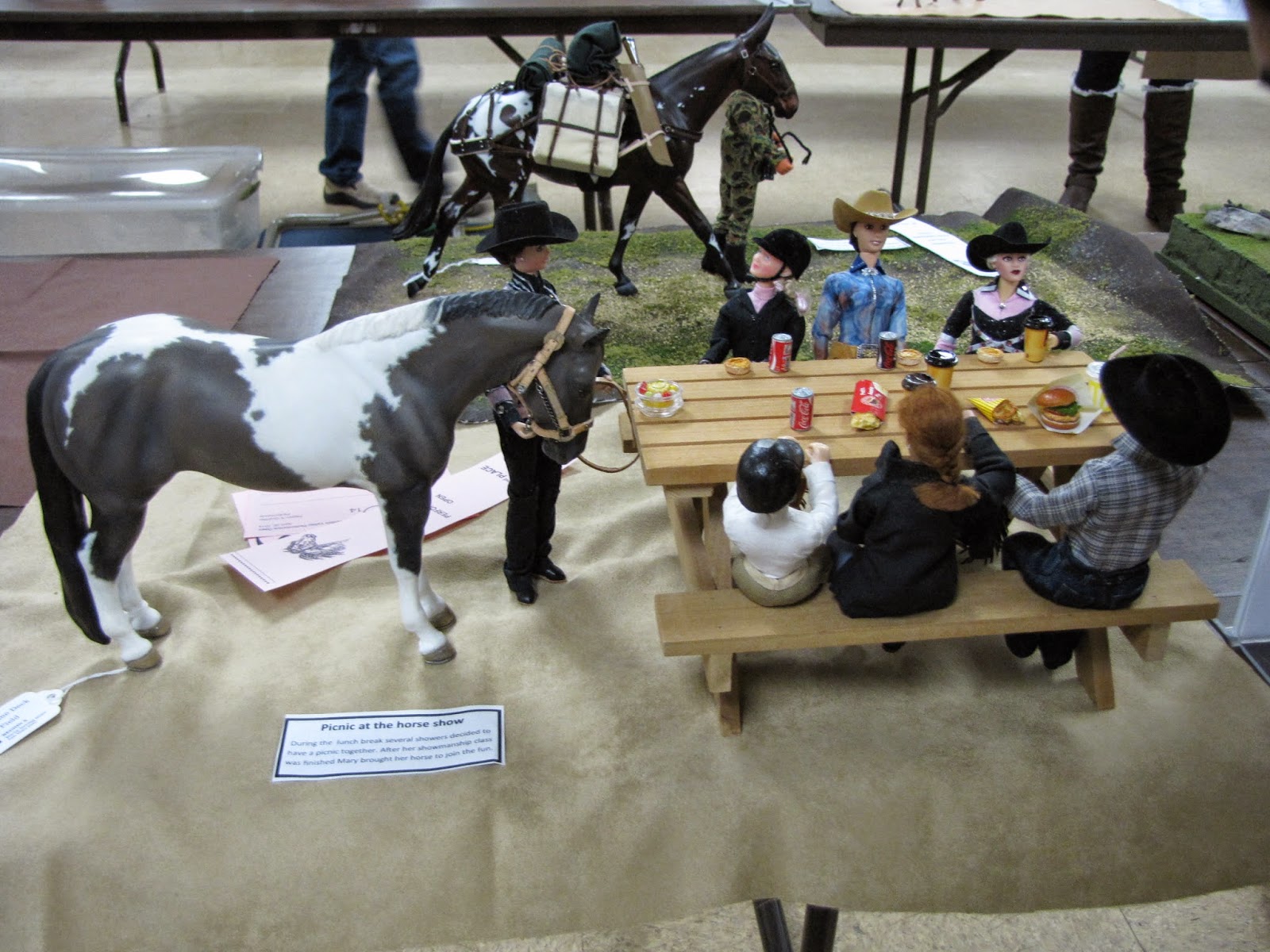 Penelope is my newish Calliope painted by Sophie Nordstrom. She's wearing a pack set made by Sara Kucharski with some accessories by me. The doll is a fisherman Dan doll wearing Mego camo. 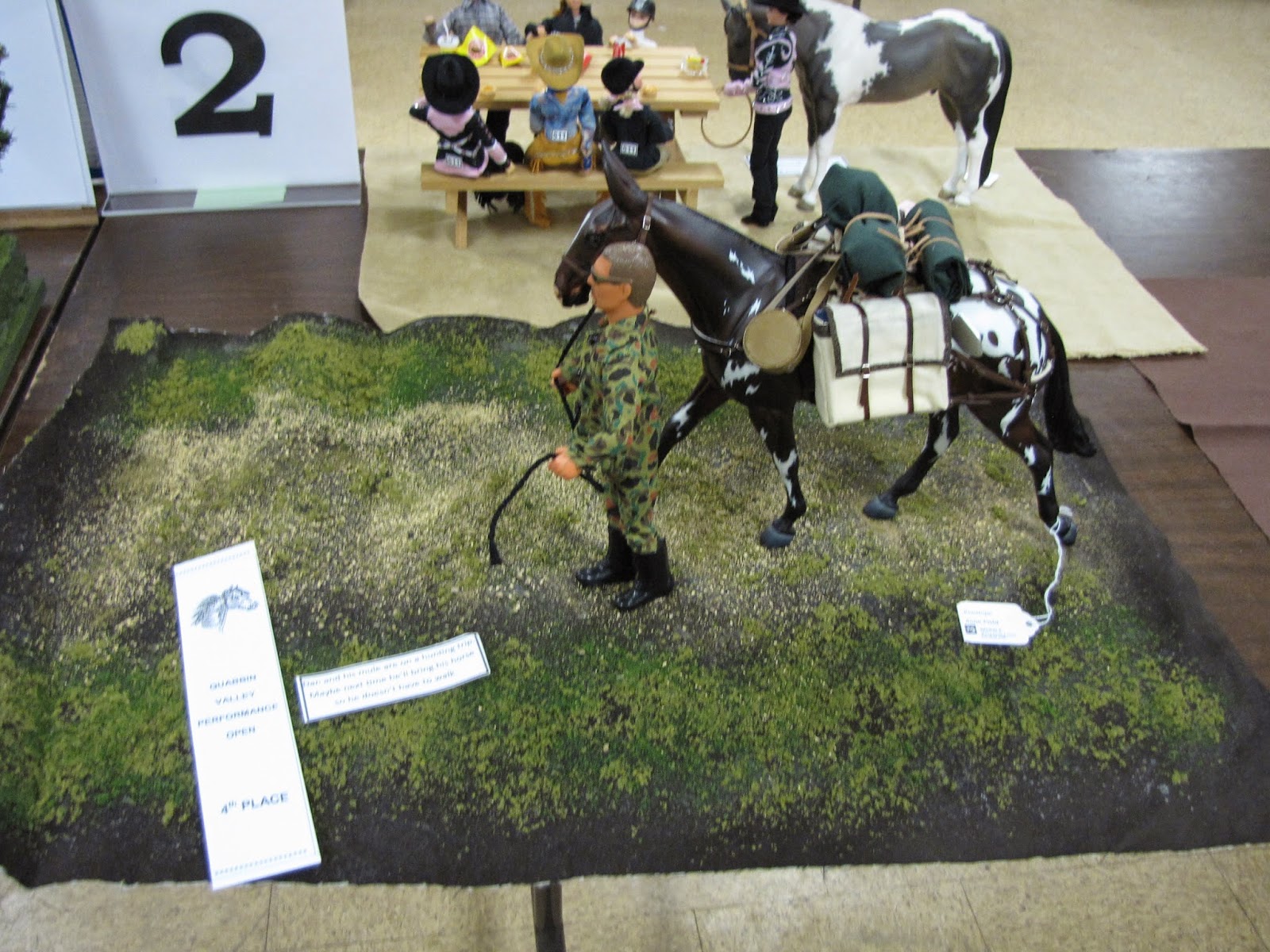 Only good for 4th in the scene class but still fun to set up. My footing is my super clever (and occasionally messy) roll-up diorama. It almost never lays flat. The card says something about Dan being on a hunting trip. 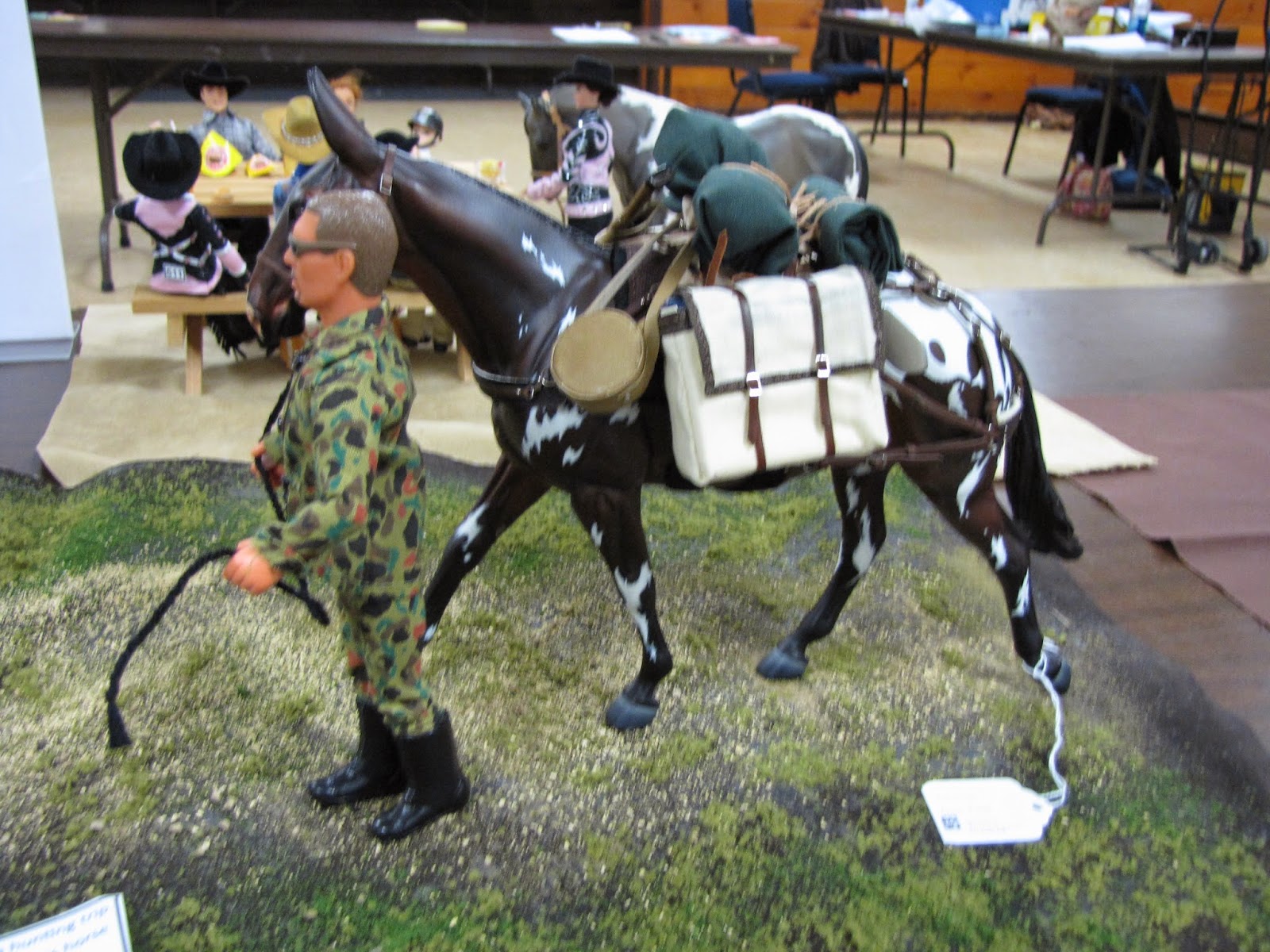 They also did other performance-generic with a packing scene. The documentation explained how packing trips are a great option to see some remote areas that are only accessible on foot or by horseback. My Elecktra doll had fun getting into another set-up. 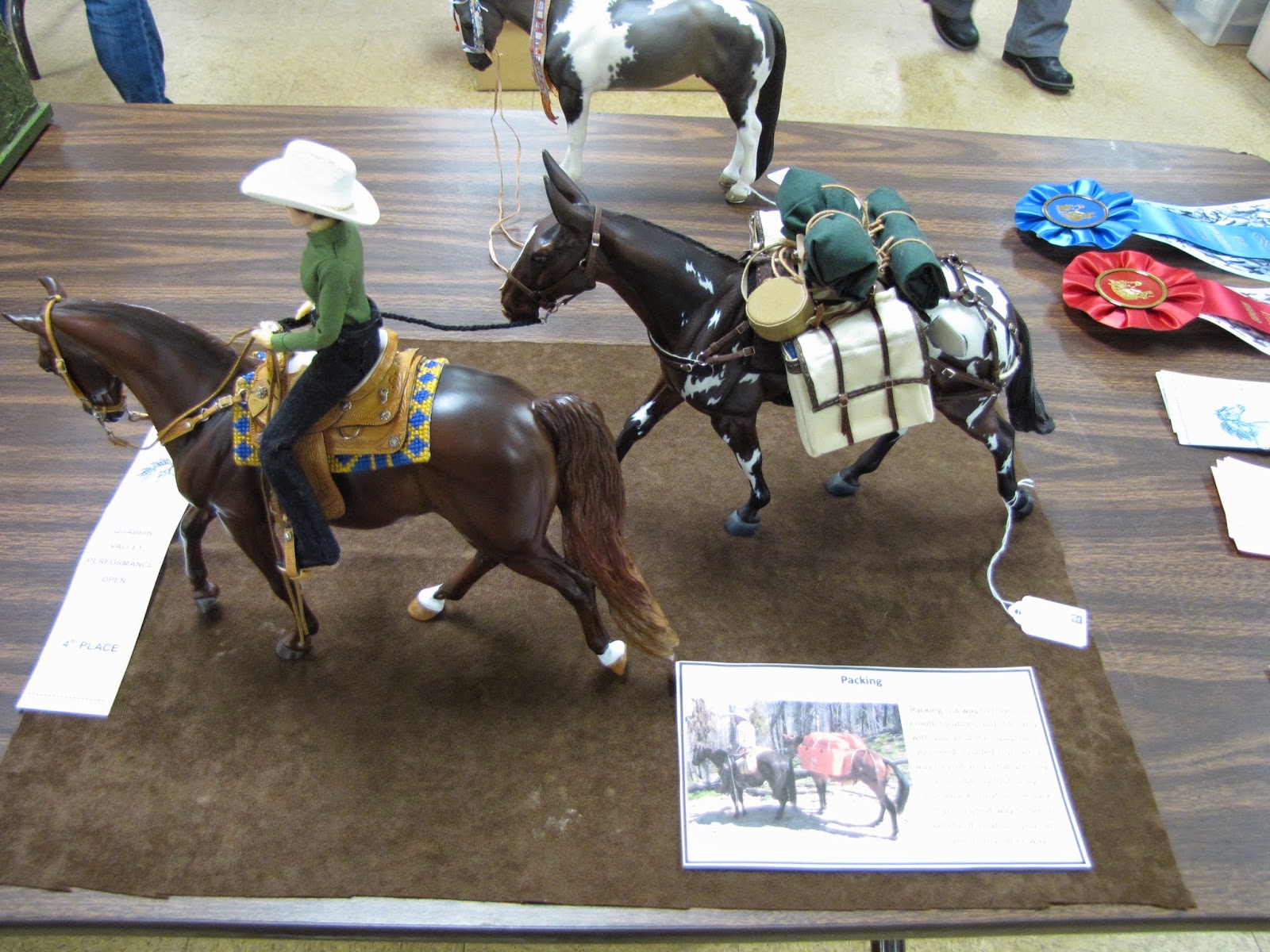 Hurricane Deck (who was getting dressed for costume) was champion in the other performance division. What a great day he was having! 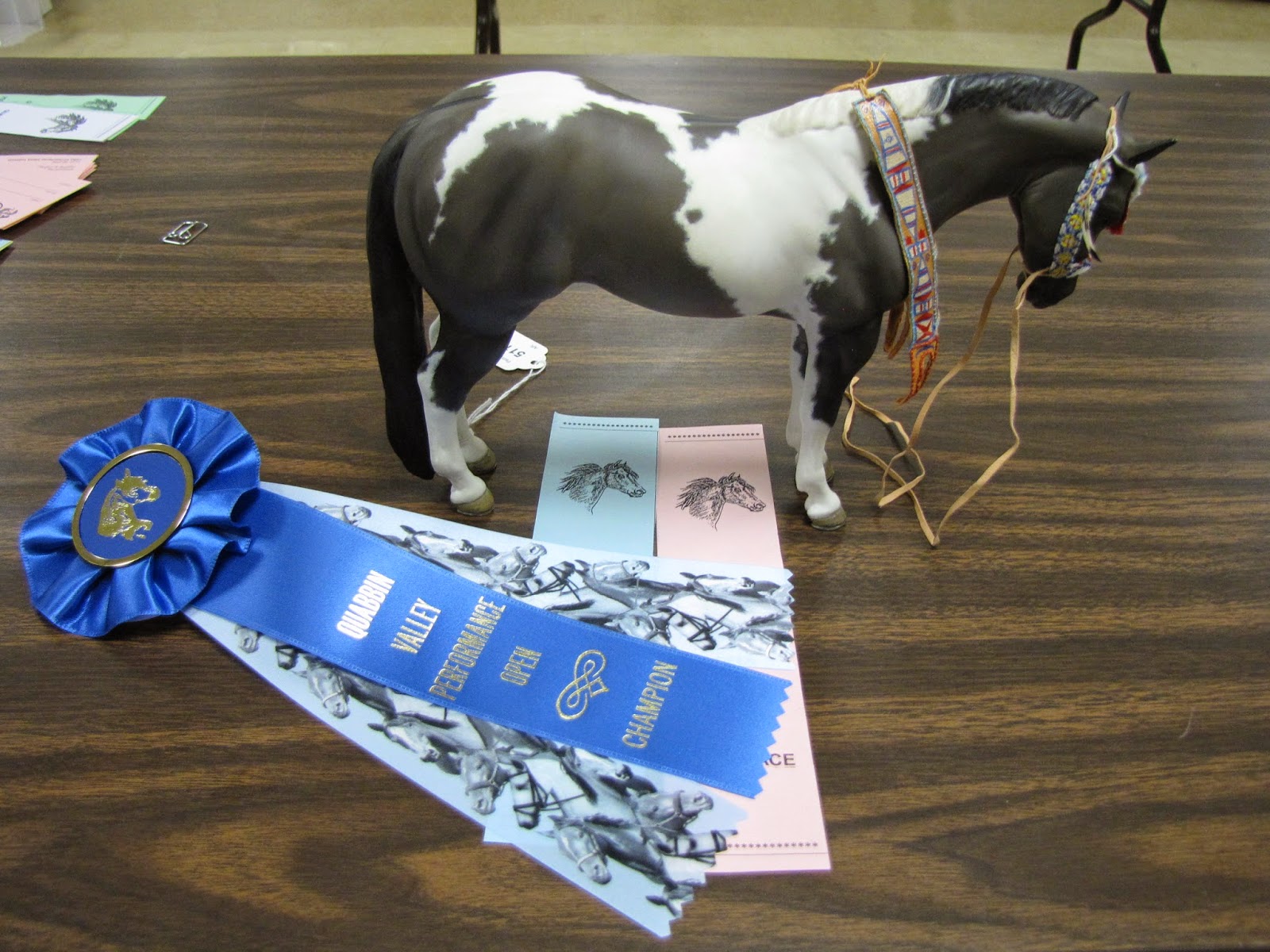 Next up was the sporthorse division. Phantom, an Eclipse resin sculpted by Mindy Berg and painted by Joan Yount, is wearing BCS tack (Jennifer Buxton) and boots by Joan Yount. The beautiful jump was made by Marci Driscoll. I made the doll. I was impressed that Phantom got 3rd place in such a large class. 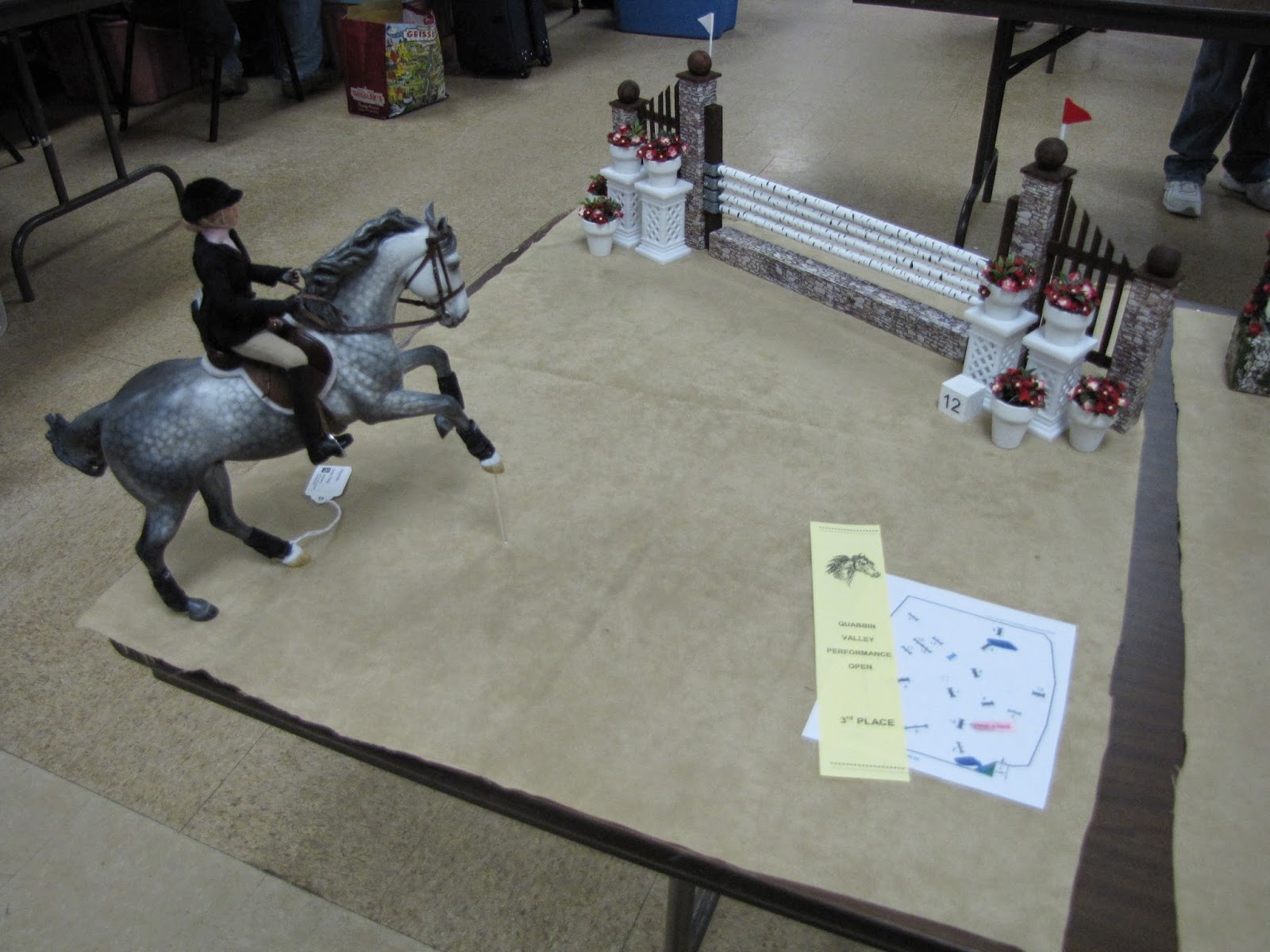 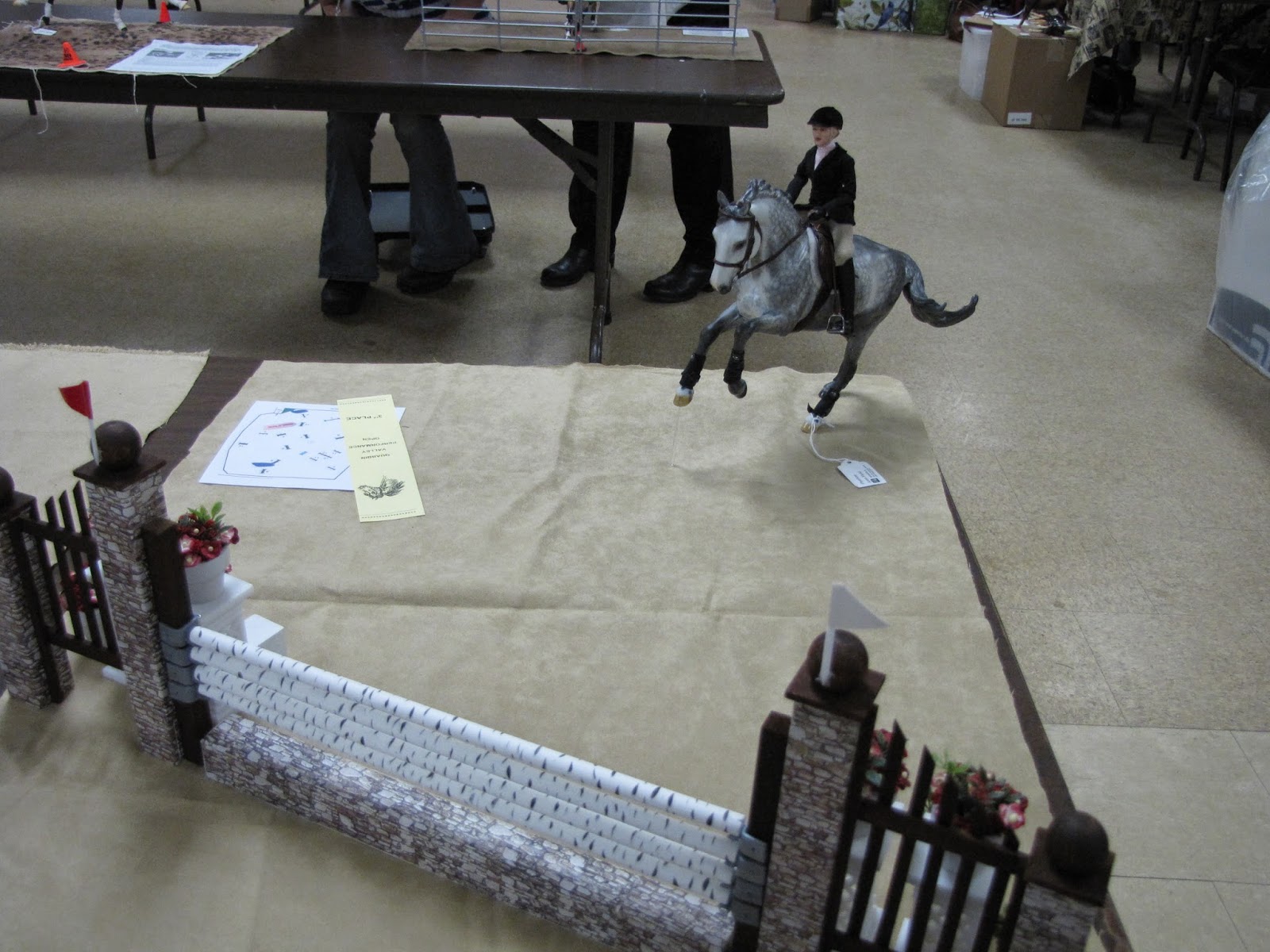 McQueen also got into the jumper class. He is wearing BCS tack, boots are BCS as well, doll and jump are by me. 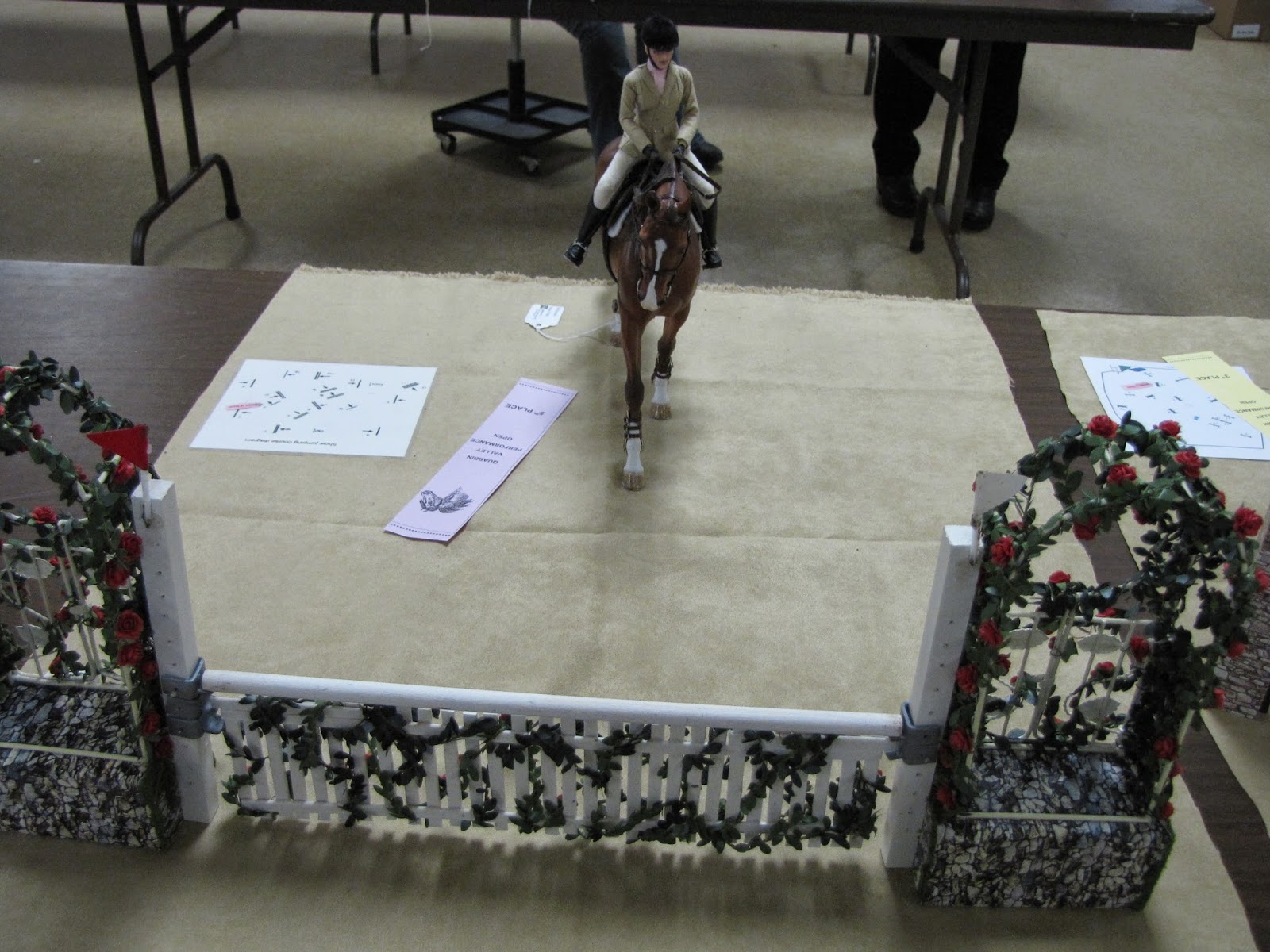 I skipped hunter because I felt moving jumps was just too time consuming so I started to set up for dressage. McQueen (after taking off his boots and switching dolls) managed 3rd place. 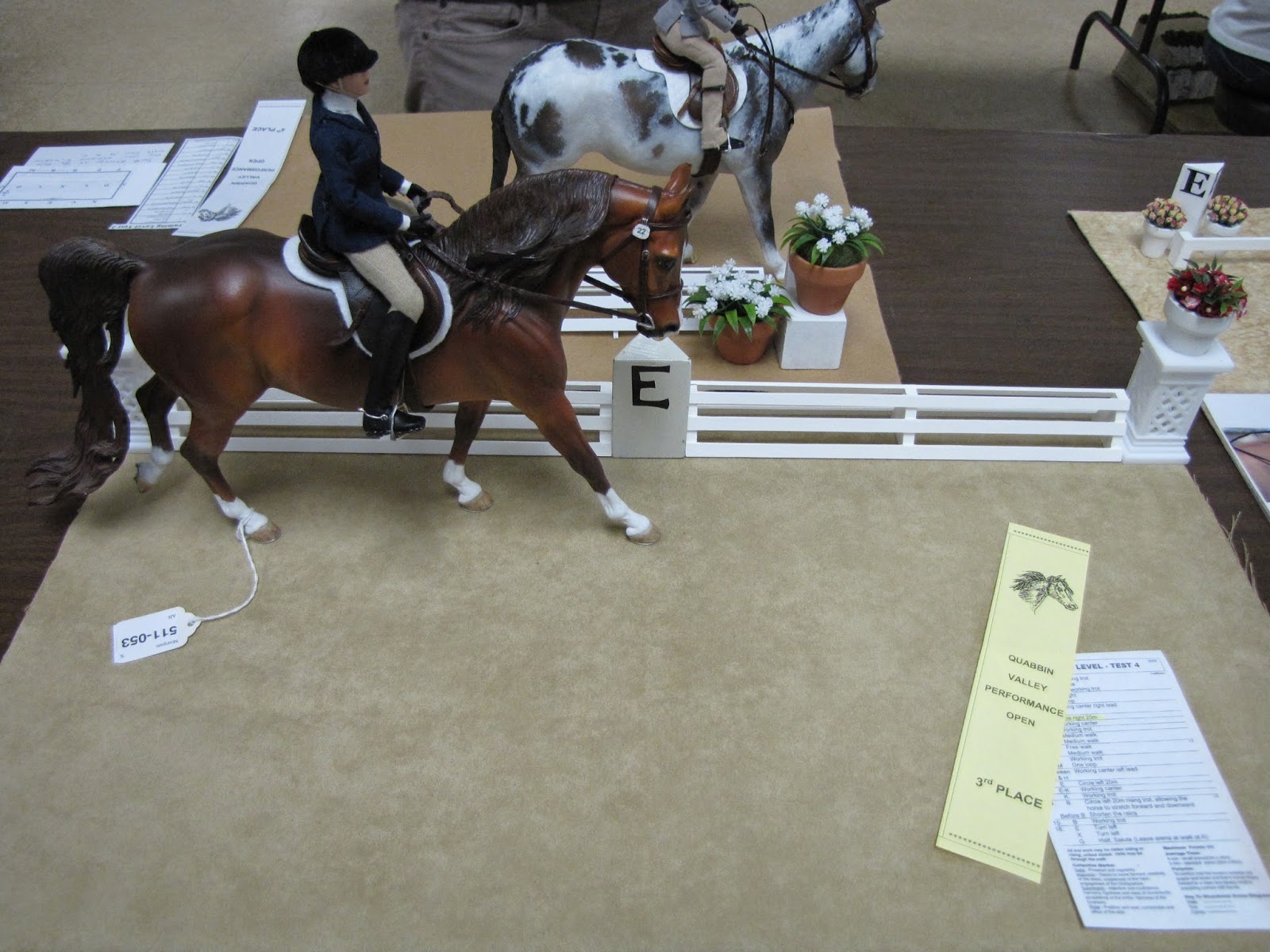 Next up was the English division starting with games. Phantom played with this Housewife Scurry entry. I really like how this entry turned out. 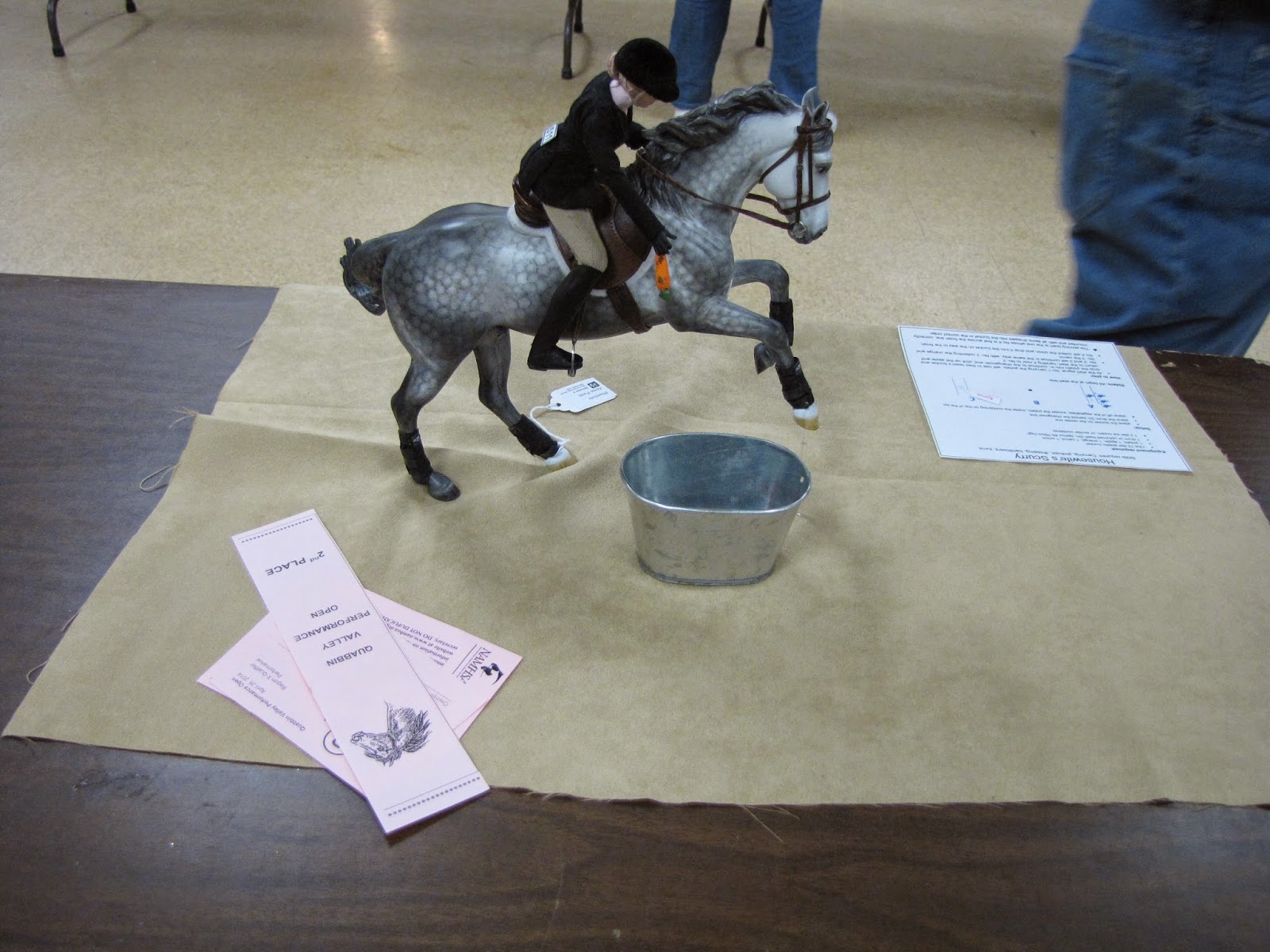 Caramel Latte made an appearance in the Other English class with this therapeutic riding entry. The tack is BCS tack with the halter and dolls by me. My Elecktra doll managed to get into this scene along with my Travis doll. 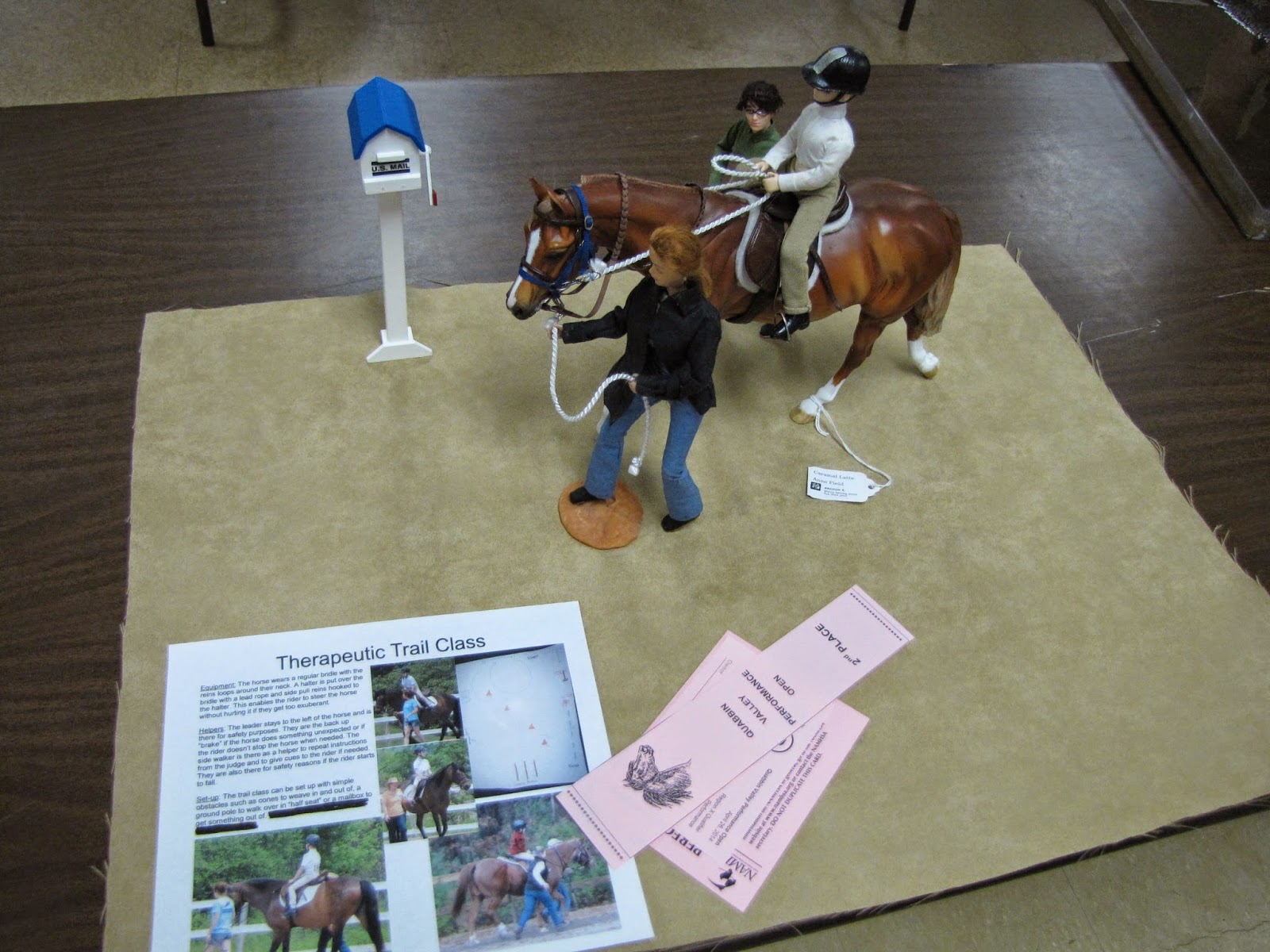 Arena trail was next and Enchanted Eve, painted by Angelica Nelson was in with her mailbox entry. The tack is also BCS tack and the doll is by me. 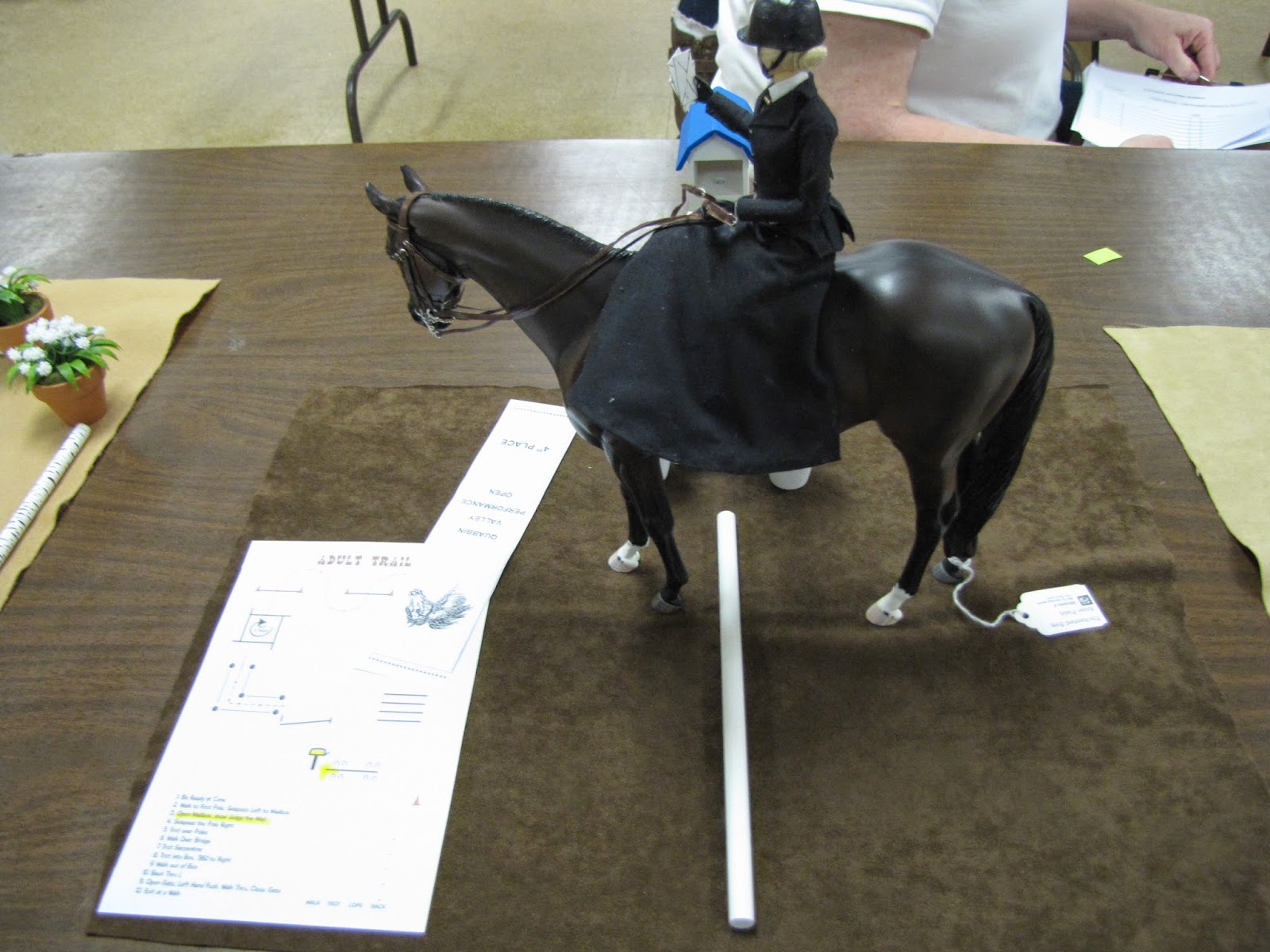 Caramel Latte was in Arena Trail as well with this rope gate entry. 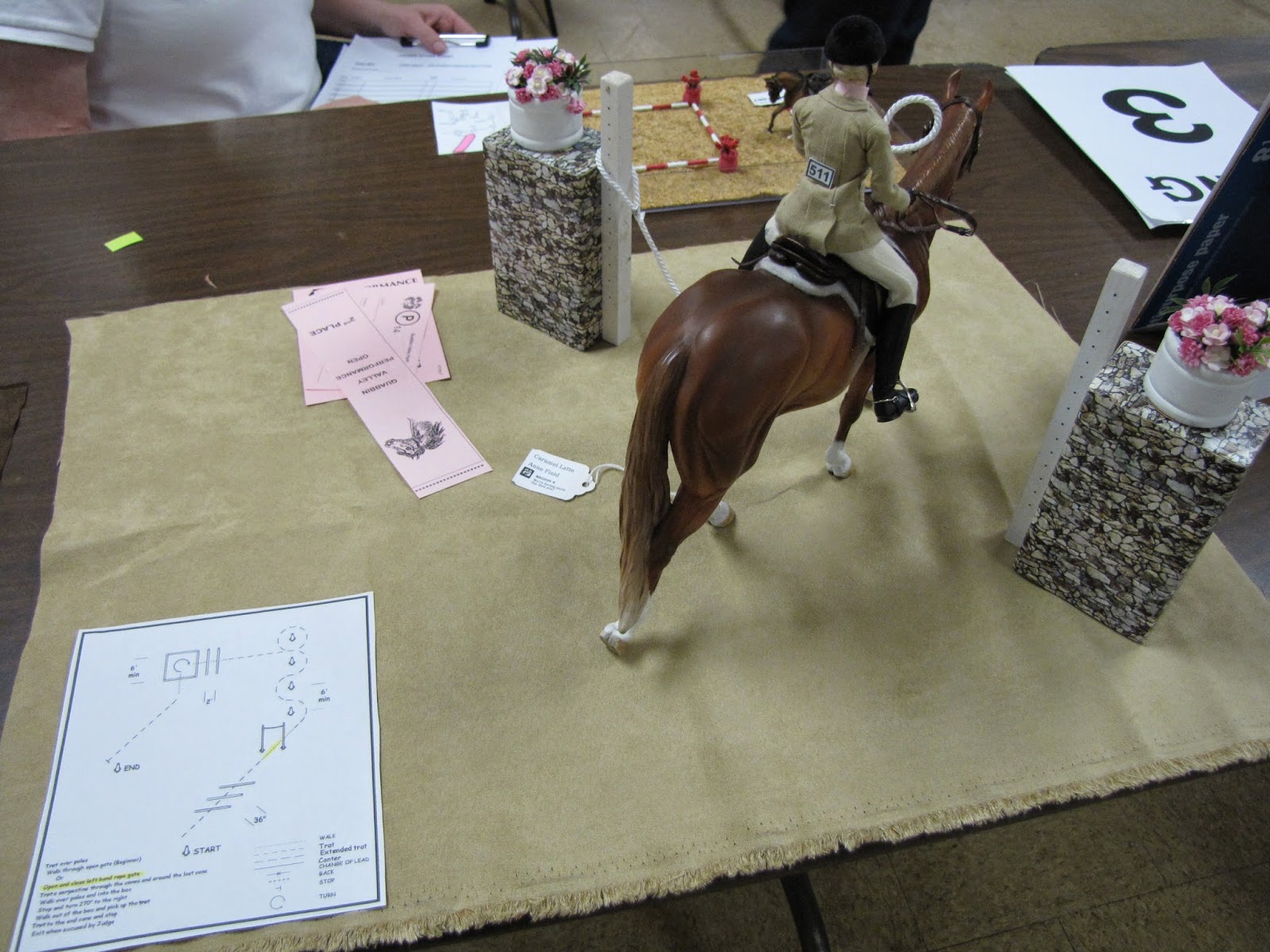 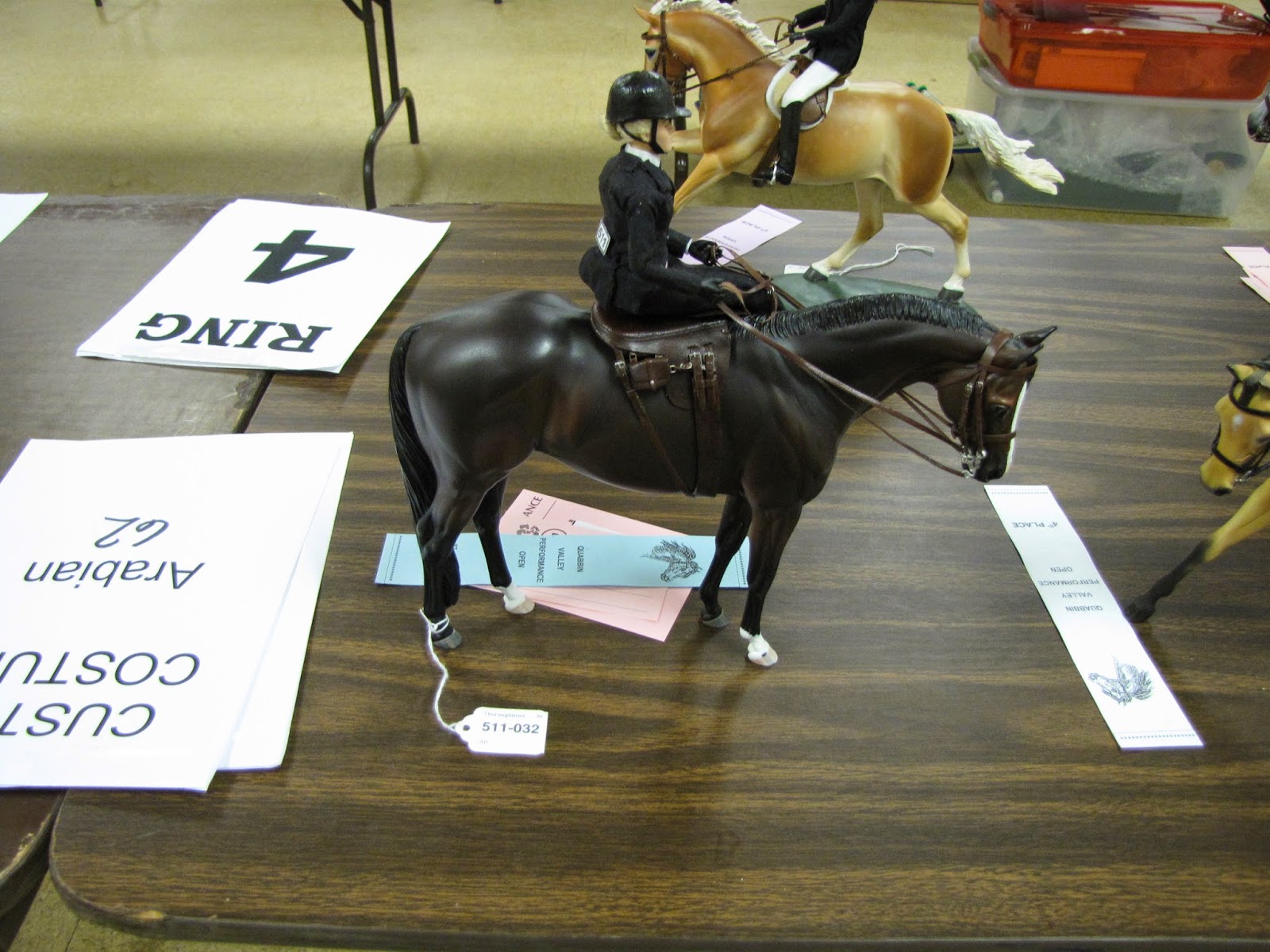 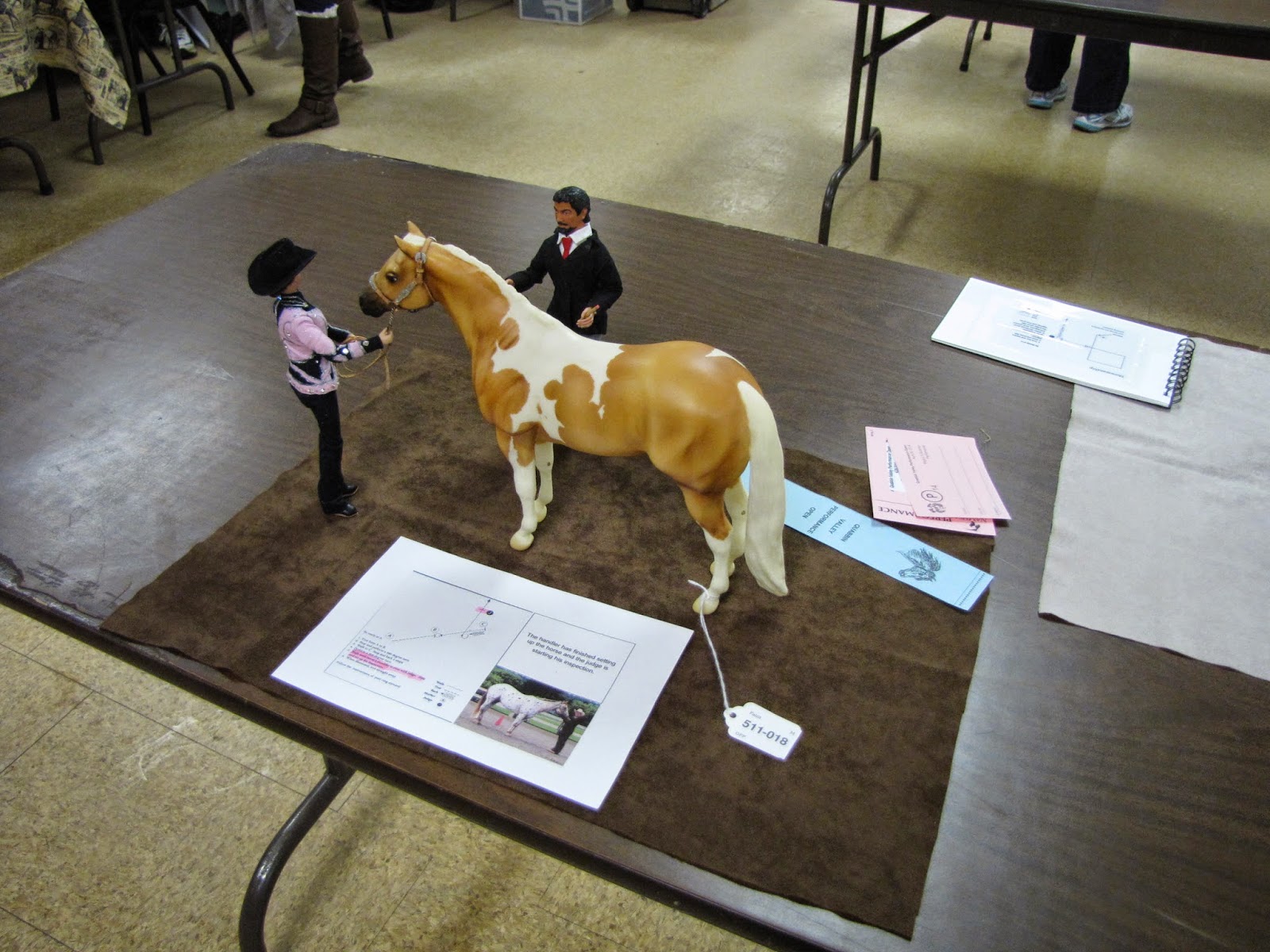 Things got a little hectic about now since we were running out of time in the hall so I jumped back to CM to show Hurricane Deck in Indian costume... 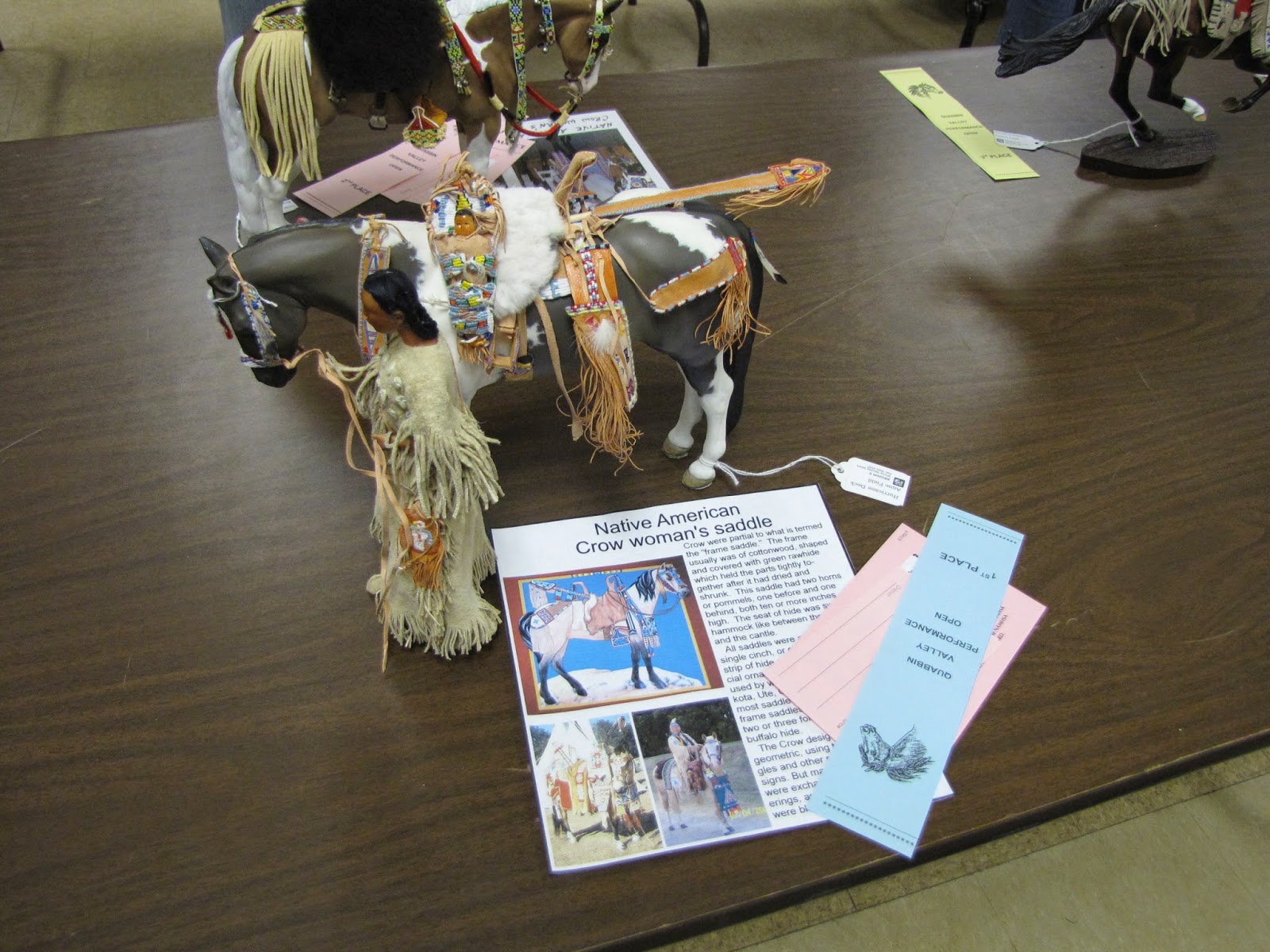 Then back to OF to bring Lady Liberty over to scene... 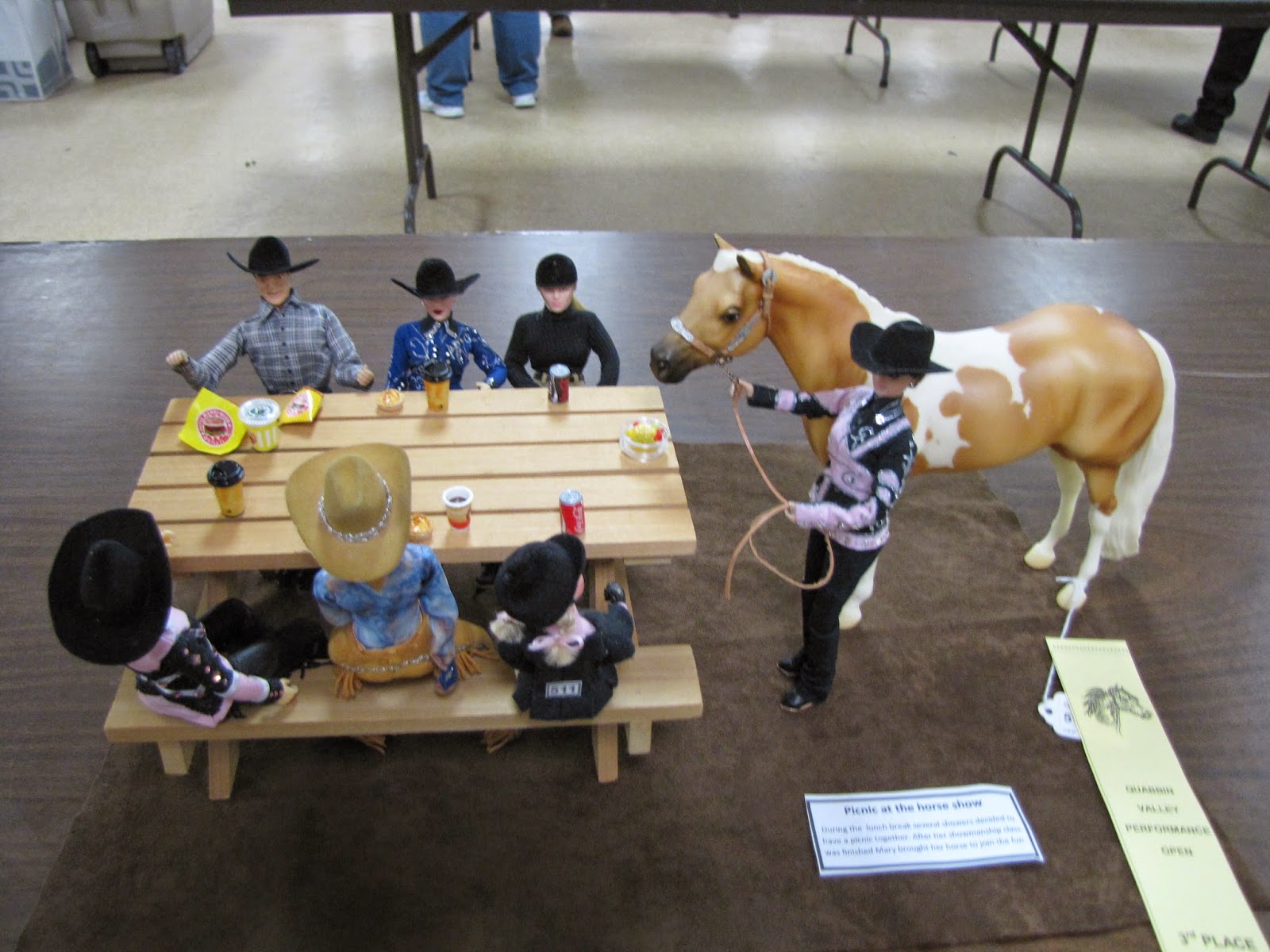 And back to CM for call-backs (I skipped a class as well). Hurricane Deck continuing his very good day got champ in the costume division. He also got reserve champ in Four Square which was an extra championship. You had to submit the classes you wanted to count for points towards the award at the beginning of the show. 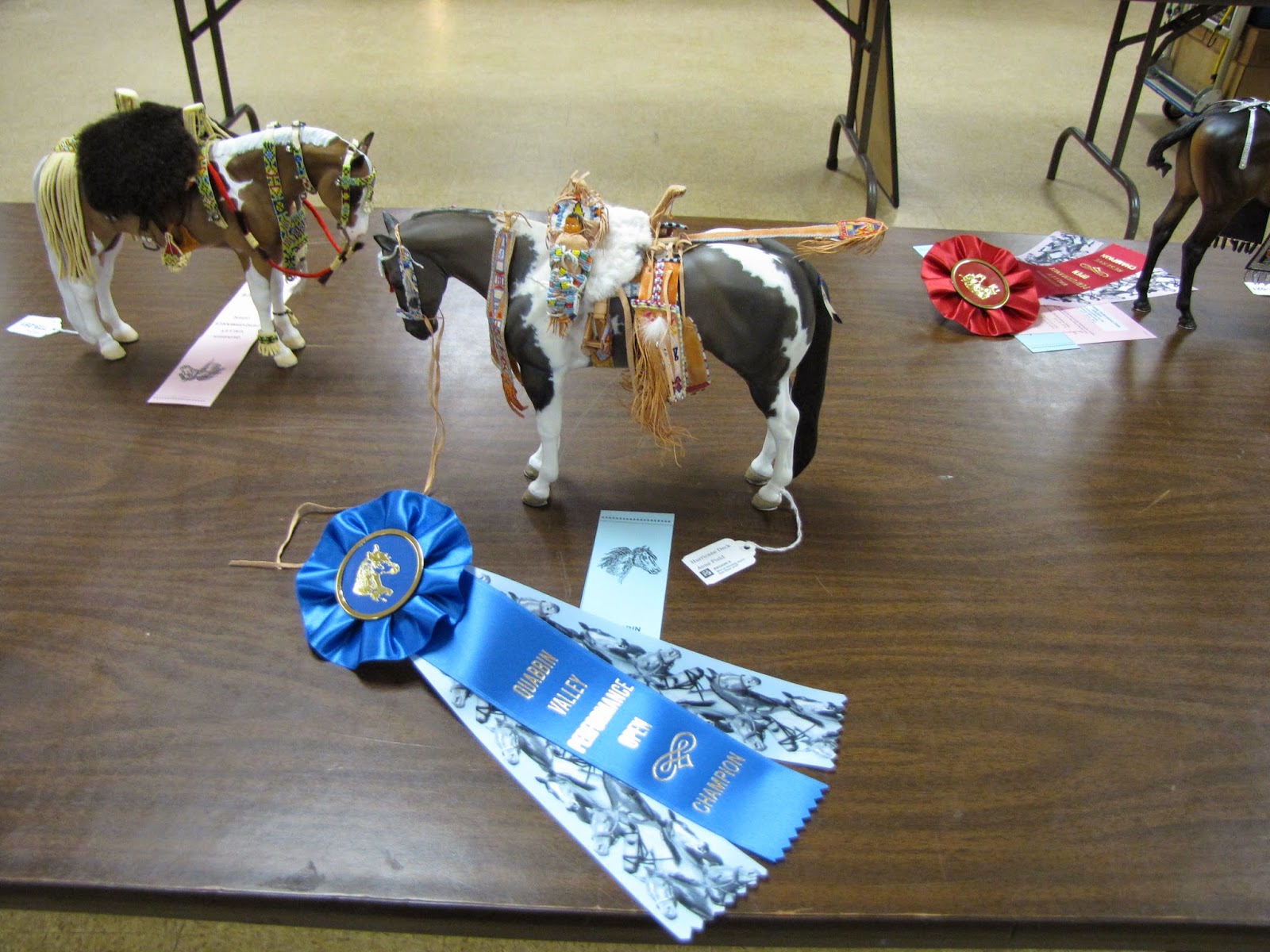 After that I jumped back to OF where Lady Liberty managed champ in OF other performance. 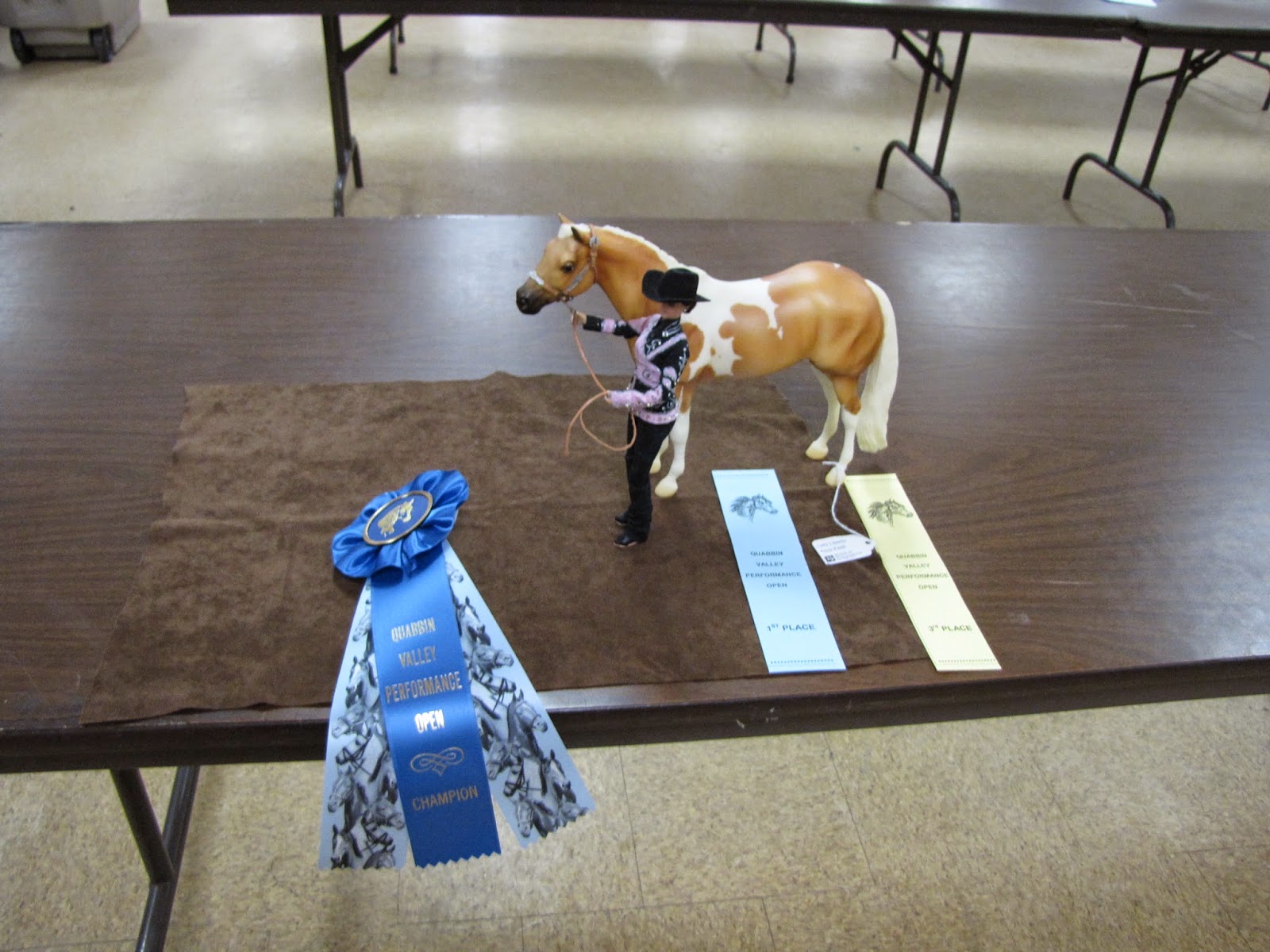 Overall the day went well. I skipped classes when things got too crazy and had a really nice show day. I should skip classes more often.
Posted by Field of Dolls Studio at 5:23 AM 1 comment: