I realize I have not posted to this blog in a very long time. Some of that is because I didn't have much to talk about, didn't have any fun pictures and was just sort of busy. Another reason is yahoo locked me out for 3 months so I had to get a new email address, try to find customers and hobby contacts without any way of getting their information, etc. It was all very frustrating. The other issue I had was when I got my new gmail email address I was paranoid and didn't want to connect this account and that account (some of you probably remember my email hacker aka my trip to Spain). So then I had to log out of my email account to log into blogger to read or post and then back again. And because of my increased paranoia I have come up with redicoulously hard passwords that I have to write down to remember because they are just too long/strange to memorize. Or hack I hope. I also discovered that my virus software and Internet Explorer don't play well together. I know none of this matters to anyone and you all just want me to admit the reason I have not been posting is because I was too lazy. OK, I'll admit it, I was too lazy to log out, log in and then think of something to write about. Guilty as charged.
So have I all of a sudden become less lazy? Nope, I just have switched to Google Chrome for most everything I do on line (my virus software seems to like it as well...) and I can come on IE just to post to or read the blog. No one really cares, lol.
I do actually have something to talk about today and photos to share and I thought I would stop being lazy and post to the blog. Last Saturday was the Quabbin Valley Performance Open which was held in Spencer, MA. I was judging the entire CM division so originally I was not going to show at all to keep my sanity. BUT...my horse, Lady Intrigue, is so close to earning her NAMHSA superior event horse award in therapeutic riding that I figured I had to at least show her in that to try for another NAN card. And then since Joan (the hostess) had new rosettes I figured I needed to try for one of those so I had to show Lady Intrigue in the whole English division. OK, that's doable, she has done plenty of that in her show carear. Then I got to thinking about it and decided that didn't sound like a lot of fun. I have been sort of blah about showing recently and I needed a challenge. So I decided I would show Lady in all her classes as therapeutic riding classes! And that made everything much more fun. It could have back-fired because there was no telling if the judge would even count it as a regular entry or not.  But the very first class (games) the team got a blue ribbon. That was a good start to the day. 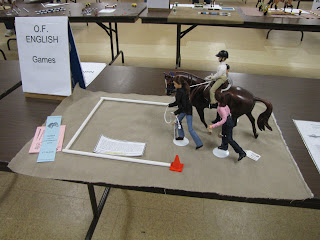 The next class was "other English" which is usually where I put my therapeutic entry. But the entry I normally show is a trail class. So I came up with this new entry to amuse myself. The card explains that the group of volunteers is testing a new horse to see if she will be good for assisted riding. The rider needs to flail the reins, move unexpectedly and sometimes make loud noises. The side walkers need to sometimes bump or touch the horse and they play with toys all around the horse. This was actually something we had to do when I volunteered at the PVTRA and it was pretty crazy. The judge liked it and gave this one second place (and I got another card for my SEH award)! 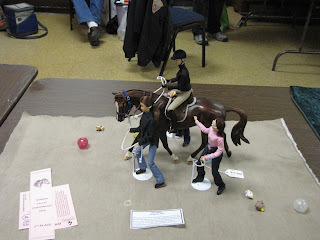 Next was natural trail. I recently (that day) sold my cool trail diorama but I still have this roll-up one I made. Now the trail mat in itself was a neat idea. I have the gravel, grass and other assorted bits of footing glued onto a dark brown piece of ultra suede. The result is I have a wonderful natural trail mat that can be rolled up and put in my props box. The downside is it's always a little bit wrinkled and some of the footing always falls off.
Anyway, I found a real therapeutic riding center that has a cool sensory trail (most of them have sensory trails...) and they have different types of footing and a bridge so the riders can listen to the different sounds the horse's hooves make. I thought that was fun and didn't require that I bring or make extra props (I was going for super minimal) so that was the way to go. This entry also got second place. 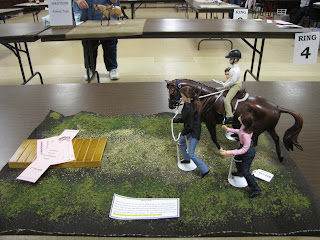 My arena trail entry is boring and I was amazed it did as well as it did. The diagram on my documentation was the actual trail diagram used at the last show my son rode in.The photos are all of Travis as well. But the pattern clearly shows that the rider only trots down the rail and not around or over any obstacles. So I couldn't have my trotting horse even going around the cones. We still managed third. Probably because dolls are cool... 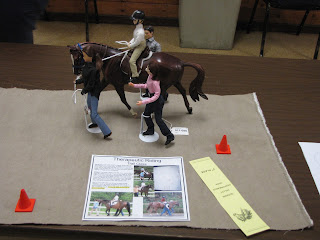 My last entry was English pleasure and I figured it would be pushing my luck to try to show that as an assisted riding entry (though it totally happens at real shows). So I took off the halter, unlooped the reins from around lady's neck and plopped on a regular hunt seat rider. This entry also got second place. 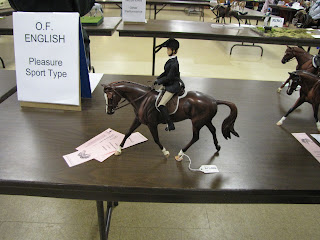 So with all that fine showing Lady Intrigue managed Champion in the OF English division. I got a new rosette and lady got some more NAN cards for her collection. Unfortuneatly I can only use ONE of her cards for her SEH award in therapeutic riding. Even though she was displaying a therapeutic riding entry in each class only the "other English" card counts towards her award as that is what the rest of her cards are from (though some are other performance...). So now poor lady needs to stay in the show ring to get one last card. Poor girl needs to retire. She has jumped off of many many show tables and is getting a bit beat-up. The penny under her hoof is standard show equipment to keep her from tipping over. But she is a fantastic show horse and I am sure she has it in her to earn one more card in therapeutic riding. 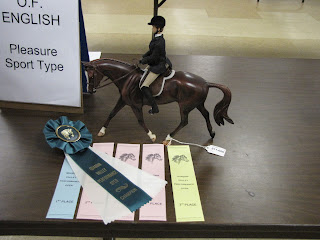 Posted by Field of Dolls Studio at 9:44 AM No comments: