I was accused today of never posting to my blog. I admit that it is at least partially true. I don't post often. I don't know what to say, I don't want to bore everyone and I like pictures but don't take them obsessively. But today I will do a quick post just because it seems like the right thing to do. And I do have some pictures just to make it more fun.
Today was the day of my annual live show. This is the third year I have hosted Baystate Halter Live and I still love it. I think it was a bit (just a bit) nuts to plan a show of this size that would fall only 7 weeks before my wedding but it turned out well. We did have a snafu with the rosettes. Somehow we were short a bunch of top 5 and top 10 rosettes. But we did have more than enough champ and reserve champ rosettes so a bunch of people got those instead. No one seemed to mind getting some extra long, fancy rosettes. Though next year I will check and check numbers to make sure we have what we need. I will probably always wonder what happened.
So anyway, here is a photo from the first year of Baystate. 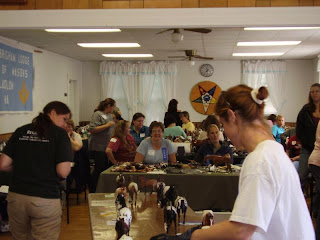 I had a good sized hall booked but the canceled on me at the last minute. That was when I learned the value of a good solid contract. The hall we ended up with was pretty small, sort of cramped and not the best layout, but it was something I could get through a friend connection at the last minute. It did work though it was not ideal. People did say that being that close together did help them get to know people they had never really talked to before. I think people prefer a bit more space though.
So my first big goal for the second year of Baystate was to get a BIG hall with GREAT lighting. I also wanted it to be in Ludlow, MA because that is where I live and since I was hosting the show I wanted it to be in my town. I wanted to be close to the hall. That was my first big goal. So I started looking around and then Ethan said I should try the Elk's lodge. They have a big cruise night (bike and car show) every Tuesday night in the summer so he was there all the time and knows several people that have been lodge members forever. So since I could not find a big enough hall or someone to answer the phone at the big halls I knew I called the Elk's. When I saw the hall I was in love. I decided I NEEDED to have my show there. I can't find the original pictures I took ( I can do a pretty good floor plan with a few photos of a room with some size reference in them) but even without all the lights of I could tell it was really good and the hall was HUGE. And since that was my first big goal I loved the hall. I got a contract right away for my chosen show date because I had learned my lesson the last time.
Last year was the second year of the show and the first year in the new big hall. I think we had about 42 entrants and TONS of room. Here is a shot from Almost the end of the room. There is also lots of room on the sides for the entrants tables. It is such a big hall :) 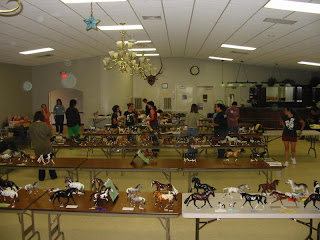 And here is a photo from this year's show. A couple of judges hard at work and some people checking out horses. It is also nice to have a good camera to take nice pictures. Last year, even with the good lighting, my pictures were not super. But my camera was old and tired. 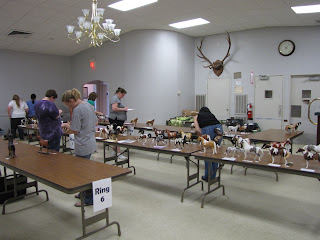 This one is a photo (a bad one, lol, I was not close enough) of the rosette table. 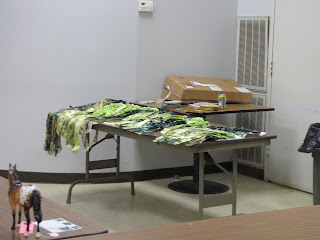 This was not ALL of rosettes, some of them had already been given out when I took the pictures but it was still a pretty good stack. I do still sort of have a dream of having a performance show as well as the live show. The hall is certainly large enough for that but either I would have to have the performance show in the Spring and then my halter show in the summer or make the whole thing a 2 day show. I still need to think on that some more because the hall rental alone would be very pricey. But I think it would be fun. And I don't imagine it would be so much more work to plan a 2-day show instead of just a 1-day show but I know it would be more work. So I will think some more on that. I do eventually want to have Baystate Performance Challenge. I already have rosette colors picked out and everything. I just need to see if I can handle it, run some numbers to see if it is even going to work out and then get as many volunteers as I can. I would love to do it. Maybe if I offer judges free entry for the performance show if the judge a couple of small sections OR a small payment if they don't want to show. Hmm, that's a thought. I think I will go post to the regional board and get some opinions. Then to bed and tomorrow I must continue with wedding stuff.
Posted by Field of Dolls Studio at 6:28 PM