When I decided I was going to make more of an effort with the blog I figured I would do some posts on live show classes. Anything that uses dolls is a good excuse and we can pretend to be on track. My first idea was of coarse therapeutic riding. That is a real horse area that I am very knowledgeable about because my son is in therapeutic riding and I volunteer with the program as well. The other real horse class I am fairly well versed in is Western showmanship. Liesl Dalpe, who is known for her precise set-ups (especially showmanship) and also had a lot of real horse experience with showmanship and she taught me what to do. I still think that a model that is standing square is the easiest horse to use in a showmanship set-up but if you think about it it may be the hardest. Your horse has to be perfect to the pattern and your handler doll and judge need to be in the proper place as well. I did post back in January about Western showmanship and it is an interesting entry. If anyone is interested here is a link to the post http://fieldofdolls.blogspot.com/2009/01/western-showmanship.html that was written before I had any judging experience and I was pretty nervous. Now I have judged at several shows (not always performance) and am much more comfortable judging. I am even thinking of taking several shows off from showing next year and just judging. I do have a great time judging and it is easier to work without wondering if you are missing a class in another division.

Western showmanship is not a hard class to set up for live showing but it can be easily messed up. I have messed up several times on things myself. But with good attention to detail you can do a great job. The equipment you need is very simple. You just need a horse with a halter and a handler doll. Some people may say that the doll is optional but you can probably only get away with that in photo showing and it still doesn't work all that well then. Today we will be discussing the judges inspection portion of the class. This is the pattern I have been using recently for my set-up.

I usually have step 5 highlighted (It says walk until horse's shoulder is even with judge. Stop and set up for inspection). I also have a note on my documentation that says the horse is finished being set up and the judge is just starting his inspection.

The halter the horse wears is very important as it is the only piece of equipment used in showmanship. Ideally the halter for Western showmanship should be a fancy show halter. Any halter can be used as long as it fits well but the nicer your set-up the better it may do. The lead and how it is attached is very important. The snap should be attached to the left side of the halter up near the throat latch. Like this 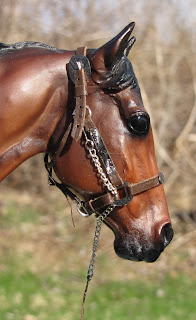 Then it goes from the outside, through the left cheek piece, under the chin and out the right side cheek piece. The chain on a real showmanship halter should only be about 4-6 inches long. The extra chain on this halter is too long to be correct. On a model halter it should be only about a half inch long. The handler should hold the chain right at the end of the chain but on the leather of the lead. If your chain is too short or too long the handler will not be holding the horse in the correct way. 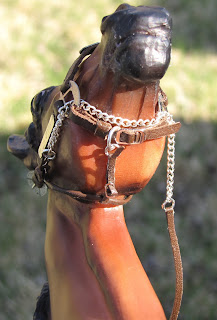 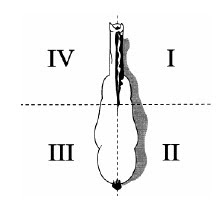 This last photo was my showmanship set-up at region X regionals this year. I got OF Champion for the second year in a row and I'm very happy about that. Maybe next year I will change things up a bit. Or perhaps I will also try CM showmanship and see how I do in that. 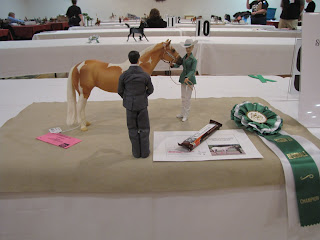 THANK YOU for this article--I was recently trying to find something on showmanship anywhere and could not find something so clear and concise even for real horses (probably because real horses need training for this thing!) I've often though of showmanship as similar to dressage for models--easy to set up, fairly minimal equipment but very nuanced and easy to mess up!

Do you mean the doll holds the chain at the chin but on the leather?

I need to invest in a showmanship doll, but I also need my new tack to be finished first! Soon soon soon!

*to clarify where the lead should be held*

In real showmanship you would put your thumb on the end of the leather part of the lead right next to the chain but not touching it. I found this photo of a foal showmanship class to show how the lead should be held http://special.equisearch.com/blog/bringingupbaby/uploaded_images/Futurity.2-747640.jpg it is not my photo but it does deomonstrate where the lead should be held. For an adult horse the chain would be too long (I don't know foal rules).

In real showmanship the chain is used while setting up the horse to tell it which leg to move. If you pull up and to the right it is one leg, up to the left a different leg (I don't know which legs though, I am not THAT good, lol) and so on. If your control is too long it is too obvious what you are doing and it takes too long. If you take too long to set up your horse you have already lost the class. In the model world we have it a bit easier :)

Hey, I know this is an old post, but are colorful leather showmanship halters allowed? I know there really aren't that many rules on the halters besides the fit, neatness, etc, but I haven't been able to find a single halter that's not the usual black/brown. I've seen different colored crystals, metal plates, beads, etc, but I've never seen one where they actual leather was a different color.

I am not the final word in showmanship by any stretch of the imagination. BUT, I have never seen a colorful halter used for showmanship. The traditional show halters are leather, in a natural color (natural, brown, black) and usually have silver on them. Added crystals are fairly new (as far as I know) since everyone is jumping on the crystals craze. I don't know that there are rules against colorful halters but I think it's just not done.

Alright, thanks! I just got some new leather and I made a purple show halter with silver plates and all of that with just a few crystals, so I'll take it to a show with me in the Spring and see how it does. I'm hoping that it will do okay because the purple is rather dark, so it's kind of a plum and it's not to bright/crazy. We'll see. Thanks again, that did help!