This past weekend was the third annual Quabbin Valley Performance Open. There were not a lot of showers out this time but the hard-core performance junkies were there so competition was fierce. Since there weren't tons of us I figured I would be able to handle taking photos of every entry throughout the day (to make the people that didn't come jealous, lol) and I managed to get most everything. I did miss a few classes all together because I zoned or was frantically changing costumes but for anyone that wants almost 200 performance photos to drool over here is a link . Enjoy the show. Now I did actually do some showing that day so here is my show report. I'm starting with OF performance because it was smaller for me (I only brought 1 horse that did more than one class). The first class of the day for me was OF English games. This is Lady Liberty, an OF Breyer Lady Phase, wearing a tack set from Four Corners Tack, a saddle pad by me and a doll by Joan Yount. This set-up was good for 1st place. 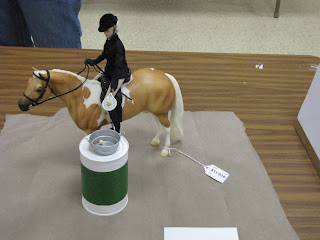 The next class was Other English Performance and Lady Intrigued entered just this one class for the day. The saddle and bridle were made by Jennifer Buxton, and I made the halter and all the dolls plus the props (except the cones which are from the Breyer trail set). The little rider doll is my son Travis. Or at least he is close enough that he looks like my reference photos and when I ask Travis who the doll is he says "Travis". This set-up earned 1st place as well. I am now 3 NAN cards from a NAMHSA superior event horse award with my therapeutic riding set-up. I have worked for this one since I started showing performance (almost there!) Lady Intrigue is semi-retired and this season has only come to shows to do therapeutic riding. 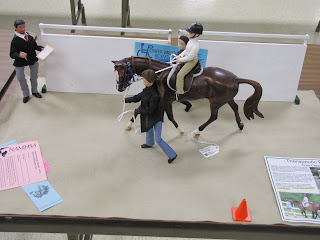 My next entry was OF English Natural trail. Joan Yount also made this doll and I made the roll-up trail footing. If I could find a way to make it unroll a bit nicer it might do better. But the entry was worth 5th place. 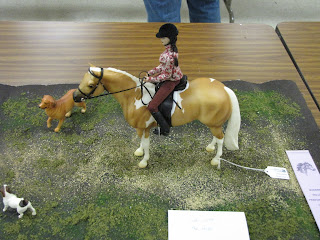 After that we moved onto arena trail. Lady Liberty did this really cool bridge entry where the rider is supposed to stop and show the mail. The judge gave this one 1st place as well. 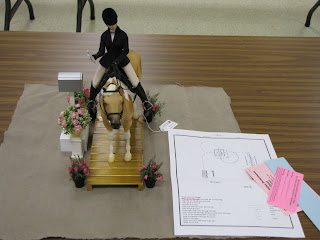 Next up was OF Hunt seat pleasure. I don't think I paid nearly enough attention to detail or the doll (bad Anne!) because this one only brought in 4th place. 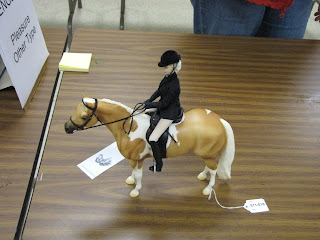 Next up was the OF costume division. Skippa Latte came to the show to do the costume section because she was working on a performance versatility award and only need one more card in the "other performance" section. Well she got it with this Native American costume entry. I am not sure who made the costume but it is lovely, detailed, and so in-scale. The doll head was sculpted by Joan Yount and I made her dress. I will be remaking her dress as soon as I get some thinner leather. I got 1st place for this one. 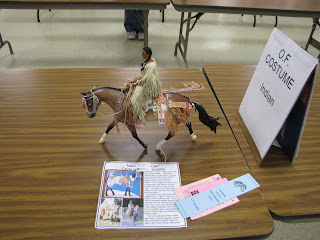 Next was parade but I seem to have missed getting a photo of that one (oh, really bad Anne!) Skippa Latte again wore the cheetah print parade set I created with the matching cheetah print doll also by me. That was worth 1st place as well.
The next class was OF other costume. I made this Harry Potter costume and even though it was made on a horse that didn't have a lifted tail the judge liked it well enough to give it 2nd place. 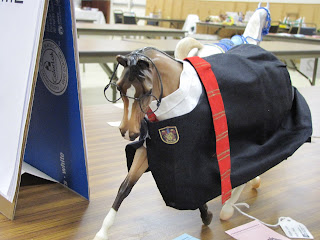 Which was enough to get Skippa Latte the champion rosette for OF costume. 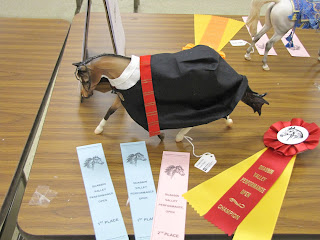 Next for me was the OF western division. We started it off with this natural trail entry. Lady Liberty is wearing a saddle set by Pam Perkins, a pad by Elise Partanen and the doll is by me. I am not sure if my doll falling over caused the problem or if everything else on the table was just cooler (though I have photos and could check...) but this one only brought in 4th place. 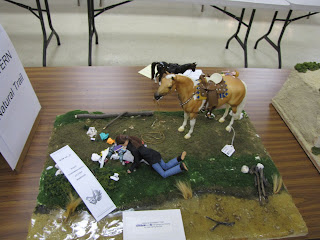 After that was arena trail. I switched out the doll for the "me" doll that Joan Yount made me for Christmas (it does look a lot like me!). The ground poles were done my Marci Driscoll and I made the flowers. We got 3rd place for this one. 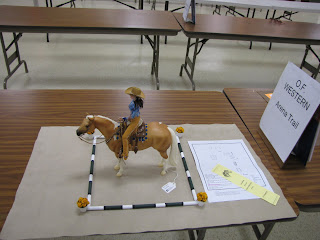 Next came western games and we got 2nd with this water relay entry. It is not a hard set-up so it is hit or miss with the judges. I guess it was a good day for the water relay. 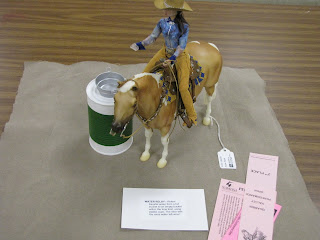 Next up was the OF other western class. Lady Liberty tried a western riding entry which earned her another 3rd place. I missed the photo of western pleasure-stock type but she also earned a 3rd in that one. 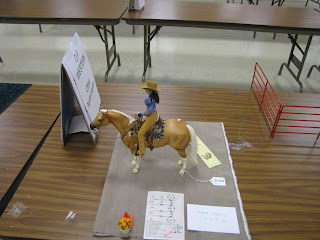 And that was still enough to get her OF western reserve champion. 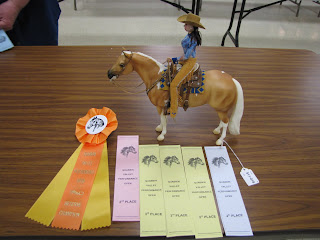 Soon I will do my post on the custom division. I have been very busy with doll making (though I seem to show a lot of dolls that I didn't make, lol) so I have not had time to fight with the photo uploader. CM coming soon though!
Posted by Field of Dolls Studio at 5:30 PM

Hi Anne, So glad my tack set helped you to a few wins! Lovely to see the pics and I'll look through the rest tonight. Thanks so much for sharing.

There were even more wins with the tack set you made in the CM performance section. I just posted that report as well :)