In my last post I had a head-to-head competition between the new Zica humanoid 8.0 (Yvonne) and the Brenda Breyer doll. Both were completely unmodified and naked so they could not cheat or hide any of their abilities (or lack of). I was so impressed with how Yvonne did naked I wanted to get her dressed as soon as possible to finish testing if she would make a good rider doll. So I chose the most unforgiving riding outfit I could think of; super fitted chaps and a fitted, non-stretchy western shirt. I did some very slight modifications so she would sit deep in the saddle and repainted her face and rehaired her head (neither of those effecting the way she rides of course). The Brenda dolls in this competition have all had heavy modifications including; taping the waists (so they are not floppy), padding the waist (so they don't look like they have on corsets), padded their rear ends (so they can sit up in the saddle instead of falling over or hovering) bendy necks added (so they can look somewhere other than straight ahead or straight to the side), arm joints tightened and so one. To modify the Brenda to get her ready for dressing as a rider doll can take anywhere from 1-2 hours depending on if anything fell off in shipping (I have had legs fall off as soon as they come out of the box) and how hard getting everything to stay where it is supposed to stay turns out to be. 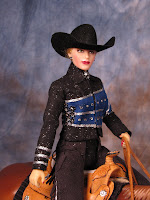 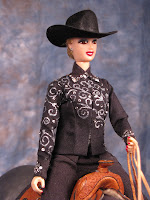 This first comparison is a 3/4 front view. Yvonne has a very realistic face where Brenda looks like a doll. Both have a decent shape and seem to ride nicely. 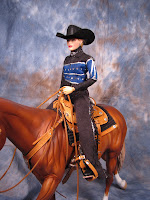 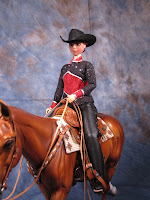 This second view is also a 3/4 front view but a full body shot. Yvonne looks very comfortable in the saddle and still looks very realistic. This Brenda has a new sculpted head which is decent but not nearly as nice as the Yvonne head sculpt. Both dolls seem to be able to ride well. 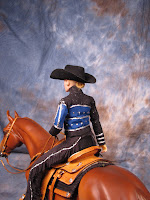 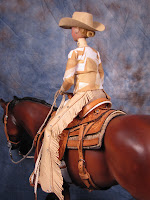 Next we have a 3/4 full body back view. Brenda looks like her leg is a bit stiff but that could just be that it wasn't adjusted properly. Brenda looks very natural to me and quite realistic. Both dolls are sitting in the saddle nicely. 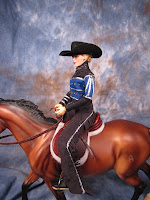 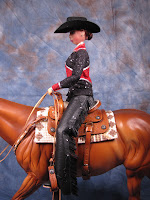 Next up is a full on side view. Yvonne chose to sit in English tack because some people have been asking to see her in tack and I said I would get photos of her in both western and English. She seems to sit very comfortably in an English saddle, even in her chaps! Brenda looks fine and she does hold the reins nicely. 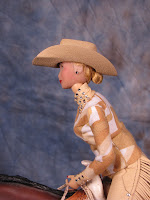 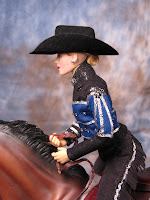 Next is the gaming position. It would also be an over fences position if the horse was jumping. Both Brenda and Yvonne do this very well. They are leaning forward and looking up at what they are heading for. Brenda can't do this without her custom bendy neck though Yvonne can do this straight out of the package. 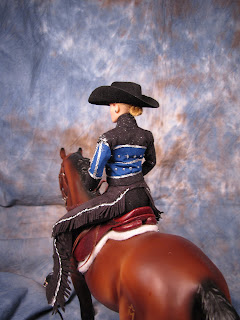 I've only played with the one Yvonne doll so far but I am a fan. She takes very little modification to make her an excellent rider doll, she has a super realistic face sculpt that I am very excited about, she is shaped like a real person and fairly easy to use. I imagine if I used any sticky wax at all on her hands (I didn't for this shoot) that she would be very simple to use. Her arms do stick out a tiny bit when she is dressed in a fitted top but I think I have a modification that will solve that problem as well. Brenda Breyer can be a very nice rider doll but she does take quite a lot of modification. Yvonne takes very little extra work to make an exceptional rider. Both dolls do have merit as a rider but I am loving the new Yvonne and am looking forward to making many many more of them into custom riders. Yvonne is more expensive to purchase than the Breyer dolls but she saves me so much time not having to do a total body rebuild (and I don't have to sculpt a head!) that I will be offering them for custom order for a very minimal extra cost. Happy showing!
Posted by Field of Dolls Studio at 5:07 AM

I'm sold!!! I want her as an english rider I can't wait to see her in english Clothes!!