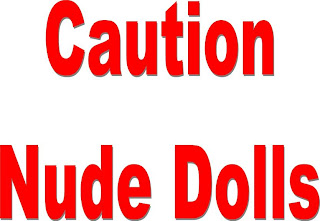 I realize that some people have an issue with nudity even if it is just in a toy human (*ask* a doll). So the cautionary message above will show up instead of a nude doll photo if you are a subscriber.
Welcome to the first ever (that I am aware of) head-to-head competition between the Breyer female rider dolls and the new Zica humanoid doll Yvonne. We'll call the Breyer doll Brenda (as that was her name for awhile) just so we can talk about them.
Here Brenda and Yvonne are meeting for the first time. It's always nice to start with a handshake. 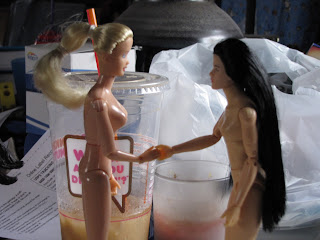 For the first round I am just comparing the height and the overall look of each doll. Yvonne is wearing the smallest size breasts that she comes with (she comes with 3 sizes) and the hands that are the most appropriate to ride (until I get out the heat gun and mess with another set...). Yvonne seems a little bit shorter than Brenda which will make a lot of hobbyists quite happy since Brenda is often out of scale depending on which horse she is riding.Yvonne looks to have a more human looking waist and thighs that seem to be a bit shorter. Maybe they won't need to be shortened to fit the saddles... 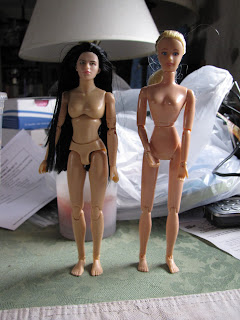 For the second round We are seeing who can bend their head down further. Good for saluting in dressage, games and probably a whole bunch else. Brenda isn't very good at this. 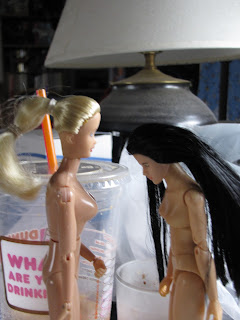 Round three is tilting the head back. Great for speed games and over fences. Probably Arab showmanship as well. Brenda doesn't seem to be good at this either. Yvonne is doing an OK job but could do it a bit better to be perfect I think. 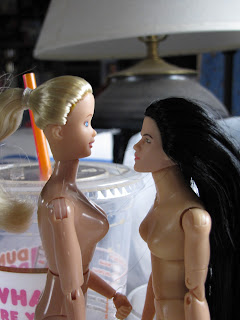 Round 4 is the bendy test. Brenda is trying hard but that is as far down as she can go. Again, breathing is not allowed because she will fall over. Yvonne seems to be exceptionally good at this challenge. Even with her arms flipped over backwards! (I noticed that after the photo shoot). Yvonne's knees and elbows do something weird in this extreme bend but it does allow her to get down further. Brenda still has normal looking (sort of) knees and elbows. I would say it's a tie but I like that Yvonne can bend so much without being rebuilt. 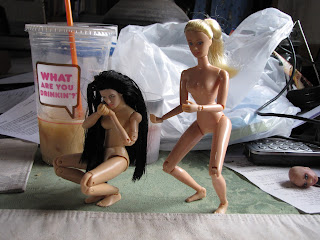 Well now Yvonne is just showing off! Brenda has no chance at this one. 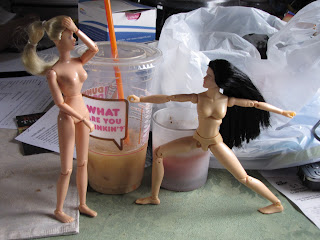 Round 5 is sitting a horse. Brenda does that pretty well but she has to "hold on" or she will slide right off. She can do it though... 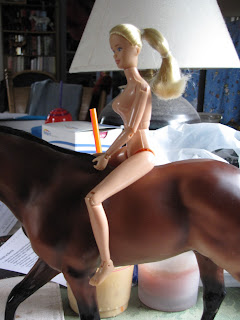 ...I think Yvonne does it better. She doesn't need to "hold on" with her hands and can stay seated very easily on her horse. I imagine I could change her leg position as much as needed as well. Also take note, her knees look normal (I can can even switch it so her knee is on the lower pivot point and her thigh is shorter. It's pretty cool!) 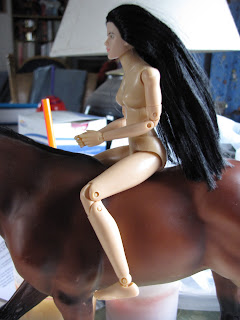 Hmm, I think she is showing off again 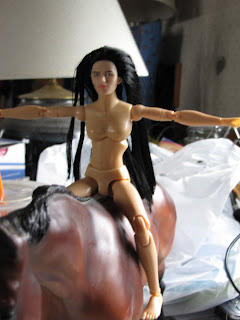 Brenda is a nice enough doll that can ride and with some body modifications she can sit nicely, look human and contribute to a win in the show ring. But that does take a lot of body work to get her there. The above Brenda has one of the nice, smaller factory heads (I really will miss them when I run out) but I think Yvonne's head and her features are more in scale with a real person. Yvonne looks cranky but I might be able to make her look more happy, or just serious, with a bit of a repaint. All in all I am incredibly impressed with the new Zica humanoid female doll. They can be ordered here. I will have to test one out dressed before I can give my opinion of a final verdict on the usefulness as a hobby doll but so far I like her a lot!
Posted by Field of Dolls Studio at 1:31 PM

I'm very happy with her. I plan on buying them and sending to my doll makers... Here she is dressed. Stirrups too long of course. http://www.flickr.com/photos/woodturner52/8691121470/in/photostream

Wow Vicky she looks great! I'm going to get mine dressed in a very unforgiving outfit to make sure she can still hold her poses. I have high hopes for her.

Great post!! I'm at work and had a hard job not bursting out laughing! Seriously though this new doll looks great, looks like she'll be so much easier to position and USE! I wonder if they will produce a man and a kiddy or two to go with her....

I laughed out loud at that photo of Yvonne doing the yoga pose. She looks like she has potential!

If you click on the photo on the ZICA website to enlarge her photo she kind of has some abbs on her... kinda (and a belly button!)

Jenn, I am ordering more and will be offering them for an option on custom orders. And I need bridles...just saying :)

LOL! THREE sizes of breasts and those are the smallest??! HAHA!

Well she was made to be a superhero. Big boobs help fight crime, don't they?

Eeee, I'm so glad she's worked out so well! I'm really tempted to order one for myself now even though I don't really do anything with my trads anymore...

Just put in my first order

Hi, I got the impression that you know a thing or two about Breyer dolls and I was wondering that can the 6¨ dols head be pulled of if i want to add hair to a damaged doll? And does the head go back on?

Sorry about the weird question :)

Hope you can help! Thanks!