I've done it. Finally. It only took two and a half years from this post, but I did it. Lady Liberty Finally earned her superior event horse award in showmanship! It arrived Friday but I haven't had a chance to share until now. 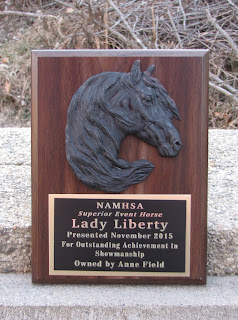 After Therapeutic riding, Showmanship was the class that always meant the most to me. It was the class that I "knew" from real life. The very first time I showed in the Showmanship class My friend Corrie McDermott talked me into it and basically set it up for me. She said Liesl Dalpe had originally taught her how to do it correctly. Here's my very first showmanship entry. (and as an aside, this is the first photo I have ever scanned in my life!)

This was from the Northeast Model Horse Expo held April 5, 2008. Pretty much right away I was hooked on showmanship. The first time I needed to judge Showmanship was at the very first Quabbin Valley Performance Open on May 16, 2009. I told Joan I didn't know enough about showmanship to judge it correctly. When I mentioned my concerns about judging the class to Liesl she showed me a live demonstration with her real showmanship horse. All of a sudden a class that I only knew how to do one way I really understood. What looks like a deceptively simple class is in reality very precise and easy to mess up.Like this entry. 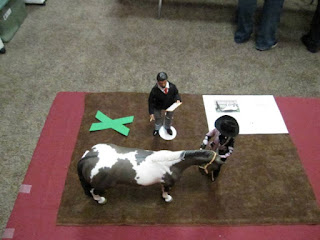 This was from TRXC in 2013. After doing this class for 5 and a half years you'd think I would think when setting it up. But I put the judge and the handler in the same quarter which is a huge no-no. Sadly this photo lives in Brenda Bendnar's album on Facebook with a very lengthy discussion attached to it. And so much shame (mine). 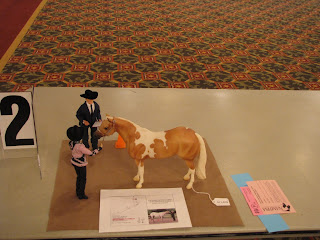 I did well in showmanship for a long time and then I started to slip. Or Lady Liberty got old and maybe a bit beat up. A performance horse sometimes has a hard life. 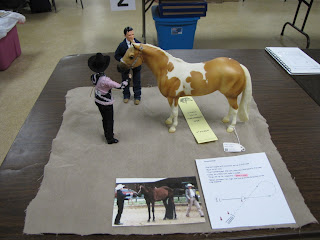 I started getting third in showmanship and I couldn't seem to get that last NAN card I needed. It was a frustrating and familiar pattern. The same thing happened with my therapeutic riding entry. So I revamped everything. New, super detailed documentation, new perfectly fitted custom halter and a brand new showmanship doll. And it worked. 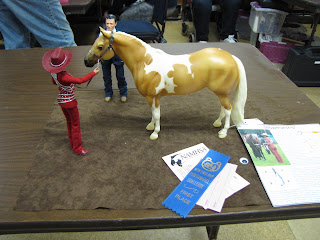 Lady Liberty received the last NAN card she needed for her Superior Event Horse Award at NEPC on October 17, 2015. I nearly cried when I saw that blue ribbon. Not gonna lie about that. I also filled out the paperwork for her award the very next day.
Lady Liberty earned her quiet retirement but I wanted to give her one more shot at showing. So I put her in the open OF showmanship class at TRXC 2015. 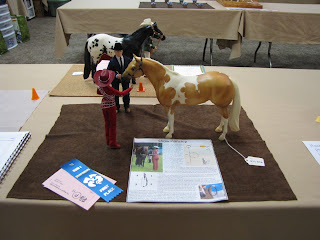 Good times. THAT is a good way to retire! She also got a top 5 to round out her show day and her showmanship career. 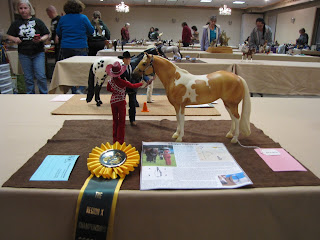 Lady Liberty did show in other things besides showmanship but the last few years she has done showmanship almost exclusively. But it was fun working towards the award. I guess my next goal will have to be big as well. I was thinking Caramel Latte would work towards her Performance Versatility award but she managed that two shows ago and it seemed far too easy. So her new goal is a Performance Legacy award. She only needs like 9 more cards for that one. When she gets it there can be a nice variety of classes in the photos!

Thank you so much!

Congrats to your mare! And your work!

I knew TRXC was a big deal, but this makes it so much more personal! Congratulations on sticking to a goal for so long. I can't help but suggest (in a whisper)... 'harness'... one of my own favorites...!

Congratulations! I, too, have a special horse I am campaigning to his PVA. He's two cards away from the end goal. I just finished his harness set up in December. And now his Native American set is almost done.

Congrats to you and Lady Liberty!!!