The Evolution of Field of Dolls Studio

Sometimes it's fun to look back at the beginning and see how far you have come. This particular blog post is very well timed (by chance not by design). The very first blog I posted was last December and it was about my dolls and how far they have come. I have a bunch of photos today so this should be fun.
First I should probably start with the beginning of my "studio" because the title of this post would imply that that is a good idea. I started out under the farm name of Green Acres Farm. Some people think it was a reference to old TV shows but really it was a joke about some of our neighbors. The land we live on is NOT farmland by any stretch of the imagination. It may have been at one time but bad septic tanks and sewer issues have wrecked that possibility. Yet one of our neighbors tried to start a farm in the mess of weeds in the field behind us. I wish I had pictures of how it used to be. It was a fun place to explore for anyone that likes plants and trying to identify plants (like me). But then they bulldozed all of it to farm. So there were jokes about "Green Acres Farm" and when I started holding photo shows I needed a name and Green Acres became the one. *sigh* sometimes I have no imagination.
My email address really gave me the next studio name. My name is Anne and I do crafts of all kinds (which is how I got my super clever email address, lol) so since I didn't like Green Acres I was then Anne's Crafts. I had lots of business cards with that name as well and the old freewebs address.
Then as my dolls started to evolve and improve I really wanted something more professional but fun at the same time. I don't imagine I will ever become one of those serious people. But as I proved to myself with the Green Acres thing I can have very little imagination. And names stick. So I ran a contest and figured I would get input on studio names. This was last year right after region X regionals where I told everyone I saw that "everybody needs dolls" (which is true of coarse) so I got that as a suggestion, Got Dolls? And a whole list of other names as well. Nancy Timm asked what my married name was going to be and when I told her Field she came up with Field of Dolls. And it stuck in my head and no other names sounded as nice so that is how I became Field of Dolls Studio.
Then the fun started. I got a real website, new business cards with my new studio name, my new name, my new web address and so on. And the blogging has been a bit more interesting and slightly more consistent. We'll see what happens next I guess.
Now for a brief photo tour of some of the dolls from the beginning until now. 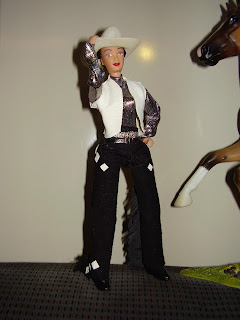 This was one of the original dolls I made. She sold on MH$P for $40. I think besides her colors she is not that impressive. 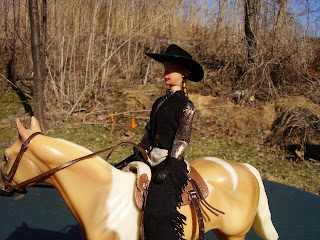 This was one of the first dolls I made as well. I believe she sold on eBay and prompted a similar custom order. 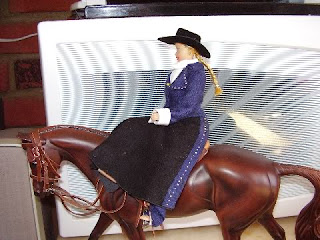 This was the first "convertible" doll I made. She had several articles of removable clothes and could do several different types of classes. She was not super but she was the first, I was very new (she cost very little) and you have to start somewhere. 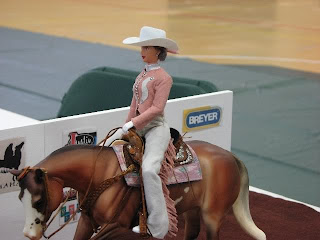 This was the first nice photo I had of any of my dolls. Well this series of photos, this is only one of them. I didn't take them though, Liesl Dalpe took them for me with her camera. My photos have (occasionally) gotten better but I am still not a super photographer. 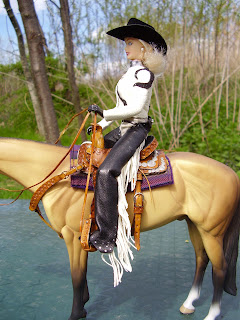 The 2 tone doll was fun and I think she is very eye catching. I may do some more of these in the future but I don't know if they would be popular. I like it anyway. 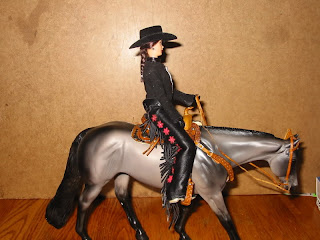 This was the first doll bought by my good friend, Joan Fauteux. Funny enough this doll is also how we became friends. She lives pretty close to me and when she asked if we could get together so she could see if the doll fit her saddle I said sure. So we played dolls, had a great time and formed a friendship. Joan now has 10 or 11 of my dolls and may get a blog of her own one of these days. That could be fun.

This was the first studio photo shoot I got to do. When I have time I go and work with my friend Liesl in her studio. I got to borrow her camera and use her photo backdrop. I think they came out pretty well. 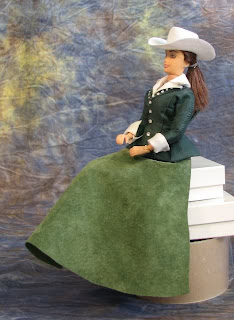 This doll I made because of the blue convertible doll. I wanted to see if I could do the same doll again (well, similar anyway) but do it well. This was also the first doll that I used my sewing machine for. I think it is a marked improvement. 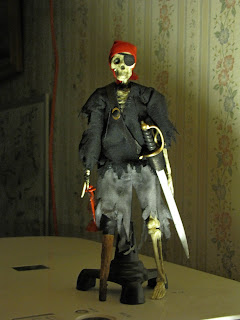 This is the doll I made for Ethan. He has given me 5 tattoos (his art) and I hadn't given him any dolls. So when he said he wanted a skeleton pirate I said I would do it. This guy has since gotten a new sword that is more in scale but this picture was taken quickly as Ethan was pulling into the driveway. 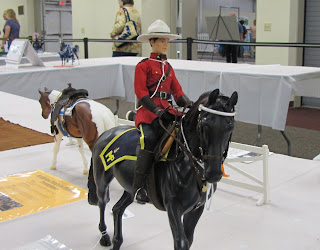 This guy was very fun to make and I was really pleased with how he turned out. He was a custom order for Linda Dean. She made the hat and the tack and I think the overall picture was wonderful. It was taken at Jill (Floyd) O'connor's show, Vermont Live this past April.

Well now I feel like I am rambling again so if anyone has any ideas for future blogs let me know. I still have to do one about fitted English boots but I need to have photos for that. It's coming I promise :)

Posted by Field of Dolls Studio at 6:23 AM