The importance of good notes and actually using them

I received a custom order for an endurance rider. I even got some good reference photos, a nice description, everything I needed to make the doll exactly how the customer wanted it to be. And yet except for the colors I made the doll almost completely wrong. How did I make such a mistake you ask? I didn't actually look at my notes.
The project started out simply enough and then I got delayed from life things happening around here. So I was late getting the doll done and I don't like to be late. I like dolls to be done when I say they will be done. So more time than necessary (in my opinion) had passed than was reasonable and I told myself I HAD to get the doll done on a particular day, no excuses.
Remember those wonderful reference photos I said I had received? I didn't print them out like I should have. It may have been because I didn't have printer ink at the time or I may have forgotten. Either way they were not in the order book. *sigh* So I went into the book to see what colors I needed. And that was all I actually checked. Somewhere along the line my brain turned "endurance" into "eventing". Enough had been going on that I forgot I had reference photos so I went and looked up eventing so I would not make mistakes. And this is the doll I ended up with. 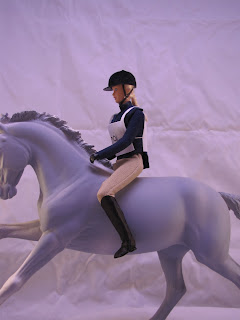 She was nice, I liked her, her vest came out really well, I like her boots, etc. And then I went back to the saved emails to get the customers email address to send her some approval photos. And then I saw the part about half chaps and short boots because tall boots are right out for endurance because they would get very uncomfortable over the long distances.
Uh oh.
So I went back to the notes and really read them and looked at the reference photos and started kicking myself. Not only were the boots wrong (and not really possible to change without wrecking the doll) there was no vest needed, just the pinny. I could have taken the vest off and saved it but with the boots being totally wrong it made more sense to make a whole new doll.
So I wrote to the customer who was very sweet and said no problem that I was late, had made the wrong doll and now there was more of a delay. We agreed that the doll would be done after the holidays. Now I know technically there is another holiday right around the corner but I figured since Christmas was done (the actual day if not all the get togethers) that I needed to get that doll done. And correctly this time. So yesterday I finished up making the new clothes and putting the new doll together following the notes and specifications every step of the way. And this is what the new doll looks like. 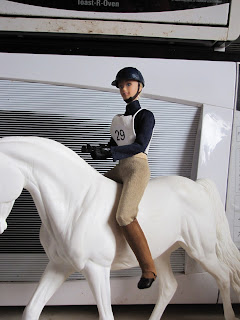 She looks similar to the original doll I made but in person she is almost totally different. I am not sure if the customer will like her just yet as I only sent the approval photos a little while ago and am waiting to hear back.

This was a good lesson for me though. Even if you think you know exactly what you are supposed to be making, if it is a custom order make sure to take good notes and actually use them. Otherwise you may just have to do the work twice :)

Posted by Field of Dolls Studio at 8:54 AM

Sad to say but I have done something very similar... Both dolls look great, though! :)

Thanks. Sometimes you can get some pretty cool things from a "mistake"