I Had a really good show day yesterday. I wasn't even originally planning on attending the show bu the hostess is a good friend and said I HAD to go, lol. So I did and it was a really great day.
My first class was cutting. This is Johnny Cash moving into the herd. 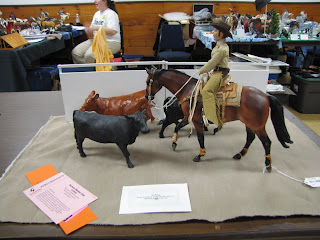 The next class was "other stock work". This is Johnny Cash doing his team penning entry. 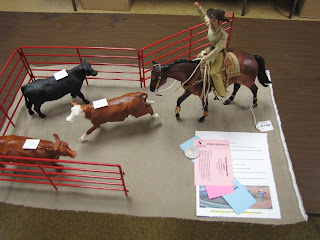 The third class was other western. Because I like cows and it's fun this is a scene where Johnny Cash is moving the cows down from the summer pasture. It was amazingly also the only time I used my fancy diorama all day. 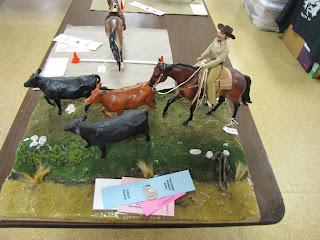 The next photo was my other, other western entry. This is Skippa Latte doing her western riding entry. It isn't all that interesting and only earned a 1oth place. 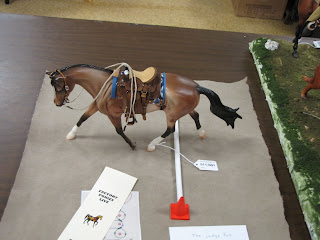 Next was games. This is Johnny Cash again doing his two barrels and a pole game. The idea and photo reference came from Jennifer Buxton's blog awhile back. Even with the great reference it only got 6th place though I didn't check and see what else was on the table. I thought it was really cool. 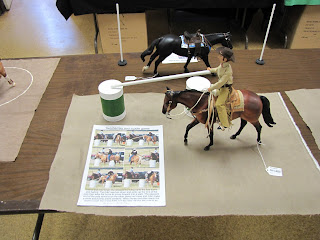 And here is my other games entry. Skippa Latte did the tennis ball relay. That was good for 3rd place though personally I thought the barrels and pole game were cooler. I guess it seems like balancing tennis balls on a racket is harder than turning a pole. I haven't personally tried either so I am not a good judge of what is a harder game. Though the way this doll is holding the racket she will have to reach across to dump the ball in the bucket. 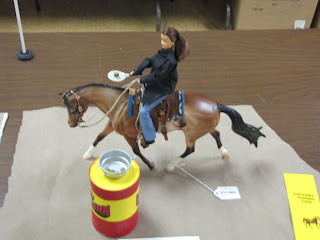 Next Skippa Latte is doing her arena trail entry. This earned her her first NAN card of the day... 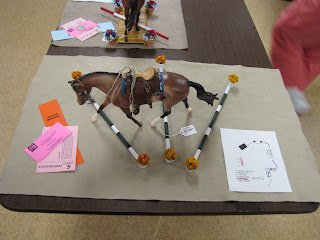 ...With Johnny Cash receiving first with his arena trail entry. I have done a bridge entry with him several times before but I found a new trail pattern that had a pole on the bridge for him to step over. I guess that made this entry a bit more interesting. 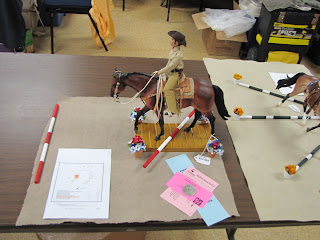 This was just another shot of the same bridge trail entry but I included it because it had both my entries in it. 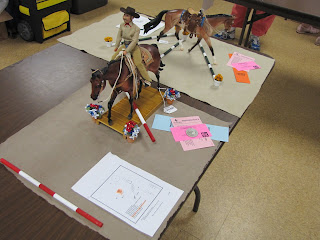 Though I mostly only took photos of my own entries yesterday (which made for a super relaxing show day) there were some very interesting fun classes. This next shot was in the "pimp my FAS" class. I believe this was put together by Lindy Pinkham and it was the winner of the class. 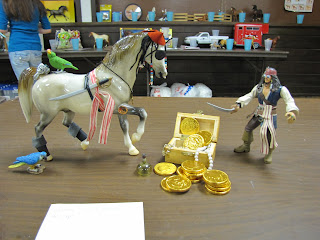 There was also a FAS performance class. This is Joan Fauteux's entry. I don't know the horse's name or who made the tack but I made that doll. Joan owns 11 or 12 of my dolls (maybe more...) but this was the first one she got. I believe this entry got second place. 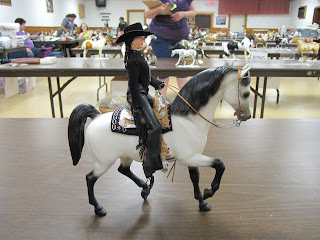 This entry was Laurie Lape's George Stubbs self portrait. I made this doll as well and he tortured me for a long while. He was one of those dolls that just won't leave. Every once in awhile I have a doll that is close to done but something keeps getting in the way of me finishing him and getting him out the door. This was one of those dolls. Even on a FAS he looks pretty good. This was the eventual winner of the class. 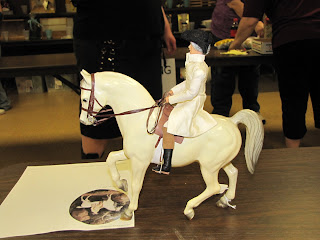 After the fun classes were through we got the results of the western performance division. Johnny Cash and Cowboy Bill managed champion! 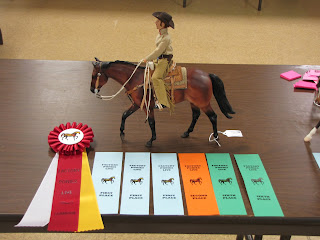 Next was the English division. I completely forgot to take a photo of my first entry which was a Handy Hunter in the Hunter/Jumper division. This was the first time I got to use my new tack I received from Jennifer Buxton and I hadn't adjusted the bridle quite right. So in hunter/jumper Lady Intrigue received 6th place and then got a tack adjustment. The next class she did was games. Here we have that tennis ball relay again. This time it was good enough for first place. The doll is also new and one I actually made myself. I only used Lady Intrigue for the English classes so my usual hunt seat doll (made by Joan Yount) took the day off. 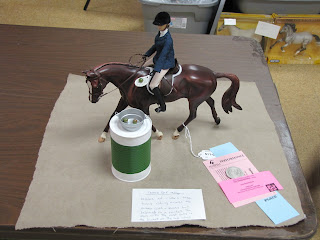 Next was English arena trail and I entered the exact same entry (with a different Strapless) that I used in the western division. I would really love to come up with some new trail entries that can be used for a trotting horse but I have a very hard time finding patterns. 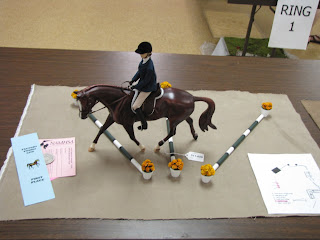 Next was my other English entry. I as usual put in my therapeutic riding entry. This time with the new tack and new doll. It did very well and I was thrilled. I am working my way towards a merit award with this entry and I believe I am up to 8 NAN cards now! Only 4 to go... 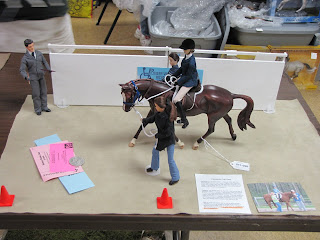 There was a snafu with my dressage entry and she got 6th place. I forgot to take a picture. Then there was English pleasure Where Lady Intrigue received first place but I forgot that photo as well. Even without photos Lady Intrigue had a good day and received the English performance reserve champion. 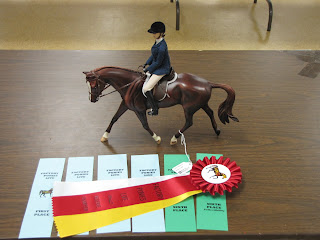 ...and then went on to win overall performance reserve champion. I was cleaning up getting ready for a quick exit (my mom was watching Travis for the day and I was later than I expected to be and didn't want her to be mad at me) and had already put the dolls away. Though now my new BCS tack is easier to see. 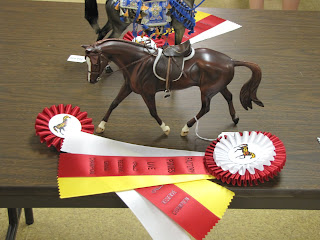 You may have noticed little silver coins in the photos on the first place winners. The theme of the show was pirates and a coin was given to anyone that won a first place. The special performance prize was a hunt seat doll that I donated at the request of my friend Marisa (the show holder). Well, I managed to win back my donation so it was a good (and funny) day for prizes! I probably won't have another show until the fall so maybe I can get around to working on some photo show performance photos.
Posted by Field of Dolls Studio at 8:35 AM

Excellent pictures and congrats on all your good wins! Do you mind if I repost some the photos on my blog?

Not at all Jen, feel free to use my photos, you very gratiously let me use yours :)