The other day Travis's iPad broke (also, not an iPad, just a cheap nook tablet that he calls and iPad). He was very insistent that he wanted dark coffee and to put on socks and shoes and go to Barnes and Noble for an iPad. Travis doesn't usually put in such specific requests, and he doesn't actually ask for all that much, so I figured we could go out and get him a new tablet. After checking prices on new nooks from Barnes and Noble I asked if we could go to Staples for an iPad. Travis is flexible, he said that was fine.
While we were at Staples I seriously considered, again, buying a new laptop. Travis has basically taken over the desktop, though I use it to print out doll photos for my book. I usually use the Chromebook for emails. But it actually belongs to the school and it would be nice to have my stuff on it. Photos, files, all sorts of things that I don't want to put on it because it is not mine. Anyway, I considered but I didn't buy one because I didn't actually like anything they had in the store and I didn't want to settle. So we just got Travis an Amazon Fire tablet and went home.
When we got home I found out that my desktop computer no longer plays well with Publisher. I could not get my doll photo pages to print. It just kept not responding. I started over twice and waited a ridiculously long time, but it didn't work. I finally had to load photos onto the Chromebook and put them into a Google doc to be able to print out some photos. I NEEDED to know how many dolls I have made. It was maximum effort to print a couple of pages of photos and then I had to delete everything I put on the Chromebook. I may actually have to cave and buy a laptop soon. Maybe I can squeak by a little longer.
Anyway, after I got my photos printed and numbered I realized something... 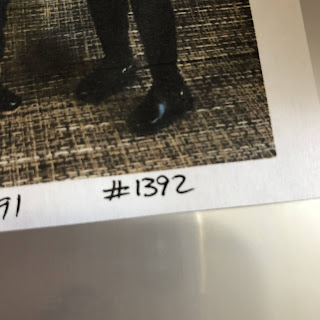 ... at 1392 finished dolls I only have 8 dolls left to reach 1400. Which is an enormous milestone. There is probably no way I can get 8 more dolls finished before my live sale. I just don't have enough time with everything else going on. Most likely I will reach 1400 by some point in early to mid-July. I feel like I should do something to celebrate this. But I have no idea what. Sometimes when I have a milestone doll I try to plan on doing a particularly cool doll. I have no ideas for cool dolls. I have no ideas for cool contests. But I am a little bit in awe of what I have managed to do. I wonder what 1400 dolls would look like all together. The largest group I ever photographed was 32, which was the group I did for Breyerfest last year. That did not take up that much space. But 1400... would be amazing. I wonder how many of those dolls still exist.
Posted by Field of Dolls Studio at 2:30 AM

1400 is an amazing accomplishment - congrats! I'm sure you'll think of a fun way to celebrate!

Wow. You've definitely beaten me at 456 Western saddles. One does wonder how many are still around. I know some of mine have been lost to flood, fire etc but that number is surprisingly small, less than 10. I'm low on doll ideas but you might think about a Parade rider.