A Horse With History

Purdy Zippin Chick started her life on Tiffany Purdy's workbench. She is a customized Strapless with a Ruffian head. When I was working out the deal with Sara we were talking a bit about the horse and she said she bought her from Erin Corbett. I started wondering about this horse's history. And I have had a lot of fun looking into it.

When I contacted Tiffany said I should ask Jennifer Buxton for photos. And when I did, Jennifer sent me the links to a couple of blog posts where Pudy Zippin Chick had been included. So I learned she started her showing career on February 9, 2013 at the Sleigh Rally Model Horse Show in Columbus, Wisconsin. She apparently won everything. She did well in English, Western and Other Performance. 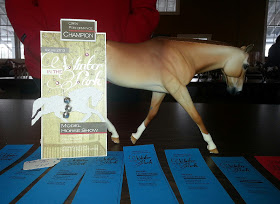 Tiffany Took Purdy Zippin Chick to NAN in 2013 where she got reserve champion in hunt seat pleasure-stock/pony. Jennifer sent me a link to the blog posts to help me with my research. And that was where I saw that the year Purdy Zippin Chick won reserve...
Was the same year Caramel Latte (who is mine) won Champion! What a weird coincidence!
But then the small-world connections kept going. Purdy Zippin Chick went on to win champ in western pleasure (Caramel Latte missed that class) but the horse in the background of this photo won reserve champ. And that horse is owned by my friend Marisa, the one who showed Caramel Latte at NAN for me! How cool is that?
Tiffany told me that NAN 2013 was where Erin first saw Purdy Zippin Chick and decided she wanted her. That was also the show where Erin and Tiffany became good friends. I don't know if it was because of the horse, but it was something that brought them together. Either way, I think it's really cool.
Erin showed Purdy Zippin Chick at Breyerfest live in 2013. This horse really looks excellent in so many different setups. 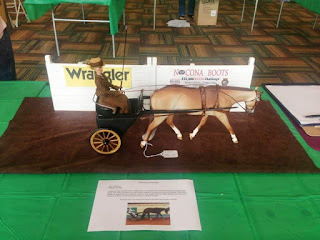 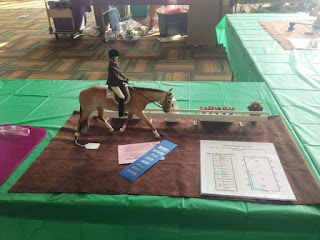 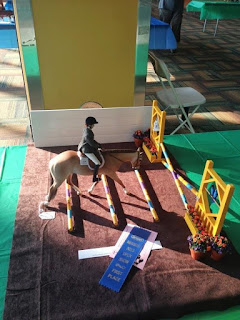 ...and got English Performance champion! Then the show got incredibly hectic and Erin didn't have time to get any more photos.
Purdy Zippin Chick went on to win Overall Performance champion at Breyerfest live. That is an amazing accomplishment! It does exclude her from being able to show in performance at Breyerfest however. Which is sad. Erin showed her a few more times at local shows before she decided to let her go to someone else. 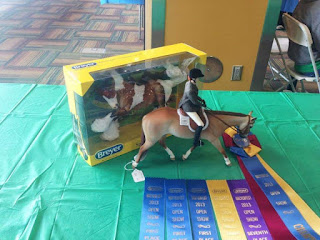 At some point Erin sold Purdue Zippin Chip to Melissa Hart, who did not show her. Then she was sold to Sara Bowman in 2016. Sara then showed her extensively from 2016 to 2018. She showed her in a wide variety of classes, including Other Performance classes...

Sara showed Purdy Zippin Chick in everything she could think of to show her in. She was a great show horse, but Sara is a lot like me and will show a horse (or two) extensively and then show a new horse and the older ones sort of get left out. When Sara sold her to me she sent me a very large stack of NAN cards that the horse had earned.

When I saw that Sara was selling this horse I was really interested. I have not really wanted a traditional scale horse in a long time. Other than Beauty Queen (my NaMoPaiMo horse) I don't remember the last traditional scale AR or CM I added to my collection. It's sad that I can't show her at Breyerfest, but I will get over it. Purdy Zippin Chick has had a very impressive show career over the last 7 years. Now she's mine and I feel I really need to make the effort to keep her legacy alive. I need to think up new and interesting ways to show her. This should be fun. I am really looking forward to adding to this amazing horse's history.

That horse has traveled and showed a lot! I love all the creative ways to use the model.

It sometimes seems like there should be a "Hall of Fame" of sorts for these models that are so successful at so many shows. Maybe Breyer should make a model portrait of the model... lol.