Friday was Travis's last day of school. In a few weeks I will start back up with a summer program for him, but for now he has earned a break. Especially since Mom doesn't give breaks during school. I completely understand that breaks are important, but he is not doing 6 hour school days with me. And he would take nearly continuous breaks if he could. He did a great job in Mom-school and I am sure he will do just fine in Mom-Summer-School. But we will have a break first.
I had a lot of work to do for my school on Friday as well. I finally got a student back into a Zoom class for much needed extra help. We worked for about an hour and a half catching up on assignments. I pre-planned another Zoom class and I am gathering all of the missing assignments from all of the student's teachers so we can be prepared. Only one week left, time is running out.
Since I had already finished all the saddlebags and dolls for the week, and school and school took so long, I decided not to do anymore doll work. I did some deep cleaning around the house and then decided I wanted to start putting the backwards numbers on things for my live sale. Getting this done is a big head start to finishing up sale prep. I have all of the cross country kits and saddlebags numbered, and all of the dolls that are currently finished. I also have photos of everything and will publish a catalog of sorts on live sale day. That way people who check the blog early can start thinking about what they want to try for. 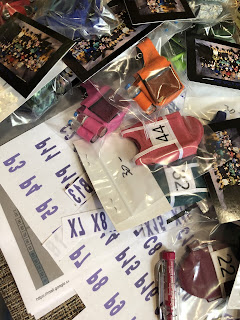 It's hard to feel like you are making progress when the items you make are fairly small. This bag contains 24 dolls, 20 cross country kits, 16 sets of saddlebags, and 16 sets of saddlebag stuff. And it doesn't look like much. I will add a bit more to it before I am done but I can literally fit everything for my live sale into a shopping bag. 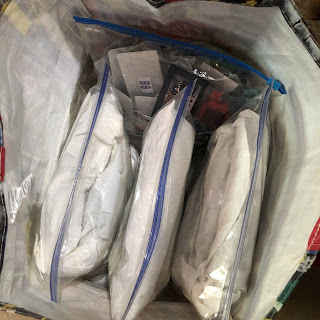 The other day I mentioned the really cool replica bills that I bought for Travis to use to practice money math skills. A few weeks ago I got another set of fake bills along with some really nice quality play coins. The bills look incredibly realistic, but the ad is deceptive. They are about half the size of regular bills. In the ad they had a small child holding them fanned out in front of her. The close-up of the money, with the child behind, made it look like they were excellent play bills. But they are small and I am not a fan. So I decided I would list them on Mercari. I was not looking to get more than maybe a few dollars for them and shipping. Someone might be into educational bills that are the wrong size. 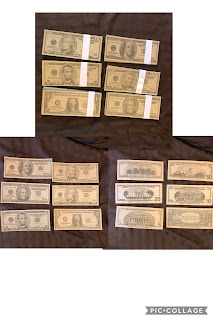 Well Mercari pulled down my ad and sent me a warning for listing prohibited items with a link to their prohibited items list. Play money is NOT on that list. Real bills, counterfeit items or replica currency is. I emailed them and asked how my much-smaller-than-real size bills (which was clearly stated in the ad) can be considered replica. They wrote back to me and said they looked into it further and the warning stands and they sent me the link for the policy again and said not to relist the item. That doesn't explain a thing! There are other listings for play money on Mercari. Very frustrating!
So I have a bunch of smaller than real sized bills that I don't want or need. Anyone have some kids that want play money? There is a good amount of it and other than being smaller than real-life they are very realistic.
Friday the second episode of Artist Unlocked dropped on Youtube. This was the episode where Emily interviewed me and I had a ton of fun! I am looking forward to more episodes and learning a bunch of new thing about a variety of artists.

Loved the interview! I think Emily is doing a great thing for the hobby -- looking forward to "meeting" many more people through her videos.

Loved your interview! I remember “ghost in a jar!” And I am super impressed with how prepared you are for the sale!. I can’t wait to see all the goodies. Those orange saddlebags are calling my name!