I love miniatures. I especially like nicely made realistic miniatures. That is probably why I am so fond of so many model horses, model horse tack and cool props. I just love cool miniatures, I always have. Recently I saw on Facebook some really awesome miniatures done by a lady names Kim (that is everything I remember about her). She does really fantastic, detailed, highly realistic tiny food items. And other things, but I mostly like the food items. So I started thinking about miniature food. I used to make miniature food from play dough and it was pretty good. But the stuff that people make from polymer clay is really impressive. I figure you can learn anything on the Internet so I started looking for tutorials. I found several, both in print and on Youtube. I read or watched and figured I could follow the instructions pretty well and make some cool miniature foods. So here are some of the first results.

Bread was the item recommended as a very good beginner project. It's not too hard to make nice, realistic bread. And I have to agree, it was not hard to make these. However I have since then learned some other cool tricks that I want to try out on other bread. 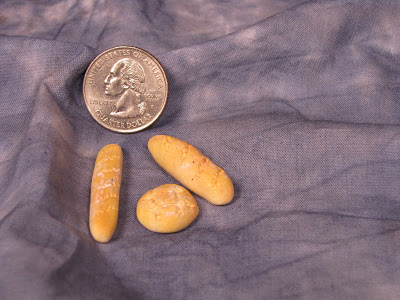 I also worked on some miniature pastries. Again, I have since then learned some cool tricks that I think will make for even more realistic pastries on the next batch. Plus I finally got some corn starch so everything can stop sticking to me... 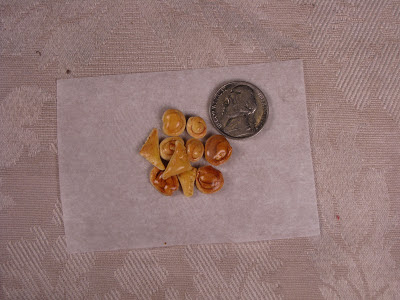 One of the real foods I make that people love so much is pumpkin bread. So I figured I had to try to make a pumpkin bread. I didn't have instructions specifically for this color bread so I sort of guessed at it. I think it came out OK but I do think I can do a better job. Especially with the new tricks I learned. I just have to find the time. 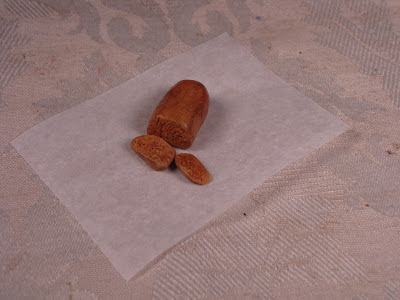 I also wanted to try making some pies. Thanksgiving is coming up and most everyone loves pies. The first one I made was actually the pumpkin pie and that one is my husband's favorite. The key lime had to happen because key lime is my favorite kind of pie and the last pie is cherries or strawberries and cream. That one was to test the clear sauce. I would do it differently next time I think. 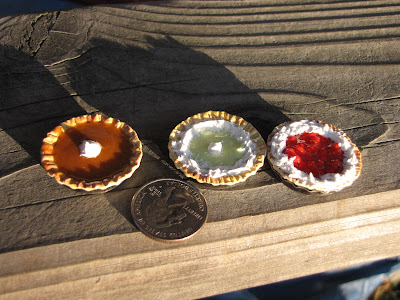 The pumpkin pie was the only one I actually had detailed instructions for. That may be in part why it looks better than the other ones. Though I do think they are all fun. And really small. I want to do some even smaller sooner or later. I know, I am crazy, but you all knew that anyway. 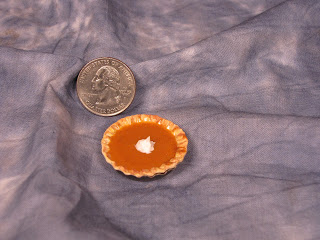 So since I like to make things and I don't have room to keep everything I ever make I decided to open an etsy shop to sell my miniatures and other non-model horse craft items. So far only a few people have found their way into my shop but hopefully more people can find it soon.

Posted by Field of Dolls Studio at 7:17 AM

Those are awesomely detailed and realistic! Makes me want to eat some of the real version!

For your clear pie fruit gel are you using liquid sculpey/transparent or is it gel paint to get the translucence and texture?