"Free" stuff, aka Trading is FUN!

Am I the only one that feels like trading is getting free stuff? I am well aware that I am "paying" for everything I get but trading makes it almost seem like I am getting a gift. And who doesn't like presents? Most of the items in this post were paid for through doll trades. Either way, I have gotten some really cool stuff without having to shell out much for actual green money.
This first item is a trade from way back. I was at a show and happened to notice that Liz Roman had some cool tack for sale. I happened to have a CG Valentine that needed tack but was a bit small for regular sized traditional western tack. I borrowed a horse from my friend  Taylor (with the sincerest promise I would not hurt her OF halter horse, I just wanted to see if the saddle was the correct size). It was! So we agreed that I would make a doll in exchange for the saddle. Liz also made the bridle but I actually bought that. It's the one I often use with my beautiful western saddle made by Jennifer Buxton. The bridle Jenn made to go with the set is beautiful but I really like the look of this one on my Victrix. Anyway, I am including this particular trade even though it is from over a year ago. Just about a month ago (maybe a bit more) Liz decided what type of doll she wanted in trade. So this is finally complete and the saddle is finally officially mine. 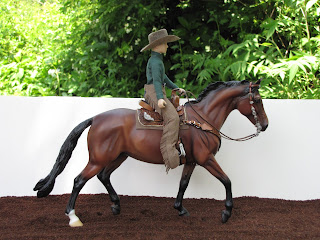 Next up on the trading is fun list is this Lola resin. Her name is Showgirl (and the reason behind that should be obvious). So far she has not shown all that well in live shows but she does well in photo showing. She may also start doing better at live shows. I have a trade in the works for a bridle to fit her big mule head. Anyway, I haven't had a mule since I traded my Mulinette and since I could trade for her how could I refuse? So I got a pretty mule through a trade. 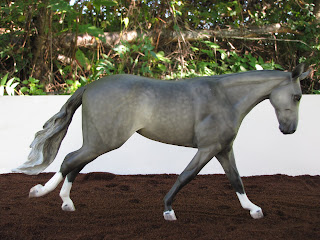 Next up I got this simply AWESOME jump from my friend Marci Driscoll. It is very much like the jump she made for herself but with brown instead of black accents on the standards. I know it's not a pretty picture but it's the one I have at the moment. Since this photo I have added greenery to the pots. Now I just need a chance to use the jump. It's not officially "mine" just yet as I haven't "paid". I am trading Marci a doll for this as well but she hasn't decided what she wants just yet. I know I want to play with my jump... 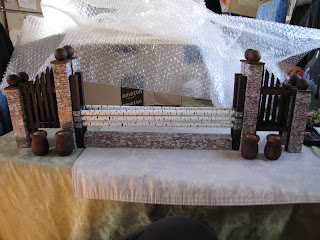 Up next is this super gorgeous tack set I got from Jennifer Buxton. It is actually...the fourth set I have gotten from her. I have traded for all of them. I am starting to think that maybe I am a bum and taking advantage of Jennifer's need for dolls ("everybody needs dolls") but I love her tack SO much and I love trading. Again, I don't officially own this set yet as I still need to make the dolls for the trade. At least I know what they are :) I would have been happy with any style of English tack that Jennifer made me but I was really excited to see that this saddle is a slightly different style than the others that I have. It's not essential but it's fun. 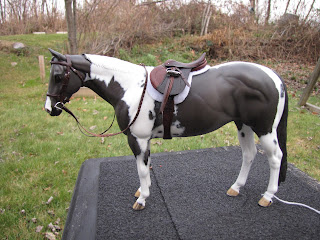 Then there is this lovely Knightly Cadence. I traded Barb Manley my Nocturno resin for him. I am thrilled at this trade as I have been wanting a KC for a long long time. This guy is a lovely color and is even more gorgeous in person. Now I have the difficult task of coming up with a name for him. He really wants to get some tack on...and maybe play with Marci's jump...(photo by Barb Manley) 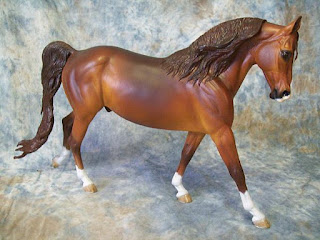 This last photo is for the poles. And this actually was a gift. I don't like painting poles. I am not good at it. I don't have the patience to wait for layers and layers of paint to dry, I can't do stripes without taping. When I tape I end up with paint lumps. It's not something I enjoy. However my friend Joan Fauteux really likes painting poles. And she is very very good at it. She did these mostly freehand! She does use light pencil lines but no taping. They are very smooth and pink!  They go very nicely with my pink flowers. I did give Joan some wood dowels but that was also more of a gift than a trade. And I got the WAY better end of things! 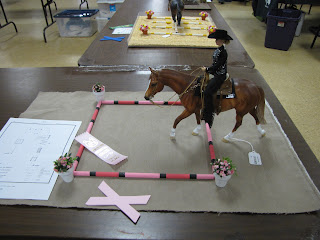 I was very burnt out from showing last year and started selling all sorts of things and really downsizing my props collection. This year I have really started adding things in again. I have a bunch of new potted flowers that I made, new ground poles, a new jump and I also bought some very nice dressage rails. There may be other things as well that I am just not thinking of. I am trying to get my motivation back for live showing but I have actually been having a great time judging. It's so relaxing showing up to a show with nothing (OK, I NEVER have nothing as I have to bring the kids and they have luggage and I need the cooler and so on...). I've been enjoying photo showing quite a bit recently and that is very relaxing compared to live showing. You can take as much time as you need to set up your shot. Though doing photo backs isn't always fun.
So in closing, I really like to trade. I am not always looking for anything in particular but it's possible I can be tempted. Especially if you are willing to take payment in dolls :)﻿
Posted by Field of Dolls Studio at 5:26 AM