The evolution of my therapeutic riding entry

In November of 2009 I did a post on therapeutic riding as a live show entry with some background from real therapeutic riding. After rereading that post I am amazed that anyone at all follows my blog. Wow I was not a very good or interesting writer then. I don't know why it was so bad. So I figured since I have been posting a lot with updates on my evolution I would continue with the theme. It also gives me something else to write about.

A good place to start would be; what exactly IS therapeutic riding? Therapeutic riding or assisted riding is used to "treat" all sorts of handicaps. Studies have shown that the movement of the horse centers a person and their affliction is easier to deal with. Some people think that's a load of poop which is why insurance companies won't cover it as a real treatment. But really, can you honestly tell me that this kid doesn't look centered and calm? and he is certainly connected with his horse (this is one of my all time favorite photos) 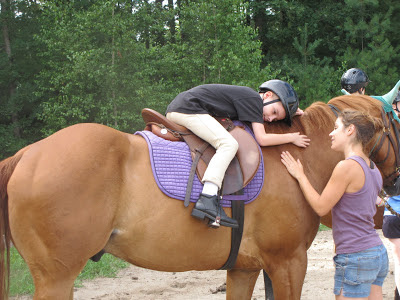 Another important function of therapeutic riding is it is a fun way to learn to follow instructions and pay attention. Both are very important life skills. Also some games that are played during lessons can be useful to build other skills, including turn taking, math and other things. Plus it's fun!

So next let's talk some about equipment. Any English saddle can be used but I am pretty sure most of them at Travis's school had tug straps (handle? I don't really know what they are called). The horse's do wear bridles but the reins are nearly always looped around the horses neck. The bridle is there to be almost like an emergency break for the leaper if something happens. Even therapy horses are still horses and you never know when they will see a horse-eating plastic bag blowing by. A halter is worn over the bridle. There is a lead rope attached in the usual way and there are also side pull reins attached to the front halter rings. Those reins are what the riders use. That's mostly all you need for equipment except for the most important part. People. 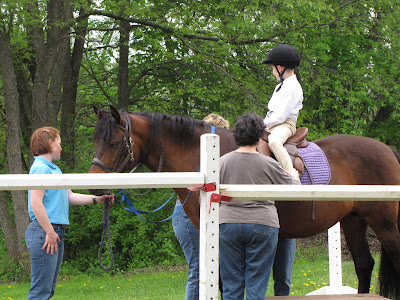 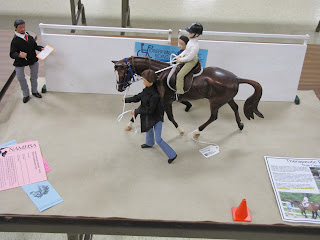 People are an essential part of a safe therapeutic riding program. At the very least you need a leader. It's the leader's job to work with the horse to carry out the instructions of the rider. Side pull reins are not as effective as bridle reins so if the rider pulls left the leader will gently lead the horse left. But only if it's needed. If the horse is paying attention to him mount he will go where he is directed. The other people involved with the rider are the side walkers. There can be one or two as needed. Some riders don't need any at all but it's usual to have at least one.
This photo shows a great view of the reins looped around the horses neck as well as showcasing Travis's excellent posture. His side walker was repeating the instructions given to him by the instructor. 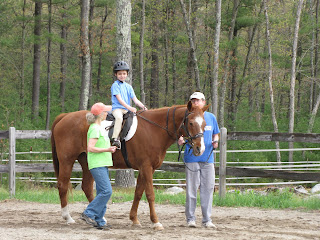 I like to include this photo because I was once told at a live show that my entry didn't place because my horse was trotting and they NEVER trot in therapeutic riding. Well, they did at the Pioneer Valley Therapeutic Riding Association (which was indeed NARHA certified) and I got plenty of good workouts running around the arena. I used to be a leader as well as a side walker. I figure like everything else, all schools have different rules. And that is something very important to keep in mind, make sure you have documentation as some people insist that you don't trot in therapeutic riding but in Travis's school it was everyone's favorite part! 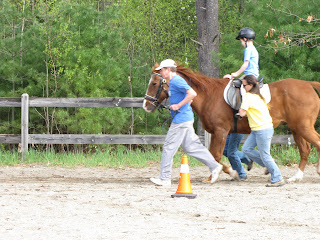 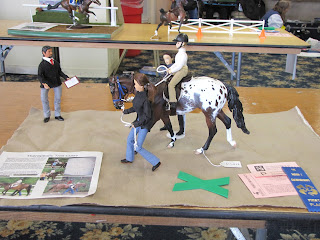 So now let's move onto the evolution of my live show entry. This one was taken at the Region X regionals in 2008 (as the candy bar clearly lets us know). This was the original way I used to set up the entry. A rider holding the bridle reins, a side walker and a short explanation card. It was still different and interesting so the judges liked it. And it was accurate as there are times when the "assisted" part of assisted riding is really just a side walker who is there just in case help is needed. Usually though if there is only one person it is the leader. But my entry evolved 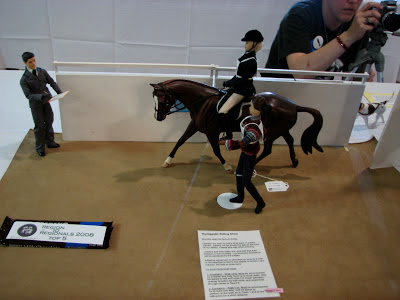 This next photo was taken in September of 2009 (two weeks before my wedding...) at North East Congress Live. It was a stock horse only show so I switched from Lady Intrigue (side saddle Strapless) to my Party Girl Strapless Skippa Latte (who I show as an Australian stock horse). The entry had evolved a bit more and I now had the reins looped around the horse's neck a leader and a side walker. I also started using photos. 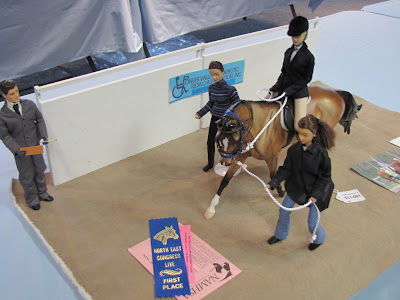 The next thing I did was to use a child doll instead of an adult rider doll. Adults absolutely ride in the therapeutic riding program. I actually usually worked with the adults. They would ride during the early part of the day and I could go volunteer while the kids were at school. For this entry I had a bit more interest with new documentation that mentioned a trail class. Plus I had the photo of Travis to show proper equipment set-up. The tweezers didn't stay for the official class. This photo was taken at Factory Ponies Live in June...2010? I'm not sure on that one. 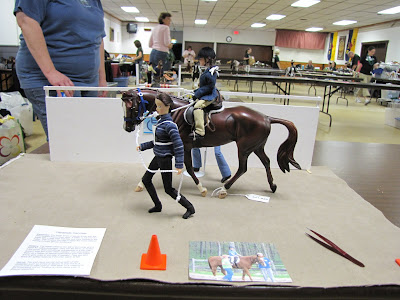 Finally my therapeutic riding entry evolved to what I wanted it to be. I had a leader and a side walker, proper equipment and my "Travis" doll. I also had new documentation with a copy of the trail pattern used at one of the shows Travis rode in, photos of Travis riding in the show and a very detailed explanation of the therapeutic trail class. The entry had come so far... 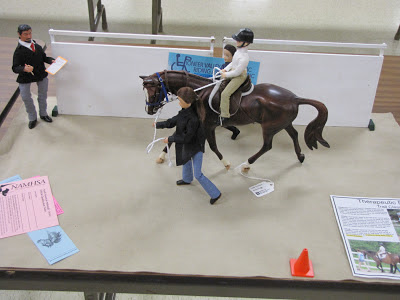 ...it even placed well when the horse was performance the wrong gate! It took awhile for me to believe it but apparently this horse is loping.It still looked very nice and impressed both the regular show judge AND the stakes judge. This entry was at the Region X Championship show in 2011 and got reserve champion. 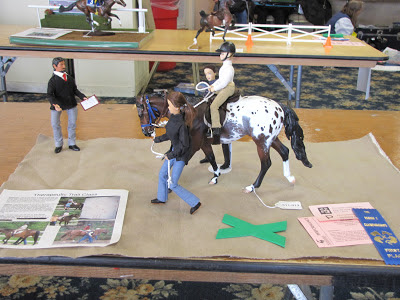 Finally the most recent way I have set up my entry was this. Therapy horses need to be nearly bombproof but to make sure they are you need to test them. So the way that is done is the most experienced rider gets on and you bring out a whole bunch of volunteers and toys and you see if you can spook the horse. We don't really WANT to spook the horse, but we have to do odd and unexpected things as you never know what the riders will do during lessons. So we run next to them and occasionally bump them with our hands or elbows, the rider will flail the reins and move around in the saddle. We toss toys over and near the horses. It really is a very bizarre time. Once this entry did really well. That was at the Quabbin Valley Performance Open. After that the best I could get with it was third. Either people are tired of seeing my therapeutic riding entry or they like it better when it is neat and set up for a show. I am chasing one more NAN card for Lady Intrigue in therapeutic riding though so I will keep on trying. 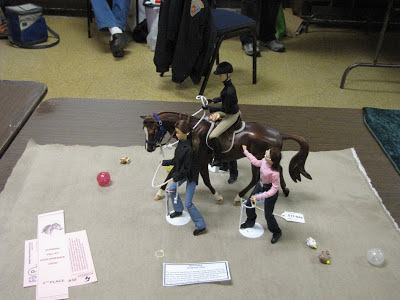 therapeutic riding is a very interesting live show entry and very interesting in real life. There are lots and lots of different ways to do it and unless it's dangerous, not too many wrong ways to do it. If you want to give it a try do a little bit of research and see if you can find photos and descriptions. Or better yet, call around and find a therapeutic riding school near you and get some hands on experience. It is a very worthwhile experience.
Posted by Field of Dolls Studio at 7:12 PM