My favorite band is Halestorm. I have never in my life had a "favorite" band but I have loved the majority of the music they have put out and the love has persisted for years. That's usually when you can say you have a favorite something. I love the band so much I named my pony, Halestorm. He is a custom Stone pony created by Julie Brooks in 2011. I bought him from my good friend, Joan Yount. He’s a wonderful and fairly versatile little pony and is pretty fun to show. 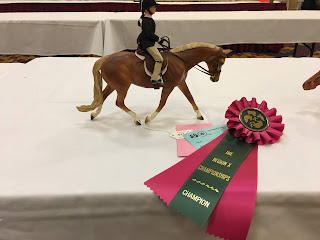 Halestorm started his showing career with me in 2014. He’s really great at a wide variety of classes, though I have only ever had him in English equipment. I keep trying to get western tack that fits him, but it’s tricky. Maybe that will be my new goal for this year. I think I need to find classic scale tack, but I'm not totally sure. Anyway, could be a goal. You never can tell. 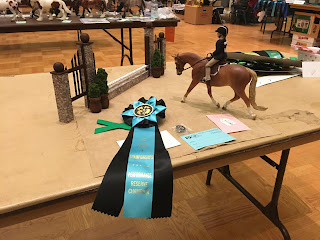 Halestorm has brought in bunches of NAN cards, ribbons and rosettes. And did I mention he was fun to show? I mean, he’s a pony, so he has to get bonus fun points for that. Doesn't he? 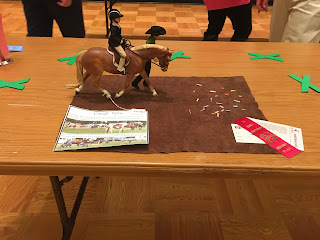 Sometime last summer, during my wild purge of everything I own, I decided to sell Halestorm. I hadn’t really been showing him much and he mostly just sat on the shelf. When I mentioned it to Joan she said she would like to buy him back. So I sold him back to Joan and sold his tack and doll and didn’t think about him much anymore. It’s easier when you sell something you love to one of your best friends.
Then a couple of weeks ago I was looking at one of Joan’s doll ads on MH$P (because I always look at her doll ads) and there was Halestorm. The little doll was riding bareback because Joan doesn’t have any pony sizes tack, but they sure looked cute together. I instantly missed my pony. So I asked Joan if she would sell him back to me because as soon as I saw him I had a longing for him to be back with me. She said she didn't have any pony sized tack and didn't really have time to make any at the moment so she would and that it was nice to “keep him in he family”. It’s true.
At almost exactly the same time as I was seeing Halestorm in Joan’s ad my friend Marci posted an older Braymere tack set that had been made to fit a Bouncer. I have an OF Bouncer sitting in a box, a deep love of Braymere tack and a tradeable skill. So I asked Marci if she would be interested in a trade and she happened to need a doll. Sometimes life just works out. I got even more excited when Marci said the tack would fit a Stone pony as well.
Perfect. 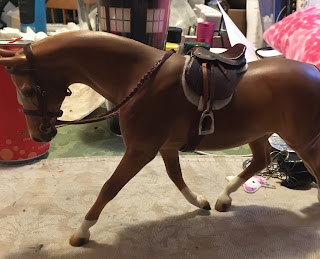 Since Marci and I both work in schools, we both have February break this week, so we scheduled a pony play date. I went over to her house and brought her the new doll I made her and I brought Halestorm, who arrived on Tuesday. Just in time to go out and play! I think the set is an excellent fit on Halestorm and makes him look like a fancy hunter pony. I don't know why I think that, I just do. I show him as an Australian pony and it works. Anyway, I tried Marci's youth doll and a sales youth doll I had on hand. Neither was a good fit for the saddle. And I wanted everything to be as perfect as I could get it. So I pulled out a smaller doll when I got home and got ready to super-customize her. 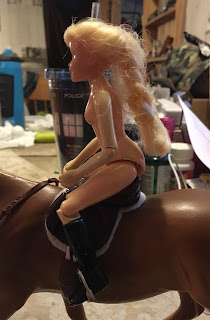 Still not a perfect fit, but I can make it work. I have never actually customized a doll specifically to fit a particular saddle and it has been an interesting build. First I pulled off her thighs and remade them a bit shorter but left her knee joint. I didn't like how it looked. The thighs ended up a bit too short and her knees were still not in the right place. So this morning I decided to take her all apart, again, and start over. 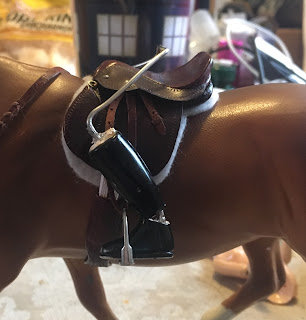 Here we have her boots/lower legs, sliced in the back and braced with a bit of wire so she can be in a proper heels down position. Then a knee/thigh wire was super glued into the top of the boots. The shape worked and now I was confident I could get the doll made in a way that would fit the saddle well. However I forgot to do the gluing after the legs were through the pelvis. Oops. So I cut the leg wire in the center and super glued it back together in a small medical tape wrap. I don't think the wire is actually back together, but it is firmly attached to the medical tape, which is also firmly closed. And that make her legs moved slightly more realistically. What a happy accident! 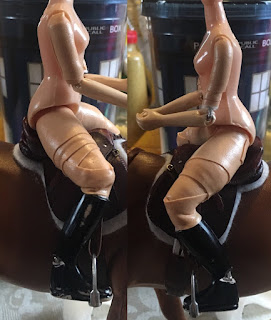 Finally I got the thighs wrapped and the arms done. I think she looks fairly natural now. Other than the fact that she is mostly made of medical tape. Once she gets her clothes on she should be great. I am thinking that I will dress her in a pale pink shirt and a black coat. The same as my last youth doll. But I love the look. I don't like the cartoony head this body came with so she may get a different one. I have to check the body parts drawer and see what I have.

The only other problem I had now was that the reins on the bridle were too short for a Stony Pony neck if I used a doll. Since I live in the land of no-fear crafting, I looked in my box of leather lace and found a piece that was the same width as the reins and nearly the same color. And I splice in a couple of new pieces to lengthen the reins just enough that the doll can hold them. If you look for it you can see the difference (maybe not in the photo, but in person) and if the doll is not holding the reins you can see the difference, but in general it looks good and it totally works. 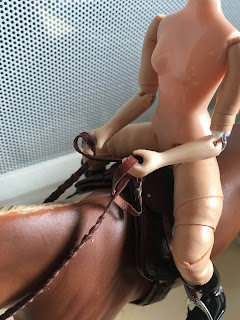 I think I have a good start on this doll and can hopefully get time to finish her in the next couple of days. I have a show coming up on March 10th and I want her in it. Definitely clothes are required for that. 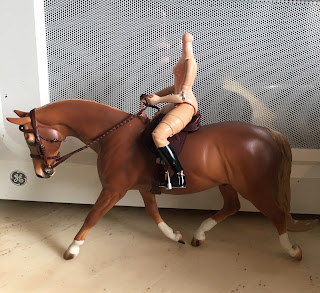 I was going to wait to do this post until the doll was finished. But then I saw that Jennifer Buxton, of Braymere Custom Saddlery, was nearing her 5,000,000th page view! Holy cow! That is an amazing accomplishment. It made me curious so I came to check my blog. I didn't have a page counter showing so I went and figured out how to add that. I have a bit over 103,000 views, which is actually really amazing considering I suck at keeping up with the blog and I don't always have anything very interesting to say. I also noticed that quite a lot of my traffic comes from referral links from the Braymere blog, lol! Jennifer is really great about things like that!
Anyway, I wanted to keep up my blogging momentum (3 posts in one month! This is madness!) and send out a congratulations to Jennifer, who did in fact get her 5,000,000th page view. She does have the best hobby blog out there so it makes sense. I have always enjoyed her blog and have learned a lot from it. Here's to the next 5,000,000 Jennifer!

Posted by Field of Dolls Studio at 5:54 PM