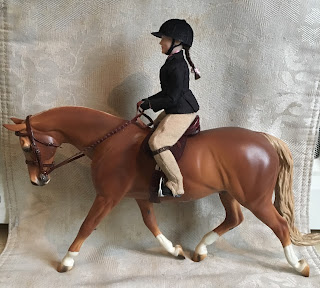 There are shows when I think very little about show prep. Sometimes it is basically just making a list of the classes I want to enter, which horses I want in those classes and what equipment they need (or that I need to take off) for each one. This is not one of those shows. Not only did I buy Halestorm back from Joan but I bought a new-to-me tack set that fits him very nicely and decided he needed a new doll. Which was also a necessity because I sold his other doll with his other tack. That project has been going on for a few days now. 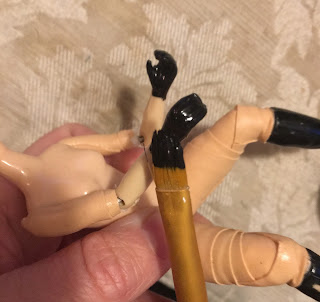 This morning I got back to work on the doll. She got her gloves painted and her boots got touched up at the same time. When that had a good long while to dry I put some matte finish on both. Which is actually a matte clear nail polish that Joan found for me. It really is wonderful stuff, dries super fast and works very well. 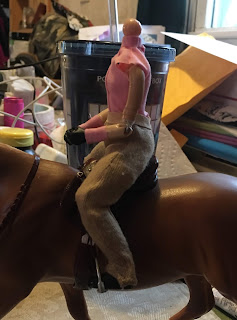 For anyone that thinks the "ugly stage" is just in painting horses or tack making, think again. Dolls go through several ugly stages. There are times when a doll looks ugly most of the way through and it is only at the very end, when everything has come together, that they look good. It's always good to push through the ugly stage. 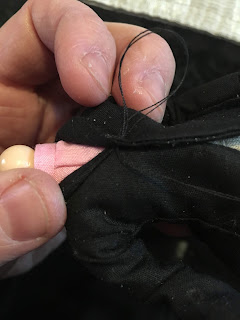 Over the years I have changed the way I do certain things on dolls. I used to glue the coats closed. Most of the time that was no problem at all. But for coats, especially fitted ones, I have been sewing them closed most often these days. I take a few stitches where the buttons should be and then those get covered with a glued on nailhead. 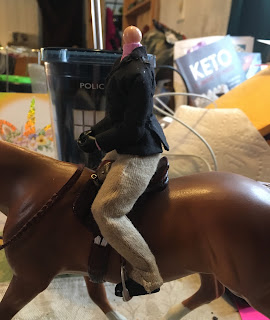 Here we go with a more finished look at the doll. She is still missing a bunch of details and is still pretty ugly. At this point I am hoping that she will come together and I won't have to start most of her over. This can be a very hard stage. 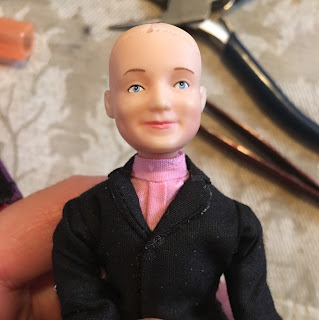 I mentioned that I didn't like the cartoony head that came on this smaller body so I took a look through the body parts drawer and found this one. The neck hole was not big enough for the giant neck peg so I had to carve it out a bit with an exacto knife. This doll had already been almost completely rebuilt so why not put a head from a different doll on her? Plus I like the face and I even like the paintwork. The eyes are crooked, but that is actually in the sculpt. I might decide to repaint the face eventually, but for now at least I like how she looks. 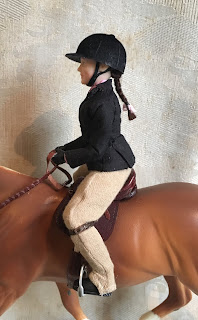 My perseverance has paid off! Sure, her breeches could be a bit more fitted, but kids sometimes get clothes they need to grow into so it's still pretty realistic. 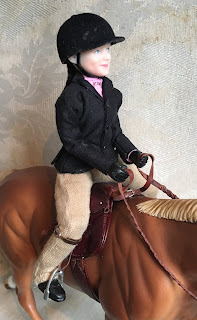 I am one step closer to being ready for the show now. I still have no idea what I am going to show anything in but I have the tack and doll are all set for Halestorm. I ordered a super awesome pad from StudioMaire to go with this set and I can't wait to see how it all looks together. I think so far it's pretty nice. 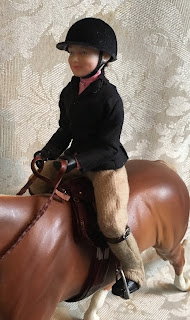 After glancing at the classlist just now I think I will put Halestorm in Hunter Over Fences, English games, Huntseat pleasure, Arena Trail, Other English (though now I need to think of a very clever something to do with her) and Dressage. 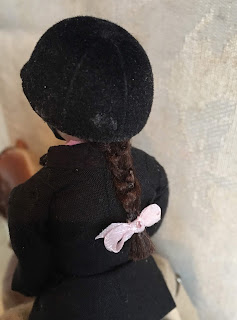 I don't always like to make dolls for myself, but his one was actually a lot of fun to do. I think she came out well and was worth the effort. Hopefully she will bring a bit more correctness to my entries and Halestorm can get back to being one of my excellent show horses. I need to work out exactly what I want to do with her. I am still waiting on some props to arrive, so I don't exactly know what I will have available to work with. A tiny bit of show prep down. And sort of a fun way to spend a Sunday morning. Later I have a baby shower attend and tomorrow I have to go back to work. It's been a really fantastic February vacation.
Posted by Field of Dolls Studio at 8:11 AM