Today I had a snow day. We didn't get an insane amount of snow, and no rain on top of it this time around, but because the elementary schools already had a planned half day for parent/teacher conferences we had to have a cancelation. Which I was actually fine with. I didn't mind going to work if school was open but I was into a day off (yes, another one just a week after vacation) because I knew I could get a ton of stuff done. 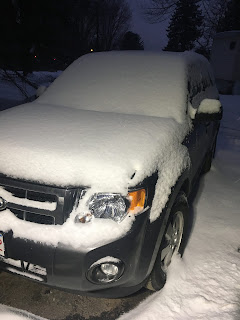 I went out about 6:00 to shovel some snow and make sure Travis could get down the driveway to get to the bus, since his school only had a 2 hour delay. My snow removal was actually quite simple since it was so light a fluffy. I did a good amount of it with a push-broom.
A little bit before the bus would show up I realized they were not going to send a bus for Travis at all. When there is no school in Ludlow they won't sent the bus even if school is open in East Longmeadow. So I needed to drive him. Which was fine, I was planning on going to Walmart and instead of going after he got on the bus I altered the plan and brought him to school first. I got some things packed up that I needed to ship and then... ran out of ink in the printer. So that went on the list. Conveniently before the trip to Walmart. 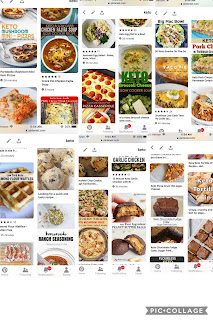 Backing up in time a bit I also spent a good amount of the early morning on Pinterest. I have spent way too much time on there lately. But it is leading me to interesting looking low carb recipes and new websites I didn't know about. So my low carb recipe collection is getting larger and larger. I likely won't talk about them too much until I actually test out each recipe. It seems nicer to be able to offer an actual recommendation. This is just a small sampling of some of my Keto pins on Pinterest. I need to remember why I bought chicken breast today... 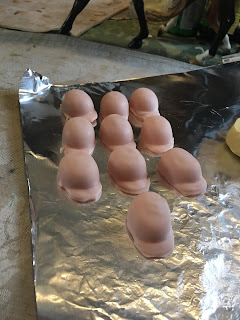 I currently have a lot of dolls in the works. A few weeks ago I decided it would be good to prep a whole bunch of doll bodies all at once. It's sort of a big production to take out the dremel and get everything set up. Plus I dremel out in the driveway so I did a bunch when the weather was a bit warmer. I have thoroughly appreciated having dolls that were all ready to go. One thing I was out of was helmets. There are currently no ready-made helmets available for sale that fit properly on Yvonne/Gracie. So I mold my own. I worked on a batch of those this morning. They still need some trimming and clean-up and paint, but at least I have helmets again.

Another project that I decided on for today was fixing the ear on Mocha Latte. I broke her ear off last fall and I have had it taped to a sticky note (with "ear" written on it) for months. I was going to have Liesl Dalpe fix it, since she was the one who sculpted and painted Mocha Latte, but we have not found a good time to get together yet. And my show is next weekend so Mocha needed her ear back on. And Liesl taught me that everything is fixable. I have actually gotten a lot of my no-fear attitude about working with models from Liesl. The first horse she taught me to prep on was an old Eberl which was a run of 15, riddled with pinholes, badly stripped and a sentimental favorite of his owner. That horse, and Liesl's encouraging and teaching, are a big part of the reason I can prep anything. I also have broken rare horses and then fixed them. When it comes to prepping I have no fear. I am working on that with painting.
I am fully aware that I am not a professional level painter. I have not practiced enough for that, so it is not surprising at all really. I am however fairly amazed that I actually painted Hugh Can Do It (my NaMoPaiMo model) myself. I think he really is quite good. Not perfect, but pretty great. I am excited to bring him to SNEWRU next weekend so people can see him. And speaking of NaMoPaiMo and my painting, in the past couple of weeks I have bought 3 micro mini resins and 3 stablemate scale resins. All with the intention of painting them myself. I think I am going to try to do one a month and give each the effort I gave my NaMoPaiMo project. That seems like a nice idea. And if I do that, I imagine I will get better at painting. 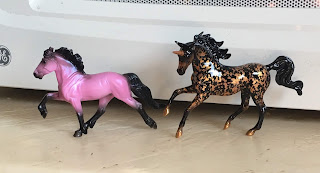 So I am not an OF collector but I have gotten really into the blind bag models. It's sort if like playing the lottery, but with horses. I have gotten lucky with them many times as well. My first time out I found the horses and no unicorns. But I did also get one of the pink Icelandic horses. The first time I finally found the unicorns I got a black and gold Magnolia. I was shocked and amazed! I am not usually that lucky! Today when I went to Walmart I found new boxes of both the horses and the unicorns. And I found another pink Icelandic and another black and gold Magnolia. I may start to prep some of the models and offer them for sale that way. I have a Magnolia I broke half the horn off that I should finish removing the horn from (she got dropped in the driveway when I was priming) and paint her as a regular horse. Could be fun. 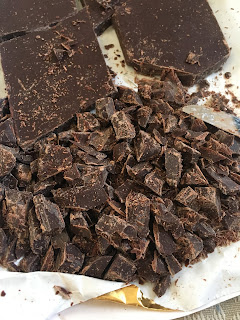 I decided I needed to try a Pinterest recipe because just pinning them does me no good at all. I chose the chocolate chip cookie dough fat bombs. They looked interesting and I had all the ingredients. When I was casting helmets this morning I took out the cream cheese and butter to soften. The problem I ran into was when I went to actually make them. The recipe calls for Lily's chocolate chips, which "of course I have". Except that I don't. When I started the weight loss competition I sent them all to school with Travis, along with my almond and coconut flour. He makes mug muffins with his para and sometimes pancakes. So I didn't actually have any chocolate. I had one bar of Lily's semi-sweet baking chocolate left so I spent some good quality time with a paring knife chopping up that bar of chocolate. And I managed not to eat any, even though I really wanted to. 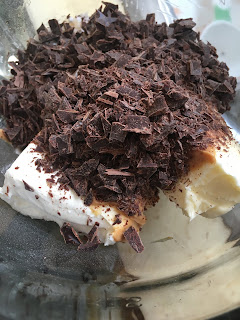 Other than needing to chop up chocolate everything went well. The recipe says you should cream the ingredients together with a mixer. I figured if I did this I would lose a ton of the mixture just for the fact that I couldn't get it off the blades. So I just creamed it together with a silicone spatula. It took a few minutes but it was not hard and it worked perfectly fine. The recipe also says it makes 20 fat bombs but I tweaked it a tiny bit and made 24 out of it. I did it so they would each be a bit lower in calories so I could fit them into my macros more often. 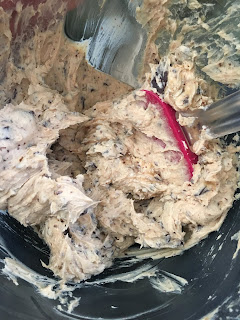 And speaking of the macros, here is the breakdown. 119 calories, 2 carbs, 11 grams of fat, 2 grams of protein and 67 grams of sodium. I put the recipe in My Fitness Pal to get the stats on this. When I had it first set for 20 portions it was something like 147 calories each. I liked 119 better. 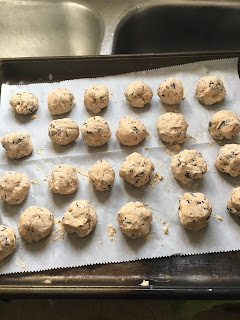 Another note on the recipe, I don't have a cookie scoop or whatever they actually used to make the nice scoops on the Pinterest post. So I used a spoon and spread them out on the parchment covered cookie sheet as instructed. I wanted them to look a bit neater and be able to tell they were about the same size so I rolled them into balls. First I wet my hands and that was enough to keep the dough from sticking to me. Then I stuck them in the freezer and right after they were done I had to go and pick Travis up.
A couple more things about the cookie dough fat bombs. They smell just like cookie dough. They taste sort of like cookie dough but they have a hint of cream cheese in the flavor. Even though they have peanut butter in them (you can use other nut butters as well but that would change the stats) they don't taste like peanut butter at all. They are a tiny bit sweat, but not overpowering. I have had NO sugar in a very long time and no alternative sweeteners at all in 7 weeks. People who are new to keto might think they are not sweet at all, I am not sure. I think they were very good. A nice little treat to end my day. I will totally make these again. 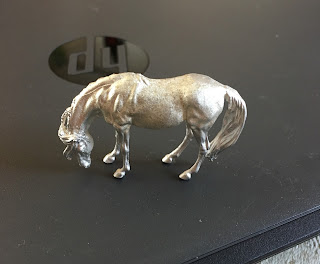 The last thing I wanted to mention was the pewter Kaladin I bought arrived today. I love this horse. I figured he would be the first to get painted since he arrived first. I am thinking dark bay. As usual, I have no idea where to start. Seriously. I have never painted a bay horse. I don't know what color to do for a base coat. So I will need to work that out. And I need to get him prepped. Even though I'm really good at prepping I don't much like prepping. Not anymore. I have done a ton of it on some incredibly difficult horses. Which is why I am good at it but also why I am burnt out on it. Anyway, maybe I will wait for some of the other horses I bought to show up and have a prepping session with several. When we get some nice weather.
Tomorrow is March 1st which means it is 29 days to my birthday. I'm still not 100% settled on which cake I want to make or what food I want to eat. But I have some time still to work that out. Maybe I will go check out Pinterest and see if I can figure out why I bought the chicken. Hopefully I can try another new recipe soon so I can share it will you.
Posted by Field of Dolls Studio at 5:30 PM