NaMoPaiMo and what I’ve been up to.

As many as many people in the model horse hobby know, February is NaMoPaiMo. I am not a great painter by any stretch of the imagination. But I find it incredibly interesting to paint “with” hundreds of people from all over the world. This year’s I decided to paint my Maggie Bennett micro mini, Hugh. My skill levels dictates that I should not be painting resin horses. 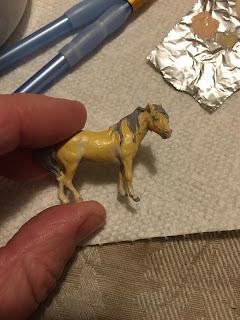 Though Hugh is not coming out too horribly. Give me time, maybe I can mess him up more. I am hoping to tone down the orange tint in his palomino coat. I heard of a trick hat I need to try when I have some time. And when it’s not snowing. 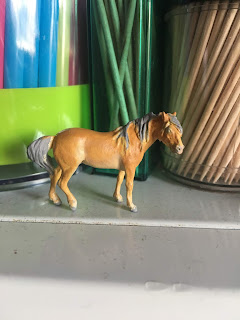 Togo along with my skill level I am also working on a Stablemate. This will be a rainbow Albicorn with gold and bling. Because it seemed like a fun idea. And because bling. 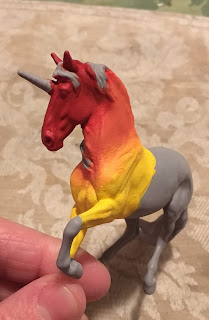 In other news, I have been actively working on losing weight since the end of last March. So far I have lost a total of 44 pounds and 5 weeks ago I entered a weight loss competition at school. I am hoping to win it but I lost 37 pounds before the competition started so we’ll see what happens. 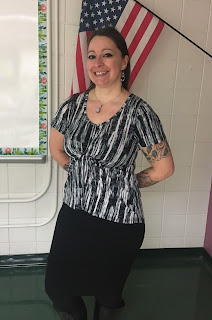 recently I finally got around to designing some easy on/off skid boots. They have been on my to-do list for months. They are a very easy to use design and I really love how they turned out. I also finally have a design for open front jumping boots. I have been hoping to add those to my line-up for awhile as well. I’ve been making splint boots and fetlock boots for awhile so it was time to expand. 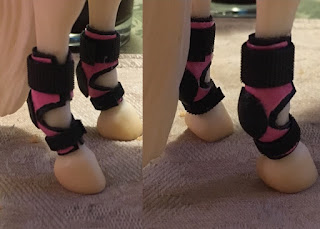 I have made four or five upper level dressage dolls just since the beginning of the year. They are incredibly popular at the moment for some reason. They are fun to make so I don’t mind. 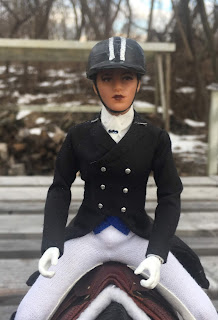 I’ve made a couple of casual English dolls. One with a removable winter vest. That would be useful for the weather we are having today. We have not gotten all that much snow this year but it is snowing today. I am not a fan of snow. 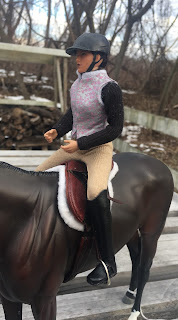 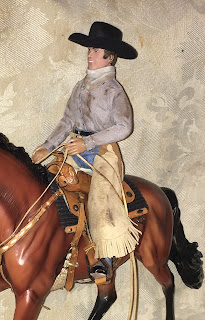 In general I have been working fairly steadily his year. Much more than in past years. I usually get pretty draining seasonal depression and am not all that productive in the winter. This year I have a lot more energy than I usually do. Which may very well be the fact that I am eating better and working out and in general moving more.but whatever it is I have been managing to get a lot done. I am working on having a stock of dolls set aside that will hopefully be able to hitch a ride with someone to get sold during Breyerfest. One of these years I will get to be there myself. This is not that year.
So that is what has been going on with me recently. Still working at the school, making lots of dolls and working some on my NaMoPaiMo horses. The unified track season will start soon and I will have a lot less time for dolls. But it will be fun, it always is. Maybe I will even learn to post to ge blog more. No promises! But I am going to try. Again. I don’t really do New Year’s resolutions but I did decide that I was going to focus on 3 things this year. Saving more and spending less, losing more weight (so eating well and exercising) and being more positive. I can’t control all the things that happen around me, but I can try to work on how I react to them. Most days my plans are going very well.

Great post! So glad to get all this news, and Congratulations! I love the 'dirty' cowboys idea.

You look great and your pony looks great! Love all the positive energy!