I have been doing low carb eating for almost a year now. I think in another couple of weeks it will officially be a year. Sometimes I will have something that is not low carb but it is rare. I have tried, and failed, to lose weight since my kids were born. I spent a lot of time frustrated. But low carb is working for me. I have been doing full keto for the past 7 weeks. I just also completed week 7 of T25 workouts. Keto and T25 got me out of a 2 month stall I was stuck in. Yesterday I just felt great. I asked my friend Jenn to take this picture for me. I said if I ever say something foolish like "I'm fat" smack me and tell me to look at the picture. I am still not as fit as I would like to be and I am only just barely out of the danger zone (measurement-wise) for a variety of health issues so I have more work to do. But this is encouraging. And I feel wonderful. 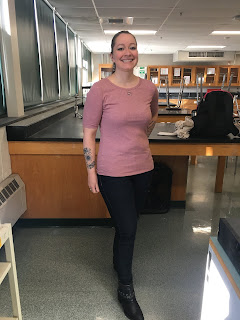 I've mentioned so many times now that keto is not a boring way to eat. And it absolutely is not. When I started I did go a bit boring to try to keep everything as pure as possible for maximum weight loss. That worked a bit but soon became frustrating. I am not going to eat all sorts of bread and treat replacements all the time, but I am putting them back into my meals here and there. I also like to try to get a variety of things for Travis to eat. 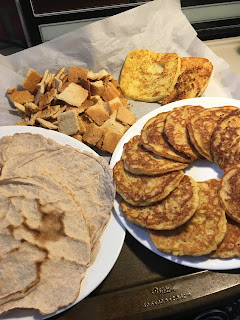 This morning I went a little crazy and I had a list of things I wanted to try. I have been spending way too much time on Pinterest so I really need to justify that. On the bottom left are the coconut wraps that I talk about here. The link to the recipe is also at the bottom.
Bottom right in the photo are the pork rind pancakes (the recipe is at the bottom of the linked post). I made them in a non-stick pan today and what a difference! I doubled the recipe and thinned the batter a tiny bit (a little more than an extra 1/8 cup of water) and I used 1/4 cup of batter per pancake and spread it a tiny bit when I poured it into the pan. The came out very uniform and puffed up nicely. Also without using extra grease to cook them in they are just slightly less greasy. I have not eaten one yet but they look really great.
Top left of the photo are Keto butter crackers. These were a recent Pinterest find and I was excited to try out a new cracker recipe. They have a ton of calories (they are made with almond flour AND a lot of butter) so I will not be eating many of them, or very often, but they are good. They taste a bit like a club cracker, which is my favorite cracker ever. They are definitely flakier than club crackers and are a bit brittle and crumbly. But they sure are good.
The top right is another Pinterest find, 90 second microwave bread. I have made mug cakes before, and they are interesting, though the best part is they are fast. I have seen several different recipes for 90 second bread and this one looked decent. Again, packed full of calories because it is made from almond flour. But it also has a ton of fat, which as anyone on keto knows, is a good thing. What you do is you mix up your ingredients, put them in a flat bottom bowl or, like me, in a square microwave safe tupperware, and you microwave it for 90 seconds. Then cut it in half and you have two slices of bread. I recommend before you cook your bread to drop the container on the counter a few times to try to get out any air bubbles. I must have had a huge bubble at the bottom of the batter, since I ended up with a pretty large hole in the bread once I cut it in half. I made it work. I do want to note that the bread does not come out of the microwave looking toasty like it does in the photo. I threw it in the non-stick frying pan for a couple of minutes. 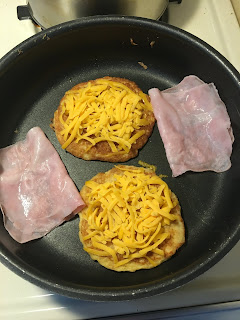 So I wanted to make grilled cheese, or really, grilled ham and cheese. I have not had a grilled cheese of any kind in a super long time and I miss them. I figured Travis would also like one so I made one for him with a couple of the pork rind pancakes. The above photo shows how I did it. I didn't have any sliced cheese so I used shredded cheddar. I heated up the slices of ham in the pan and then put a bit one one each half, then a bit of cheese in the middle and grilled the sandwich on each side for a few more seconds. I think it came out really well and looks like a grilled cheese sandwich for sure. Travis did not tell me how it was, though by his actions I'd say he should have waited a couple of minutes to eat it. (hot) 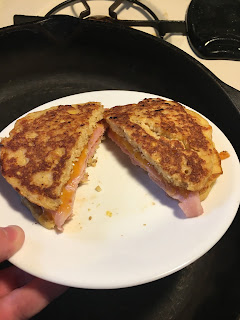 I used my 90 second bread to also make a grilled ham and cheese. I had to be a bit more careful with mine because of my macros but it worked out nicely. I used very thin pieces of swiss cheese and a bit of ham. I started with the already grilled side facing in and did the cheese on each half the same way I made Travis's sandwich.  I think I should always pre-grill the inside of the bread for a grilled cheese from now on! It makes for a very crispy, delicious sandwich! It was fantastic. I did try a bit of the bread by itself, but it was already grilled. So, it tasted like grilled bread. It was nice and I would likely make that again at some point. 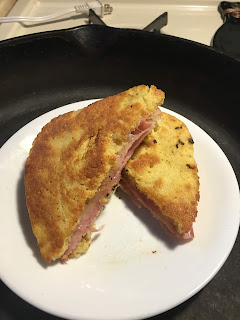 Lastly I want to share my new show plans! I was listening to the new episode of Mares in Black this morning and they mentioned Model Horse Place. Which is a fairly new website for model horse sales. It is sort of a combination ebay/etsy and I think there are offers and possibly trading...I am not completely sure. The Mares have mentioned it before and I went and signed up but hadn't done anything else with it. When I started searching for micro minis to add to my painting stash I did go there, but that was all really. Anyway, the Mares mentioned it and I went to check it out again and the first thing I saw was this western tack set. 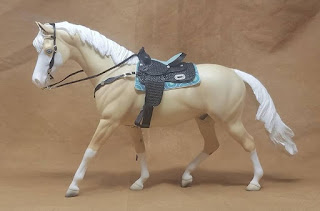 I have been looking for a western tack set that would fit Halestorm. This has actually been an ongoing goal for years. As soon as I saw this I snapped it up without any negotiating. I emailed Erika Ipes (the seller) to ask if she could possibly send it priority asap so I can hopefully have it for the show next weekend. Erika is awesome and she agreed and said I could use a photo to talk about it as well. So now I am going to go back into my show plan and alter things so I can show Halestorm in western performance as well as English performance. Now I need to try to make a western youth doll this week. I have done worse things to myself. I have an English youth doll that I don't love the way she came out. I think I can quickly repurpose her as a western doll. She can keep her short boots and her head and I can just make the rest of the doll. I am thinking just a very simple doll that would be sort of multipurpose. I just want simple black chaps and a simple white button down shirt. I think that will look nice I also know I can knock that out fairly quickly. So I think that will be the plan
I think I will also start moving my things from Etsy to Model Horse Place. Etsy is getting sneaky, weird and kind of greedy. The way they charge their fees seems a bit questionable recently. Plus there were some policy changes I am not super pleased with. Model Horse Place might just be the way to go. It certainly won't hurt to try it out.
So I now have new projects and Saturday is getting away from me. I should start working on the next Pinterest recipe (low carb chicken parm) and seeing if I can get started on my new doll. So much to do!
Posted by Field of Dolls Studio at 1:19 PM

Enjoying your blog, found it through researching painting/repainting Breyers. Also the fact you are doing Keto which I have considered... I have heard of showing the Breyers but I have no idea how so doing research on that. Also Etsy I was going to open an Etsy a while back, have been selling on Mercari various things including Breyers but have read some horror stories lately about Etsy. It is a shame. I use to blog alot but work got crazy and life in general so I stopped but I may take it up again. Glad to have found this, your face ups on the dolls look good.

Thank you for your comment!Depending on what sort of model showing you are interested in, there are a couple of ways to go about it. Are you thinking photo showing or live showing? Both are fun in different ways.
Keto has been very interesting and I am enjoying it quite a bit. I was doing low carb and sort of lazy for awhile but proper, tracked keto has been sort of fun, now that I have a better idea of how to do it. I plan on posting more recipes as I find them so feel free to come back often!