I knew This Would Happen

It's happened. What I was pretty sure would happen but was kind of hoping would not happen. I stopped posting daily, which has turned out to be an excellent life choice, and now posting is not really even on my radar. I am not stressing about what to talk about, or potentially forgetting to post, but now it is just so easy to not do it. So I may have to make the smallest of efforts to make a schedule for myself. But also be lenient if I miss a specific day of posting. All of this is a work in progress.
Like this western side saddle doll I could not talk myself into making. Western side saddle dolls are not the hardest dolls out there, for sure, but they also do take some extra work. These days I don't really want to work on dolls at all. I just don't have the space in my head for it. 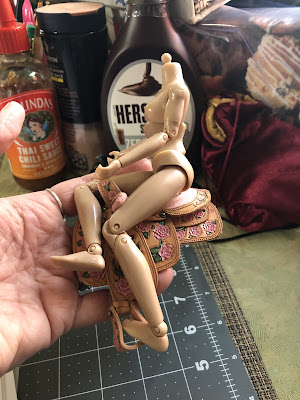 I still really enjoy when a doll comes together, but I have been struggling with mental and physical burnout. Even the good days at school leave me so drained that I can barely function when I get home. We are getting on to the end of the school year, there are just something like 20 days left (or maybe it's 20 days with students) and I am tired. Very very tired. 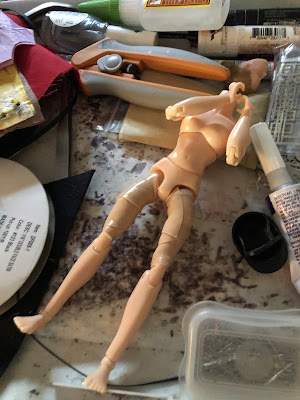 But last week I managed to talk myself into a bit of work. And it really was a struggle. But I got the thighs of an Yvonne-type doll remade so they are a teeny bit shorter and can more easily sit in a side saddle. I also got the clothes cut out, and then even managed the sewing. 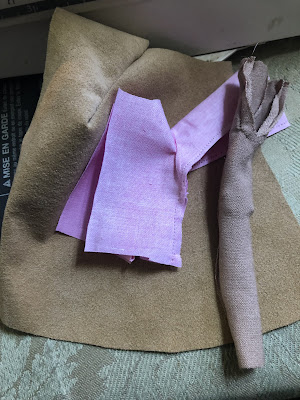 The last step I managed was to get most of the base outfit onto the doll. She still obviously needs a lot of work, but she is started and progress has been made. There is no reason a doll of this type should be 3 days in and still only at this point. But I guess some progress is better than no progress. Maybe I can get her done this week. Time will tell. 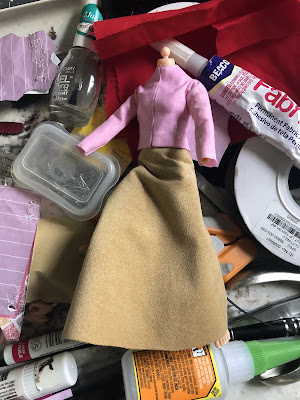 In non-doll news, the other night Ethan asked me if I wanted to go out and shoot. Since I have not done any archery since middle school (30 years for the curious), and he finally had a bow light enough for me to pull, I decided to give it a try. Since it has been so long he gave me a quick rundown of things I should do. I listed to all the things, watched him shoot, listened to all the other things and gave it a try. My shot was total garbage but Ethan said since I actually hit the target, it was not. And it was fun, just like I thought it would be. So I shot a bunch more. My second to last shot was super bad (but still in the target) so I said I had to try again because we can't end on such a bad note. But the bow, while I can pull it, is a bit heavy for me so I can't draw and take a whole lot of time to think about all of the places all of my parts need to be so everything comes together properly. And I am not anywhere near the muscle memory to just do it without thinking about it. But I tried just one more shot, the one in the photo below, and while it's not in the bullseye, it's pretty much where I was aiming, if just a bit low. I told Ethan I would fling pointed sticks with him again if he happened to get a bow that I could pull. Though I did say it should be super cheap since I am likely to not have much time to do it, or lose interest quickly. But it was fun, and different. 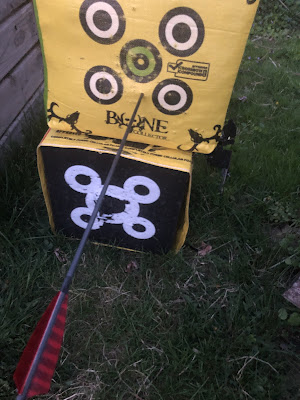 We have had some really excellent weather the last several days. Temps in the 80's with moderate humidity. Not the super low humidity I was hoping for (and excited for) but it was not too bad. Friday, Travis and I spent some time out in the yard barefoot. It was wonderful. We need more days like that. 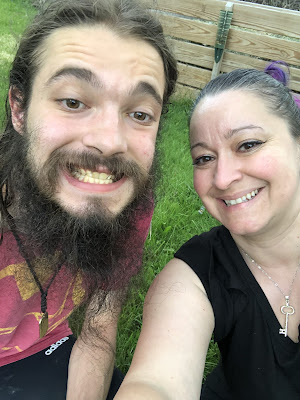 Yesterday, we decided to go out to the Brimfield flea market. I haven't been in awhile, and haven't seen Yvonne and Deb for a while. So Travis, Ethan, and I headed out there. Just like everything else, the cost to park has gone up. It really is cool that many of the people who live close to the flea market let people park on their lawns. Sure, they make some good money that way, but they also have to be out there to tell people where to park and so on. It is definitely work for them. I know there are places where people cringe at the idea of anyone parking on grass. In Massachusetts, we don't worry about that. The grass here is not delicate. Anyway, I appreciate that we can park fairly close to the flea market, near the end where Yvonne and Deb have their booth. I always stop in to see them first and then again as we are leaving. Yesterday, I was not looking for anything in particular, which makes it a lot harder to find, but Ethan was hunting for long bows and turkey calls. So I looked at things here and there, but mostly just walked with my guys. And walked and walked. I wasn't wearing my Fitbit so I have no idea how many miles we walked. I know it was 3 and a half hours, so even poking along that is a good amount of walking. My ankle feels the miles today. But it was fun. I didn't buy anything for myself, neither did Ethan, but Travis found a Batman that he had to have. He then carried it for the rest of our very long walk, and got several compliments from people on his Batman. It's funny to me the different attitudes of people in different places when it comes to someone who is different in any way. I always LOVED bringing the kids to carnivals when they were little. My experience has been, at least at the carnivals we attended, that all of the carnies were basically family, and they not only looked out for each other, but all the kids, especially kids with special needs. The flea market seems to have quite a lot of the same type of people. Seeing a grown man carrying a Batman, brought out pleasant comments. They told him he found a really good one. One guy was reminded of Batman from the 60's and started humming the theme song.
This weekend has been great. Lots of good weather, walking, being outside, and just generally a nice weekend. I am tired today, maybe from all the walking yesterday, maybe from the clouds and rain (because it was bound to rain again) but I am feeling good. Back to school tomorrow, MCAS Tuesday and Wednesday (meh) and closer and closer to the end of the year. Maybe then I will be able to shake some of this major mental fatigue and get back to proper doll making.
Posted by Field of Dolls Studio at 5:29 AM

Hey Anne!!
See how much fun you tend to have when you just do things spontaneously and because you want to do them??!! It's refreshing to read how you don't feel quite as much pressure! I'm *glad* for your sake!
As for the blog, I would stick to posting every few days if it helps!(Altho a schedule might not be a bad idea either!) Would having someone email you be helpful??
Also--try NOT to be so hard on yourself! Anything you do is better than nothing--so--relax a little bit! You know you'll get there! You *always* do!,

Hey Anne, I’m glad your doing better, I have found an approximately 1:20 scale articulated doll who I have been turning into a better rider for my Schleichs and I was wondering if you would like another guest post about it?
Emily

If your posts are less frequent, they are Not less interesting and relevant. In this case the post was Long as well. An improvement in my book!