Saturday was road trip day. Gabby, Travis and I headed to the Wrentham Outlets to walk and shop. Before we left I was putting the finished dolls away, finally, and remembered this lime green casual lady needed a belt. So she got one. 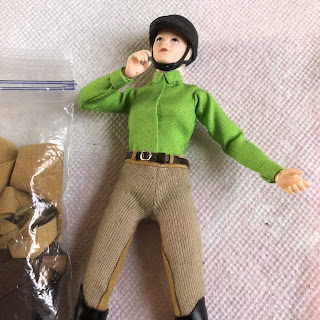 The weather was decent, which was good, since the Wrentham outlets are an outdoor mall. Sort of a convoluted strip mall. It could have been warmer, and I imagine it will be more fun when it is, but it was definitely a fun time. I completely forgot to take any photos for most of the day. I really kind of wanted to get a photo of Travis in the Gucci store. Though when I said that to Gabby she pointed out that the guards might have had a problem with that. She may be right.
So the first photo I ended up taking was of the Crocs with peeps on them. I hate Crocs, but Gabby wears them for work, so we went into the store. And I saw these creations. And they amused me. 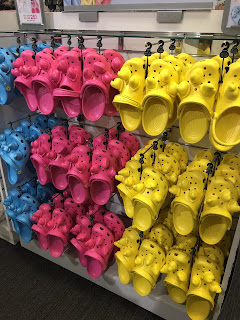 We ended up in the Converse store and I seriously considered buying these shoes. They were glitter pink, already discounted AND on clearance so like an extra 40% off. So they would have ended up being like $10. I would have bought them if they were not the most uncomfortable shoes I have ever put on my feet. I was a bit sad they turned out to be so awful. 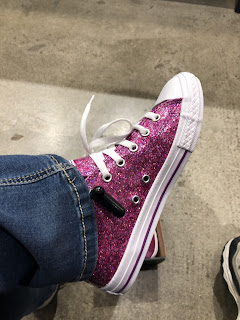 Gabby and I decided we wanted to check out the Steve Madden store, though we were pretty sure we were not going to buy anything.  I saw these fantastic pink snake print shoes, which I would totally wear, if it was not for the fact that they have insanely high heels and I have ankle issues so can't wear even fairly low heels anymore for more than a very short time. I kept staring at them (also on clearance for a really excellent price) but there is no point to me owning them. So I left them there too. 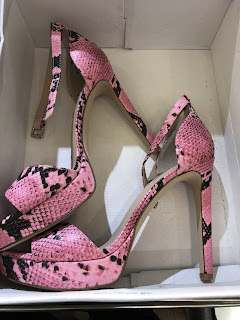 Gabby and I both agreed we would wear these obnoxious crystal covered boots if we would not fall on our faces and/or die from it. Gabby modeled this one boot for me, and nearly fell on her face while doing it. I hate pointy toe shoes buy these were really amazing in person. Obnoxious and amazing. 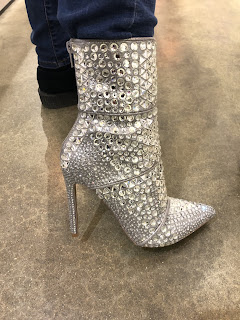 We did way more walking around than buying but did find some makeup items (super discounted!) on things we have actually been looking for. I got some no sugar added chocolate at the Lindt store, it was amazing, and Travis got a Hulk action figure from the Disney store. I won some stickers because I could answer their trivia question (the question was "what is the Hulk's real name" and I knew it was Bruce Banner).
It was a good day and the walking and chatting was more fun than any buying that we did. I held a $2,100 purse (in Gucci) and said if it was pink with crystals instead of purple I might be more tempted. I was not actually tempted, but it was funny anyway. I really enjoyed the outlet shopping and definitely want to have another trip like that in the future.

Posted by Field of Dolls Studio at 3:30 AM