Yesterday I shared a guest post from Emily Heckler. She talked about working on Schleich scale dolls, and the difficulties she had with them. I have been a doll maker for over 16 years. Which means I have a lot of practice. For most of that time I have worked in 1:9 (traditional) scale. It is my preferred scale, being small, but not so small that everything becomes extremely difficult. Not to say that making a doll in 1:9 scale is easier, but when you have over 1500 dolls of practice in the same size, switching sizes can be a huge challenge. Even with a ton of practice. The first challenge is getting anything to fit.
Most of my patterns are for traditional scale dolls. Over the years I have drafted all sorts of new patterns for that scale, used different pieces together to make new articles of clothing, and it is not really a scary scale to work in for me. One of the nicest doll making compliments I ever received was from my mother (who has a ridiculous amount of sewing practice and has even been to tailoring school) who said she couldn't do what I do, Barbie is small enough. I think Barbie is HUGE. But again, I have been working in my preferred scale for a very long time.
That doesn't mean that I am unwilling to work in other scales. Every once in a while I will. Like in these blog posts. Teeny Tiny Huntseat Doll, Western lead-line, Ask and you Shall (maybe) Receive.  Micro. I also made a pair of stablemate scale dolls but have searched for about 45 minutes and can't think of the correct keywords to find the post about them. And really there may NOT be a post about them. I was not always very good about posting. Anyway, recently a friend of mine asked if I would be into attempting to dress a couple of 1:12 scale dolls. These are not what Breyer pretends are 1:12 scale dolls, these are actually 1:12 scale dolls. The ones she sent to me were the really cool TB League dolls. The ones that have steel skeletons (and I REALLY want to cut one open and see it!) that bend totally correctly. They also have "skin" that is cool, but makes them hard to dress. I also don't actually have any patterns for true 1:12 scale dolls. Which means I grabbed the patterns I had, that I thought would fit reasonably well, and then I spent a lot of time doing alterations until I had something that fit properly. 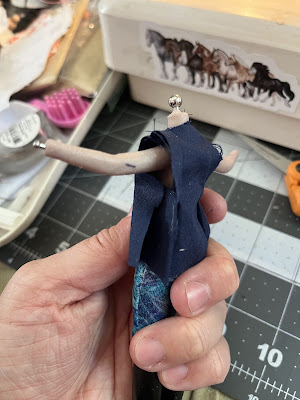 I have said, on many occasions, that my job is not always easy. And it's not. Sometimes it is, because I have A LOT of practice. But sometimes I get an unusual doll. And then, sometimes I get typical dolls in an unusual scale. I really wish I put these ladies with a traditional scale Yvonne for comparison. They are small. Very small. And for dolls that claim to have a medium sized bust... well, I would hate to see what the large looks like. Basically I took a couple of dolls shaped like Jessica Rabbit and dressed them in English riding clothes. The casual English doll should have been a fairly simple doll. She was not. Not only did her clothes need a lot of alteration to fit properly, trying to get anything that resembled a helmet that would fit on her tiny head was a whole new adventure. And really, I think their heads are a little bit undersized for the bodies. The hunt seat doll was a different set of challenges. I already had it down roughly how to make the breeches so they would fit (got these on the first shot!), hunt dolls have sleeveless shirts under their coats, so that was not too hard, and then the coat... was actually tricky. There was a lot of fitting, taking in a seam a bit more, fitting again, adjusting and trimming. Even with "easy" dolls, changing the scale can be incredibly challenging. 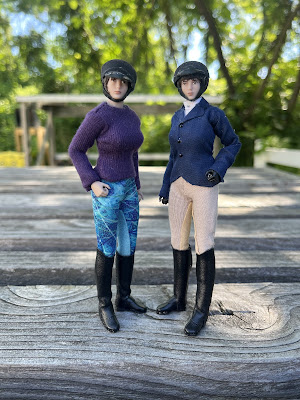 Did I enjoy making these tiny dolls? Sometimes. Sometimes they were really frustrating. Especially when I was nearly finished with the purple top and the giant boobs stretched the fabric and put runs in it. So I started over, switched the fabric, and was super careful. I don't love the helmets, but finding anything to fit the tiny heads was just beyond me. Would I make dolls in this scale for other people? Likely not. I made them for a friend who is an entirely reasonable person. I knew from the start, as did she, that they were unlikely to be prefect. I also really just don't like working in this scale. But they were an interesting, and different type of doll to make. Even if they were at the same time very typical, if that makes sense. To wrap up, even with a lot of practice sometimes making tiny things is super challenging.

Posted by Field of Dolls Studio at 1:30 AM

Interesting and challenging is good. I think variations are the very heart of collecting. I laughed out loud at your purple sweater problems, (having recently tried and mostly failed to fit a bra to myself). I guess that's what happens when you make miniatures by covering surfaces. Fitting a removable coat to that doll would've been a whole different challenge.