For the past several years Kyle Parks has sculpted a medallion specifically to benefit NaMoPaiMo. Some are awarded as prizes and some are sent to artists to paint and then sold to support NaMoPaiMo. The first Michelangelo medallion finished this year was done by Amanda Brock and is currently up for offers on MH$P. His ad is here. This medallion is gorgeous even unpainted, but the finish work on this one is absolutely stunning! 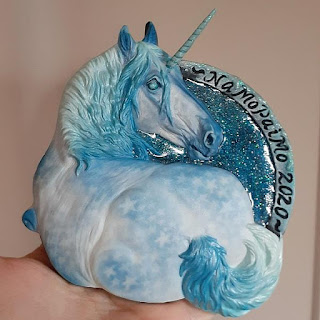 I put my hair up yesterday, which I don't do often unless it's hot and humid out. But yesterday was a hair up kind of day and I put it up in a messy bun. A messy bun that happened to look like a bow, had the blues and the purples separated onto each side and looked like I actually spent time doing this on purpose. Nope. Brushed it into a highish ponytail and wrapped a hair tie around it a few times, and added some hair spray. And this is what I ended up with. And it amused me. 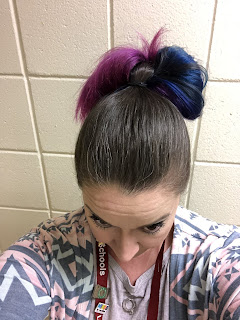 Other things that amused me were my friend Jenn's collection of science plushies. She had this super cute double helix on her front counter. She also owns a heart, a paramecium and I think a synapse. She has to explain to the kids all the time that these things don't actually have eyes in real life. Anyway, they are incredibly cute and I had to share! 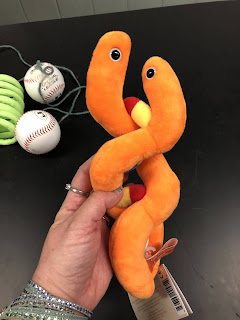 Sue has commented a couple of times that I must spend a significant amount of time writing every day to be able to keep up the blog. The reality is, I do not. If I have to do research for a post they will definitely take longer. But for the most part I try to get fun photos throughout the day and I think about what I can talk about that is not mind numbingly boring. Some posts get thought out around photos I have taken, or around a basic idea. A lot of posts get written ahead of time. I have, a few times, had posts scheduled 3 days in advance. I write them as if it was written the day I post them. For example, the post I put up on the 20th, which was my Mom's birthday, said "today is my Mom's birthday" and so on. I actually wrote that on the 17th or 18th though. So I write in the future. Or from the past, either way you want to look at it.
I do talk a lot about a lot of different parts of my life. You hear about doll work and horse shows, plans for my live sales, stuff about Travis and sometimes Elecktra, visits with Crystal and other friends. You know that I am a para and I work with a variety of kids with special needs. What you don't really hear are the stories that are specific to school. I can't share a lot of what happens throughout the day. Some things I can, in a sort of abstract way, but some things I can't. Some of the kids tell me stories that are horrifying at times and I wonder how they keep going. Today I spent about 20 minutes walking around with a student that was too upset by thoughts of past events to stay in class. Things like that are sometimes very hard to deal with. So are thoughts of what will happen to some of these kids out in the real world. And I can't talk about those things. There is actually a lot of stuff I don't talk about about my life in general. The blow-by-blow of my day would be pretty tedious to hear on most days!
Anyway, rambling and rambling, let me get to the point. Yesterday I meant to cut out two doll outfits. And guess what? I actually did it! I had a chunk of time left before supper and I thought about starting to put saddle bags together but that didn't happen. But I meant to cut out some doll clothes and I did. That makes me pretty happy. I have a casual western and western pleasure doll in the works. I think I even have a head already haired for at least one of them. Bodies are prepped and waiting... so progress is being made on DOLLS! Not just accessories but actual dolls. 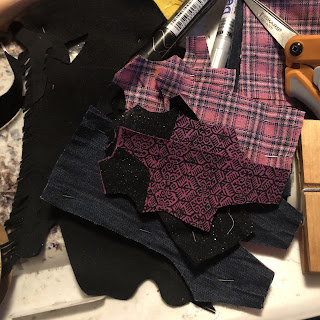 I did not do a whole lot of work, but I did set out to cut out some doll clothes yesterday and I did. Mission accomplished. Today in the laundromat I can listen to Mares in Black and work on saddle bags. Maybe I can sew and start dressing dolls tomorrow.

For reference, this post took me about 25 minutes to write. I had the photos already in the post, it took only seconds to put them in the correct order and I had a few vague ideas of what I wanted to say. And then I just started babbling, lol. :)
Posted by Field of Dolls Studio at 2:30 AM

I am sympathetic to what you wrote about some students and their horrific home lives. How we worry about them and what happens when they leave school. It warmed my heart to read that you spent time walking with that student as they worked through an issue. No doubt you made a difference for him or her.

Lynn,I checked in with them this morning and they had a much better afternoon and night. All is well this morning. It's a constant struggle to care about these kids in a semi-detached way.

I'm so glad to hear that! And yes, it is a struggle. I'm so glad they have you to help them through their ups and downs. :)