The other day I got this really cool photo from Fabian of his Spanish side saddle doll. I really like this. Once he has his proper Spanish side saddle in hand I am sure we will get some new photos. For now, this is a lot better than what I could do with a western saddle. I love it so much! 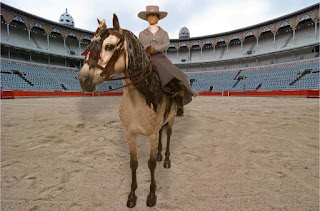 I also made some more progress on the cross country kits! I decided this time around to do the numbers with iron on material. So I printed a bunch of them, though as usual it took me forever to remember how to flip the imagine, since you have to print them backwards so when you iron them on they come out correctly. But I got all of the numbers on all of the pinnies and all I have left of that step is to finish a few more straps and get the last few pinnies on the vests. This BIG step is so close to being done! I was also working on the stopwatches. After I cut out the watch faces I glue them onto black cardstock and then I cut those out and glue them onto a strip of ribbon. So far I only have the watch faces glued on the cardstock, but it's a step! I need to finish those and do the medbands and then package all the kits up and everything will be done. And I am really looking forward to that. 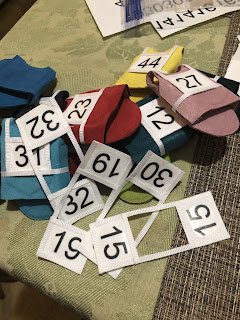 I had planned on finishing up the vests, but then I ended up doing a lot less work than I probably could have. So they are not done. Soon I will finish them up and cut out some doll clothes. I do need to start working on some dolls soon.