You all know by now that there are days that I get almost nothing done. Sometimes it's through lack of motivation, sometimes it's through lack of effort, and sometimes it just seems there are not enough hours in the day. But there are some days where I am really productive. I love days like that! Friday started out looking like a day where I would not get much done. It was early release (we have those once a month on professional development days) and the morning was spent running from one short class to another. I spent a bunch of time modifying a test and making a study guide for one of my kids for the midterm. That is not actually my job, but I want him to do well. His mom will help him study if she knows what he needs to work on. And no matter how low, I don't write anyone off. He is totally teachable. It just takes more work. I think making the study guide was well worth the time. Plus the "study guide" is also consolidating the notes he will need to bring for his exam. Which will make helping him through the test much easier for me. Win-win. 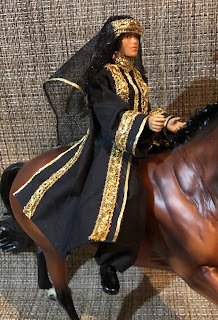 I had grand plans of doll work when I got home but I was attacked by a nap! And it was one of those sneaky naps that wants to be more than twice as long as you were willing for it to be. So I did waste close to an hour napping and trying to stop napping. But I did take a half day (Travis had midterms so he had a half day) and I had extra time. After my nap I cleaned my makeup brushes. Again. I have discovered that the issue with using really good pigments is the need to clean the brushes daily. No more wiping them off and just doing the cleaning once a week. For anyone that is curious I use the Ulta Beauty brush cleaning solid soap. Which is very easy to use, is incredibly effective and doesn't stink! So many brush cleaners smell horrible or super perfumy. This has no smell. Fabian was wondering if it would be good for pastel brushes. I have not tried it, but it works really well on makeup so I think it would be great for pastel brushes. 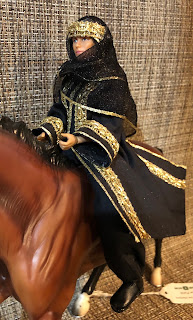 Anyway, as you mighty have guessed by looking at the photos, I did manage to get into some doll work. I had a few struggly moments but I managed to finish up the Arabian rider I started dressing. I really like how she came out. The black and gold is just so elegant! Her veil can also be styled in a couple of ways, as the photos show. 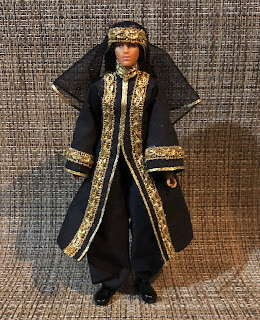 I still had a decent chunk of time before supper when I finished the Arabian rider, so I decided to get into dressing the formal saddle seat doll. I am so glad that I have a bunch of bodies prepped and heads haired! It's also convenient that I had the clothes for the saddle seat doll sewn. The sewing of a saddle seat or hunt seat coat take a lot longer than sewing almost any other piece of doll clothing. I took extra time on this one to make sure I didn't have to fiddle around with fit when I got to dressing the doll. 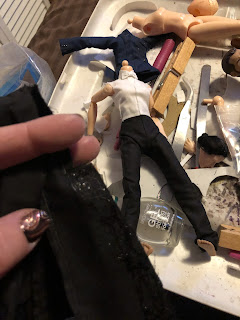 It doesn't show much in the photo, but her coat is a really excellent fit. I got a good amount of work done on her and am down to boots, gloves, face and hat. So she won't take too much more time to finish. That should be an easy win when I get back into working on her. 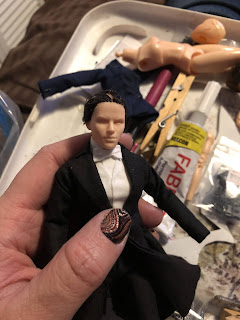 For anyone curious about my nails, these are the Color Street nail strips. These are the ones I ordered from Elecktra's aunt's online party way back in December that USPS lost somewhere. I contacted the consultant and asked if the company ever replaces lost product (I think I mentioned this before) and she went and found out and they sent me out my nail strips! I was afraid that the fabritac, which has acetone in it, would ruin the nails, which it has done to other nail strips in the past as well as regular nail polish. As a precaution I put on a UV gel topcoat and got glue all over my nails (of course) and they are fine! So I am super excited because not only are the Color Street strips super easy to use, they also come in really cute designs. Things that are fun, and also easy to use, make me happy.
I am not sure what I have after the saddle seat doll. Maybe a western pleasure doll, I haven't decided yet. I do also still need to finish up the color wheel of cross country vests. Only 10 weeks until my live sale! I need to get moving!
Posted by Field of Dolls Studio at 2:30 AM

I like that phrase, "struggly bits." And it's refreshing to be reminded how important brush cleaning is. I use plain soap,... thanks for the updated info.

I use plain soap to clean my beauty blender (sponge egg thing). It seems to work perfectly fine. Though the solid soap brush cleaner takes out even purple and blue pigments. Those often will stain a brush, but so far I have almost no staining. The egg is a bit stained though. Maybe I will try cleaning that with the solid soap.