I Can Work Anywhere

As long as it's not windy or precipitating, I can pretty much work on dolls anywhere. I think this started because Liesl Dalpe and I used to have a studio day together about once a week for awhile, years ago. I would put my doll projects in the car and drive down to her studio and we would visit and work and it was great. I have worked in a lot of places. I work in my house of course, sometimes sitting at the kitchen table, but too much of that hurts my back. So I mostly work sitting on my bed and working on the flipped over box top, using it as a lap table. I have worked outside at my picnic table, at my mom's house, at my friend Angelique's house, at Maire's house and at the laundromat. I have done a lot of work at the laundromat. But these days we are taking extra precautions and I don't hang around at the laundromat. I put the stuff in, set a timer on my phone and usually go and do errands or just go for a drive. But Monday I decided to work on dolls. I know, Monday is NOT laundry day. But the weather was crap for house work, laundry needed to happen, and it seemed the adult thing to do would be to go and do the laundry. So I packed up all the clothes and my doll supplies and went to the laundromat.
A box top-tray full of my current project (and random crap that always lives on the tray) is not unusual to see in my photos. But the steering wheel is. I put the seat back a bit, put on some music and got into finishing the hunt seat doll I was working on. 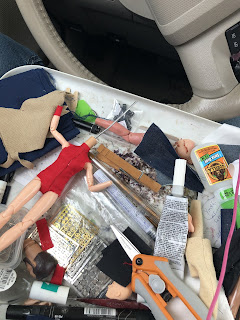 I have a few plastic storage drawers full of doll bodies and doll making supplies, but the most used items, and some other random things, are stored in the doll box. I almost never put the cover on it properly since it acts as a tray. Stuff to make boots, crystals, leather and a variety of other things are in the pink handled tote bag. As long as I have clothes sewn and prepped doll bodies, the doll box and the pink tote bag have everything I need to make a doll. It's pretty convenient. I would love to have a studio where I can leave my mess out and just close the door, but having it this way makes my doll making extremely mobile. 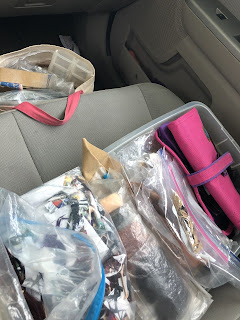 I had a lot already prepped, and laundry takes a while, so I got a good amount done sitting in my car at the laundromat. I had a variety of music on but the majority was Disney songs. So I worked on the doll and sang. In my car. In a public parking lot. Once in awhile I would remember I was singing in my car, with the window open, and I would wonder if anyone was watching me. But I was in the zone most of the time and really didn't care. It was an excellent use of my time and I was really happy about it. 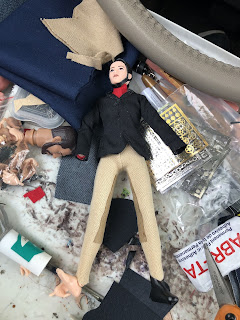 I got home and folded laundry mountain, which took an incredibly long time, and I put everything away. Near the end of what felt like endless folding I was thinking that would be all I would do for the day. But I have a schedule to keep and this hunt seat doll was so close to being finished. I baked up some helmets, got her gloves painted, her boots finished and put buttons on her coat. It felt really good to have her done. 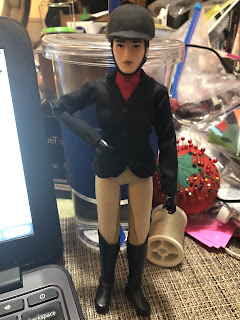 I could have finished right there and been satisfied, I think, but I wanted to get some clothes cut out and sewn so I would have things I could work on while Travis is doing some school stuff. I don't know when we need to get back into the house work, probably tomorrow, but I don't know what time, how long, etc. And I have a schedule to keep. So I cut out 4 doll outfits and I cut out a bunch of mask parts too. After supper I got out the sewing machine, watched YouTube videos and got the sewing done. I was feeling pretty accomplished. And one of the 3 dolls I need to do for the week is done! I just need to get 2 more finished and 8 sets of saddlebags. I wonder if it will happen.
Posted by Field of Dolls Studio at 2:30 AM

Ha Ha! That is like my work space. I have so much clutter that my tack box cover won't even fit on!

I have made some memorable pieces of tack while sitting in the driver's seat,...in the rain,...in a parking lot in a New Jersey amusement park. It was closed for the season. As birdwatchers we discovered closed amusement beach parks were really good for eiders and other rare ducks.