Last week I did a post about some of my tack collection. I couldn't include my parade tack because the set lives in a box, in a tote, at the bottom of a stack in the closet. I forgot that I have show photos. Silly me.
My parade set was a custom order from Wendy Ward of Two Horns Bar Custom Saddle Works. Most parade tack I have seen is black, but I have seen some brown sets and I have always loved them. 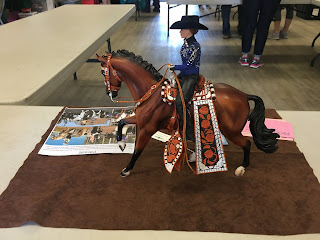 I knew I wanted a brown set and I wanted a set with roses, which are my favorite flower. Wendy totally came through! 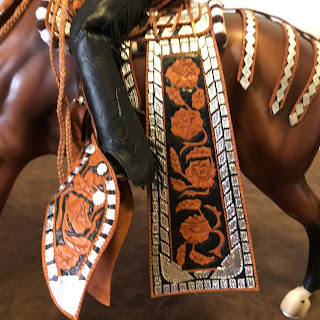 The detail on this set is amazing. 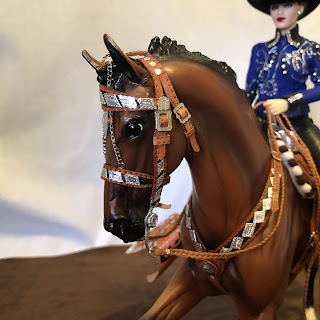 This set was made to fit a Matriarch, who apparently has a slightly longer back than most of my other models. I actually played around with this to make it fit. The buckle is actually stuck down over the strap end, instead of the strap end being through the buckle. This wouldn't work in a live show with a super attentive judge. But it works to take a picture of this set on this horse. 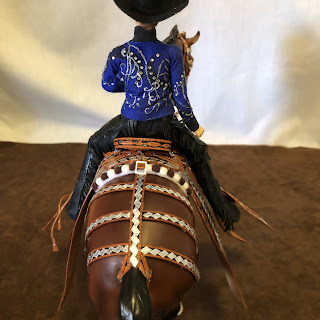 I used to have a parade doll that I used with this set, but then someone wanted one exactly like mine. So I sold them mine. I think a doll dressed in cream would look good with this set, but I haven't decided yet. Or done it. I'll have to think on that and make it happen! 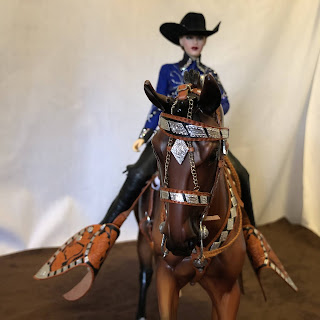 I have been having fun sharing pieces from my tack collection. What else should I share?

Blue is good on bays, isn't it? But cream with warm colors, like orange, red and green, would look great on your horse.
Wendy Ward (Two Horns Bar) is pretty good, and I wish I had a set of hers!