I thought about writing this post and just pushing it off until after the scheduled ones posts (I think I have 3 currently written and scheduled) but I decided this should just happen right now. Partially because I am avoiding doing things (not true, I did a bunch of stuff, can I be done now?) and partially because Kate Springer is awesome. Just gonna throw that out there.
I love micro mini horses. I love miniatures in general, but the smaller the better. But I also love extremely detailed. That used to be what I looked for in any mini resin. I wanted ones that look like they could be traditional scale if you didn't know any better. And the recent micros definitely fit the bill. In February, during NaMoPaiMo, I also discovered I can do a nice paint job in micro scale. Which is fairly amazing to me since people that have known me a long time know that I can't paint. Or to correct myself, I am not a good painter. I can totally slap paint on an object, horse shaped or otherwise. Anyway, I really surprised myself with my Hugh mico during NaMoPaiMo and then I went out and started acquiring more minis, not all of them micro. So far though I have just painted micros this year, nothing bigger. But I have managed to finish these 3 and I am really pleased with all of them. And a little amazed that I painted them. 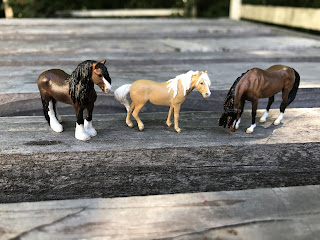 So apparently I can paint a micro mini but what I have never done is make a micro mini Arabian costume. I asked on my studio page the other day if I should make another stablemate scale Arabian costume, because I had found a picture of the most recent one I did and was curious if there was interest in that. Well, of course people think I should make another tiny Arabian costume and doll. Someone said I should do micro scale. What am I, a magician? Well of course I accepted the challenge and started hunting for an Arabian in micro scale because I don't have one.
And that is why Kate Springer is awesome. She gifted me this little Arabian for my project. Which also means now I really have to do it. 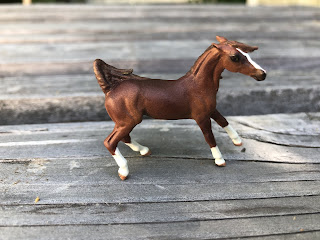 I was looking him over as I was taking these photos and thinking about just how tiny he is. And how difficult the details are going to be for an Arabian costume in this size. But actually, I am fairly certain I can do it and already have some plans on how to start. So in conclusion, micro minis are awesome, Kate Springer is awesome, and I am going to make a micro Arabian costume. With a doll of course. 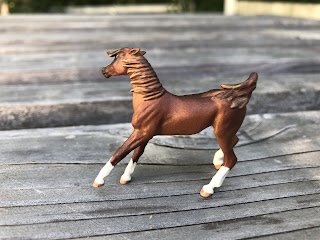 Posted by Field of Dolls Studio at 9:25 AM