The other day I said I was going to work on making a super fast chocolate cake in the microwave. I finally decided I needed to actually do it and see how it came out. I wanted super fast and super easy. I got easy, but not really super fast. But I was also experimenting, so that is a good excuse for how long it took. Anyway, the first thing I did was start my stopwatch. Then I started gathering the ingredients and pulling out pans and so on. I had nothing at all prepped or measured ahead of time. I used the mug cake recipe, doubled it for each layer and baked them individually. Which is another reason it took as long as it did. 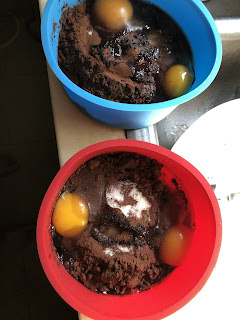 The first cake did not look like it was done so I put it in a little longer. And then a little longer. And then there was smoke. Oops. So I pulled the first cake out and stuck it under the exhaust fan on the stove and got the other one cooking. That one I put in for 3 minutes and it was fine. I could have maybe even just put it in for 2 minutes, or even the 90 seconds the original recipe called for. I don't know. Anyway, when the cakes were done baking I grabbed a screenshot of the stopwatch and then stopped the timer. Since it makes more sense to wait for the cake to be cool to frost it.

Well, as they were cooling, once in awhile I would go and look at them and then I started poking them. The first cake was rock hard. Poor abused cake. So I could not use it as a layer and decided to eat it. Well, I ate a bit, it has a really nice flavor (one part did taste slightly burnt) but it was just too substantial to eat and I tossed that one. Live and learn. And don't overcook the cakes. Anyway, I went off to do the laundry and figured I could frost the single layer when I got home.
The beauty of silicone baking pans is things come out of them very easily. Or at least this did. I whipped up the super easy frosting that I found the recipe for the other day and got the cake frosted. 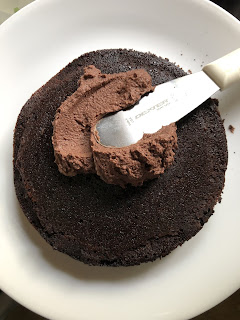 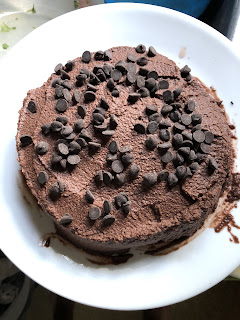 So in total, start to finish, this is the time it took to make this cake. With nothing out, prepped or measure ahead of time. With wasting a bunch of time burning a layer. I imagine if I did just 3 minutes of baking for each I could probably cut this down by 10 minutes. And if I didn't let the stopwatch run while I was licking frosting out of the bowl that would save some time. So yeah, I don't have the scientific evidence to prove this yet, but I think I could cut this down to about a 20-25 minute process. Not including cooling time on the cake(s).

So for anyone interested in trying out this particular cake here is the recipe, with my adjustments.

Yay! I need to show this to my Mom. She's on gluten free and no dairy.