The last division at Fun in the Sun was the Summer Fun division. These are the creative classes that have a very vague guideline that you can really have a lot of fun with. The first class in the division was Water Games: any game on horseback involving water. I could have done one of the games I already have that have someone carrying a glass of water, or moving water from one place to another, but I have these tiny Super Soaker guns, thanks to Jennifer's post about the World's Smallest toys. These toys are incredibly detailed miniatures of a wide variety of toys. And as I have mentioned, if you find 1:9 scale miniatures you have to buy them. Since Super Soakers come in all sizes, including very very large, I figured the two water guns I bought were about 1:9 scale. And awesome. I am also really proud of me for not buying ALL of the World's Smallest toys. Restraint.
So I had a vague note on my show plan about a horseback water fight. Then I thought about the real world and how ponies would very likely react if suddenly hit with bits of cold water from a bunch of screaming kids. Because who has a silent water fight? So shortly before the class went on the table I went back to an idea I had about target shooting. But I didn't have any pressure targets (like the kind in a dunk tank) so I had to figure out something else. I then thought about knocking over empty bottles, but I don't have empty bottles, I have bottles that look like they are full. Other than the little milk jugs. I got these years ago for using in some game, but I don't even remember what game and I am pretty sure I have never used them. Now was the time! So I put out some hay bales to make a shooting gallery and in my description it is something like "the riders race from the far end of the arena and dismount, handing their horse to a helper. They then choose a water gun and shoot at the empty milk jugs and knock over as many as they can in 30 seconds and then remount and race back to the start line". The judge liked it, and liked the differentness of it. I want to rework it. I like the idea. I like the set-up, it's cute and I can use a water gun and some milk jugs I have had for years. But to make the game better I think the riders need to race down and shoot at the empty milk jugs until they knock them all down, then race back. That way it is not just the riding that is timing their game, but each element. But I do like this and will potentially put it in as a game in a regular games class. Stranger things have happened. 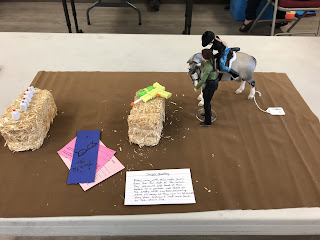 The next class was Dog Days of Summer: Make sure to include man's best friend. I again just had a vague note about having the pony out playing with the dogs. Originally it was even going to be Sweet but Psycho and not Lilith. But the only casual rider I have that fits a pony saddle is this one, who was already with Lilith. So we just kept going. I put out some Kinetic sand on my props box top and added a bunch of dogs and a few dog toys. It was not that interesting. Playing with Kinetic sand is though, so it was fun. Plus I made little dog paw prints all over it. 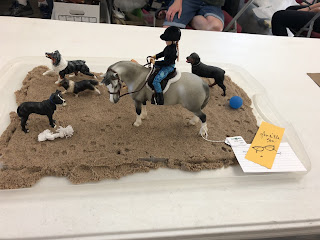 The next class was Sizzling Hot: Any entry that makes the judge think of summer. So I put together a cookout. And Mary (the name of every single rider in my documentation) and her pony were out riding and stopped at a neighborhood cookout. I really want to find a grill that is more in scale. I do know that grills come in all sizes. I don't know if any of the smaller travel grills are shaped the same as the larger grills. But this is what I have for now. 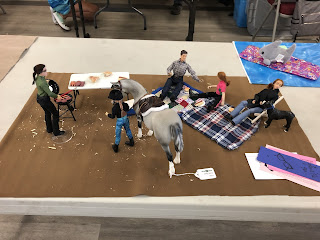 I made a bunch of raw hot dogs and hamburgers to make this cookout work. 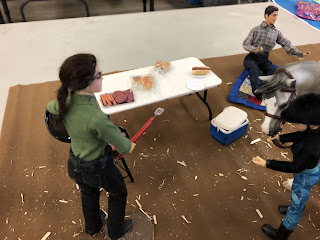 I also made bags of hotdog and hamburger buns and grabbed some paper plates I already had. I do love miniatures and cool miniature details. I grabbed the cooler out of my picnic table stuff, though I didn't end up using the picnic table because there was a lot more than regular cookout food (pizza and wings for instance). 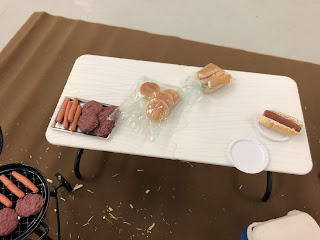 I put a longer handle on a 1:12 miniature spatula that was in with my polymer clay stuff. I used one of the 1:9 scale tables I got from Classic TV Toys. They have all sorts of cool 1:9 scale miniatures. 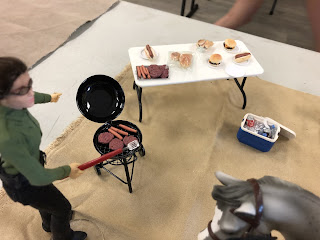 The quilt was a tiny one my Mom made for me years ago. I don't even remember what it was for, but I got to use it again. 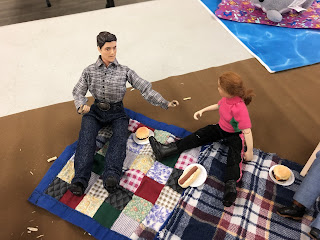 I did not do Costume, because I didn't have any beach, ocean or nautical themed costume, but I did so Scene: Any beach, ocean or nautical themed scene. I originally planned this to have Sweet by Psycho and the dogs in this. But the party took up a lot of space and Lilith was doing so well, I just kept putting her in. She is hit or miss in regular classes because her head is turned so far, but she is excellent in scenes! I reused the grill and table, with my Elecktra doll doing the grilling. I still had dolls sitting on blankets, but they were now sitting near a campfire (which flickered) roasting marshmallows. There is a bag of marshmallows next to the kid doll on the blanket. 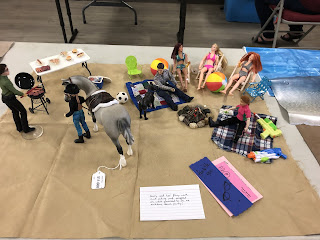 I have a bag of snacks next to one of the bikini dolls. 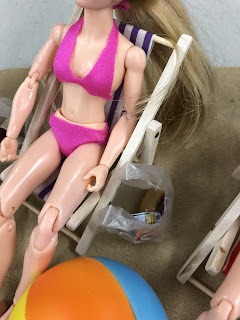 And there is a bag of booze next to another. 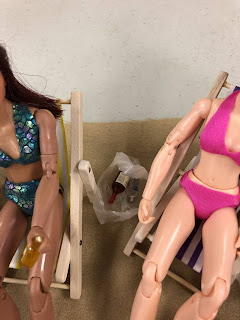 A couple of them have beers in hand. 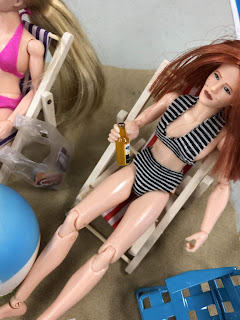 I made sure all of the bikini dolls were different. They have different faces and a couple of different skin tones. But really, I threw these dolls together on Thursday after I tacked up horses. I fully planned on taking the bikinis off and using the dolls for regular sales dolls. For right now though I have them in my tack room and maybe they might get used in another scene sometime. I currently have a large stock of dolls so I don't need these yet. 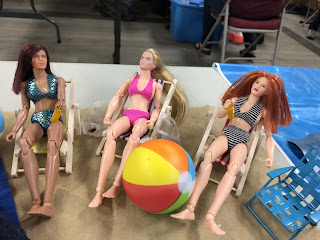 The beach party was a lot of fun to set up. I got to use a lot of little things I have collected but not had a use for yet. I used the beach balls and soccer ball I got from Carrie Sloan Meyer when I bought my horseball set. I had both of my miniature Super Soakers in there. Bags that I made for the motorcycle accident scene, beach chairs and other lawn chairs, the quilt my mom made. I even have a tiny Starbucks frozen drink. I wish it was Dunkin, but I can't seem to find those in miniature. 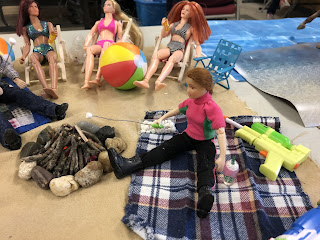 I got to use the cookout stuff agan and some marshmallows on sticks that I made. And of course tiny Abby. 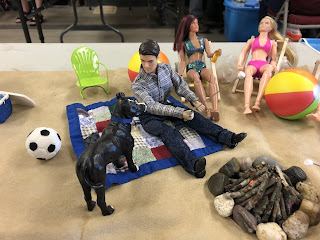 It was a really fun scene to put together. It had a lot of little details but I think I made everything work together so there was interactions in the scene. The bikini dolls are sort of having conversations. The kid is just roasting marshmallows, but she has the bag so she has to be sharing with the guy. Tiny Abby is realistically begging for marshmallows and the guy is either telling her no, or telling her it's not ready yet. Elecktra is grilling and the kid with her pony is stopped to talk. I really enjoyed setting this up.
In the end Lilith got 3 firsts and a third in the Summer Fun division. That earned her champion. 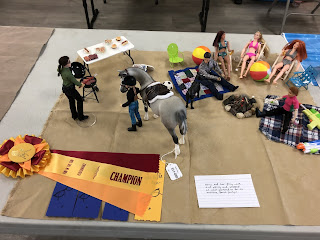 At the end of the day there was also an overall award for the performance division. Lilith got reserve overall champion and a cool rosette that looks like a sunflower and a frame that Stacylynn made. Fun in the Sun was a really cool show. I had a laid-back day showing in the regular classes, but no particular feeling one way or another if the entries did well or not. I had fun showing tiny Abby in as many classes as I could put her in (there will be a more detailed post about tiny Abby) and I remembered to take pictures of people! That almost never happens. That is up next! 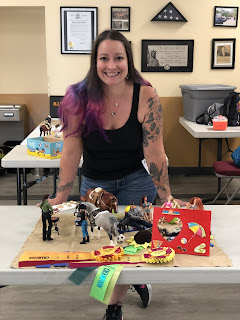 I really loved the cookout entry. Fantastic miniature quilt! And then to have it morph into the beach cookout!! Way to go!! The waterguns really add to it, not to mention all the food items. Marshmallows... So realistic!
So, is there such a thing as miniature sunglasses?

Yes! I have some for my motorcycle rider.