My sewing machine is still in the shop so I am working on anything that doesn't require me to sew anything. That meant hairing a whole bunch of heads and getting the faces painted...

And making lots of western boots. I still am not sure when I will get my machine back. Apparently it needs at least a new bobbin case. The repairwoman was out when I called so she could not tell me what is going on. Hopefully she will call me soon and give me a ballpark of when I can get my machine back. I really need it. 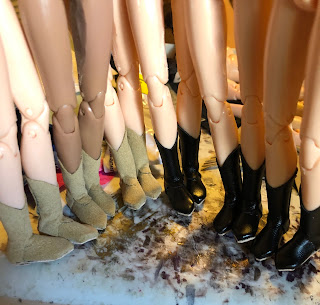 Since the micro mini Arabian costume was done it was time to work on the tiny doll. I could potentially have found a doll in the correct scale, but I would have most likely had to do a ridiculous amount of work to make it usable. So I started with a wire armature. 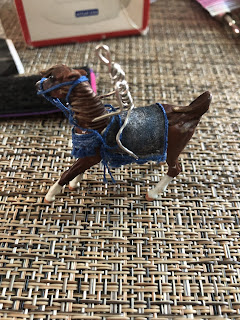 Then I fleshed it out with some medical tape. Absolutely there are probably nicer ways to do this, but it's a micro mini doll that is going to get fully covered with a variety of clothes. I just didn't care that much. 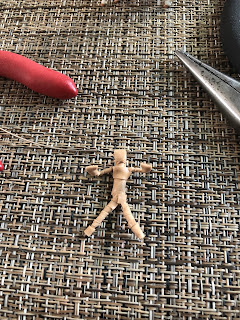 I got the pants and boots on and then just kept on going. Originally I was thinking this doll might take 2 days to finish up. But I managed to get her done all in one. The stirrups, saddle piece and final assembly happened as well. 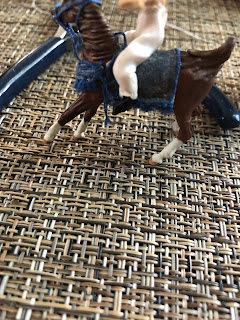 And I ended up with a micro mini Arabian costume with a doll. She is even holding the reins. 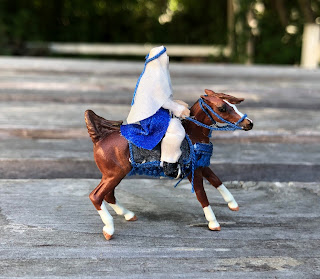 So the challenge was accepted and completed. In total, it took me 5 days to make this set. 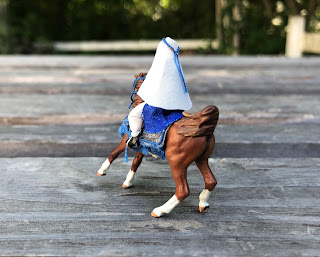 I didn't do super long stretches of work, the tiny tassels really did make me crazy. But there was usually at least a couple of hours. Maybe more, depends on the day. 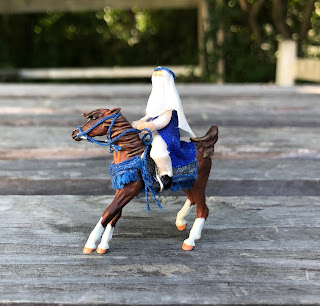 And voila! Teeny tiny micro scale Arabian costume and rider doll. I am most likely never doing this again. I am glad I did it, but parts of it were horrible. Seriously, those tassels are really small! 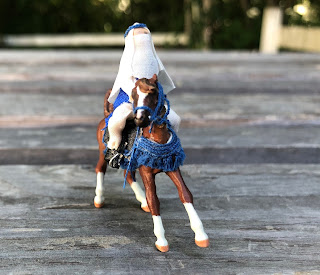 So I still might make another Arabian set in stablemate scale. But first I will have to find a stablemate scale horse. I sold my Jezebel years ago and I don't have anything to make a costume on. What is your favorite stablemate scale Arabian horse?
Posted by Field of Dolls Studio at 4:30 AM

A mini Nahar would be fab and a challenge

I love how the Micro costume and rider turned out! You did an amazing job on it and that color is prefect for him. Way better than anything I could have done.