Fun in the Sun Part 3 Other Performance and Western

The other performance division at Fun in the Sun was one I had several plans for that I just didn't bother with. I was planning on showing Day Drinker (my new Hal) in natural trail with the motorcycle accident setup, but I forgot to put it on the table until it was too late for me to care. Lilith went in with the bridge diorama I built forever ago. She is wearing tack made by Jennifer Buxton with a bridle customized (cut) by me. I made the little casual English doll specifically to fit this small saddle that I got From Marci. I can't seem to find the post where I talked about the doll build. Anyway, this was the first class of the day that I got to put tiny Abby in. Honestly, the creative classes and how many classes I could put tiny Abby in became my main focus of the day. 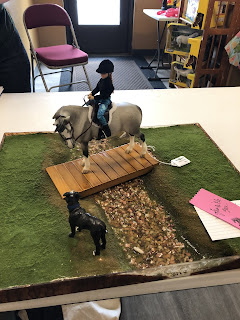 The only plan I had written down for the regular scene class was my picnic at the horse show entry. When I showed Lilith in this scene at Medieval Madness, the judge said it would have been better with the pony looking towards the fruit plate at the end of the table. So I made sure to position her that way this time. 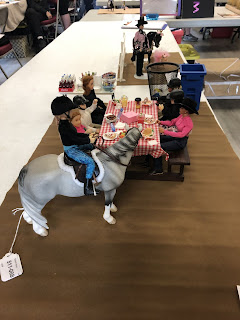 As fun as my entry is, it only got third. I am not sure what got first but second was snagged by Larry Nichols... 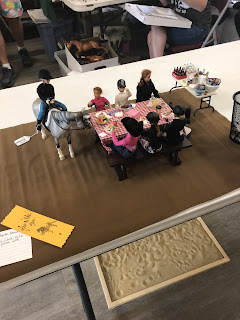 And his pig in a tutu. WITH proper documentation! How can some people having a picnic compete with that? 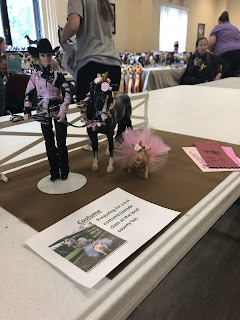 I decided to skip parade because I just didn't feel like putting Bring the Mayhem in the parade costume. I was not feeling tack changes yesterday. Which is also why I skipped putting Day Drinker in other costume. He would have had to change back for the western division. I just didn't want to deal with that. I almost skipped showmanship, but Lady Liberty (who technically is retired, even though she keeps coming out to show, came just to do showmanship. She was already wearing her halter (which was a gift from Fabian years ago and doesn't actually fit her properly, but does fit on Caramel Latte) and I do love showmanship. 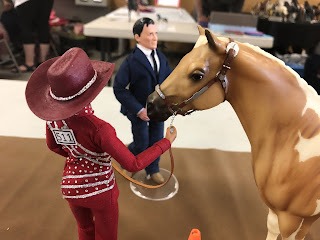 I was glad that I set up the entry, though the doll did not want to stand properly and I was not completely happy with how she ended up. Showmanship is a big deal to me after all. 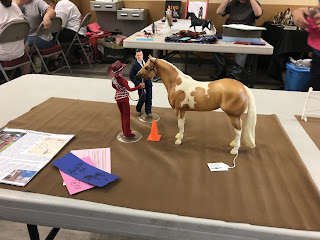 With only 3 entries in the whole division and only one of them qualifying for the callbacks, neither of my horses got champ or reserve in other performance. I didn't even put Lady Liberty on the table with her one ribbon. She was already packed and I didn't want to dig her out again. I think I mentioned it was sort of a tight fit in the hall.
The next division was Western and Day Drinker, the Hal Pat Coulter got for me at Breyerfest, went in to judge stockwork with my working cowhorse entry. As always I waffled between using the running cow, which is on the wrong lead, and the turning right cow, who is turning too much. I went with the running cow and it turned out OK, but could always be better. I am working on it. Day Drinker's tack was made by Pam Perkins, the SMBs were made by Rachel Fail, the puzzle piece saddle pad, skid boots and the Elecktra doll were made by me. 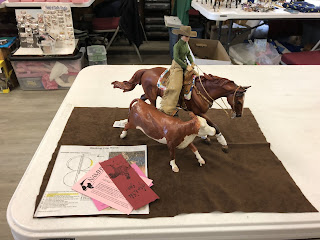 Next up was games and I took off Elecktra's chaps and put Day Drinker in with a Housewife Scurry entry. I was not totally feeling this as I really should have had closed reins but hadn't brought any more bridles. I did knot the reins but it was still iffy to me. 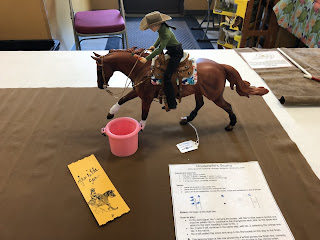 Next I switched dolls for Arena trail, unknotted the reins and set up this poles entry. It was not fantastic. The puzzle piece saddle pad is cool and does have royal blue that matched the doll, but it is not super matched. Plus the tack was still working tack because yesterday was the day of no tack changes. I did also put Day Drinker in Western Pleasure, which I knew was a complete waste of time, but I did it anyway. And he didn't place at all. 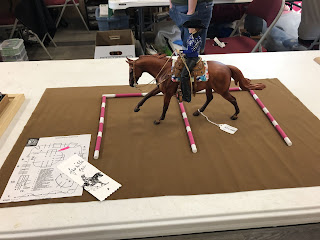 So then I switched the doll back to the Elecktra doll for other Western and put up my extreme cowboy entry. That turned out better. 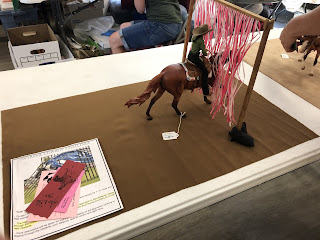 In the end Day Drinker got reserve western champ at his first show out. Next time I may actually bother with some tack changes. Hard to say. 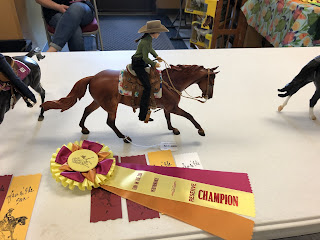 I was still having a good time at Fun in the Sun, though I had only managed to put tiny Abby in one class so far. But the next division was the Summer Fun division and all the creative classes. I was really looking forward to that!

my Starbucks scene got 1st in the Scene class. But your entries are always awesome.