A couple of days of progress

I meant to post about some progress after cutting out and sewing doll clothes on Wednesday, but I forgot to get pictures of the partially dressed dolls. I actually made a lot of progress on Wednesday. I got the rest of the pieces cut out to put together 4 casual English outfits. All with fun breeches. And I managed to talk myself into getting out the sewing machine and I got everything sewn. I was feeling really good about my progress on Wednesday. 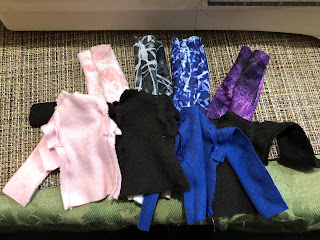 I also started to get 3 casual English dolls dressed. That was as many prepped female bodies as I had left. I got the breeches on them and their shirts, two even got cuffs and collars done. Seriously, so much progress on Wednesday.
Then Thursday I got home and I was fighting myself a bit again. I took a short nap (like 5 minutes) and then remembered the neck relaxer that Ethan got me for my birthday. So I laid on that for 10 minutes and my neck felt better. Still does. I have so much tension in my neck, back and shoulders. I sit on hard chairs and carry a backpack. I'm too old for this crap. But that did help a bit. I should make the neck relaxer part of my regular after school routine.
Anyway, Thursday I meant to finish the 3 casual dolls. I got the cuffs and collar on the third doll, haired all three heads and I got most of the boots on all of them. I still need to do faces, boot bottoms and helmets though. I feel like I should have been able to get these things done, if I had been more productive and focused. I was not however. Maybe my subconscious is afraid to get to 1300. I doubt it though. I am hoping I can get them finished quickly and the last casual doll. Then the super secret (for now) #1300! 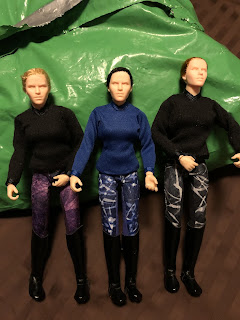 KC's Galloping Gals has had their dolls discounted while the website is down. They also announced that they were not doing any shipping between October 1st and November 1st. I needed to stock up on dolls while they were on sale. This is just one pile of a couple of my many, many recent orders. It amused me. I have a ton more dolls already stashed in the doll drawer. After this group went in I had to take out the ultra suede and I barely got the drawer closed! I have a lot of dolls currently. 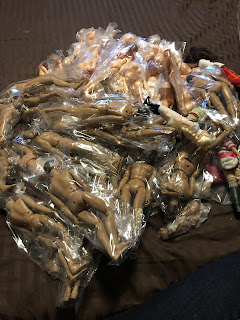 I also had a good mail day the other day. I have been waffling back and forth about whether or not to rejoin Maggie's Monthly Micros. I did it for a few months last year but then decided I really needed to cut out that particular cost. Then in the last few months I have LOVED several of the models that Maggie has come out with. I did manage to get Sprat from Jackie but I have not yet managed a Maple Stirrup. I did see one for sale yesterday, but double the original price is hard for me to talk myself into. So I still don't have one. I did however rejoin at the perfect time. For September, pewter subscribers got an extra horse and a set of wings that fits on either of them. I absolutely adore these teeny tiny horses! 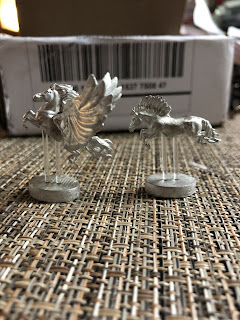 Seriously, so tiny. Hugh was one of Maggie's smaller micros (as far as I know) and Tennessee is way tinier. Both of them being a lot smaller than Moxie. I know there is nothing to show the scale if you guys don't know the other two horses, but trust me, they are insanely small. I need to prep them. And the rest of my unpainted horses. And I need to paint things. So much I need to do... like dust the horse shelves. 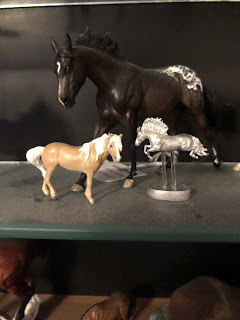 My post About Autism, got a lot of feedback, and I loved it! I also got a bunch of other ideas of posts I can do. Not all of them will work, because I just don't have all of the information to make some of the posts useful, but at the very least I can start with some stories.
This is the story about the time I hollered at a tiny old lady in the laundromat. I don't remember exactly when it was, maybe a year ago, I was in the laundromat on a Tuesday (because I am always in the laundromat on Tuesday) and there was this little old lady in there. Travis was chilling on one of the couches with his little Mario toy and minding his own business. He was making some noise, because he is always making some noise, but it was not super loud. And we were in the laundromat. This little old lady (under 5 feet tall) came around the corner near where I was folding and looked right at Travis and said "oh, that's you? I thought it was a baby. You sound like a baby" and I said leave him alone and I went back to folding, I don't think she heard me because she kept saying things to him from her chair. Now, the way the laundromat is set up there are the two couches at one end and then a whole long row of chairs that stretch all the way to the other end of the very large room. She sat in the chair closest to the couches. I folded and silently told myself I was not going to punch and old lady. And she kept talking. She was mumbling that he was so annoying and just would not shut her mouth. Then she started talking to him again and was asking him who was there with him and why he was there alone. And I went around the corner, made sure she was looking at me and I yelled at her to leave him alone, that I already told her to leave him alone, he was not hurting her or anyone else. She said she was just concerned that he was alone. I said if you were concerned you wouldn't have been being mean to him and I screamed at her to leave him alone again. And I went back to folding. And my internal chant (I will not punch and old lady, I will not punch and old lady).
About a minute later, when I am still shaking and considering calling the owner of the place (who really likes Travis) a random woman I have never met walks around the corner and quietly asks me if I knew the lady. I said no. She asked what she had said and I told her. She huffed and said, "he's not hurting anyone, he's just sitting there playing quietly with his toy! Don't listen to anything that old B@$%& says!" I was surprised and amazed and I told her she was an amazing human being and she gave me a hug and said you're doing a great job, just ignore the haters. I nearly cried in the laundromat.
Not every instance of someone being not-too-nice to Travis has been either that bad or ended in a better way. A lot of things people do leave me feeling like I am being judged by everyone around me and that the judgements are all that I am a terrible mother. The world is a tough place if you are not like everyone else. And if you have the audacity to be the mother of someone that is different, AND you bring them out in public, you are the worst. At least sometimes that is how people make me feel.
This is one very memorable example of how sometimes people can be cruel but often random strangers can save you and make you feel that there are still good people in the world. I absolutely screamed at a tiny old lady in the laundromat. But I showed great restraint and didn't hit her. Though when I mentioned the incident to the owner a week or two later he said I should have called him and he would have taken care of it. I do love that so many people are looking out for Travis.
And now I'll leave you with this awesome picture of Travis. I don't know where he got those sunglasses, but he decided he needed to wear them while he was using the computer. And he looks super cool! 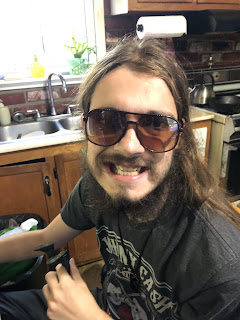 Yes, we can be an army against the haters or uneducated! I will ALWAYS stand up for people who are different and their people. Good on you for exercising restraint - proud of ya!

And Zomigawd I LOVE that purple
Breeches Doll! Fab work...

Those breeches are so fun!!
I've been looking into starting to make some outfits for my dolls. I sew full size clothes, but haven't attempted anything in such a small scale. Did you modify patterns to make your doll clothes, or did you draft them from scratch? =)

Love those breeches! I am totally jealous of the dolls as I would definitely love to wear breeches like that to the stables!