I still have two more divisions of Fall Pony Finals to share pictures of, but it takes lot of extra time to put the photos from the day into the post of the show pics. Yesterday was super busy and I don't have the extra time to try to catch up with my projects. So today it's just updates on a variety of things. Tomorrow I will get back to sharing show photos too.
I started out in the morning adding some matte polish to my tiny Abby to see if it would cut out the tackiness in the paint. It sometimes does. It didn't work this time. The paint wasn't just tacky, it had not even cured. I have no idea why, but it was just not working out. *sigh* 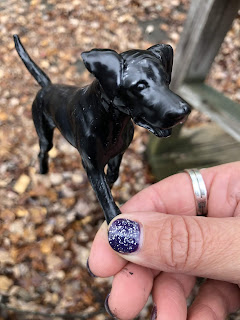 In better news, I got my October micro in from Maggie Bennett. When I saw the spoiler photos I was not sure if I was in love with her or not. And then I saw her in person and she is awesome. I am also grateful that this tiny horse was not available when I was challenged to do the micro Arabian costume. She is even smaller than the horse I dressed. 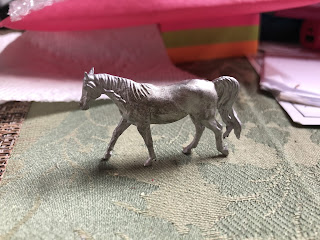 Back to tiny Abby and the not great news about her tacky, uncured paint. I decided I couldn't keep hoping she would cure and I stuck her in a bag with some Easy Off to strip her. Some people are completely against Easy Off, but I wear gloves when I use it and always use it outside. I have never had any issues. Today I also didn't have any results from it. 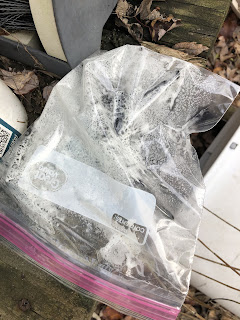 Since I had put quite a lot of matte polish on Abby I used acetone to take it off which I hear that can be bad for the model down the road, but I guess I will cross that bridge if I ever come to it. For now I got off her new, uncured paint and her primer. I glued on an ear I messed up, scrubbed her with dawn dish soap and when she was dry I reprimed her. 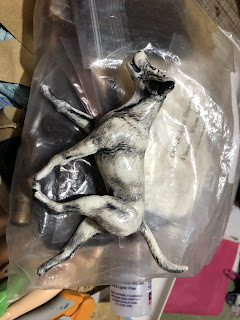 Luckily it was before the rain started. It is supposed to rain for the next 3 days. Of course. 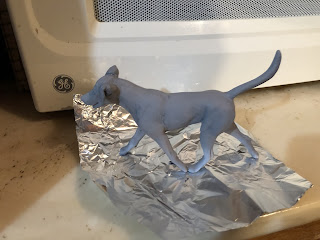 I was hoping to be further than this on her but I did get to the point of drawing on markings. The original tiny Abby that I made for Ethan was done from studying live Abby. She let me move her every which way to exactly map out her markings on the model. She was a good dog. Since I don't have real Abby I used Ethan's tiny Abby to draw the markings on my tiny Abby. I will touch them up as I paint them on. This was actually how I did the original tiny Abby. I drew on the markings in Sharpie and then did both white and black by hand. And I will do it that way again. Hopefully tomorrow I can get the paint out and work on some whites. At least. 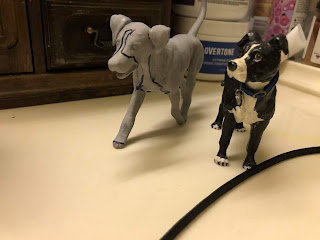 I try not to work after supper, but yesterday I did. I actually got really far on a couple of dolls in a fairly short amount of time. The western pleasure lady needs a hat painted and the smallest amount of bling, but then she will be finished. The cowboy needs a belt, pockets and buttons. And a hat and his chaps put on. So tomorrow I can finish them up quickly. I also realized I have another western pleasure doll I was working on that I forgot about. Oops. So hopefully today I can finish up both of these and the other western pleasure doll. I got a bit behind on things. 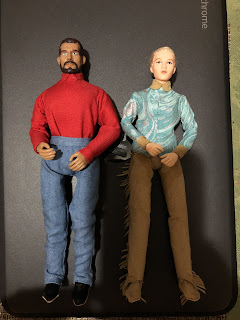 So I said today was about updates. I updated you on tiny Abby on doll stuff and I have an update on the issue with Elecktra and the DMV. She called United Driving school to see about making a road test appointment through them (because that is a thing) and they said that she had to go to the Springfield office (even though there is also a Ludlow office) to register for everything. We already had a plan to get together to do some parking practice, but I said instead I would drive her over there so she could register and be all set. So we did that and she got a ton of information from the woman at the school. Including finding out that the registry might have charged her for the test they didn't let her take and might have put it in as a failed test. The woman at United said she should call just to make sure that that hadn't happened. I said that since we were already in Springfield we should just go to the registry.
Elecktra was nervous since the last time we were there she had such a terrible experience. I told her I would take care of it. When we got in I spoke to the gatekeeper (the guy at the door who asks why you are there and tells you where to go) and he told me to follow the orange line (literally a line or orange rugs). So we got to the counter and Elecktra was still nervous so I said I'd deal with it. I told to the super friendly woman at the counter that we needed to know if Elecktra got charged and I needed to speak to a supervisor. The woman took Elecktra's permit and checked and she had been charged. Not cool. So the road test supervisor is the only one who can remove those charges and conveniently, that was exactly who I needed to talk to. So I went to deal with the supervisor. I explained what had happened and he checked in the computer. He said that the guy had put in the notes that she was not there and then was dropping F-bombs all over the place. Which was not how any of this went down. Elecktra and I explained what happened, again, with Elecktra demonstrating how close the man was and how he waved the book in her face and so on. This went back and forth for a bit and I stayed incredibly calm the whole time and very polite. It was not the supervisor who verbally assaulted Elecktra after all. It took a bit but the supervisor finally got the whole story and realized that what happened really was horrible (at first he said he was there on Friday and didn't hear any of it). He took the charge off of Elecktra's account and said that the man (who he knew who it was immediately when I described him) was going to be reprimanded. He said no matter what there were better ways to deal with the situation. So that was good to hear. It was not immediate and it took a lot of pointing out of things to the supervisor (to get the reprimand, the charge was taken care of quickly) but in the end I fixed it. That situation never should have happened. If I had been there it likely would not have. People need to stop thinking it's OK to abuse their position and pick on young people. I'm glad this got worked out. Hopefully this sort of thing won't happen to anyone else in the future. Now Elecktra has a couple of hours of driving practice with the new school and a newly scheduled road test. Which I can go on. And I will.
So yesterday was weird, but not bad. I didn't get a lot of work done, but I got more work done than I thought I would considering it was laundry day and all the other things we did that were not doll work. Progress is being made. Hopefully soon I can stop freaking out. Three days until TRXC.

LOVE tiny Abby!!! Even though she is incomplete I can still feel her personality!!
Kristine G.