Something in the way

Often I have a plan for my day. I have goals I want to try to reach and when I am trying to get a lot of doll work done before a show, my work days are long and busy. I like to try to have as many dolls and accessories as possible, since a large variety of items makes it more likely that I will have something that people want to buy. So my plan the other day was to come home and sew the 5 doll outfits I had cut out and see if I could possibly manage to get both the cowboys finished. I didn't even come close.
Wednesday was a weird day. I had to proctor the PSATs in the morning and the "time saving" labels turned out to save no time at all. Even people that had given the test many times felt that the new instruction books were incredibly confusing and they felt like idiots. That actually made me feel better. It's good to know that the instructions were confusing for everyone and not just me.
Anyway, when I got home I had my plans but I realized, it being Wednesday, Ethan was probably working on the kitchen. Which meant I didn't have access to the kitchen table to sew. Well, plans change and I just roll with it. All sorts of things used to bother me, not much bothers me anymore. I stopped on my way home to pick up a light switch because the one Ethan had appeared to be broken. The only one the store had, that was mostly what Ethan said we needed, was this lighted one. Which is cool because I have often had trouble finding the kitchen lightswitch in the dark. Not anymore! The problem was this new switch kept blowing fuses as well. Ethan consulted an expert (YouTube) and figured out the problem. This switch is basically the same as the switch in the hallway, though the wiring is for some reason different. He adjusted things and bam! Perfect! So now a bit more work is done on the kitchen and we have a light that can be turned on with a switch. It's cool. 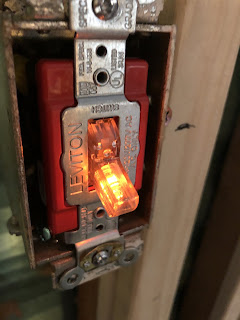 I could have used the delay as an excuse to blow of the day and do nothing, but TRXC is coming. Which means I NEED to do things. So I got out the sewing machine and got most of the sewing done that I was planning on doing. My machine cooperated the whole time and didn't try to eat any fabric. Good times. I didn't get nearly as much done as I planned to but it didn't really bother me. Honestly, sometime in the last couple of years I had a really interesting mind-shift and not much bothers me about anything at all anymore. I have always brought Travis with me most places I go because being able to go out in the community is an important life skill. But it was always a bit nerve wracking because I felt I had to keep a super close eye on him and what if people were mean and so on and so on. I would often want to just go by myself when I went out (not that I went alone all that often) because it would just be easier and less stressful. Now I am usually like, want to go do whatever boring errand I am doing? And Travis likes going out so always says yes and I am fine with it. He doesn't run off, he listens well and if people are mean I will be mean back to them. Sure he sometimes makes weird noises, he's not hurting anyone so leave him alone. Sure he always carries around a giant action figure. Again, not hurting anyone so leave him alone. And actually, there seems to have been a shift with the general public as well. There are a lot of people that make a point to try to engage with Travis just a bit. One of the ladies at the car dealership asked him a week ago what action figure he had. And then Monday when we were there again she noticed he had a different guy and asked about him too. I like when people are nice or even just not a$$@#&%.
Other things that used to bother me were if I planned to work on dolls and anything at all got in the way. Including super tiredness and the slacker-bug (it's totally a thing). Now if I blow off a day to watch Netflix I sort of mentally shrug and tell myself I probably just needed a break. It happens. If I don't get as many dolls as I would like to get done for a big sale (and this year was the year of big sales) I let it go. If I randomly blow off a day of working to go and hang out with Crystal that definitely doesn't bother me. We spent too much time not seeing each other often enough. Work can wait I need to spend time with my people. 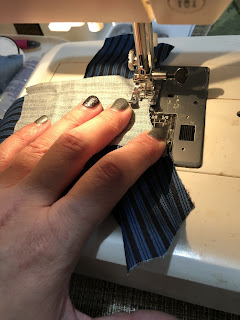 There was a big storm Wednesday night and I guess a lot of trees were down in several towns. East Longmeadow had a 2 hour delay, but for some reason they did not call me to let me know. I waited a long time for Travis's bus and got no answer from the bus company. It was super odd! I finally texted Travis's teacher, who told me about the delay and said she would stop in the office when she got in and let them know that for some reason, Travis was not on the call list. He was last year, not sure why this is different. So I had to call Ludlow High School and tell them of the issue and take a half day. The afternoon will be wonky for sure but now I have time to do some doll work. All the things are falling into place. And even when they don't, I am not going to let it bother me.
Posted by Field of Dolls Studio at 3:00 AM