Thursday night a couple of my newly done nails smeared. That is not supposed to happen. We have no idea why those didn't cure, but I went back to Jackie anyway. So my thumb nails are purple with large and small glitter overlay. Damn. That is how I was picturing the color for ALL my nails when I went. But the small glitter overlay that made a cool galaxy type finish over the black polish last time did something that looks more like 80's frosted lipstick, this time. I have some purple and one red nail and the glitter on them makes them all look like they are the same color. So next time we know which glitter to use. Anyway, I went back to see Jackie yesterday just to get my thumbs redone and have a coffee and a short visit. Then I came home to work on finishing up the western pleasure dolls I have been working on. I managed to get 3 all finished but the one photo I took was blurry. I didn't notice until the dolls had already been tagged and packed up. Grr. 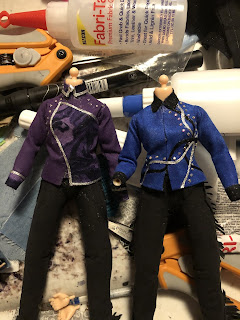 I got this photo from Alex, Travis's para, yesterday. He definitely looks like he is having a good time decorating his pumpkin. When he brought it home he wanted to put it in his room. I said he should leave it on the kitchen table. Otherwise I know we will forget about it and end up with rotten pumpkin in his room. The other thing from yesterday is Travis sent me an email and said he wanted to go Trick or Treating for candy. He can't eat the candy, it's cold outside at night and he's grown so people will often be mean. I am trying to see if he would be OK with an alternative, that still gets him candy. I think the candy is the part he wants the most. But really, grr. 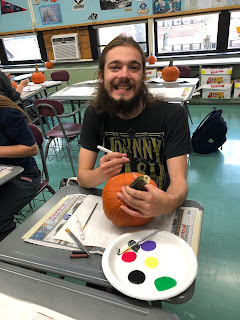 Also yesterday was Elecktra's road test. She was already nervous because everyone is nervous for their road test. She and her friend went, because the friend has the ebrake in the right place in her car. Well, her entire 3:00 group got skipped and the people at the registry insisted they called them and none of them were there. They insisted they had been there the whole time and so did another couple of people. So rude woman went to check the tape and some really horrible man (maybe one of the testers, I have no idea) came out and got in Elecktra's face and was screaming at her, made her read out loud the portion in the driving manual that says you need to be on time and then when she said he was rude and she was leaving he followed her and her friend out to continue screaming insults at her! She called me incredibly upset and I got off the phone, with a description of the guy, to see if I could talk to a supervisor and lodge a complaint. There was NO call for him to be screaming at her, getting in her face and DEFINITELY not for him to follow them out!
I was super mad and more mad when I discovered you can't call the registry and talk to a person. You can only choose options from their menu and all of them are for specific services. You also can't go on the website and send an email about this sort of nonsense because the website is the same as the phone system. So if I went down there maybe I could lodge a complaint about harassment, but most likely not because of the way the registry works. And because the earliest I could go is Monday, I don't know the man's name and so on. I'm pissed though, grr. I don't think that would have happened if I had been there. Elecktra and her friend feel that she was singled out because the lady with the other kid that was there for his test looked a lot older. I said next time I will go just to be the 40 year old woman who is on her side if any crap like that happens again. That is beyond messed up. Ethan was also pretty mad about it when I told him the story. These things should not happen. If you hate your job, get another, don't freak out at people for no reason.
Today is the Fall Pony Finals and I am actually leaving to head to the show in about 10 minutes. But I didn't have a post for today already written and I don't want to let you guys down. I am hoping to get a bunch of photos today so I have some more post material for this week. Plus I will hopefully have doll and doll accessory project updates. TRXC is coming. Just one week left.
Posted by Field of Dolls Studio at 4:33 AM

That is harassment and a reason to call your local state representative. You going through those channels (or local media - TV, newspaper) may get more of a good response than anything else.